Back in February, the first single from Depeche Mode‘s latest full-length, Sounds of the Universe, wowed viewers with an outstanding, cinematic music video. “Wrong“, directed by frequent Feist collaborator, Patrick Daughters, is a sinister and panicked ride as a man, bound, gagged, and eerily masked, struggles to free himself from a moving car. Needless to say, it was a crazy video, and a hell of a way to launch an album. The band’s second single, “Peace”, follows “Wrong”‘s lead with an emotionally-charged and no less cinematic video.

Directed by creative team Jonas & FranÃ§ois, “Peace” marks a major departure in their style of music videos. The French duo are best known for their graphic design oriented digital animation transposed on live action footage, as seen in videos for Justice’s “D.A.N.C.E.“, Kanye’s “Good Life” and Madonna’s “4 Minutes“. Unlike those pop-centric videos, “Peace” doesn’t look to contain a drop of CGI. Instead, it’s a wordless narrative, gorgeously shot, of a female soldier returning to civilian life and struggling with emotional readjustment

In many ways, “Peace” is a modern rendition of themes from the classic film, The Best Years of Our Lives, but in this version, the soldier doesn’t return to glitzy 1940’s America, but to the modern destitution of an Eastern European country and a society where women share the pain of men.

“Peace” was filmed on location in Romania, giving the video a distinctly worn and lived-in look. The aged 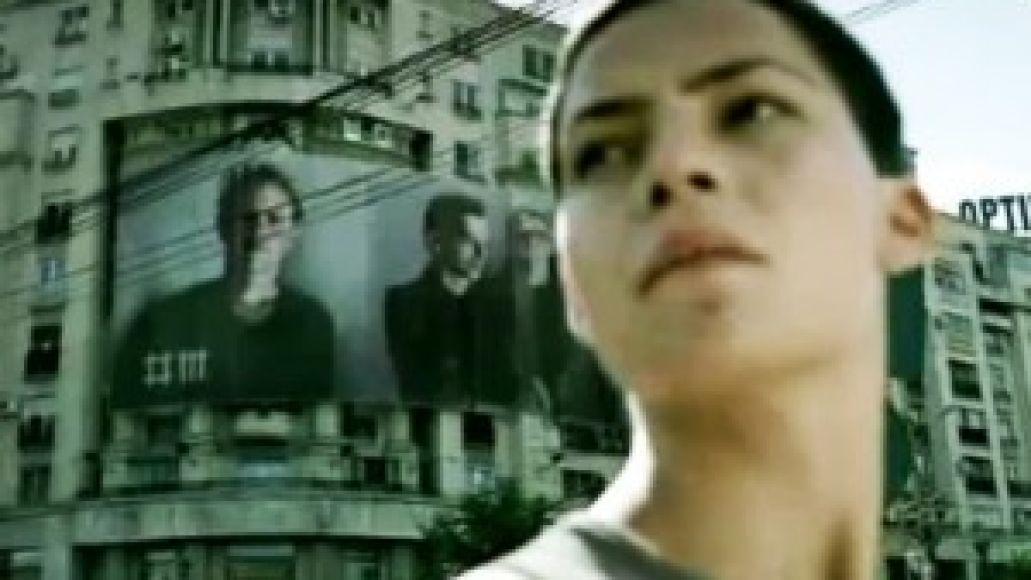 urban environments used in the video make the bleakness of the soldier’s return seem all the more difficult as she struggles to come to terms with her new life. Maria Dinulescu, a Romanian actress, stars and delivers a powerful performance with nothing but body language and facial expressions. Her androgyny as a soldier makes her an alien in the city. She is neither the sexualized femininity of the woman in the car she hitches a ride with, nor the maternal comfort of the aging women at the restaurant she works in. The video chronicles the soldier as an open wound aching to close, a theme that aptly compliments Depeche Mode’s electronic ballad for comfort and catharsis.

Jonas & FranÃ§ois have clearly asserted that their creative prowess span more than fun animations and pop sensibility. Their tremendous shots, in time to Depeche Mode’s strobing synths and powerful chorus of “peace will come to me” combine with the honesty of Dinulescu’s acting to make not just a music video, but a powerful short film. The video’s shots aren’t consistently in sequential order, matching the soldier’s fragmented emotions. As a result of this, the opening and closing shots of the soldier riding in the back of a jeep in her fatigues aren’t necessarily her departure from the military, but perhaps a return to it after being unable to adjust to a normal life.

Music videos of this emotional weight aren’t made nearly enough. The band’s only presence in the video is a kid wearing one of their t-shirts and a poster of them in the background during another scene. The inclusion is subtle and smart, not interrupting the narration with an obligatory appearance or lip sync. In “Peace”, Depeche Mode poured their fun money into a worthy artistic cause and let their song take the spotlight.