After what will go down as a stellar spectacle of a debut, Conan O’Brien topped it all off with a lil’ sonic love from Pearl Jam. In some respects, it was a killer closer to an equally killer episode. For the first time in nearly two decades, The Tonight Show is officially back. We’re not alone in our sentiments, either. The audience delivered some adrenalized enthusiasm, even without the prompts, and one thing was certain in the eyes of everyone watching: Conan is the man and we couldn’t be happier.

So, what about our Seattle boys? 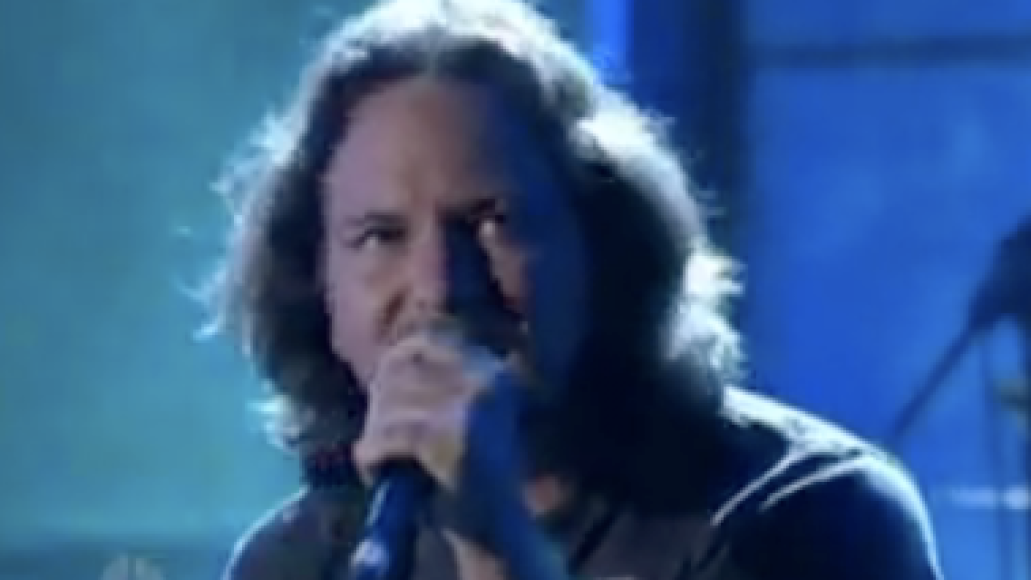 Hot off shocking and pissing off fans, Eddie Vedder and team closed the night with new single, “Get Some”, which will be available off of this fall’s Target-exclusive, Backspacer. Once Conan introduced the fellas, with the new album in hand (maybe he’ll leak it?), Vedder swiveled about on the mic stand and coughed into the mic with a scruffy cadence that marched the single forward. While the vocals could have been mixed in better (hopefully the new Tonight Show set has a volume knob), the band kept things tight and even.

The real star here was Matt Cameron, who kept impeccable timing with the song’s stops and starts. Bassist Jeff Ament, clearly feeling it again, hearkened back to his grunge roots and bounced around like a teenager from 1989. Meanwhile, “other” guitarist Stone Gossard hid behind a head of shaggy hair, while guitarist Mike McCready managed to squeeze in a wand-like solo before the big finish.

It’s a shame fans are kicking up a storm over the Target “debacle,” and calling the group a “sell out” so prematurely. Really, if selling out means shooting the shit (literally) with Cameron Crowe and selling albums in the one store that’ll still be around come autumn, then by all means, sign me up, too.

We’re still with you, guys. That goes for you, too, Conan! Can’t wait for tonight.

Watch: Pearl Jam "Get Some" on Conan