I was made aware of Pet Ghost Project the way nearly all good music gets noticed, by being passed from one person with musical credibility to another. If you trust a man’s taste in tunes, you could easily pass time in a foxhole beside him, guarding your lives. In this way, I knew I’d appreciate Pet Ghost Project even before sitting down with speakers and a pen. However, I wasn’t prepared to be enthusiastic about it, but here I am asking you to, “trust me!”, as I pass a band your way.

It’s times like these that sitting down and banging out words about music doesn’t seem, well… trivial. Think back to the first time you heard Neutral Milk Hotel and the ways in which NMH manipulated sound, distorted it, arranged it and bled it. Those sounds were monuments in the ’90s. I wish I had written about Neutral Milk Hotel at the time.

Justin Stivers, the brains and brawn of Pet Ghost Project, owes his buzz and chords to Neutral Milk Hotel and the rest of Elephant 6. I am not prepared to raise him up to the level of his influences, but raising him above the filth labeled “music”, which was spoon fed to us for most of this year, is obligatory. Instead of writing a “Listen” concerning Pet Ghost Project, I’d rather be writing a review of a record backed by a PR team and with a limited edition pressing of 1000 on blue vinyl about Pet Ghost Project.

Sitting back in your lumbar supporting office chair, you’re questioning my trustworthiness and taste. With a 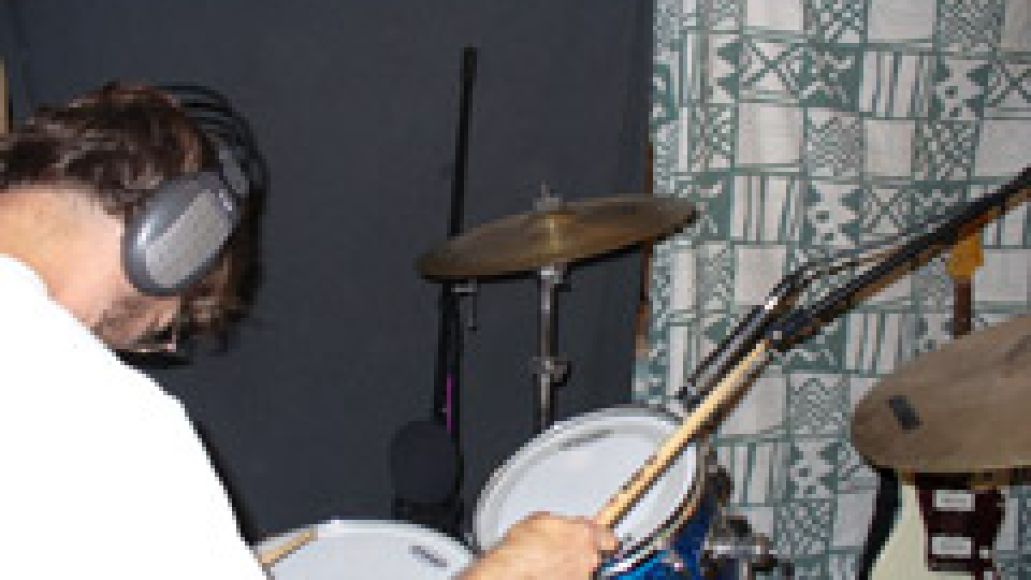 glut of faceless typists across the internet telling you what to listen to, trusting the credibility of this writer when you do not know the content of his musical character takes stones. Breathe deep. You don’t have to have stones because Pet Ghost Project is giving away its music. The Great Satisfaction, Cheer Up ~ It’s Raining, and the Idiot Brain/Genius Heart EP, which was just released within the last month, are free to download (minus the instrumental The Wordless Conversation). Now, all you have to ask yourself is if you want to click a few links.

I’ll help you out further. Since listening to three full albums to decide if you like a band seems daunting, I’ll tell you which songs to listen to first. Listen to “Age of Automatics” from Cheer Up. It starts out straightforward enough with “pop sensibility” – the good kind – and metallic guitar exclamations, with muted vocals accompanying. Before long, a voice screams from what sounds like the bathtub. By the three minute mark, the song has morphed into an acoustic guitar driven folk-rock song (if not for the synth dressing it up). It reminds me of the stylings of Arizona (minus the synth), if only slightly. As for “Consequence of Thinking”, it fits nicely on IB/GH. The Idiot Brain/Genius Heart EP is a departure from Cheer Up that tries less to be an indie rock record in the popular vein, and pushes more for fuzz dripping prog-shoegazer. Not wanting to be left out, if you look for it, you can find power pop shyly hanging around as well.

As I have written before, it’s hard to throw in the kitchen sink and pull off a listenable record. Not only does Pet Ghost Project pull it off, Justin Stivers does so as a one man band. Stivers (as Pet Ghost Project) continues to reach and grasp for more and more … someone needs to wake up and sign this guy.

Check Out:
“Age of Automatics”
“Consequence of Thinking”