If you’ve been avoiding all the reunion hoopla surrounding No Doubt lately, you might want to reconsider your summer plans. If their show at the Verizon Amphitheater in St. Louis, MO this past Wednesday is any indication of what’s to come, it may be time to give the Tragic Kingdom ska-poppers a second chance. After all, they deserve it.

Not only were the California brats ready to deliver a raucous, ska-filled set, but they were happy to share the festivities with friends. Thus, openers Paramore and  Bedouin Soundclash tagged along for the summer reunion fiesta — for better and worse.

Bedouin Soundclash is a choice decision for the bill. In retrospect, the Canadian dub-band could have opened for No Doubt 15 years ago, probably pre-Tragic Kingdom, too. The Toronto act sports a typical reggae sound, but singer Jay Malinowski’s bitter, raspy vocals edge it out some. Songs “When The Night Feels My Song” and “12:59 Lullaby” conjure up beach memories, and on Wednesday, it enveloped the crowd with a flavor that set the tone, though only for 25 minutes. 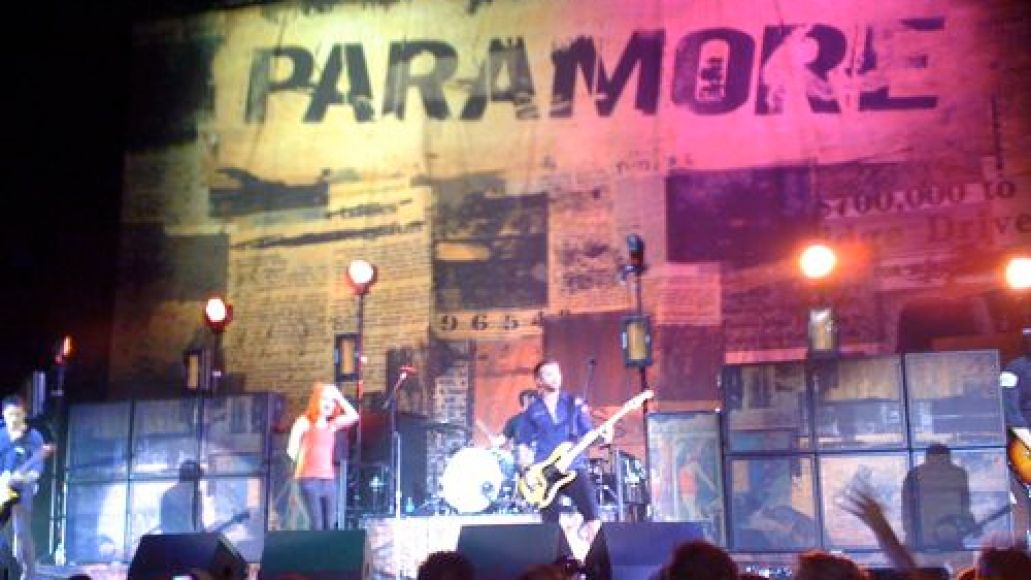 The holiday didn’t last long, as Paramore stepped up and aptly performed the same song for nearly 45 minutes. While the band’s presence helped boost ticket sales, and probably accounted for 80% of the female demographic, they stuck out like a sore thumb. Hayley Williams and co. lack the creative imagination that, frankly, both bands on the bill carry. To their credit, however, the band ran through all of their radio hits, with a few new songs mixed in, and did get the crowd amped up for the return of No Doubt. But really, is that hard when everyone’s waiting eagerly?

No, it’s not. This crowd came for No Doubt, and that’s exactly what they received. After they revealed themselves from behind a giant cliché, white curtain, the now sextet launched headlong into Tragic Kingdom‘s classic opener, “Spiderwebs”. Immediately, the crowd responded, bouncing and giving into Gwen Stefani’s every beckon and call.

It is St. Louis though, and after a quick romp through “Hella Good” and the slow down reggae jam, “Underneath It All”, Stefani started to fall victim to the 91% humidity that clogged the night air. “This will for sure be the sweatiest No Doubt show of the tour,” she exclaimed. “But we love getting sticky, it makes us feel like part of the crowd.” 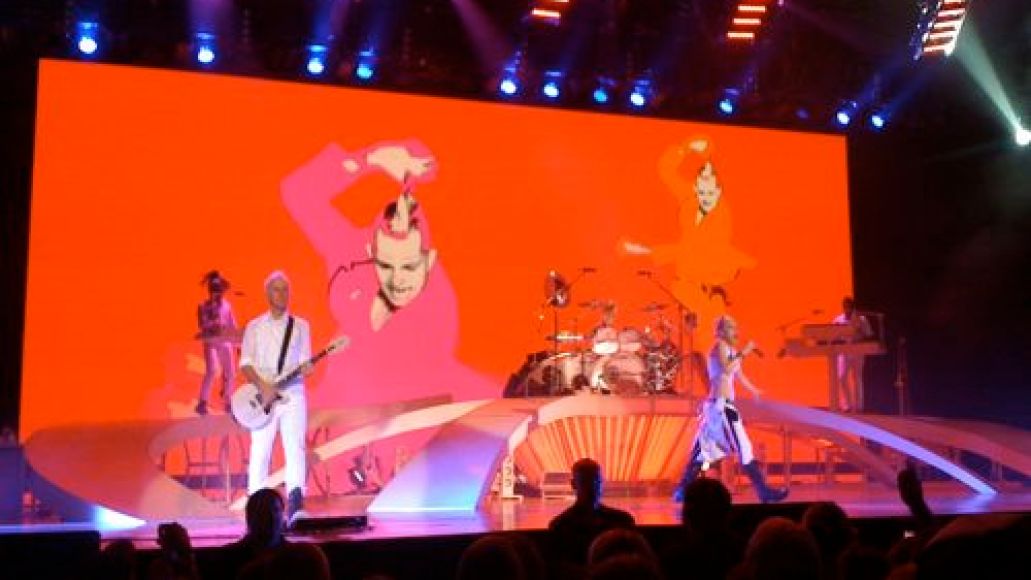 The ten dollar crowd couldn’t be happier. The stage set up alone provided enough amusement for the cheap-as-hell lawn admission price. With custom videos and computer graphics supporting every song, including James Bond-like clips of the group, things looked dazzling and flashy. You almost wanted to bite into it all. Then there’s the fashion sensibilities, too.

After a quick instrumental cover of the Skatalites’ “Guns of Navarone”, Stefani reemerged on stage in a new checkered outfit, continuing on the style of the night, which seemed fitting for “New”. While starting slow, the Return of Saturn favorite quickly turned into a rocking moment, thanks to Tom Dumonts well above average guitar work. As the band jumped into “Running”, some of the younger fans in the crowd were introduced to a memorial video of what No Doubt used to be, years before the fame and fortune. This was a surprise, especially given the years and years of cataloged drama. Though in a sense, the video seemed to be a message to the longtime fans in the crowd, that they still realize who they are and where they came from. 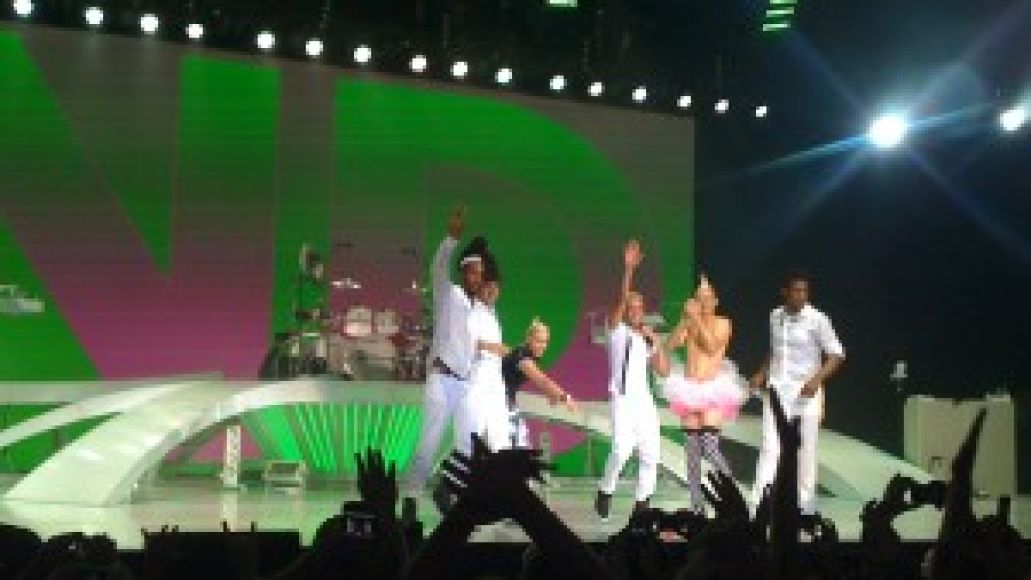 That doesn’t mean they haven’t moved on. During “Different People”, Stefani found time to introduce all of her touring band, in addition to thanking the immense lawn crowd. She kept a close attention to her audience, and throughout the night, Stefani had been conducting a search for her favorite fan out of 20,000 fans in attendance. Shortly before the encore, her search came to a close. She spotted an 11-year old, dressed exactly as she was. Normally this kind of thing feels planned, or planted even, but the genuine tears in the child’s eyes, or the exuberant joy on Stefani’s face, made it feel anything but that.

Naturally, there was an encore. In addition to more tunes, there was also another wardrobe switch. This time around, Stefani donned some military garb, and drummer Adrian Young wore nothing but his tighty whities and a pink tutu. This all led to a chilled out version of “Rock Steady”, before inviting openers Paramore and Bedouin Soundclash to the stage for a thundering cover of Adam Ant’s “Stand and Deliver”. Just in case the crowd had forgotten — they hadn’t — the band launched into one more Tragic Kingdom classic, “Sunday Morning”. Summer’s been here for weeks now, months almost, but No Doubt set things on the right path for St. Louis. This is one hell of a party, and you’re a fool to miss it. 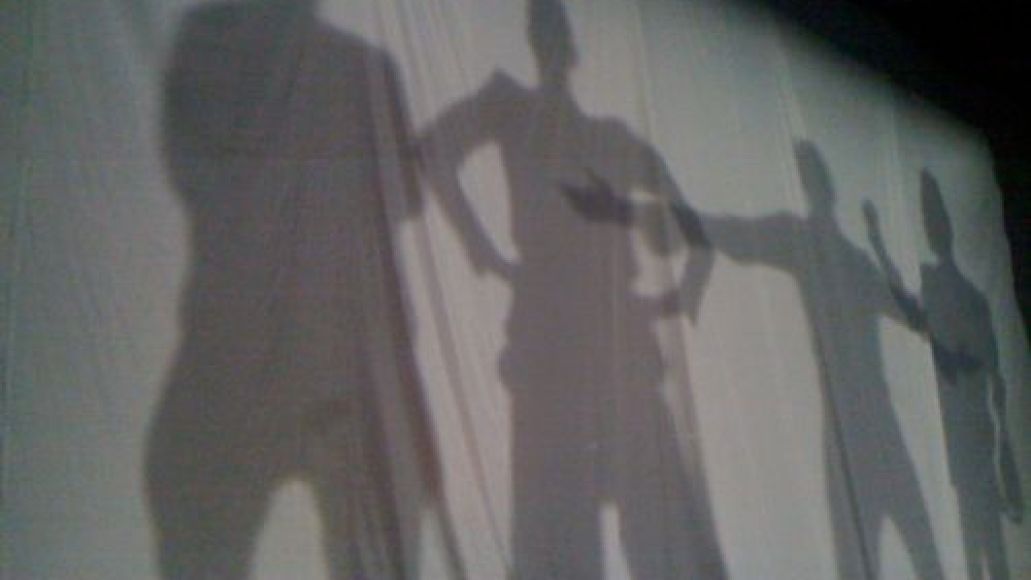 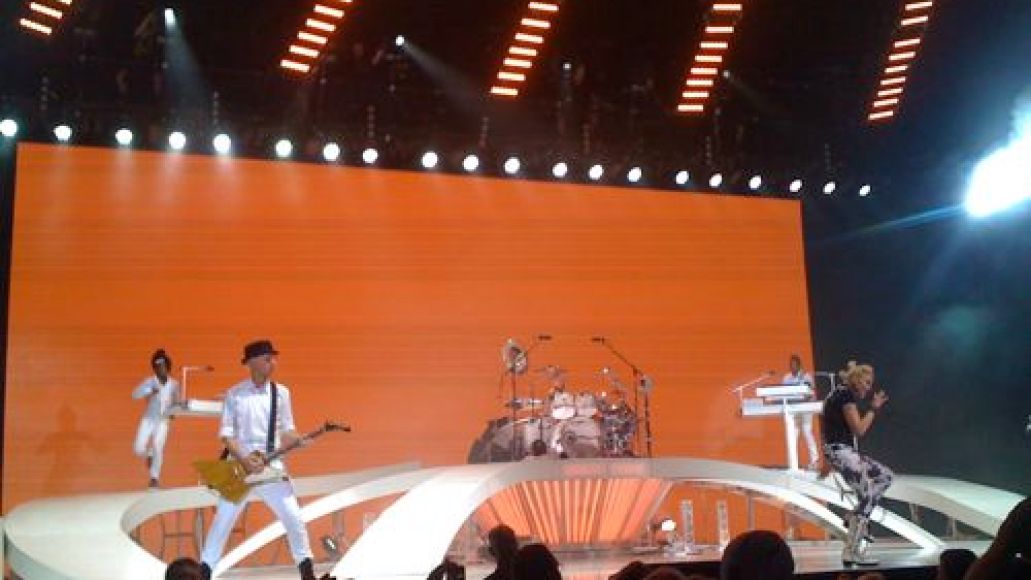 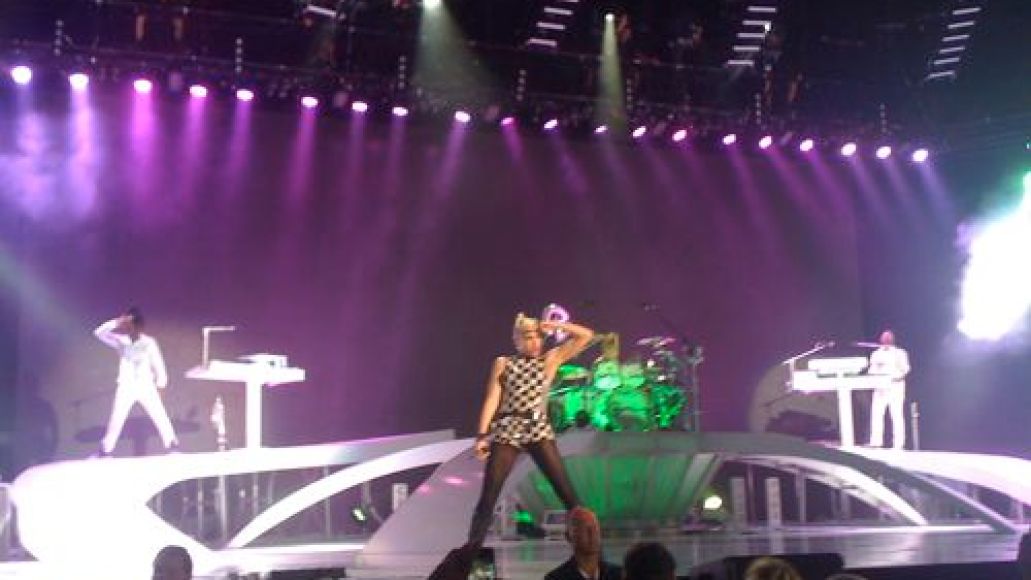