Kristallnacht, or the Night of Broken Glass, was a horrific two day anti-Jewish riot in Nazi Germany, in November of 1938. While there had been plenty of anti-Jewish laws on the books in Germany at the time, many historians consider this violent event, in which 91 Jews were killed (according to official German reports of the incident), to be one of the first steps of the Nazis “Final Solution”, the planned genocide of European Jews.

But Kristallnacht is one of his greatest accomplishments, a perfect fusion of art and history, emotion and memory. The composition opens with “Shtetl (Ghetto Life)”, a subtle, anxious klezmer swoon, which is intermittently broken into by fuzzy yet fervent snippets of audio samples of German shouted speeches and rallies. This paranoiac feel is an attempt to recreate the manner in which German Jews like Herschel Grynszpan lived their daily lives.

Grynszpan’s family were Polish Jews who had settled in Germany. Herschel himself had been sent to live with an uncle in Paris, while the rest of the family remained in Germany as the conditions got worse and worse for Jews. According to several reports, he received a postcard from his sister, telling him of the situation back home. Not a week later, Herschel walked into the German embassy in France, walked into diplomat Ernst vom Rath’s office, and fired three bullets into the man’s chest. Grynszpan was immediately captured, but the assassination led to a horrific event.

The second part of Zorn’s Kristallnacht, entitled “Never Again”, is a difficult thing to listen to. Zorn admits this in the liner notes to the piece, as it “contains high frequency extremes at the limits of human hearing and beyond, which may cause nausea, headaches and ringing in the ears”. Sections of the piece seem to be thousands of layers of glass shattering.

“Gahelet (Embers)” follows, a hollow, broken soundscape, full of far-away winds and howls. Not only were 91 Jews killed during Kristallnacht, but anywhere up to 30,000 were arrested and sent to concentration camps, not to mention the destruction of property and the ruins that were left behind. “Gahelet” perfectly captures the point of view of someone attempting to walk through the streets where the brutality happened, walking on shattered glass, seeing the remnants of so many lives. 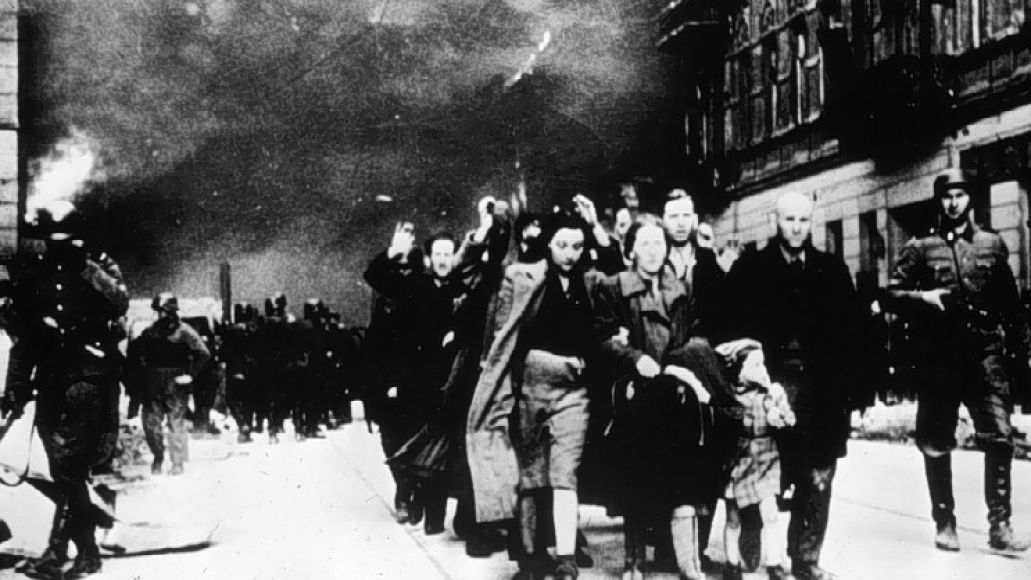 “Barzel (Iron Fist)” is downright angry, full of howling electronics, thundering drums and some sort of buried vocal. But after two minutes of this rage, “Gariin (Nucleus – The New Settlement)” breaks in, sparse, marching drums eventually joined by loping, distorted guitar. Hints of klezmer remain in the rhythm, but there’s something that isn’t the same anymore. The instrumentation, the tones are changed, though there is an attempt to remain grounded in the traditional, echoing Zorn’s own attempt to hold onto and recognize the past while also venturing into the new and unknown.