Whether you think this issue is childish or grounded, Trent Reznor‘s detachment from social networking site Twitter in June 2009 stirred a pot that still feels fresh from the blacksmith. In recent years, sites like MySpace, Twitter and YouTube have become blessings and curses as they all simultaneously connect artists to fans while expanding the idea of public humiliation on both sides.

Ironically many fight to avoid censorship on the internet, only to turn around and berate others with cruelty and anonymity; privacy is championed and challenged by all involved, and morons of the world have an outlet to chase away artists nice enough to share personal quips and create a dialogue with fans. In this era of instant 140-character gratification, all are open to motivated and distasteful detractors. This trait of networking caused Reznor to disconnect from Twitter and similar ilk with only a fraction of insight to go on:

I will be tuning out of the social networking sites, because at the end of the day it’s now doing more harm than good in the bigger picture and the experiment seems to have yielded a result.

Reznor’s Twitter page collected over 600,000 regular visitors, which means he cut off a digital limb and dropped it in the soup pot. Results include impostors on Twitter posing as Reznor, a platform for their trivial thought broadcasts both mocking and otherwise — an illustration of those who have no life, who fuel or mimic said “idiots.” Trent Reznor has now recently posted a letter at the forums on nin.com, a location where it is suspected he will remain active in terms of constant updates sans social networking. The letter contains confirmation of Nine Inch Nails’ full band retiring from touring beyond NIN/JA 2009, and further insight to Reznor’s disdain for blog trolls. 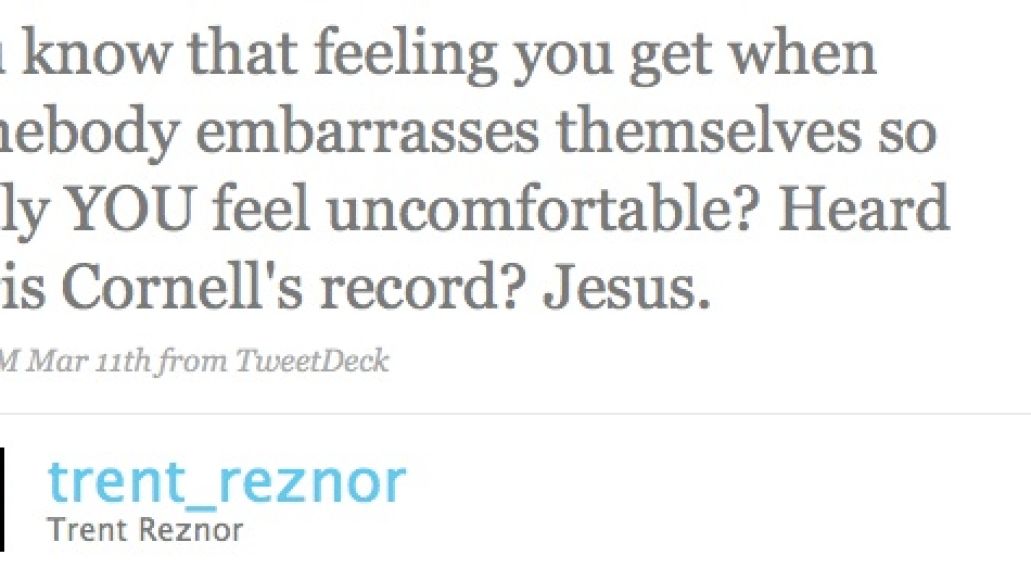 In short, Reznor used Twitter to communicate daily with fans and media. During April of 2009, he announced an engagement to Mariqueen Maandig of the band West Indian Girl that incited hateful comments and racist attacks from “a faction of troublemakers” whom he blocked before taking a brief hiatus from the site. After multiple failed attempts to have Twitter’s staff resolve the issue altogether, Reznor eventually left Twitter for good, deleting his account come summer.

Another issue appeared in the form of an immature comment made by @AndreaUrbanFox that reads:

someone got balls at last! Hey, can I have some of that #Eric money? The dude’s dead, he doesn’t need it lol

This is in reference to Reznor having attempted to raise funds for CNN newscaster Veronica De La Cruz’s now late brother Eric who was in ill health for a time. The open-forum, stream of consciousness format of Twitter obliterates both typical website moderation and common sense, and though most people like myself continually laud our rights to free speech I will be the first to quote Peter Parker’s beloved Uncle Ben here: “With great power comes great responsibility.” People are cruel creatures, and journalists like ourselves will not hesitate to remind others how easy it is to get wrapped up in frustration from anonymous bloggers who cause worthless aggravation without respect to anyone — we just try to grin and bear it (or sic “Captain Asshole” on you).

Trent Reznor has been doling out fan service for a long time now, setting the stage for artists like Saul Williams to later embrace internet post-CD; he is an industrial music king and continually experiments with fan-made remixes. While Reznor is no stranger to leaving temporarily in the past, this instance in which feels sincere due to certain extenuating circumstances.  Regardless of which side you take as to the maturity or lack thereof in Reznor’s lashing out at and subsequent separation from Twitter, rest assured he will still be lingering on nin.com somewhere and we congratulate him on his engagement.

The question remains: Should Reznor return to Twitter’s borderless blogs or the like? Should he stick with NIN forums to address strictly fans, allowing various websites to make announcements for him (possibly twisting the words a bit)? Did Reznor overreact, or was this move an appropriate response to unnecessary insults? Read the letters and be the judge.

The Reznor-Twitter Saga: Blogs Without Borders