In between all of the sets (both good and bad), the memorable fans, and the endless merchandise, there was the interviews. Taking up where last year’s casual Q&A with Dragonforce bassist Frederic Leclercq left off, we here at CoS were lucky enough to speak with Slayer drummer Dave Lombardo and Trivium guitarist Corey Beaulieu. In passing, Beaulieu was kind enough to lend a little insight into feelings about the tour and where he would like to visit in the near future:

“We like headlining our own tour because we get to play longer sets. [Mayhem Festival] is fun though, because it opens us up to a bigger audience who [sic] might’ve came to see another band and said, ‘These guys rock too!’.”

“…we’ve pretty much played all over here [in North America], but I’d love to play in Alaska or Hawaii. Whenever we play places like that, people are always happy we came.”

Though nothing is currently set in stone, we are certain that Trivium will pop up in Europe after Mayhem ends. Quite possibly afterward, the band may arrive back in the states before putting writing into the studio late next year. 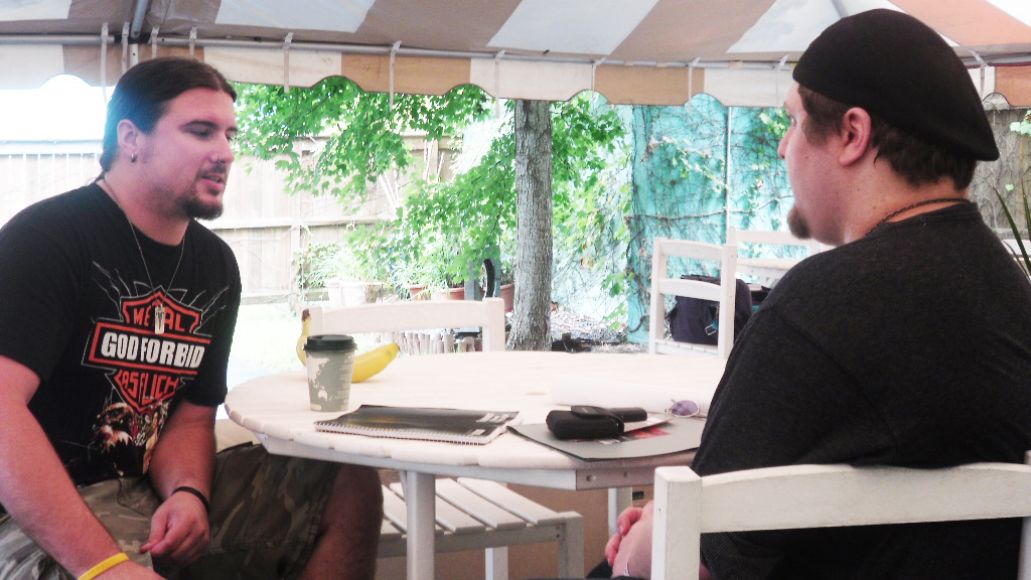 Shortly thereafter liaison Amanda Moore escorted us to meet with Slayer’s Dave Lombardo, the drummer since its inception (save two albums); he has also been the go-to drummer for side projects like Mike Patton outfit Fantomas.

The “king of double bass” had spoken to press recently regarding changes to his drum kit, so CoS was curious about the trading of toms for cymbals translating to live performance. Lombardo had much to say on the matter:

“It’s actually all fallen into place really easily, ’cause I always had kind of this ability to go from one drum set size to another but I kept the Slayer drums in it’s own…like, ‘This is a Slayer kit.’  [For example] on Fantomas… I’d remove the higher toms and add bongos, and you know add shakers, bells, whistles, whatnot right?  So… this [Slayer] drum kit…I  removed two other drums which for me was a big thing because I’d never done that before, and I think it kind of opened me up to a different approach to my drumming like coming up with different kinds of drum rolls.  I think it’s exciting, I think it turned out really good I’m enjoying it.”

Elaborating on the cymbal changes in the new Slayer record, World Painted Blood, Lombardo was concerned about tone and “adding more dimension”:

“…I’ll go to another, and it’ll go lower [imitates cymbal ride noise] because I was noticing on the demo tapes we were doing at rehearsal before we went into the studio…I was like, “Man, I was just on the ride the entire time’ and there’s just no variety, no changes.  There was changes in music like the guitar playing, but I wasn’t changing [tones]. 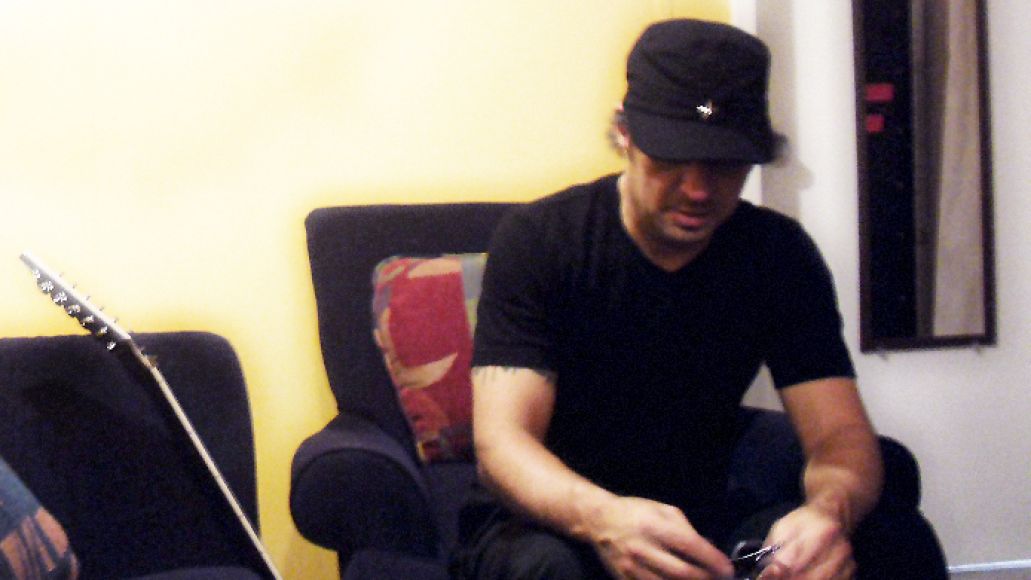 We asked of future plans with Patton, and though the two have kept in touch, Lombardo claims he would like to work with the latter by late 2010, that is, if plans with Faith No More subside. So, keep your eyes peeled and your fingers crossed for the new Fantomas. On touring with Slayer, there are plans to visit Australia, Japan and Europe post-Mayhem. In lieu of Slayer’s future musical experimentations, Lombardo dispensed his words of wisdom:

“There are parameters, certain parameters…to keep the purity of the band. You can’t venture too far out, because then you know… the creature will deform, and eventually die. We’re here to write, perform, create and entertain… who enjoy listening to music, ’cause see I’m a listener. I listen to music, I listen to what bands are doing and I get into what they do.”

To those budding musicians out there, advice from a master as well:

“Even if it’s just you, playing with a couple friends and jamming, that’s the fun of it you know?  There are some people of course that have made a business out of it… some kids get discouraged when they reach a certain age, guys [when] they don’t make it to the top.  You know what, it doesn’t matter, just play whether it’s in the garage with your friends, at a bar, at your friend’s party, whatever — it’s all about just having fun.”

Between supporting the new record and co-headlining alongside Manson for Mayhem Festival 2009, Lombardo has practically been going non-stop all summer this year — yet he remains on point and energetic as ever before, refusing to “take a breather”:

“I don’t know, vacation really isn’t on my mind. I’m filling in [any remaining] gaps and time with other projects, right now I have a video, a drum solo for a drum song I need to write for [skateboarder] Jeff Rowley. it’s going to be for Volcom Clothing. I’m really excited about that.  Hopefully, a soundtrack with producer Dave Sardy.”

From soundtracks to skateboards, the man does not stop, but that’s admirable. If this year’s Mayhem Festival is any indication, Slayer remains both relevant and in-demand, which means Lombardo has his work cut out for him already. With talent like this, it only makes us hungrier for what’s to come in future days at Mayhem. 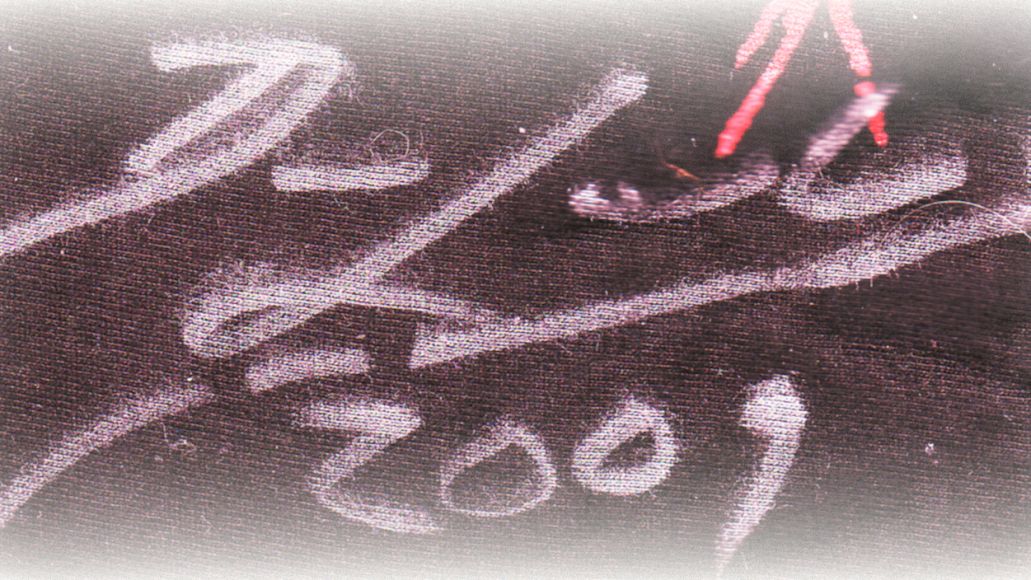 Thanks to Corey Beaulieu and Dave Lombardo for taking time out to speak with CoS, and a special thanks to Amanda Moore and Slayer tour manager Jim Caroccio for arranging interviews.

A Day at Mayhem Festival: A Chat with Trivium and Slayer