To borrow a phrase from staff writer Dan Caffrey, The House of Blues is seriously the Chili’s of music venues. It doesn’t matter where you go in this country, any venue in their caliber has the same decor, the same goofy stuff on the walls, the same wooden staircases and even the same overpriced beer that’s really not worth it. There’s not a speck of difference here in Chicago. In fact, since this the city where the “electric blues” started, the House of Blues Chicago goes that extra mile to make it as close to “authentic” as possible. Given the prefab elegance of the House of Blues, once in a while they chime in with some pretty stellar shows. Last night’s heavier than hell performance featured Sweden’s Sister Sin (which I missed due to the CTA), Dallas, Texas’ very own Reverend Horton Heat, and the English legends themselves, MotÃ¶rhead. A line up like that couldn’t deter even the most cynical fan alive. Say what you want about the venue, I already did, but the show as they say must always go on.

Things got off to a pretty hectic start. The Chicago natives packed the gills of the concert hall, complete with leather jackets, cans of booze, denim vests and windmills of long hair. If this were anywhere but here, it’d be the dingiest biker bar this side of the Midwest. For all intensive purposes however, only the shell of that bar remained as I stood in the lower section of the concert hall. Within ten minutes, Reverend Horton Heat kickstarted the party once again with a rip roaring version of “Reverend Horton Heat’s Big Blue Car”. One thing that doesn’t really need to be said but must be said anyway is that guitarist/singer Jim Heath can play guitar like no other. Combining his love of the stories of country and the technicality of rock and roll, this man can put any heavy metal shredder to shame. Backing him up were longtime bassist Jimbo Wallace and recently joined drummer Paul Simmons. Without a doubt, this Texas trio banged together some serious noise for the Chicago extravaganza. 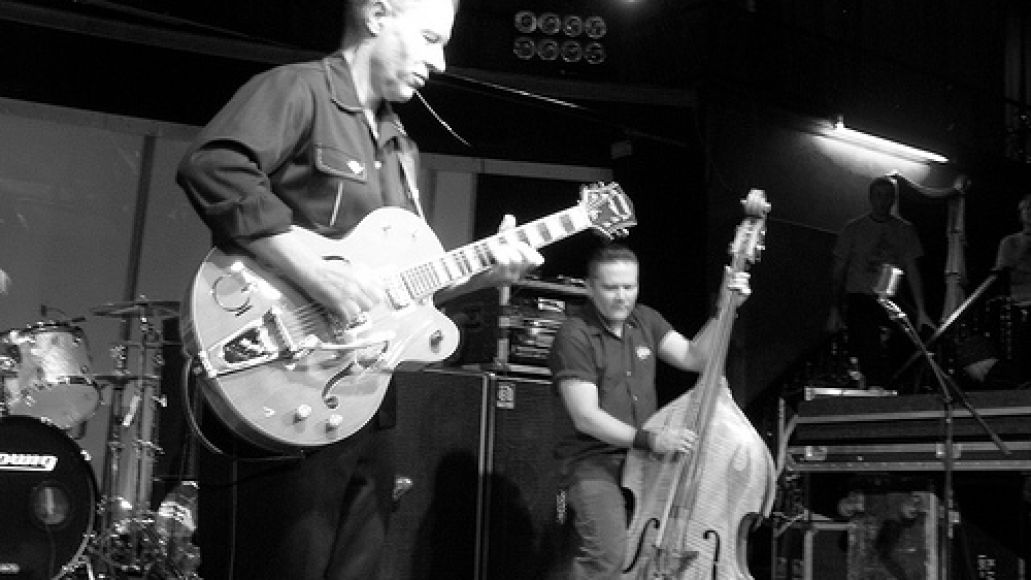 The Heat continued with a wicked stomping version of “I’m Mad” which segued into a batch of brand new tunes. Heath quipped to the audience, “Now I’m gonna warn ya, it’s a lil’ bit country. You okay with that?” Some idiots booed while some others cheered in advance. For those unfortunate souls who booed, Heath got the last laugh because for starters, their newer material kicked boatloads of ass. Country tinged punk rock tunes “Ain’t No Saguaro In Texas” (about the tall cacti that are famously portrayed in Texas), the face ripping “Drinkin’ And Smokin’ Cigarettes” and the sarcastic, instant classic “Please Don’t Take The Baby To The Liquor Store” all sounded great. Heath and the rest of the band’s smiles lit on fire during the duration of their set and overall they played magnificently, especially on the scorching “Psychobilly Freakout”. They told us what it was…it was some kind of Chicago, Illinois freakout, that’s what it was.

With all the hoo-hah’s stepping up to game during “Freakout”, some idiot from the crowd happened to hit bassist Wallace with a beer can. That is something I’ve never fully grasped at rock shows. How the hell can you formulate such a thought of doing something so stupid? You pay the ticket price, in theory, to see your favorite band, and yet you throw shit at them. Wallace took it on the chin of course and kept that rock n’ roll train a-rollin. With the final one-two-three curtain call of “The Jimbo Song”, Heath’s vibrant “Devil’s Chasin’ Me” and their Texas farewell “Big Red Rocket Of Love”, Reverend Horton Heat ended their rockabilly-from-the-crypt rock show and told everyone to “get ready to get your ass kicked by MotÃ¶rhead!” They couldn’t have been more dead on if they tried.

After a lengthy intermission, the English gods of heavy metal themselves stormed the stage. The behemoth bassist known as Lemmy welcomed the crowd with a thunderous “Sweet Home Chicago!” What followed next were some of the loudest moments I’ve ever borne witness to at a rock concert. Kickstarting the set with the classic “Iron Fist”, MotÃ¶rhead went straight for the jugular and pulled no punches whatsoever. Lemmy’s bass could’ve been heard by astronauts it was so loud. Guitarist Phil Campbell ripped solos left and right while drummer Mikkey Dee thundered the hell out of his kit. Fan favorites “Stay Clean”, “Be My Baby” and the brand new metal slice “Rock Out” followed the intense set one right after the other with no remorse at all. Loud, fast, aggressive, rough, dirty…you name any adjective in the book and they all sound completely awesome with how great these guys performed. I don’t even need to write this, as these seem like moot points at this time in the 21st Century. 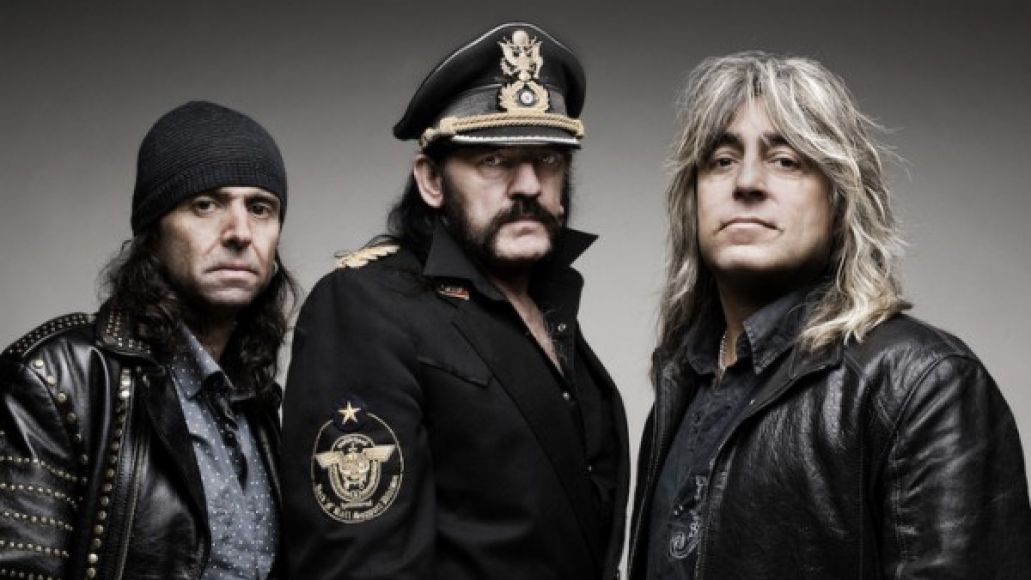 The colossal trio followed with an oldie back in the day of “Metropolis” as Lemmy dedicated to the older fans at the show and it couldn’t have sounded better. That thumping bass of his got people going and naturally the occasional moshpit broke out in the front of the stage. To their credit, this music was pretty friggin’ awesome and you couldn’t help but move and shake to it, especially during the sexy and swingfest “One Night Stand”. Lemmy’s gravelly voice belted the lyrics out like caged dogs fighting over a raw steak. The man oozed charisma and raw animal magnetism and had the ballsiest tunes to back it all up. There will never be another MotÃ¶rhead; this is it, folks.

Every dog has its day unfortunately and just before Lemmy and co. kicked into “Into The Name Of Tragedy”, some other idiot from the crowd threw what appeared to be a wet napkin of some sort in Lemmy’s direction. Naturally, the intense frontman was pissed and chewed the prick out in front of the Chicago house. Never leaving without a sarcastic quip, the bassist told of his now “tragic” state now that he was ratted out in the crowd for being an incredible asshole. Case in point: do not EVER throw shit…especially at Lemmy!

After Mikkey Dee’s incredible drum solo during “Tragedy”, the band rocked, rolled and ripped the House of Blues to shreds with a final blow of older but awesome tunes “Going To Brazil”, “Killed By Death” and my personal favorite, “Bomber.” MotÃ¶rhead thanked Chicago and slowly departed stage left. Nah ah, these guys were far from done and the crowd knew it. Separate chants of “Lemmy!”, “Campbell!” and “MotÃ¶rhead!” clashed with surreal dissonance for moments on end until the power trio returned once more for a blistering encore of “Whorehouse Blues”. Drummer Dee stepped in on second guitar as Campbell tore bluesy solos left and right. Hell, even ol’ Lemmy belted out a beautiful harmonica solo in the midst of all this acoustic chaos. It’s safe to say, even when these guys go unplugged, they’re heavier than a whole lot of bands out in this world.

After a devastatingly heavy version of the Motorhead trademark “Ace Of Spades”, the band finally called it a night with the epic deafening number “Overkill.” If ears in the concert hall had any shred of usability by this point, “Overkill” made damn sure to deafen them for at least the next three days. In the name of rock and roll, that’s the ultimate price you pay for such an excellent experience. The band said its goodbyes and farewells to Chicago and rode out into the sunset backstage. It doesn’t get better than this. Seeing these guys live is yet another chapter in this journalist’s life that’s proudly written and closed. There’s no explanation for how great they are live and how legendary their shows are. Unfortunately, the House of Blues doesn’t do justice for a band of this magnitude, but as Paul Rudd says in Forgetting Sarah Marshall, “if life give you lemons, I say ‘fuck the lemons and bail.'” MotÃ¶rhead still rocked harder than anything else, even if the venue itself wasn’t up to par.

Motorhead Setlist:
Iron Fist
Stay Clean
Be My Baby
Rock Out
Metropolis
Over The Top
One Night Stand
I Got Mine
The Thousand Names Of God
Another Perfect Day
In The Name Of Tragedy
Just ‘Cos You Got The Power
Going To Brazil
Killed By Death
Bomber