Of Montreal played in Chicago this past Thursday, at a private award party for the Gods of advertising and their foot soldiers who work tirelessly, slaving away to come up with great ideas.

Located in the tragically beautiful Uptown neighborhood in Chicago, the Riviera Theater played host to an awards show where a concert broke out. The NO Show, as it was dubbed this year, is an annual awards show for the smartest and most creative advertising to come out of Chicago in the past year. Hosted by the Chicago Creative Club and sponsored by big shots like McDonald’s, the Riviera was packed with the people who you don’t know, but who know you better than you can ever imagine. Everyone was there, from the guys who make sure you keep drinking Corona to the guys who make you want to donate to the needy. 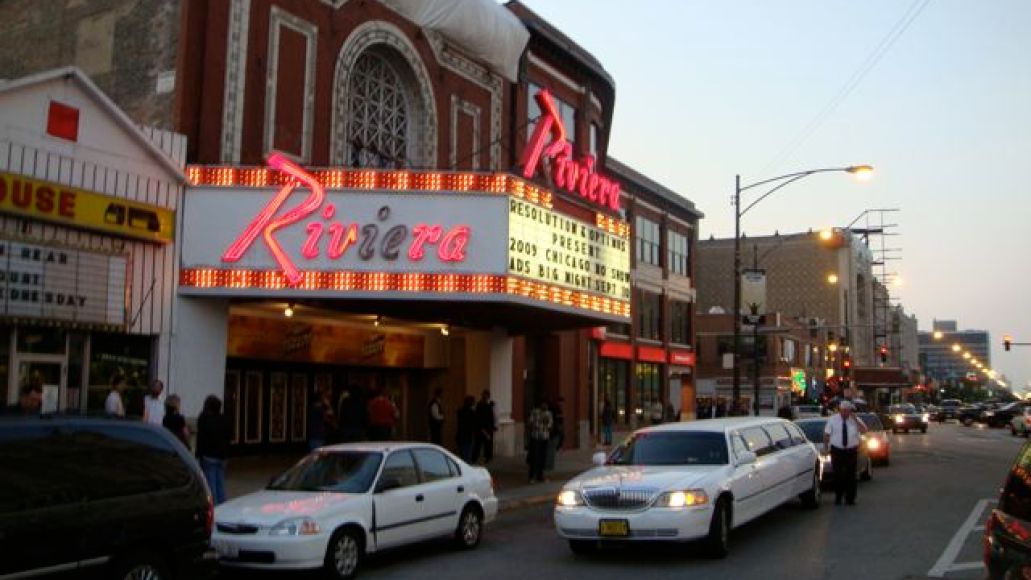 Advertising is still the field that leads our popular culture, and while some suits might have been in attendance, the overwhelming majority of the crowd was comprised of the writers, designers, movie-makers, and other creative types that think up ideas for a living. Yes, the guy who came up with “Wasssssssup!” was there, but so were the hundreds of people who are still trying to make the next pop culture landmark. From the bald and rich to the poor and bearded (I am a hungry Art Director looking for work), the real common bond in the crowd, other than being Chicago-based, was that these people know what sells and they know what is hip. Thursday night in Chicago, it was confirmed that Of Montreal is cool.

Of Montreal has been one of the pillars of indie pop music for years, and with their love of Chicago (they’ve played Lolla a few times), they brought a strong performance without their biggest fans being there. While the band might have missed the super-fans, those fans who were present were even more important, as the band was practically auditioning to have their music played in tomorrow’s commercials.  Of course, like their avant-garde videos, the stage show that was unleashed titillated some viewers and seemed to scare others, just like it was meant to. 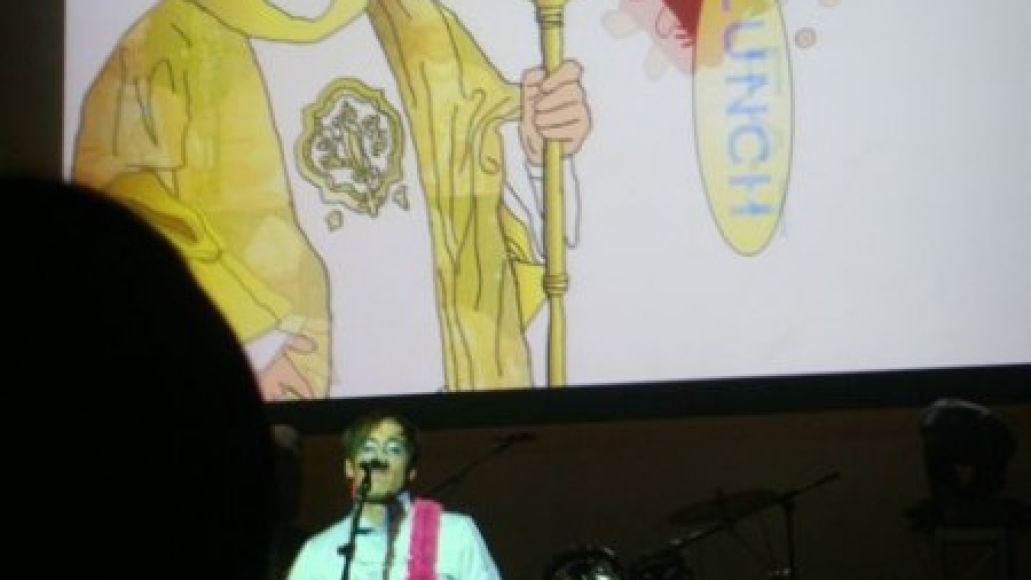 The band’s multi-media stage show was a throw-back to the bands of yesteryear, like Genesis and Devo. Back then, a concert was more than just music: it was an experiment in art. A large video screen featured flying tiger heads half the time and flashing neon crosses and crying babies the other half. As the show went on, the crowd was treated to men with pig heads fighting Catholic Cardinals in gas masks, just like the dream I have once a week. These characters would come and go as the band played on, eventually leading to the Cardinal firing smoke out of his hands as he “converted” another character. Sound ridiculous? It was, and while some of the audience members might not have “gotten it”, the passionate fans close to the stage left with inspiration for a million ideas.

As for the actual music, the band, like others at the Riv, struggled with the sound quality, but its style of music has always been great at providing a feeling rather than an analysis, and with judging taking place all night, it’s what everyone needed. One of the musical highlights was Kevin Barnes’ singing ability. In the hot and steamy Riv, he was able to use his vocal range to keep the people in the back from completely being able to hear who they were talking to, and that might have been a good thing.

And so, on a surprisingly warm night in September, the hottest ticket in Chicago happened to be at an award show for advertising, and not at a sporting event. The open bar kept the drinks flowing and the conversations interesting, while the people in attendance got to relax for a night, but only for a night. Next year is already here, and this writer plans on taking home an award next September, no matter which cool band descends on Chicago.

Of Montreal rocks the Riviera at The No Show (9/10)