Patrick Wolf is a modern pop icon. Who else attempts to incorporate a head-mic and numerous costume changes into their performances? Britney, Madonna, Gaga and pals, sure. But who could claim that they still write intellectually stimulating music? It might sound silly, but this 26-year-old (nee Apps, now Wolf) has a rightful claim to the pop throne. His stage theatrics are almost without equal, and underneath all the sorrow, makeup, and provocation, Patrick Wolf is just another one of our aspiring stars.

The venue was ideal for what he had planned for the opening night of his European tour. The Paradiso, easily Amsterdam’s best venue, is a converted church, which was packed to the rafters (literally) on Monday evening, the stage adorned only with a large fabric painting displaying a blanched landscape. The acoustics were perfect, and the atmosphere was buzzing while Wolf’s band set up. A drummer, audio technician, violinist and bassist provide the backing, but the rest of the considerable burden lies with Wolf.

The main man himself sidled on stage wearing a ridiculous monochrome Union Jack one-sie (or playsuit, in Vogue vernacular), with huge strips of fabric attached to his right shoulder. With typical panache, he seemed completely at ease, clearly aware that he could push the limits on a weekday, performing in one of the world’s most liberal cities. The show opened with “Who Will”, the first in a number of measured tracks from his latest album, The Bachelor. It’s a melancholy opener but loses none of his trademark provocation, the opening lyric “Who will penetrate the tightening muscle?” leaving little to the imagination. Amsterdam didn’t bat an eyelid.

As usual, Wolf stopped the set early on to ask for requests, eventually settling on “Pigeon Song” (despite this writer’s request for “Bloodbeat”), a solo number with complicated nail pizzicato. He followed it up with “Bluebells”, where the electronic and beat driven aspects were amplified. There was a huge contrast between the slow (which Wolf usually plays alone) and the fast paced numbers, but it all linked up well through Wolf’s improvised noodling between songs. 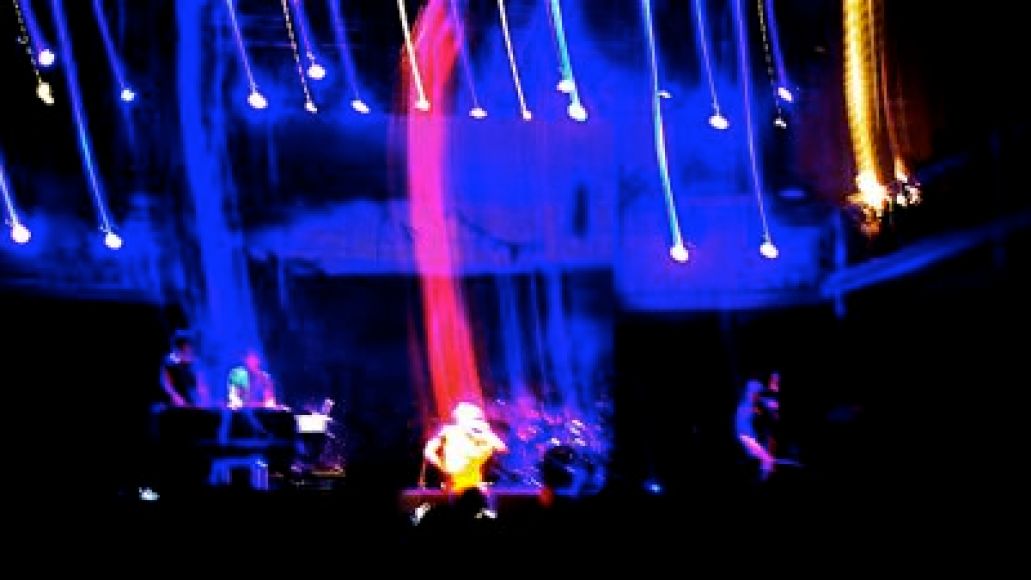 “The Sun Is Often Out” was preceded by a small monologue about the suicide which led Wolf to pen the song: Stephen Vickery, a poet and friend, committed suicide by throwing himself into the Thames. Wolf addressed the unanswered questions that are associated with this type of loss, giving an emotional solo performance which had the crowd in silent awe. This was in direct contrast with “Hard Times”, boosted in the live environment, which had Wolf playing a flying V electric guitar before marching off stage. The band continued the refrain without him, to which he emerged wearing a white tie, some tails and shorts, with a codpiece to finish the job. The crowd lapped it up.

From this point he had the crowd working for him; during “Theseus”, Wolf picked up another of his many instruments, an “Appalachian Mountain Dulcimer”, before proceeding to explain that tuning them was difficult due to the design, which revolves around mountain air pressure. The rapport was easy and belies his relative anonymity. As the show progressed he slowly evolved into his more camp, in your face persona, referring at one point to the prostitution in Amsterdam: “How do you think I made my money when I was 18? I was a natural blond then.”

“Thickets” featured a three part string harmony, arguably more suited to a live environment with its expansive sound. It is, however, obvious that his earlier work still incites the crowd in a way that the new material cannot yet touch. Wolf wrote “Bloodbeat” as a teenager, and over the years it has been transformed, taking on a show-stopping status in his set. “The Libertine” also sparkled, a ukelele led gypsy stage act which has been honed through years of practice. 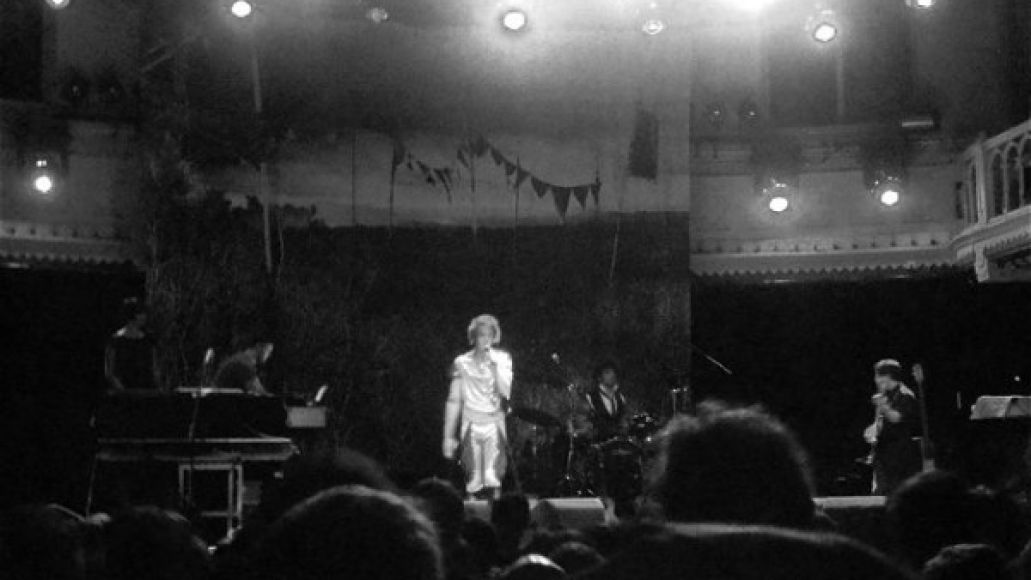 After one final change of outfit (this time to a gold lame skin tight jumpsuit) he wrapped up the set, emerging for a two song encore. “Vulture” was saved for last, where a more aggressive, sexually charged stage persona was on display, with crotch grabbing and writhing. After one final vocal flourish, he was gone.

Celebrity is often unfair, the best talents are often missed and under-rated. At this point in his career, Patrick Wolf certainly falls into this category. His music is ever more challenging and experimental, and the stage performances have an air of Bowie about them. And yet, he still rails against the rules and limitations of major labels and societies’ shortcomings. It sounds cruel, but if his journey continues to produce such wonderful music, long may it continue.