“All you need is love,” Bono declares. “And a spaceship.” The Irish frontman smiles, looking up at his robotic monstrosity that’s entertained thousands of Chicagoans for the past two hours on this breezy Saturday night. There’s a great vibe going around inside Soldier Field, one of love, peace, and respect — though mostly because the world’s biggest act is playing one of its greatest hits of all time, The Joshua Tree‘s always-classic, “With or Without You”. There’s not a soul nearby who isn’t singing their respected heart out. In a nutshell, it’s a life gripping moment. But, that’s in a nutshell.

Everybody who knows U2 (which, let’s be honest, is everyone at this point) is well aware of the theatrics, both on and off the stage. Too many poke fun at Bono’s humanitarian efforts and some might say their stage set ups precede the music itself, but the truth is, they know what type of band they are, and they go with it. What exactly is “their type”? Simply put, they’re the world’s biggest rock band. Try and find a bigger act out there. You won’t… and that’s okay. Like ’em or not, the Irish quartet have made it a career to be at the top, and they’ve, for the most part, succeeded. Don’t believe it? See if they’re playing your town, hit up the venue on the day of the show, and snag a scalped ticket outside. (As of now, that’s pretty much the only way you’ll squeeze inside, considering every venue’s sold out.) Two hours in, you’ll be convinced, too. 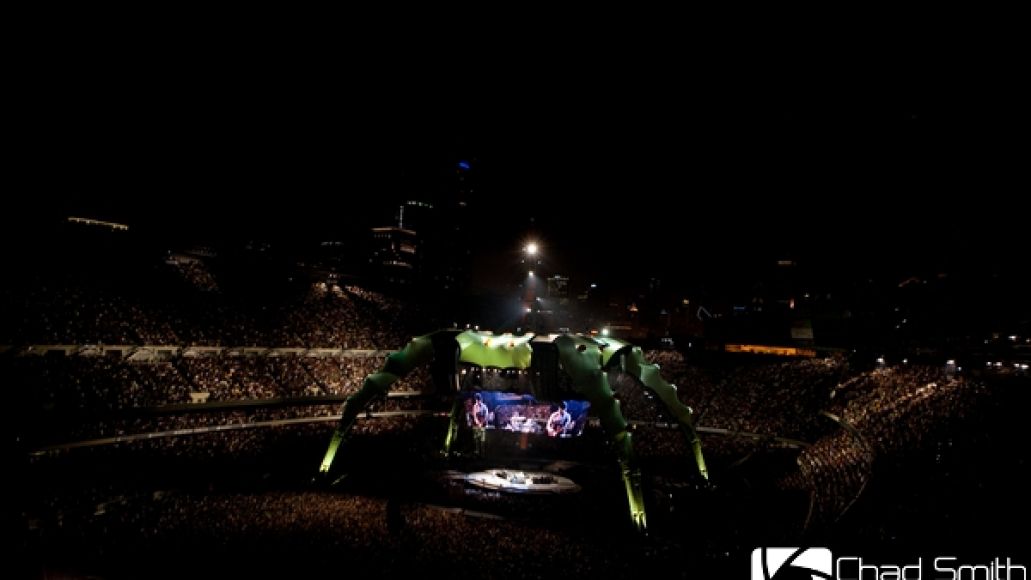 Once David Bowie’s “Space Oddity” reverberates across the PA, thousands of Chicagoans become–for better or worse–true believers. From underneath “the claw”, which would be mistaken for a set piece on a Michael Bay-directed film any other day, the expansive 360° LCD screen counts down to Bowie’s infamous extraterrestrial number via a green digital clock. As if they transpire out of thin air, band heroes The Edge, Adam Clayton, and Larry Mullen, Jr. hit the stage and ring in with the jangly, bouncy swagger of “Breathe” (off this year’s No Line on the Horizon). Seconds later, Bono jumps from behind Mullen, Jr.’s kit and screams, “There’s three things I need you to know. Three!”

What’s surprising is how dependable U2’s fanbase is. What band in their respected age today can bookend a set list with new material? It’s almost suicide for some. Springsteen does it, but even he throws in “Badlands” or “Prove It…” by song two. No, The Edge continues to fiddle through song after song off of …Horizon, and the crowd eats it up, mostly. “Get On Your Boots” brings cheers, while “Magnificient”, arguably one of the new album’s stronger points, has most staring blankly. Though the stadium really starts feeling the weight when the opening chords to “Beautiful Day” ring clean. From here on out, it’s a non-stop thrill ride, and mostly thanks to the band’s 1.5 million dollar stage. 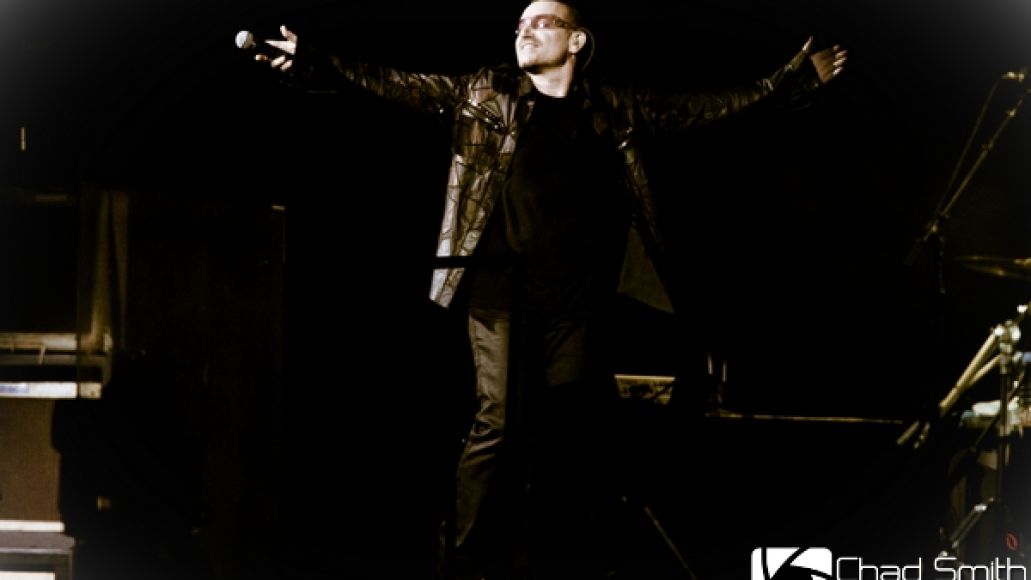 Try and imagine, if you will, a stage set up no different than a swiss army knife. It dazzles, it moves, it grows, and, well, it just so happens to shine beams up into outer space. Cool, right? Thanks to “the claw”, several cuts stood out above the rest, even over some classic hits. During a live remix of current single “I’ll Go Crazy If I Don’t Go Crazy Tonight”, the 360° LCD screen displays all four members heads, rocking out in rhythm to the song, and when it really kicks up the beats, the claw’s arms that seem to dig into the ground below radiate some wild, blinding lights, turning the god-like dome of Soldier Field into an intimate, dance club. Sometime before that, the cyclical screen expanded into a multi-colored, bee-hive-shaped cage, to which the band played inside. And to think, that only describes what happened during two songs.

Decadent visuals aside, the real jaw dropping moments come from the band itself. Clayton and The Edge are still a formidable team, and they prove this during “Vertigo”, when the two walk about the stage, over bridges and through smoke, never missing one note and/or breaking that connection with surrounding fans. The real delight arrives with the beat down of hits “Sunday Bloody Sunday”, “Pride (In The Name of Love)”, “MLK”, “Walk On”, and the soul searching sweep of “Where The Streets Have No Name”–all in that order, too. “Sunday” is still one of the band’s most poignant hits, and towards the end Bono spices it up with a snippet of Elvis Costello’s “Oliver’s Army”. Before “Walk On”, Bono champions for the global campaign of Burma’s democratic leader Aung San Suu Kyi, and amidst the performance, dozens of fans walk around the stage, holding a paper face mask up in the air. Once “Streets” starts up after, thousands steal the moment from Bono, who lets everyone sing the opening verse, all in perfect melody. When the band really kicks in, a solid beam of light ignites from the bottom of the stage all the way to the top, driving high into the atmosphere above. 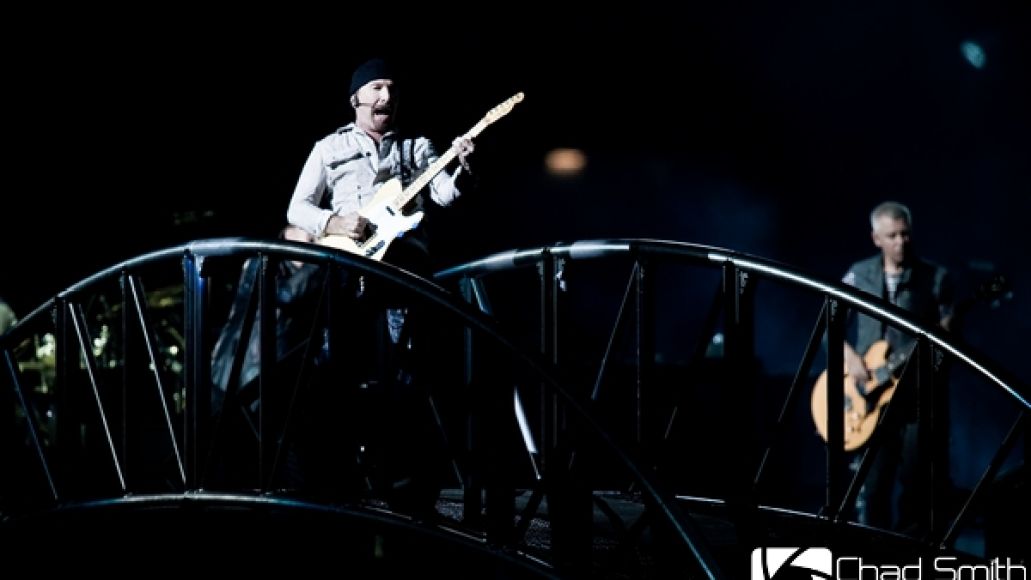 It’s hard to top yourself again and again, but Bono and Co. manage to do it song after song. Even after everyone’s favorite ballad (“One”), the band’s greatest tear jerker (“Bad”), and one of music history’s most heartfelt and angstiest songs to date (“With or Without You”), they storm on — and with new material, no less! This time though, Bono doesn’t rely on the stage nor the band’s prowess. Instead, he instructs everyone to hold up their cell phone, to which they follow suit, creating a human universe that sparkles and teems with color, no different than the stars and galaxies above us every night. Call it hokey, but Bono makes a connection with every concertgoer right then and there. It’s a very rare and spiritual moment, and while that universe slowly and surely fades away as “Moment to Surrender” strolls on, the engulfing two-minute image rivals that of the Grand Canyon, of Easter Island, and so on. Without a doubt, that right there is worth $60 dollars and your Saturday night.

Setlist:
Breathe
No Line On The Horizon
Get On Your Boots
Magnificent
Beautiful Day/Blackbird (snippet)
Elevation
I Still Haven’t Found What I’m Looking For/Stand By Me (snippet)
Stuck In A Moment You Can’t Get Out Of
Unknown Caller
The Unforgettable Fire
City Of Blinding Lights
Vertigo
I’ll Go Crazy If I Don’t Go Crazy Tonight (remix)
Sunday Bloody Sunday/Oliver’s Army (snippet)
Pride (In The Name Of Love)
MLK
Walk On/You’ll Never Walk Alone (snippet)
Where The Streets Have No Name
Encore 1:
One
Bad/Fool To Cry (snippet)/40 (snippet)
Encore 2:
Ultra Violet (Light My Way)
With Or Without You
Moment of Surrender 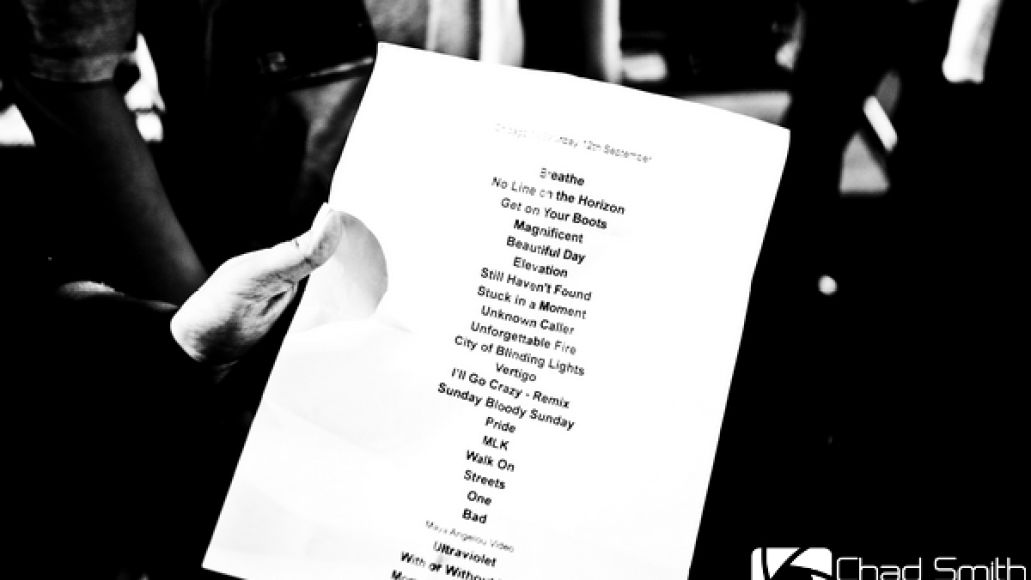 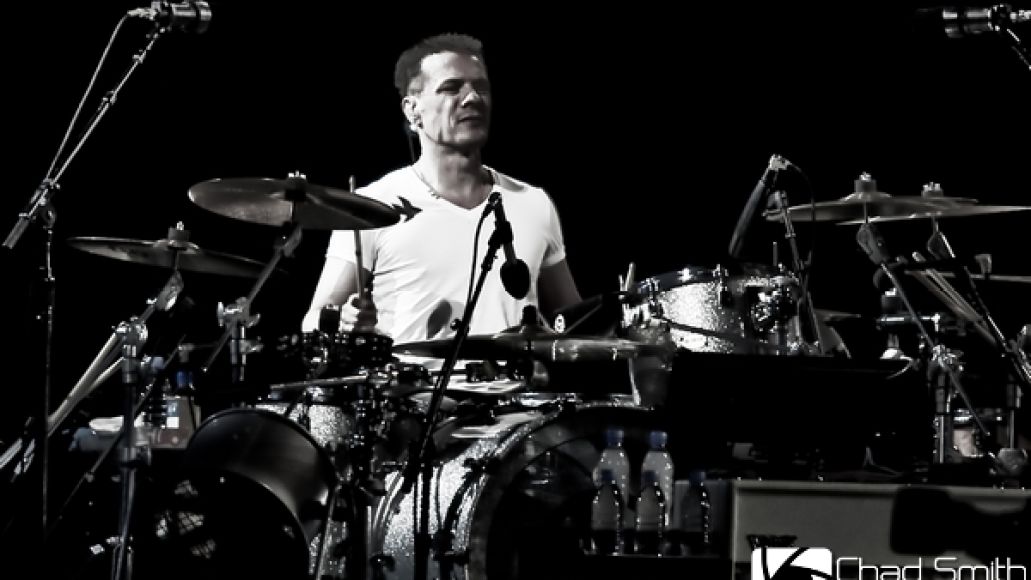 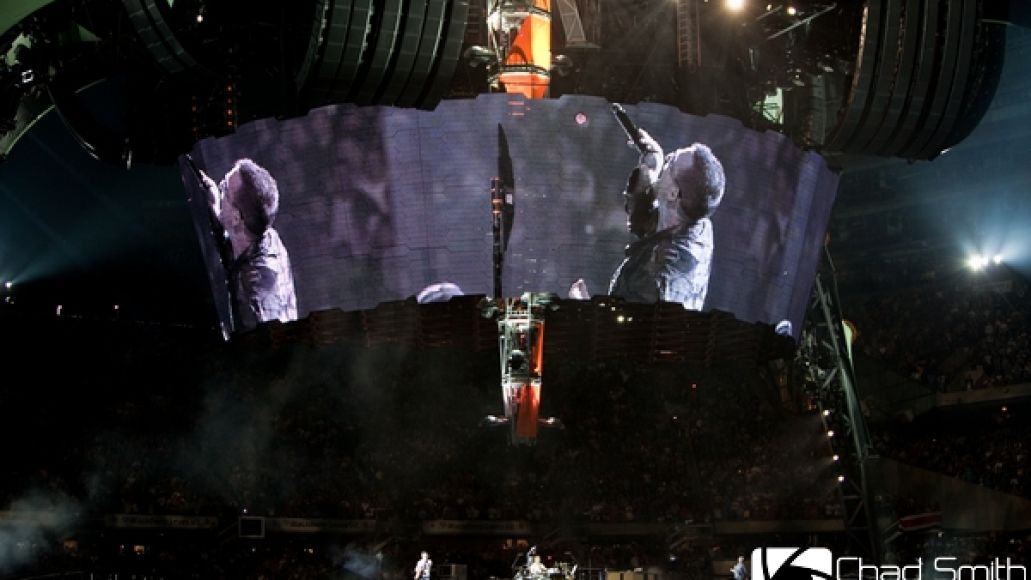 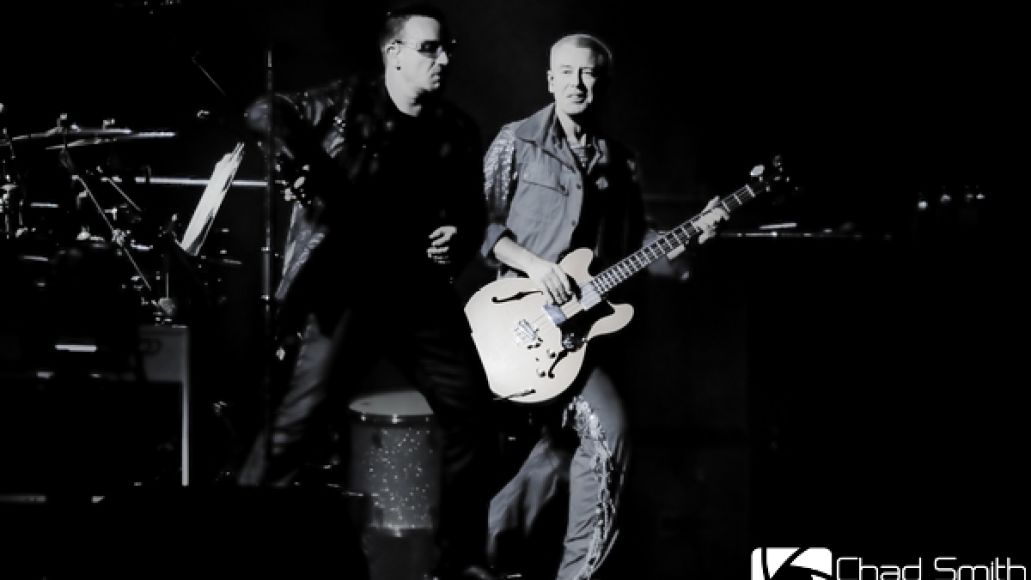 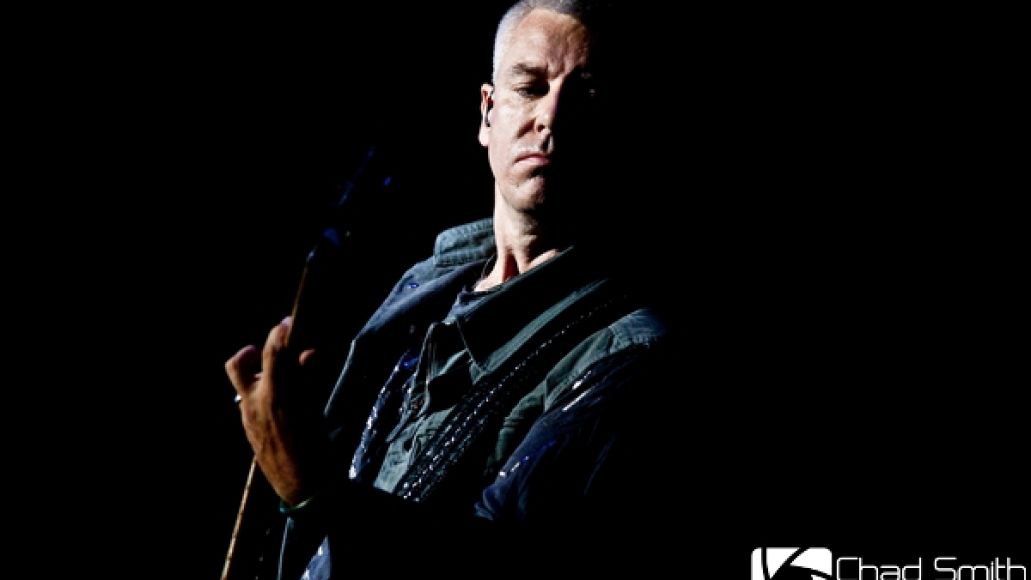 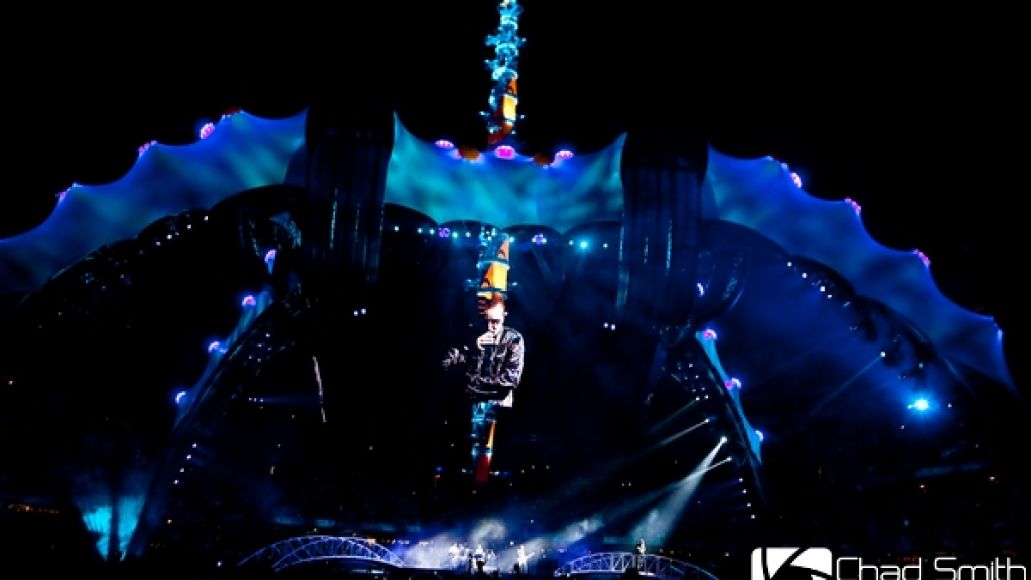 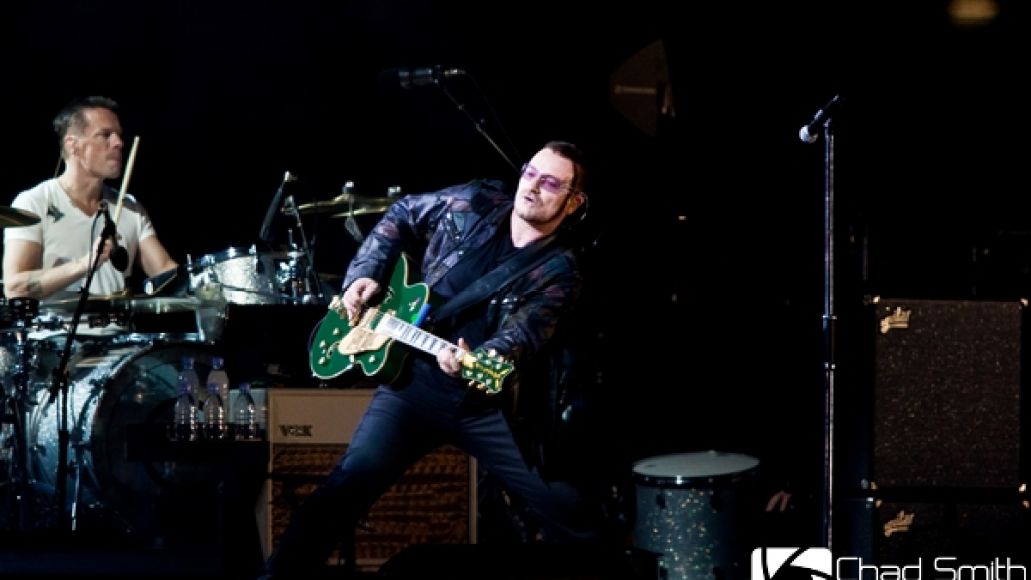