There’s a fine line between rock ‘n’ roll and disco — just ask anyone who lived to see Comiskey Park’s claim to fame, 1979’s Disco Demolition Night. But apparently one world-renown DJ, singer-songwriter, former punk rocker, and movie-composer extraordinaire doesn’t think so. You guessed it, Mr. Richard Melvin Hall himself, also referred to in some circles as, ahem, Moby. While timid and too kind on the microphone between songs (By the end of his initial set, the “thank you” count peaked at 3,789.), the North Eastern guru is a beast unto himself as he dances and jumps and screams throughout his amalgamation of rock, disco, soul, Mississippi Delta blues, R&B, trance, ambient electronica… pop.

“I have a confession to make,” Moby announces breathlessly. “I used to be a raver.” With a smile and a bashful demeanor that belongs to a nine-year-old, he launches into club-favorite “Feeling So Real”, which takes him behind a set of bongos, where he pummels madly to the erratic, unpredictable beats. It’s a charged moment for the sold out crowd at Chicago’s intimate Vic Theater, but it’s then and only then that people are thinking, “Oh yeah, he used to just be a DJ.” 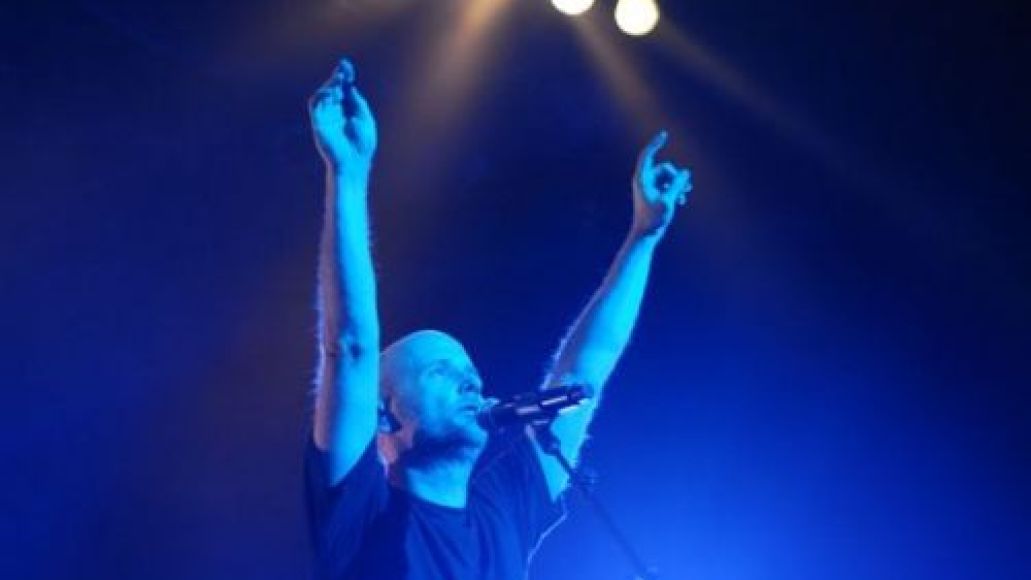 A year ago, things were different. Moby popped up everywhere, from electronica festivals to secret club shows, but typically guesting as a celebrity DJ — which made sense, given his back-to-basics 2008 effort, Last Night. But really, that’s not why he’s Moby. He’s a pop culture icon for his unique musical innovations, particularly his celebrated work of ambient, moody, pop-rock. What started with 1995’s Everything Is Wrong (try and remember: “God Moving Over the Face of the Waters”) became fully realized with 1999’s critical-commercial smash Play and while the guy’s felt his share of hiccups (2005’s Hotel, for one), no one should ignore this year’s release, his genuine magnum opus, Wait For Me. That’s more or less a reminder than a statement.

After all, there’s so much to enjoy — something fully realized waist deep into Moby’s live set. 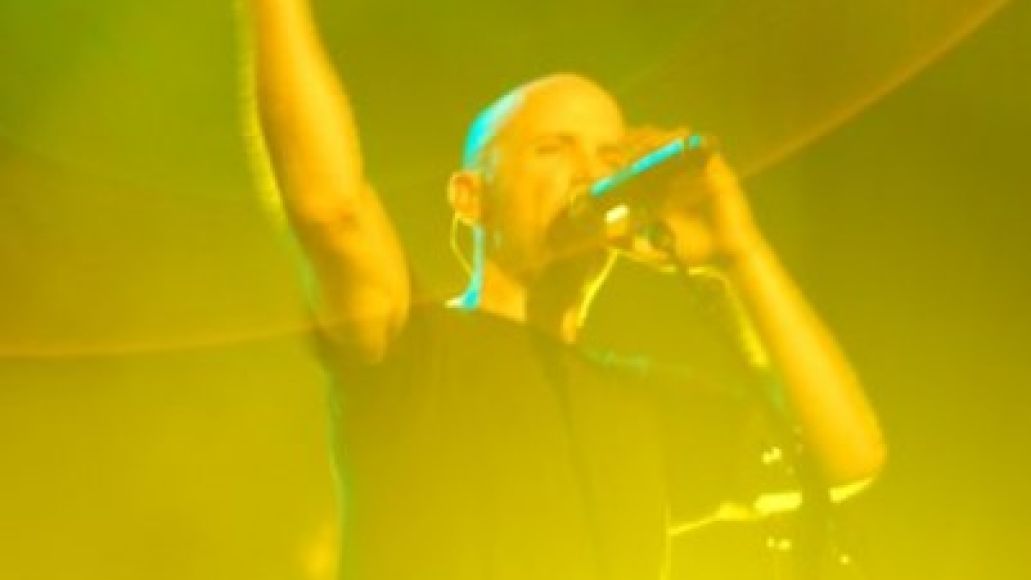 Halfway through the band’s cut of “Pale Horses”, which has vocalist Kelli Scarr crooning at the mic, it’s obvious: Moby’s written a blues-rock album. Sure, Wait For Me is layered with instrumentation, synths, and computerized effects, but at its heart, it’s chock full of Delta blues. He sells this idea, when he announces, “So, we’re going to do a cover song of the we just played.” He’s quietly laughing — hey, the joke’s on us — and quickly he thumbs the guitar while Scarr gives it another go, only this time with less flesh and more bone. Voila, the realization is fact. This actually happens quite a lot. When the rather voluptuous and hair-raising vocalist Inyang Bassey belts out past hits “Flower”, “In My Heart”, and especially “Why Does My Heart Feel So Bad?”, Moby’s initial framework isn’t quite as clear as it’s just downright blatant.

But, it wouldn’t be a real Moby show without the ambiance, and boy does he deliver. New and future favorites “Shot In the Back of the Head”, “Mistake”, and “JLTF” ooze with delight and tremor, embalming the audience with a moody cadence. Moby’s guitar parts might seem repetitive or even minimal (especially on “Shot…”), but he makes the best of it, clawing at his axe emotionally and working the crowd with stares and smirks. And once all-time classics “Porcelain”, “South Side”, and (the always badass) “Extreme Ways” roll by, it’s hard to ignore the little bits of minimalism that roll up to become something out of this world.

And while some can argue that it’s just a Moby-curated event, given the constant rotation of vocalists and top-notch instrumentalists, you have to remember it all derives from that bald head of his. Don’t forget that he’s quite the character himself. When he’s not slouching behind his black Gibson SG or bongo’ing it up, he’s dealing with irate, mixed-drink throwing fans (“I don’t bother you at Denny’s when you’re working.”), testing out new songs (the very New Order-esque “Effected”), and asking for approval (“We’re still trying to see if it’s good.”), slipping in oldies (the Twin Peaks-sampling “Go”), and soldering Led Zeppelin riffs and Black Sabbath’s “War Pigs” to one lengthy rendition of “Honey”. No, he’s not about to star in his own sitcom, but yeah, he is bringing joy to thousands of fans each night — especially the “quaint” motley crew of drunk 40-somethings, hot off their latest mid-life crisis (What the hell was up with that, Chicago?). What’s his secret? Who knows? But maybe, just maybe, it’s that disco and rock ‘n’ roll do belong together.

What can I say, I was pumped. During the concert I’d been chained to my shutterbug duties, no time to dance — but at Smartbar it was on. An hour after his rock ‘n’ roll heavy show had concluded, Moby was led into the DJ booth, and melded the beats of the previous DJ seamlessly into his own groove. This show had been kept on the DL, only people at the concert ($5 entrance fee with ticket stub) and those on Smartbar’s mailing list knew about it. As a result there were maybe fifty people, tops, in the club at one time. It was a majestic.

I’ve been around clubs a bit, not as much as some, but just enough to know how much suck there is in the DJ world and how few really know how to meld and create a unified tapestry of sound. This night shattered all that. Moby is a prodigy at the tables, and he worked the enthusiastic crowd like a master. He paced the audience, kept things hot, took off his earphones and riled us up into a flurry of bodies spasming in the strobe lights. I couldn’t identify any of the elements being sampled, I just moved and the music moved with me. For an hour and a half Moby worked the floor — a master of his domain, true to his roots, not rusty in the least.  A guy threw his arm around me and said, “This is beautiful! This is so beautiful!” He was right. -C.B.

Setlist:
A Seated Night
Shot In The Back Of The Head
Wait For Me
Mistake
Flower
Bodyrock
Go
Pale Horses
The Great Escape
South Side
In My Heart
JLTF
Why Does My Heart Feel So Bad?
We Are All Made Of Stars
Porcelain
Effected
Walk With Me
Natural Blues
Raining Again

Encore:
In This World
When It’s Cold
Extreme Ways
Honey
Feeling So Real 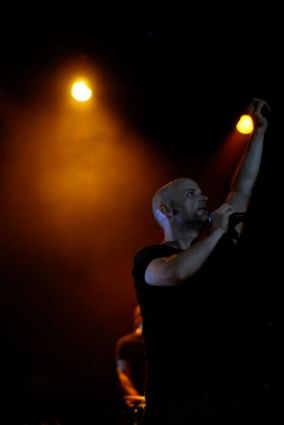 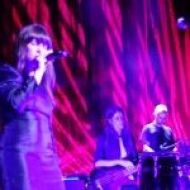 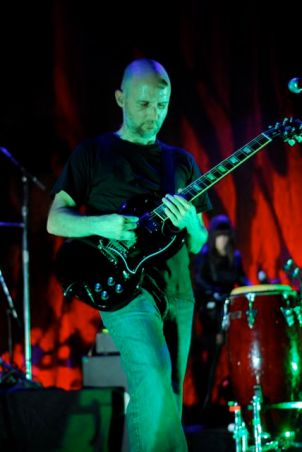