Adding to the usual debauchery of Halloween weekend is the FEST in Gainesville, Florida. For three days (October 30 through November 1) avid music fans permeate Gator town. With over 300 bands playing in a dozen venues throughout the city, paired with impromptu and house shows, the FEST is like a punk enthusiast’s scavenger hunt to awesomeness.

The FEST is filled with ink, beards, and the Pabst Blue Ribbon that pours out of sweaty fans’ pores, as they fist pump and crowd surf. Outside of the music related fare, there is Friday’s FEST-organized pool party at the University Holiday Inn, and the flea market, affectionately known as the “FEST dirt mall,” with plentiful freebies. In addition, No Idea Records hosted a parking lot sale and Barbecue as a pre-FEST attraction on Saturday morning.

The local band Battle! kicked off the FEST in 1982, the small bar sandwiched between UF Nail and Wing Zone. Battle!’s straight forward melodic performance showcased the fast and aggressive nature of percussion, as the drummer’s accelerated kick pedal work awed the audience. The band was led by a robust set of pipes, which spewed an onslaught of unintelligible lyrics. The one exception to that was “Hourglass”, as the lyrics were heard loud and clear by the crowd. The heavy subject matter presented in a softer light juxtaposed with the band’s hardcore, yet catchy sound brought genuine tears to the fans’ eyes.

The Riot Before was quick and to the point, with simple lyrics inspiring an inordinate amount of fist pumps. Fittingly, the Richmond, Virginia band played at the Atlantic, which mirrored the band’s occasional AC/DC-esque circa “Thunderstruck” guitar styling, with its dark early ’90s feel. The Riot Before was easily one of the most energetic performances of the FEST. Unfortunately, “Words Written Over Coffee” was played sans harmonica, resulting in depleted charm, even if it coincided with the venue better than the song’s softer recording found on Fists Buried in Pockets. Fortunately, the complex lyrics aided in enthralling the listeners.

Coming in third for the day was a stop at The Venue. Walking in, one instantly feels like they’re running up a ramp, which opens out to the football field and the big game under the stadium lights. Fittingly, Small Brown Bike is the Brett Favre of punk. Wavering back and forth between retiring and playing, the band managed to come together for two shows at the FEST and is pushing along with their career, making a logical transition into a more mature sound. The Michigan natives are unparalleled in their pairing of high intensity performance and guitar tapping. While some musicians’ performances would suffer while they stare at their hands meticulously executing the songs, Small Brown Bike is able to rock out. However, the band’s breakdowns lacked the needed speed and consistency toward the beginning of the set. By the end, though, Small Brown Bike hit its stride with great synchronicity.

Immediately after Small Brown Bike, The Venue hosted A Wilhelm Scream. This band can easily be described as the Dream Theater of hardcore punk, but somehow they fail to make the numerous components of their band fit as well as their progressive rock counterparts. Bass player Bri Robinson held the show together with his animated performance and groove inducing bass lines. While the other members spent a notable amount of time bouncing around the stage and into one another, Robinson played to the crowd by finding the one person uninspired by the band’s playing, and making it his mission to get them involved. Musicians like Robinson are what live shows are about.

The night ended with a trip back to the Atlantic and a FEST staple – the reunion show. The Ghost broke up in December of 2004 citing “arguments, shifting interests, consistently harsh tours, depression, and conflicting views” as the reason. Wounds of the past bled, as singer Brian Moss seemed to be the only band member who cared that they were performing. Focusing heavily on This Is a Hospital, the band opened with the album’s first track, “Death by the Bay”. The Ghost has a knack for taking overlapping guitar work like that of Hot Water Music and making it more mathematical and painfully deliberate, all the while trying to retain a sense of melody. 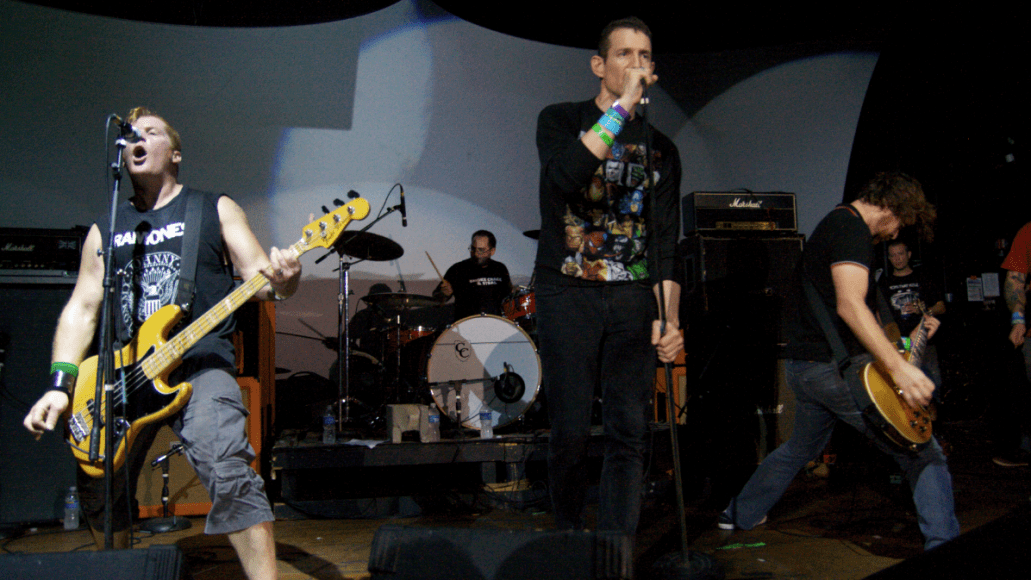 After an evening of a “punch-in-the-face” welcoming to the FEST, Saturday afternoon brought a welcome break, offering enchanting acoustic shows. The Civic Media Center, a gathering for alternative and non-corporate press enthusiasts, hosted two of the best acoustic sets. Shelves of books and a minuscule stage added a coffee-house feel to the Grabass Charlestons. The band resurrected the light, feel-good instrumental style of the Gin Blossoms and the vocal tone of Tom Waits from guitarist PJ “Peej” Fancher. The band’s cover of Warren Zevon’s “Carmelita” was a poignant performance, despite constant heckling from the town’s local idiot and die hard Rancid fan.

Following the Grabass Charlestons, Andrew Jackson Jihad packed the small venue to capacity. The band focused on new material, shying away from fan requests for older songs such as “Lady Killer”. This is respectable because Andrew Jackson Jihad has progressed into a more self-aware and introspective band. To play the old stuff would discredit their more earnestly based viewpoints. Sounding eerily similar to The Mountain Goats and with the lyrical gimmicks of Mike Doughty songs such as “Circles”, this band has been heard before. However, they’re just as good, if not better, than their predecessors and completely worth listening to. Also, they were nice enough to play a set in the adjacent parking lot for the fans that were unable to get into the Civic Media Center.

Later, Less Than Jake played at The Venue. However, it seemed more like they had planned to throw a birthday party for bassist Roger Manganelli, and the crowd just happened to show up and join in on the fun. One of the best, if not the best, performances of the FEST was provided by the ska band. The band threw out prizes to the crowd, called people up to the stage to take shots, and created the experience of a lifetime. Too bad all parties aren’t as FESTive.

A trip to Flacos restaurant occurred next, in anticipation of Big Black Motorcycle (Small Brown Bike’s acoustic set). First, a solo performance took place. As mentioned before, Brian Moss of The Ghost seemed to be the only member stoked to perform on Friday, which explains why he would venture a solo career as Hanalei. Moss uses his solo act to get on the soapbox and discuss religious zealots and Chicago. Vocal squeaks were plenty as Moss sang with a FEST-torn voice from his performance the night before. Billed by the FEST guide as “earthy-folky acoustic jams,” Moss instead used his electric guitar, which gave his songs a different, yet still enjoyable flavor.

Finally, Big Black Motorcycle played, and in the spirit of Halloween, drummer Dan Jaquint was dressed up as Roger Bart. Oh, wait, that wasn’t a costume, it is just an eerie resemblance. “A Declaration of Sorts” was transformed into a beautifully melancholy ballad. The chorus maintained its brain-infiltrating traits, while the acoustic version allowed unheard lyrics, such as “This is the last time that I feel broken/I’ve tried to fix this mess/For years and years I fight my stress,” from the night before to shine.

An unexpected crowd favorite followed. From across the pond came Apologies, I Have None. The upbeat punk rock inspired the most crowd interaction all FEST, complete with a fan pyramid erected three tiers high. For their first show in the States, this band deserves to be proud. 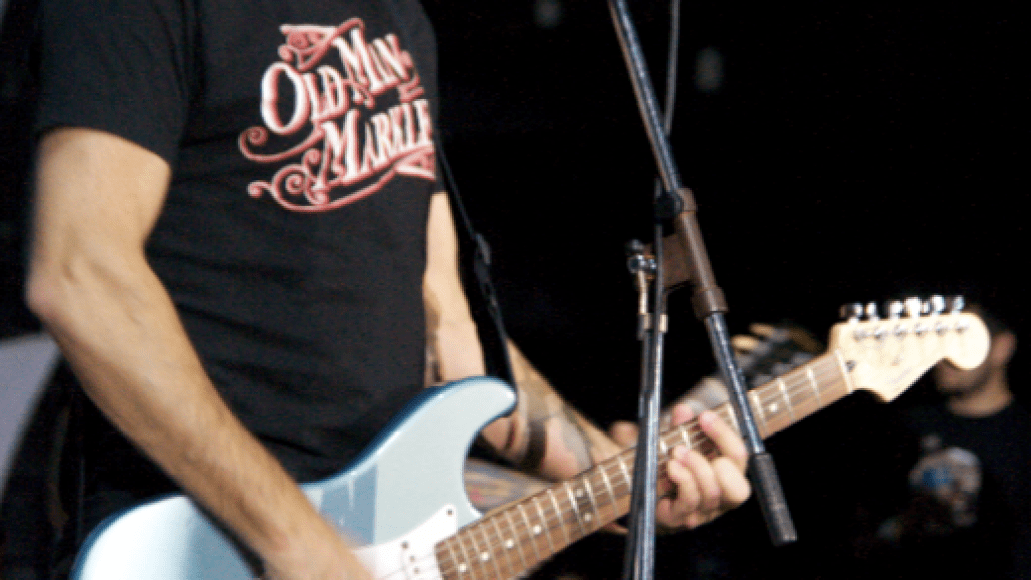 Halloween wrapped up with an impromtu Youth Brigade show at Mexican restaurant Boca Fiesta. Unfortunately, this was possibly the worst show of the FEST. After a screening of a two-hour movie venerating the band’s career, they played like a gaggle of 14-year-olds in a Youth Brigade cover band. A solid two to three minutes of screaming, “Vocals! There’s no vocals,” which was clearly heard by the crowd through the microphone, ensued and the first four attempts to play anything at all were utterly futile.

The new month was ushered in with 12XU from France. Rocking riffs, and sensitivity with an addicting accent transpired into an intense show, with many first time listeners leaving as fans. Afterward, The Bomb had an amazing set with a considerably sparse crowd at The Venue. Nonetheless, singer Jeff Pezzati, originally of Naked Raygun, enthralled the audience with his classically trained voice. Said voice was a welcome deviation from many of the FEST’s overly raw vocals.

The Emotron played the Kickstand. Solo musician Jason Kyle Knight promotes the “I’m-misunderstood” aesthetic to the grave. News flash: you’re misunderstood because it is difficult for people to fathom why throwing flour and chocolate syrup around and pissing on the stage is being pawned off as art. The dance beat style paired with a more hardcore sound is slightly enjoyable, though. The Emotron should focus on honing that combination and forgetting about the shock show.

After The Emotron train wreck, Kickstand offered a trifecta of first-class bands to close the FEST, beginning with O Pioneers! from Houston. The band appeals to fans of Against Me! and Fugazi, offering the same sort of atmosphere. Next, Bomb The Music Industry!, which gives their music away for free, exhibited talented songwriting. “Congratulations, John, On Joining Every Time I Die” is a key example of this, with the chorus, “Nice going asshole/Nice going asshole/Nice going asshole/Nice going asshole,” followed by lyrics such as, “I hope you know that Christine’s gonna ask you to get into all your shows for free/And I will smile while silently resenting you for quitting Bomb The Music Industry!” Performed with a punk, ska, and pop vibe, the band is beyond infectious, so take advantage of their free music and join the fight to save the soul of music.

Shutting down the FEST was the most anticipated show of the three-day festival, Defiance, Ohio. The second show of the weekend for the Bloomington bunch electrified the small venue. The amount of hooks and talent produced by the band are profuse. Songs like “Condition 11:11” tightly grasp the audience from the beginning with the Deliverance style (if the movie were set in an urban club) banjo playing by Sheri. The infectious sampling of Defiance, Ohio’s catalog left fans dancing, shouting, and screaming for more. Unfortunately, the cops showed up and eradicated any chance of a much-requested encore.

Overall, the FEST’s low ticket price and abundant musical and community offerings, paired with the lack of corporate hands crowding the cookie jar, offers one rocking Halloween weekend. The good news is, despite rumors of this FEST being the last, first prize for the FEST 8 Photohunt is two passes for FEST 9. Looks like there is more fun to be had in Gainesville’s future.