There are some things you can count on at a Sam Quinn show: a thin Quinn taking the stage, wearing brown pants and sporting wily hair (facial or otherwise). This frigid North Carolina night, Quinn delivered and his company gave the crowd much more than they bargained for: a green sequin caped banjo playing man and a young librarian-looking, jazz lady. Ladies and Gentlemen of Charlotte, welcome to the New South. This ain’t your grandpa’s night out to hear some roots music.

For that, your music loving family in Charlotte says a resounding: thank you.

Knowing the crowd’s expectations and meeting them are good ideas. But concertgoers live for the shows with some combination of their favorite songs, some unexpected twists and discovery of a new favorite “unknown.” Held together by the local label Ramseur Records, this night at the intimate Visulite Theater showcased their own Sam Quinn + Japan Ten, as well as close relations Justin Robinson and the Mary Annettes and Sally Ford and the Sound Outside. 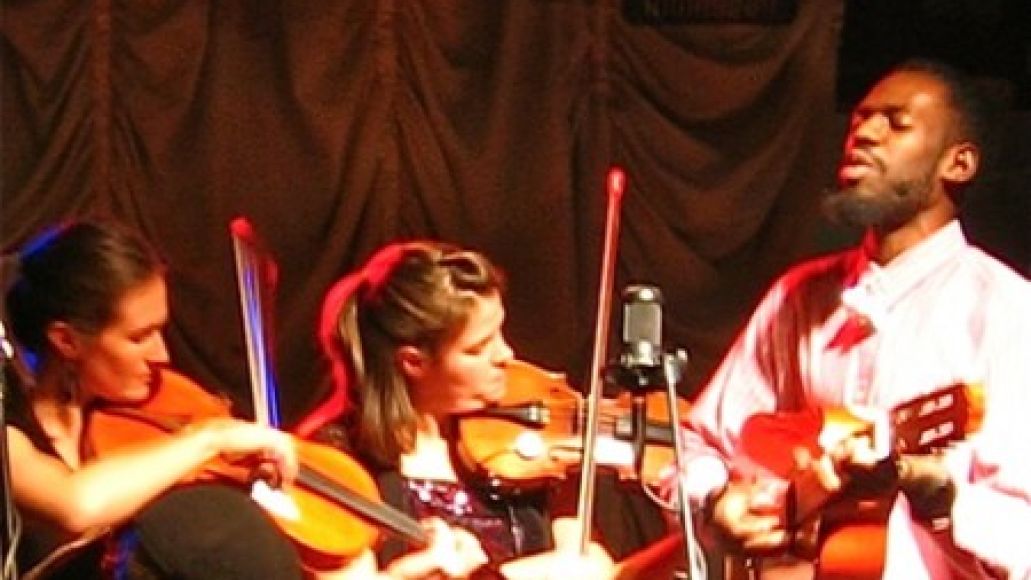 What Charlotte’s music scene lacks in breadth, it makes up for in depth. The people here who love music, really love it. They know and support each other. Under the roof Tuesday night were local venue owners and operators, as well as fellow and former band or label mates. The most well known toe-tapper in the crowd: Seth Avett of The Avett Brothers, inconspicuously down front in jeans and boots, occasionally shaking hands with friend or fan or peeking at the recording set-up.

Enter Justin Robinson and Mary Annettes, a swirling combination of sequins and satin, Bach and banjo, strings and Stankonia. Their sounds take your venerable roots world, tip it gently upside down, let avant-garde beats swirl around until it leaves you in childlike wonder. Robinson, a North Carolinian known for his tunes with regional favorite Carolina Chocolate Drops, provides lead vocals and facile instrumentation of a diverse persuasion. He moved effortlessly amongst the autoharp, banjo, fiddle and guitar. Other band mates complimented his lead with Kyra Moore on fiddle and harmony vocals, and Josh Stohl on drums and bass.  The songs were unpredictable, unpolished and intelligent.  Robinson sold his doe-eyed crowd on his offering, but didn’t even have an album for us to buy. We’ll look forward to that very soon because these myspace tracks don’t do them justice at all.

Next up, and fresh off of the grand gig of opening for The Avett Brother’s New Years’ week rendezvous, were Sally Ford and the Sound Outside. Their band’s sounds were a tight and polished offering of hipster library sheik, jazzy blues. Sallie Ford leads on vocals and guitar, with support from Ford Tennis on drums, Tyler Tornfelt on Upright Bass and Jeffrey Munger on guitar. Early in the set, Ford’s homely demeanor and appearance made it comfy to watch, but didn’t easily reconcile with her vintage vocals, in which some of the lyrics vanished. The crowd bought in as they hit their stride later in their set with “Danger” and ended strong with a sea of bobbing heads and swinging shoulders. 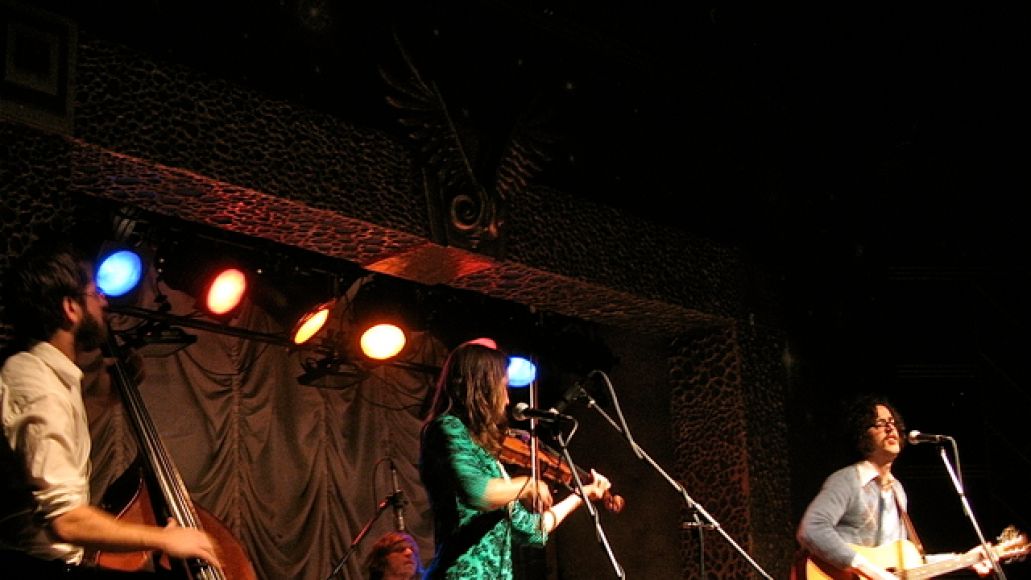 Sam Quinn took the stage.  Same brown polyester pants, different decade. For him, we wonder if this new year will be the one where his billings no longer necessitate the parenthetical “formerly of the everybodyfields.” He took the stage in Charlotte, less whiskery and more manly- the latter being the trend of his shows as Sam Quinn + Japan Ten.  Over the past year, Quinn’s stage presence is stronger and more comfortable as the conductor of his band.  He led them well through “Hello”, a song they’ve been doing for a while, and old everybodyfields favorites, “Magazines” and “Down by the Water”. Then there was “Gun”, a song written during the everybodyfields but not recorded. It leans heavy, a song that aches with the tension that it is, yet never really never was, and will never actually be. Akin to something like the space shuttle Challenger.

This is what happens when you pickup someone else’s baggage. You get a suitcase full of garments that gape on your chest or pinch at the seams. “I Can’t Sleep” off the everybodyfields best album, Lonely Anywhere, was some of the band’s best work. It’s on songs like this that Fiddler/vocalist Meghan Gregory is best left to fiddle. It’s a song about an end without any resolution. Gregory’s strong and resolute voice combined with her occasional smile and obvious dependence on Quinn’s cues for timing fits awkwardly on a track she was never meant to wear. 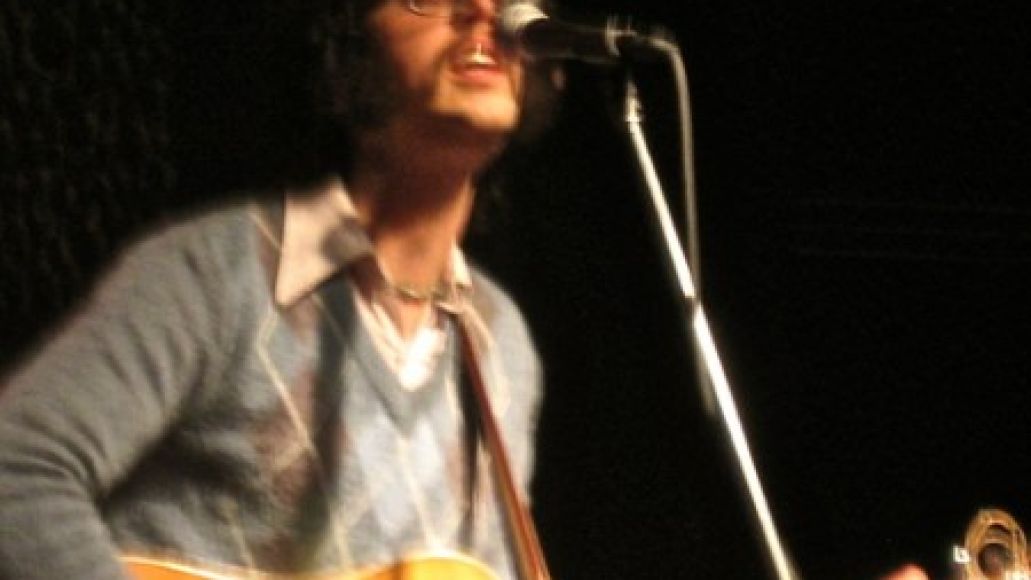 It’s with determination and much wrist slapping we’ve made it this far without mentioning Jill Andrews, who gets her own turn at the Charlotte crowd the same week. It is not fair to compare Gregory with Andrews or The Japan Ten to the everybodyfields. They are different. We choose to embrace change and hope and the future. Blast it though, she is good and we are still not over the breakup. Quinn left a bit of his soul on the stage every time he and Andrews played. Over time, that will destroy a man. But it was heartbreakingly beautiful while it lasted.

New material makes it easier to move forward with the Japan Ten ensemble of Gregory, Josh Oliver (bass/keyboard), and Brandon Story are at their best: genuine and comfortable. “So Strong” and  “Fanboy” exemplified their ability, thankfully still baggage laden. We melancholy types come to their shows precisely because they do not cheer us up. The stand-up bass was a great addition, though the full drum kit was a bit overpowering at times. They allege a new album for spring 2010 titled: The Fake that Sunk a Thousand Ships. Lest you worry, this sprinkle of seasoned maturity does not overpower the tasty quirkiness — as fans love the tunes but live for the moments Quinn waxes cynically, ironically and hysterically poetic: “Michigan- a great place to run over deer on the interstate. If you’re into that.”  And his ubiquitous, obscure and always exciting cover choice, this time an Elton John ensemble: “Crocodile Rock” with an interlude of “Can You Feel the Love Tonight”. Possibly inspired by Robinson’s sequins and (faux) fur lined hood? We’ll never know.

Christmas is over, the New Year begun and New South version of roots tunes offered up by the whippersnappers of the genre concluded. It was a warm and fuzzy evening of diverse and varied talent and emotions. A treat for a frigid January night, but we look forward to catching all these acts again as the summer festivals warm up.