After witnessing two raucous sets from openers Zechs Marquise and The Builders and The Butchers, RX Bandits casually made their way to the stage around 10 pm. Set in “Heaven” (The Masquerade has three individual sections within the venue: Heaven, Hell, and Purgatory), RX Bandits performed a dreamy set composed of material from their last three records with a major portion of it dedicated to material from Mandala. The crowd was small, the room was dark, and behind a small white light, RX Bandits poured their hearts into their instruments and rocked each and every one of our little hearts out for almost two hours.

Bassist Joseph Troy and vocalist Matt Embree were the first on stage with the other two Bandits just a few feet behind, and almost as soon as they all grouped up, Embree comically announced, “You hear that? [referring to the band playing upstairs in “Hell”] That’s Russian techno music. We’re going to rock out to that”. And they weren’t kidding! Kicking off with “1980”, RX Bandits immediately got the crowd off their feet as the song gracefully transitioned into “One Million Miles an Hour, Fast Asleep” without a moment’s hesitation. Honestly, watching them play was an experience within itself, talent aside. It became immediately apparent that slimming down to four has played a significant role in connecting the remaining Bandits physically and musically, as they now carry an amazing amount of chemistry throughout their performance that’s hard to match. 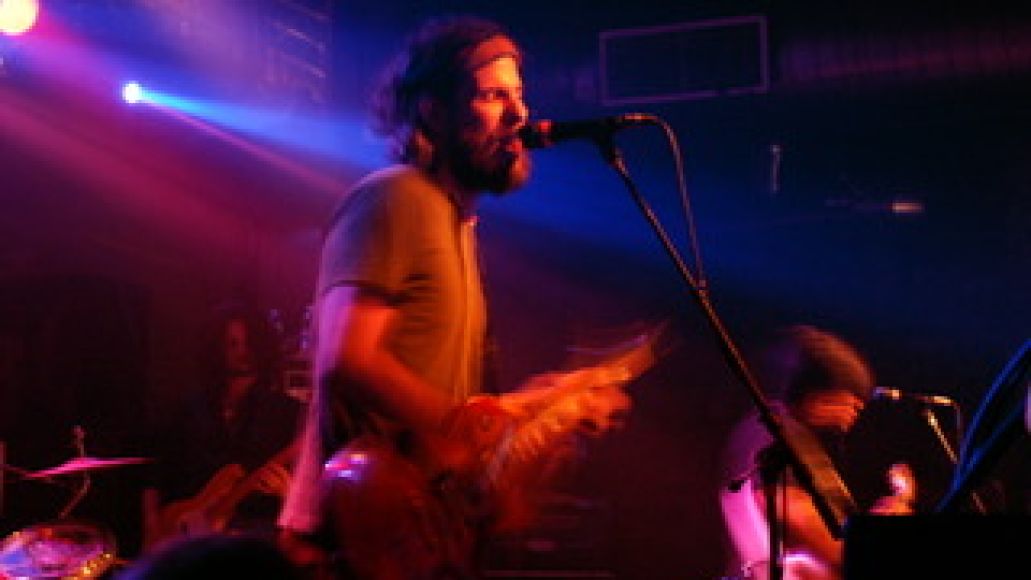 After a few more songs, Embree finally addressed the crowd stating “These lights are making me feel like I’m descending from Heaven and I’m not Jesus” to which a few members of the audience immediately shouted out, “Yes you are!” which Embree couldn’t help but correct by adding, “No, you’re wrong. Jesus was black”. Shortly after, the lights were dimmed and the Bandits got right to it, running through a few more songs before breaking out into the long overdue and much anticipated jam session during “Dinna Dawg”. The stage, already set up for a three-way drum session, saw guitarist/keyboardist Steve Choi hop on one end with Marcel Rodriguez-Lopez (from Zechs Marquise) on the other. Meanwhile, Troy was having a ball raising his arms in panic, clapping his hands and making an assortment of silly hand motions in the air during this epic moment.

Much later, things started winding down around “To Our Unborn Daughter” which Embree dedicated to the “RX Bandits baby” named after the band by a fan whose baby was conceived on the same night she saw them perform one year prior not long after she was told she was infertile by her doctor. Not too long after Embree addressed the crowd once more asking, “Should we play more or just split?” which ignited the crowd into a loud uproar of screams, forcing the band to play a few more as Embree thanked the crowd, high-fiving as many members of the audience as he could reach. Then, to set the mood, Embree asked the light crew to dim the lights once more. This left only the shiny silver disco ball which shone dimly on the crowd, swirling in a slow circular motion like the moon around the Earth. Sadly, they only continued for two more songs, exiting with “Bring Our Children Home or Everything is Nothing”, during which Choi clumsily fell over amidst laughter. After a brief goodbye from Embree, the band slowly exited the stage after he took the opportunity to say, “Thank you very much. We’re called RX Bandits, but I’m sure you know that otherwise you wouldn’t be here. We drove straight from Orlando over night to be here. Give it up for Chris! Not only is he an amazing drummer, but he’s an amazing chef. No, seriously”.

Overall, RX Bandits were a sight to see. The band showcased rare and unmatchable energy throughout their entire performance, subtly signaling to each other as they laughed and played together. It’s clear these guys are genuinely all about the music; it runs in their veins, and they are eloquently illustrating it to the world in the only way they know how. That’s why playing smaller shows work so well for these guys because the audience is as much in sync with the music as they are, joyously rocking out within the moment. I couldn’t have asked for anything more.

Rx Bandits setlist:
1980
One Million Miles an Hour, Fast Asleep
My Lonesome Only Friend
Hope is a Butterfly, No Net Its Captor, She Beats Her Wings and Softly Sings of Summer Scent and Children’s Laughter (Virus of Silence)
Hearts That Hanker for Mistake
Dinna Dawg
It’s Only Another Parsec…
Falling Down the Mountain
Mientras la Veo Sonar
Only for the Night
To Our Unborn Daughters
Decrescendo
Bring Our Children Home or Everything is Nothing