When you’re a musician like Ben Folds, it’s sort of easy to free ball it. He plays just about every instrument and hardly does he ever exhibit a personality that’s anything but friendly. Not just friendly, but family friendly. You sort of feel like his best friend by, oh let’s just say, the second verse. So, there’s little to expect from his live show other than watching a dude do his thing. But fuck me if he doesn’t do it well.

On round two of his three-night, sold-out stint at Chicago’s comfy Vic Theatre, Folds shuffled out to his lone-yet-shiny grand piano, waved hello to the hundreds watching, let out a sigh, and pitched a chummy rendition of Ben Folds Five’s “Twin Falls” to a happy-go-lucky audience. Billed “Ben Folds and a Piano”, the stage presented just that. But you wouldn’t know the difference if you were staring at your feet all night. It’s been said countless times by now, but the guy carries the energy and skill of a full sized band. His personality makes up for any lost space, though.

If there were ever a tour to catch Folds on, this would be it. He’s not only lugged his entire discography, but he’s brought along some great friends, too. Opening artist Kate Miller-Heidke adds so much power to the bill. Safely snug tight behind her keyboard, the Australian vocalist unleashed some highly raw yet truly rich talent, all to new ears. Along with her equally stellar guitarist (and husband) Keir Nuttall, the two shimmied through an enjoyable 25-minute set, chocked full of acoustic pop that felt surprisingly authentic. Like most female vocalists’ efforts these days, her talent is lost in the production, resulting in studio work that comes off as rather staple, forgettable even. On-stage though, Miller-Heidke’s a whole other beast. The notes she can hit should tug at your eyes, while the way she delivers her lyrics, especially on “R U Fucking Kidding Me?”, should charm you enough to smile and maybe even laugh. Set closer “Words” allowed room for both artists to jam equally, though most patrons were on their feet as Nuttall slaughtered his acoustic guitar. Yes, slaughtered. 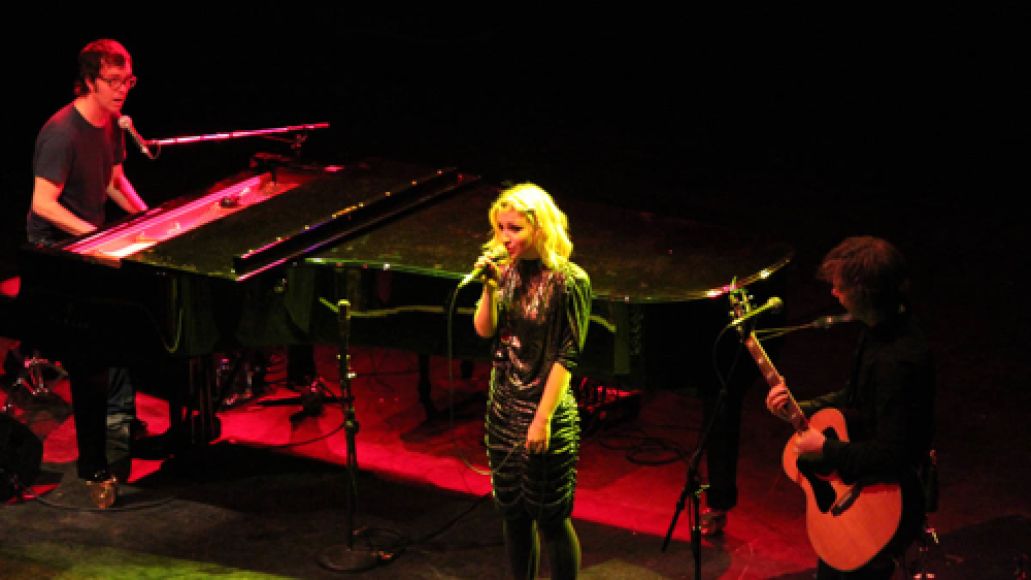 The two returned later in the evening to help out Folds during “You Don’t Know Me”. While Miller-Heidke’s own work could draw comparisons to Regina Spektor, she hardly stuck to Spektor’s style here. Instead, she went off course and had some fun, deciding to let her vocals scratch the ceiling, sit at the back bar, and warm up some vagrants in the alley nearby. When they left Folds to his repertoire, you could tell from the Chicagoans’ applause that she was more than welcome to stay longer.

They didn’t though, but Folds kept the crowd busy. Between asking for help during a three-part harmony on “Bastard”, digressing on his new material he’s worked on with author Nick Hornby (both “Practical Amanda” and “Levi Johnston’s Blues” sound exceptional), and instigating an uber-sing-along during a cover of The Postal Service’s “Such Great Heights”, Chicagoans had their work cut out for them. It wasn’t a hits-filled night, either. That was Monday. Instead, Folds dusted off some rarities, which included an entire encore dedicated to his former band — you know, Ben Folds Five.

But it didn’t matter what he played. He could have spent 28 minutes noodling around on his piano, or humming McDonald’s melodies, and the crowd would have licked it up and smiled the same stupid smile. That’s not a negative criticism or even a positive one. It’s just an observation, but it’s one that reveals the type of entertainer he is. Folds plays like a friend, and because of this, it’s less about the music and more about the feeling. By night’s end, you feel good… really good. If you ask me, that’s worth all the money in the world.

Especially the price of a single concert ticket.