Quentin Tarantino’s 1994 epic Pulp Fiction is easily one of the greatest films to come out in my lifetime. That is a bold statement, but one that I am incredibly comfortable making. There wasn’t a movie made like it before and hasn’t been one since. The story line is twisting and fractured and constructed in such a way that you still marvel at it (even despite its imitators since). The film contains some of the greatest performances by the actors involved. Three of the main characters were nominated for Oscars (John Travolta, Samuel L. Jackson, and Uma Thurman), and had it not been for Forrest Gump coming out the same year, the film probably would’ve won Best Picture and Best Actor (Travolta) to go along with its Best Screenplay award.

The final track on the collector’s edition of the soundtrack is an interview with Tarantino about the music he chose, and why he chose those particular songs. If you can get passed the stammering and randomness glory that is a Tarantino interview, he says some great things about the soundtrack. Right from the start, he discusses how he picks songs for soundtracks. Tarantino states that picking songs is one of the first things he does when he is making a movie. During his writing process he goes to his record collection and starts finding songs that would be the “spirit of the movie” to help him further his writing. He tries to find the songs that will tell the story almost on their own. He views soundtracks as stand-alone pieces of work and “mini offshoots of the movie”, almost supplements to the film or DVD extras, as it were.

One of the greatest things Tarantino does with Pulp Fiction’s soundtrack is create a mix tape for the film. An actual mix tape. Like one he would give his friends for their own enjoyment. He says of the Pulp Fiction soundtrack, “This could very easily be a Quentin tape!” He wants to make it more than just a collection of songs. He wants it to be fun and have a personality. This explains his choice to include some memorable dialogue from the film on the album. The soundtrack includes tracks for John Travolta’s character Vincent Vega and Samuel L. Jackson’s character Jules Winnfield talking about the hash bars in Amsterdam and “royals with cheese”, their conversation about why Julius doesn’t eat pork, and also Jackson’s epic quotation of the Bible verse Ezekiel 25:17. He also includes short snippets of dialogue that come from scenes where the song is played. Tim Roth and Amanda Plummer’s dialogue about robbing the restaurant before the epic opening track “Misirlou” by Dick Dale and his Del-Tones, and the introduction for the twist competition before “You Never Can Tell” by Chuck Berry are among others. The inclusion of the dialogue completes that mix tape feeling. Hell, I know I used to make mix tapes with lines from famous movies in them when I was in middle school and high school. It makes perfect sense to me.

The songs go hand in hand with the corresponding scenes. It’s seamless, really. The moods that Tarantino is able to create with music, and that includes silence too, are spot-on. The surf music sets the time and mood without being too overwhelming. Tarantino mentions in the interview that he picked surf music because to him it sounds “more like a spaghetti western than surf music,” and that he doesn’t understand what surf rock “has to do with surfing in the first place.” The surf rock combined with songs like “Let’s Stay Together” by Al Green, “Jungle Boogie” by Kool & the Gang, and “Lonesome Town” by Ricky Nelson tell you that it’s the ’70s without cramming it down your throat. You know… like the Forrest Gump soundtrack. The songs also give you insight to the scenes and characters, as well: Bruce Willis’ character Butch Coolidge singing “Flowers on the Wall” by The Satler Brothers, or “Let’s Stay Together” playing while Marsellus Wallace (Ving Rhames) and Coolidge are discussing fixing the fight, for example.

Most, if not all, all of the songs have been cemented into the social conscious and tied to this movie. “Misirlou” will always ring back to the opening sequence of this film. The excitement built from the discussion of the diner robbery explodes into the opening guitar riff of the song and the opening credits perfectly. Tarantino describes the feeling by saying, “You’re watching an epic. You’re watching this big old movie…just sit back.” Urge Overkill’s cover of Neil Diamond’s “Girl, You’ll be a Woman Soon” is tied in with Uma Thurman’s fantastic dance sequence/overdose scene. And no one can ever think of “Comanche” by The Revels without thinking of sodomy. It’s an unfortunate thing to be remembered for, but Tarantino places it in the movie beautifully. The song gives me chills every time. Not in a good way at all, either. Tarantino claims that if you put the right song in the right scene, it’s “about as cinematic a thing as you can do…you can’t hear the song again without thinking about that scene in the movie.” He is exactly right. 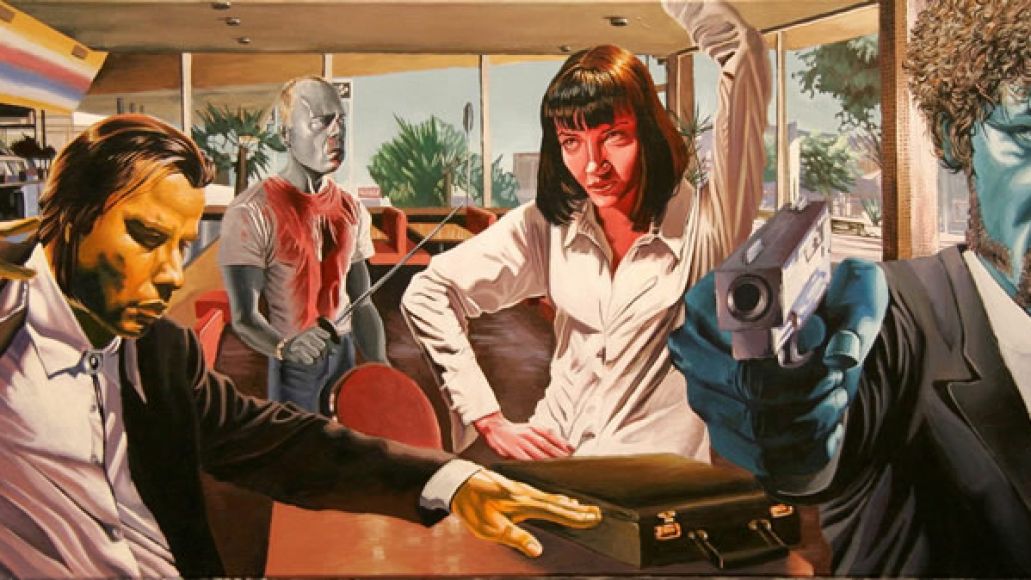 The soundtrack itself, separated from the film, is in fact a stand-alone piece. The songs flow into the other easily and comfortably. Even if you have never seen the movie (in that case…why?!), you can still feel its spirit throughout. The soundtrack has a vibe and movement all its own. When you take the film into account, it is the quintessential soundtrack. No song feels out of place, or even forced. What’s more, there isn’t a tune that takes away something from the scenes. It adds, supports, and enhances every detail. Like the movie, the soundtrack is a diamond. Now, to more important matters, who here hasn’t seen it?