Though he’ll be here in a few months, frontman Julian Casablancas stopped by Chicago last night amidst his solo tour. Still in support of last year’s vastly underrated Phrazes for the Young, the aging-yet-youthful New York crooner entertained a well-stocked crowd at the always popular Vic Theatre. Despite being a Tuesday night, and after a holiday weekend no less, plenty of Chicagoans treated the gig as a mid-week dance party, keeping the nearby bar warm and their hands cool with cup after cup of icy beer. Quite surprising for an all-ages show.

Let’s preface this review, however, with a disclaimer. All-ages shows receive quite a bad rap these days. Sure, they’re usually flooded with idiot 15-year-olds, all who chat incessantly and push and shove towards the front, but they act as a grand buffer. To what exactly? The even bigger idiots over 21, who usually sing obnoxiously and fall over on one another. In Chicago, we call them Cubs fans. (Don’t believe me? Start riding the El on Friday afternoons this month.) But, that’s a whole different argument in itself. Bottom line: All-ages shows can either ruin your night, or save ’em. In this case, the latter. What’s more, the youthful audience actually enjoys the show, rather than stand there like a lifeless hipster. There’s nothing like watching a great act with hundreds of fans who do nothing but stand around looking depressed or like an extra in 1978’s Dawn of the Dead. Wake up, dammit. End of disclaimer.

From the get-go, things rolled fast ‘n’ steamy. Los Angeles quintet Funeral Party pitched an amicable opening slot to the hungry masses. At first glance, the group looks like a bastard stepson to The Killers or The Bravery, and on first listen you would think they were a New Order cover band. But frontman Chad Elliott throws a curve ball. The short, energetic singer, who shares a slight resemblance to Emile Hirsch, ricocheted across the stage like an overemotional actor. When he wasn’t crying into the microphone or catwalking on the lip near the audience, he was falling onto the bass drum for some angsty push ups. Very entertaining to say the least. And while songs like “Chalice”, “Youth in Poverty”, and “The End of My Life” hardly offer anything new and intriguing (which admittedly is dangerous in this inundated market), they came off as just downright fun. Someone just tell guitarist James Torres to leave the hoodie in the dressing room. Who the hell wants to look like Pete Wentz these days? 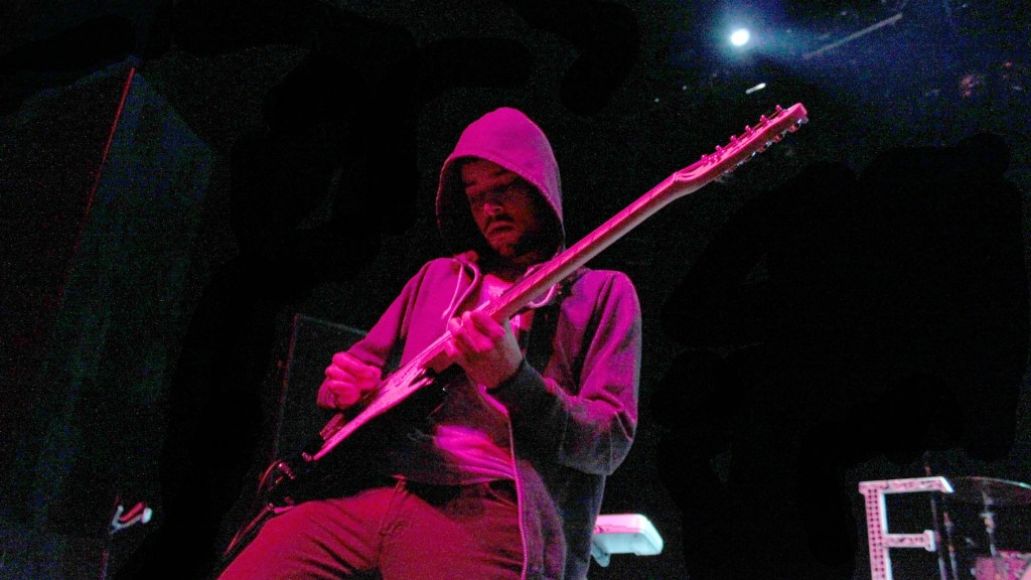 Following a hellishly long 55-minute set up, which oddly enough was actually longer than the set itself, the house lights dimmed and Casablancas strolled out. Wearing tight red jeans, a rhinestone-studded leather jacket, and a drink in tow, the garage-rock hero shimmied up to the mic from behind a mop of multi-colored hair (can’t forget the feather, too). As if to make up for time, the six members behind him jumped right into a heavy-handed, punkish number that must be new. The untitled song dazzled under a blanket of strobe lights and as Casablancas rattled off on carrying his love “from the west to the east”, he made his way to the edge, where fans reached out as if to snag him for themselves. He may have been out of the spotlight for the last couple of years, but he’s been in plenty of teenage female fantasies these days. The screams alone proved that.

“So what’s going on guys,” Casablancas asked, after taking a stroll down “Ludlow St.”, to which nearby fans uttered various answers. He laughed some, adding, “You know, I fucking love this venue.” Short words from an atypically quiet, morose fellow. In fact, this sort of banter proliferated as the night aged. Some rambling became repetitive (“What’s up?”), while others just felt too honest (“I don’t know what I’m doing”). Regardless, while he waltzed about in a seemingly drunken stupor between songs, he hit every tune with precision. 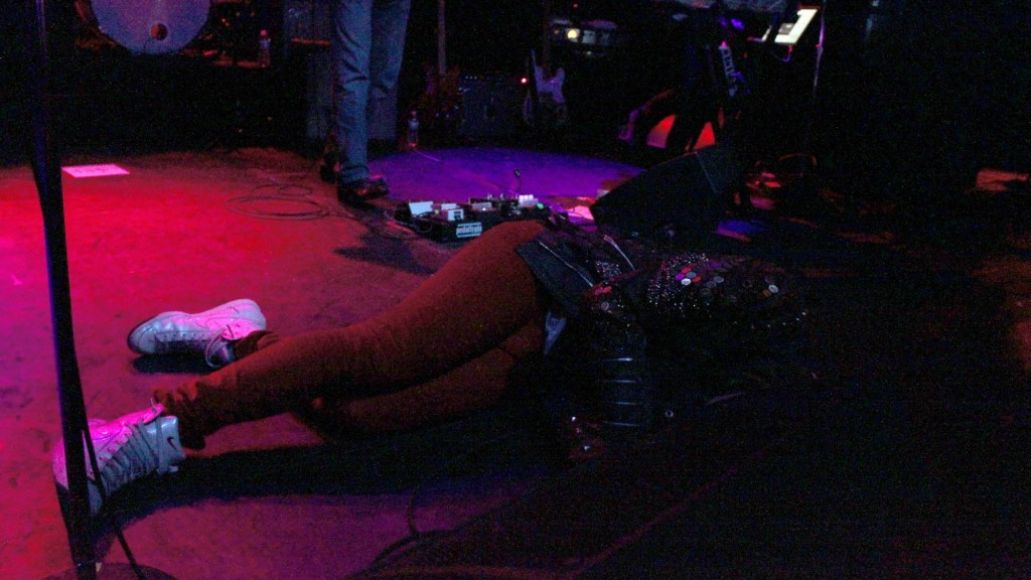 “River of Brakelights” rained down hard, “11th Dimension” ignited a fiesta, “Glass” left many in a warm haze, and when he surprised folks with The Strokes’ Is This It hit, “Hard to Explain”, fans on the floor just went apeshit. The latter seemed to bother him, though. Not the song, the idea of the band. It’s as if the song’s inclusion opened up a sore that burned a little.  It sort of did. Immediately after, fans started shouting out requests (“New York City Cops!”, “Someday!”), and Casablancas shied away from the mic, turning somewhat cynical. When one fan managed to grab his attention (“What do you think about Lollapalooza?”), Casablancas jokingly spit back, “You mean Chicagopalooza? I don’t.” Seconds after, he summed up the night perfectly: “I make inside jokes that nobody gets, but I quite enjoy them.” 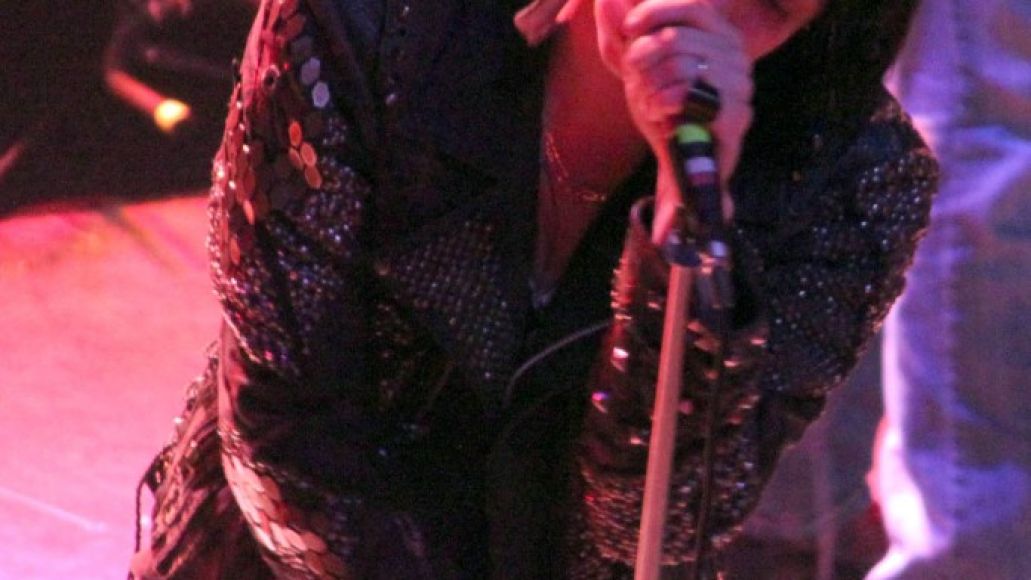 Right on cue, the band left the stage, leaving Casablancas and his pianist alone to a light cover of The Strokes’ “I’ll Try Anything Once” (B-side off of 2006’s First Impressions of Earth). It sounded like a completely different song, actually. Yet despite its differences, fans still sang at the top of their lungs and the whole thing became a campfire sing-a-long. That wouldn’t be the last of the covers, however. Thanks to a glitch with one of the keyboards during the start of “4 Chords of the Apocalypse”, Casablancas instructed the band to play the holiday SNL goodie, “I Wish It Was Christmas Today”, instead. The punkish rendition sent fans into a frenzy and a few kids even crowd surfed.

Things ended on a slower note, however, starting with the lyrically profound album closer, “Tourist”. Casablancas’ more recent shows have sported an acoustic rendition of the song, but the full band brought out the chin nodding, boot stomper to play. “One in 10 are passionate about it,” he said, while introducing the track. “This one’s for you.” Self deprecation? Maybe. It’s hard to read him. Though one would think he’d be a little more fired up (this is his solo tour, after all), but in hindsight, when has he ever been anything but a low volume sort of guy?

It’s not like he doesn’t enjoy what he’s doing, either. Someone who’s apathetic or bored doesn’t do two encores, which is precisely what he did. With the finicky keyboard back up and running, Casablancas gave his thanks, waved to the crowd, and nailed the set closer, the ballad sweeper “4 Chords of the Apocalypse”. While he kept his eyes shut throughout most of the song, he exhibited an energy that reeked of passion. As he snarled out, “It’s nice to be important, but so close to being despised,” you could almost hear him retching inside. Call it over thinking, but from the sounds of it, it seems like he’s battling some nasty inner demons. Come to think of it, perhaps these songs speak more than they should.

Let’s just hope we won’t be pissing on any casket soon. No, really.

Setlist:
New Song (“When the lights go down…”)
Ludlow St.
River of Brakelights
Left & Right In The Dark
Hard to Explain
Glass
11th Dimension
I’ll Try Anything Once (Julian & Jeff at piano)
Out of the Blue
I Wish It Was Christmas Today (SNL cover)
Tourist
4 Chords Of The Apocalypse