School functions suck. Remember the ice cream socials in middle school? What about the bullshit senior prom? It’s a good thing colleges these days are hip enough to throw something together worthwhile. Case in point: Northwestern University.

This past Friday, something around two thousand students gathered at Chicago’s Riviera Theatre, where bright yellow school buses juxtaposed themselves against beatnik, zombie-looking drug dealers. Pretty picture aside, the long line that jettisoned out of the rundown venue’s doors created quite the chaotic scene under a marquee that listed: Passion Pit & Talib Kweli.

Although 20 minutes late, rapper Talib Kweli arrived to friendly vibes. Hundreds of twentysomethings, mostly those in the front, followed his every command as he blasted through an hour set that honestly felt like 30 minutes. Kweli stuck close to his past material, naturally whisking through his supporting work (including Kanye West’s “Get Em High”), though he did leak out a few goodies off his forthcoming Reflection Eternal record, Revolutions Per Minute. Keep your ears out for “Strangers (Paranoid)”, a track that not only drove the crowd into a frenzy, but brought a round of applause, too.

Some short change later, the opening notes of “I’ve Got Your Number” rung out, calling forth the Boston band that’s been sweeping the live scene for the past year. It took some time to hear ’em actually play, given the crowd’s deafening screams, but a minute or two in, things turned from a choir of fans into an all-out dance party. Stuck behind his synthesizers, Ayad Al Adhamy set the pace for the evening, managing to segue “Make Light” into “The Reeling” flawlessly and without skipping a beat, which kept frontman and vocalist Michael Angelakos on his toes. 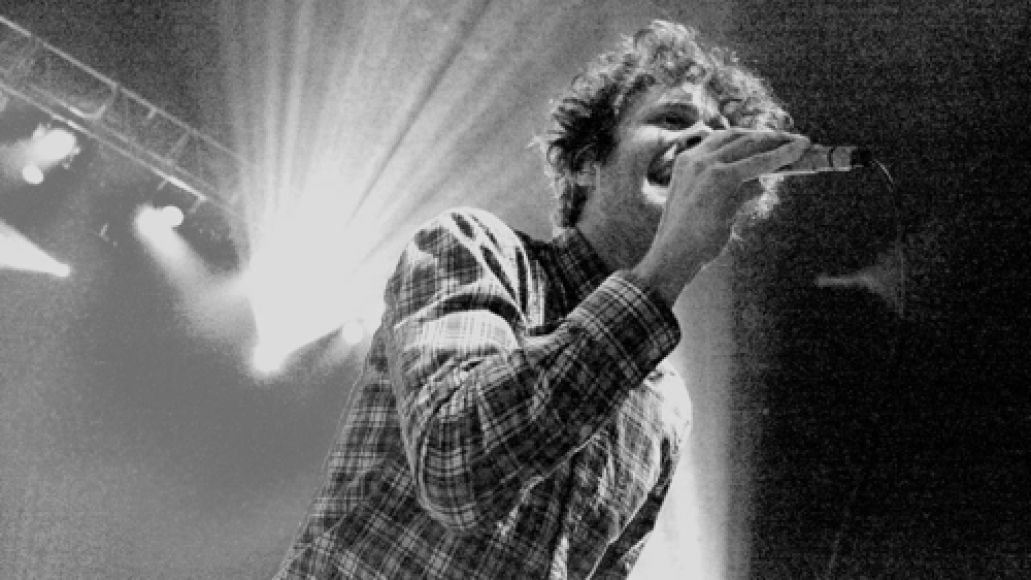 “I have a little bit of a sinus infection,” Angelakos admitted, throwing out the first of many thanks to the Northwestern-flavored audience. Despite his illness, the now-lanky singer (Seriously, touring has stretched him bone thin!) paraded about the stage — at one point going so far as to climb the stage’s right speaker — and hit most of the high scaling notes. Impressive? We’ll go with damn endearing.

Most present will argue that the group’s agreeable encore of “Sleepyhead” birthed the night’s major highlight. Keep in mind that every soul in attendance demanded it. However, the initial closer of “Smile Upon Me” into “Little Secrets” saw the set truly peak. When Angelakos screamed out, “I want every person to put their hands up,” the audience did him one better. They chanted along, they threw their fists up, and they danced the best way a predominately white crowd could.

Kudos Northwestern, ice cream social this was not.

Passion Pit setlist:
I’ve Got Your Number
Make Light
The Reeling
Moth’s Wings
Swimming in the Flood
To Kingdom Come
Let Your Love Grow Tall
Folds in your Hand
Smile Upon Me
Little Secrets