Surprise, surprise… Chicago got cold again. Not that anyone’s really surprised. It’s just hard to gauge what the fuck to wear sometimes. One day it’s a humid 80 degrees and the other it’s something below 40. Can you comprehend that? Of course not. But Midwesterners survive it day in and day out, year after year. They turn to the finer things in life, like beer, fried food, (likely horrific) pre-marital sex, and — as anyone would — music. A good few hundred Chicago folks turned to the latter Friday night when they flocked to the always-lovable Empty Bottle.

Could you blame them? Look at this bill: Beaters, Male Bonding, and The Soft Pack. Christ, it’s a wonder the place didn’t burn right down to the ground.

San Diego’s Beaters ended its tour with a flood of distortion and a nice pop ‘n’ bang. While Jeremy Rojas’ vocals creeped a little too low to the floor, the sound remained impressive enough to round up a sizable audience, especially so early in the night. Keep an eye out on this quartet, they’re bound to blister the headlines in months to come.

Riding high on some recent press and accolades, tropical grunge rockers Male Bonding saddled up to the stage (borrowing the Beaters drum kit), nodded to the sound guy, and hammered out a quick yet intimately loud set. By quick, we’re talking 20 minutes tops. But that’s okay, the trio who hail from the UK (Dalston, a neighborhood in London, to be precise) only have an album to work with, and like most acts in their genre, it’s relatively short. That didn’t stop them from gnawing at the crowd. Pulling from their forthcoming debut on Sub-Pop, Nothing Hurts, songs like “Pumpkin”, “Your Contact”, and “All Things This Way” tugged at everyone’s heads, forcing them to bop about. The real highlight, however, came when vocalist and guitarist John Arthur Webb strummed away at “Franklin”, hands down the group’s best song, cooling everyone down in a rare moment for the night. 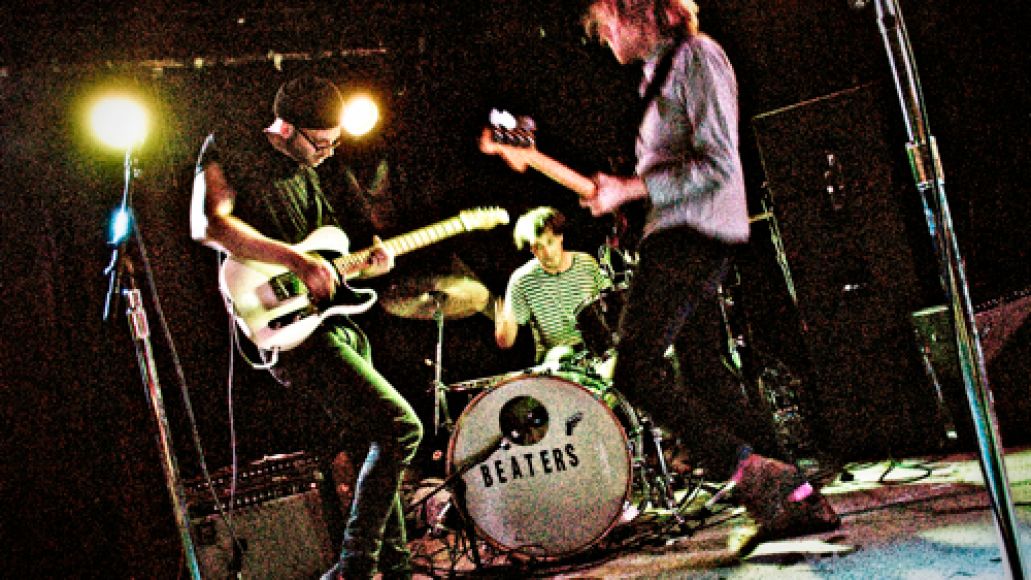 Twenty minutes after, four more San Diego-ans took the stage. Sometimes you can tell when a band’s just about to crack the surface and fly high. (I’m sure everyone in Brooklyn counted down the hours ’til ‘Vampire Weekend’ ruled the nation… shortly after their initial live debut.) Let’s just say The Soft Pack should be taking flight soon. Once vocalist Matt Lamkin tipped off the set with the ultimately catchy “C’mon”, the remaining 13 songs rolled off so natural, and with such enthusiasm, that few could stand there watching without thinking, “Shit, I really fucking dig this band.”

Fans danced, broke a sweat, swigged beer, applauded between each verse, and sang louder and louder. During the very Joy Division-esque “Parasites”, several Chicagoans let loose their inner sunshine, and thus the Empty Bottle became a set piece for some Frankie Avalon picture — only no beach balls were to be found. Outside the music, though, the California kids really know how to have fun. Lamkin comes off like a zombie (at one point he started sniffing markers, did anyone else see this?), but he never appears a.) pretentious, b.) dickish, or c.) unlikable. He’s reserved, but it’s sort of a-typical. Besides, what frontman leaves his band to have a beer with the fans below? Yeah, he did that, during “Pull Out”, which saw Beaters’ drummer Andrew Montoya join them in a set closer that wasn’t necessarily epic, but pretty damn cool.

Funny thing, the frosty midnight air didn’t seem to hurt so much on the way out. How about that, huh?

The Soft Pack setlist:
C’mon
Down on Loving
More or Less
Extinction
Rite + Wrong
Faithman
Parasites
Nite Life
On My Time
Beside Myself
Mexico
Brightside
Answer to Yourself
Pull Out (w/ Andrew Montoya)
——