“Let’s make this the greatest Wednesday night of our lives,” declared frontman Patrick Stickles, before diving head first into “A More Perfect Union”, album opener for his band’s recent diamond, sophomore effort, The Monitor. Take a picture, stare really hard, or just unhinge that jaw for a second. You’re experiencing a landmark event in rock ‘n’ roll history. The era of Titus Andronicus has begun and for the first time in a long, long while, brutally honest music blesses our ears.

Chicago gets it; otherwise, why else would hundreds of fans flock to the Bottom Lounge on a Wednesday night? A cold one at that, too. Because in this day and age, people need something real to hold. When artists crawl out from under every nook and cranny, things get stuffy. It’s doubtful the folks behind Titus Andronicus “know” this. It’s even more doubtful they set out to correct it. Whatever the case, this impeccable quintet from Glen Rock, NJ have stumbled upon something true, righteous, and indelibly important for music today. They’ve assembled perfection without trying. That’s pretty much the only cliche about them, really.

Supported by a fairly strong bill of locals (The Saps and Bully in the Hallway), Titus Andronicus had little to no problem making new fans in the Second City. They’ve been here before, after all. But this time around, they came in riding off a sick wave of buzz and hype. As a result, several spectators witnessed the group for the first time. Most stood in awe, though a few decided to join the roughneck mosh pit that formed center stage. One new fan concluded afterward: “It was like watching one giant beard performing.” She’s alluding to Stickles’ Civil War-esque facial hair that continues to make its journey to the ground. Some might say it’s excessive. One thing’s for sure, it certainly adds character. Though it’s not like he needs it. The straggly frontman exudes a vibrant, erratic style, the sort that warped geniuses inherit throughout childhood. He’s like, and Lost fans will appreciate this, mathematical savant Daniel Farraday, only on speed and opting to wear a worn-out Abe Vigoda shirt over a black skinny tie and button up shirt. To wrap up the assessment in a quaint, little box: He encapsulates the rogue, disparate anti-hero we all want to look up to. 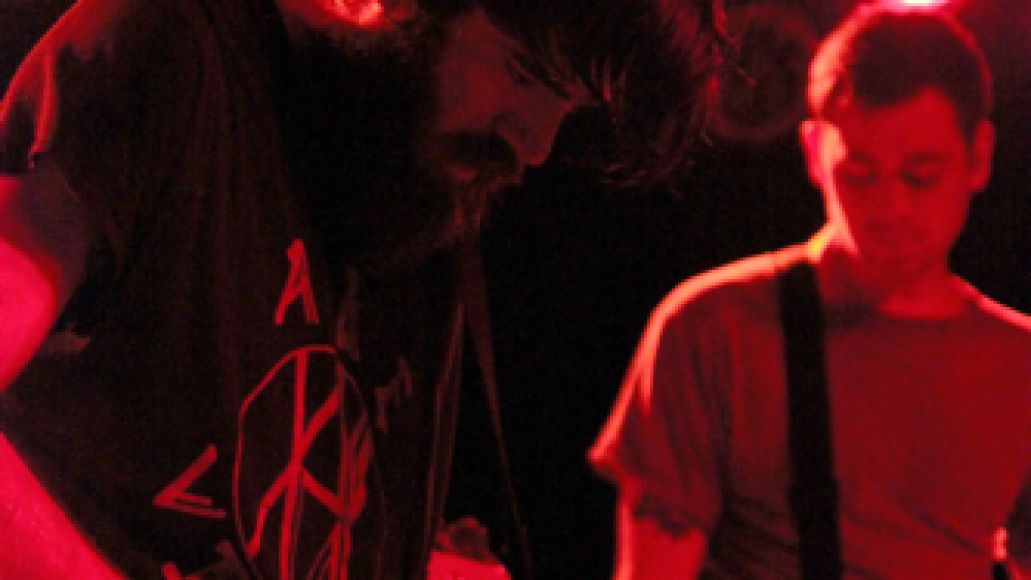 He took us on quite the journey, too. In addition to this year’s The Monitor, much of 2008’s The Airing of Grievances flooded the set as well. The combination of the two efforts equaled one hell of a set, chocked full of adrenalized cuts that sent shivers up feet and drew warning signs to the heart. Oh, how Stickles injected emotion, too! He had a lot to work with, that’s for sure. Between the disheveled American flag draped over the keyboards or the chants of “USA! USA! USA!” from the hundred or so fans below, the lanky frontman fed off this genuine sense of nationalism that embodied the night. He just provided the perfect rallying soundtrack.

“A Pot in Which To Piss” saw him tearing up a troubled past, the dedicated “Fear and Loathing in Mahwah, NJ” asked of nothing more than blood, sweat, and tears, while the band’s namesake track “Titus Andronicus” blindsided everyone who had stood patiently prepared. (You can thank keyboardist David Robbins for that.) It’s not a situation where these songs come to life on-stage — they walk and breathe on record too — it’s just that they attack you. A punch over a pinch, if you will.

Stickles isn’t alone, either. “Richard II” wouldn’t be as epic without Eric Harm’s drumming shuffle. The same goes for the multi-talented Amy Klein, whose violin work in “Upon Viewing Bruegel’s ‘Landscape with the Fall of Icarus'” nearly yanks tears from the ducts. By the time the five reached the sprawling 14-minute epic, “The Battle of Hampton Roads”, everyone wretched the spotlight from one another. Except for maybe bassist Ian Graetzer. He sort of just stands there observing, and it’s rather disconcerting, but it makes for one hell of an edge. One that cuts slowly; you know, the dangerous sort.

They could have ended with the Chuck Berry-infuenced “Titus Andronicus Forever”, but here’s the thing… they don’t want to stop. Now, before you roll your eyes and scoff and scream, “Oh gimme a fuckin’ break,” hear me out. The next time you happen to see this band, look really hard into Stickles’ eyes. (That is, if you can. They’re only going to hit up larger venues as weeks pass.) You’ll see a tired, beleaguered performer, one who’s slowly drifting away both in mind and body. This may sound tragic, it might even sound sad, but if you shift down just a bit, you’ll see he’s smiling. This is where he belongs. This is, to paraphrase Shakespeare, his fate crying out, making each petty artery in his body, well, stone cold. Eh, it’s something to that effect, but you get the point. No? How about this? Beard or no beard, there is no petty man to be found, only a true artist. Okay, that should suffice.

Setlist:
A More Perfect Union
Joset of Nazareth’s Blues
A Pot in Which To Piss
Upon Viewing Bruegel’s “Landscape with the Fall of Icarus”
Richard II
Fear and Loathing in Mahwah, NJ
No Future Part Three: Escape From No Future
Titus Andronicus
My Time Outside the Womb
The Battle of Hampton Roads
Titus Andronicus Forever
Four Score and Seven
——