Whoever booked Yeasayer and Javelin together for a tour knew exactly what they were doing. Set to be a night of non-stop psychedelic 80’s throw back jams, Yeasayer brought the bohemian Genesis of Odd Blood, and Javelin’s lush drum and bass instrumentals with a block party vibe opened the show. To not dance was impossible, and D.C. seemed to have the most fun it’s had in some time.

Javelin is what happens when you mix Brooklyn dudes with a love of 80’s hip-hop and, well, Yeasayer.  It’s chill-wave with 80’s synth energy and groove, like on the infectious and smooth “Vibrationz”. Using mostly samples, and an ace on the drum pads, they danced, sang and rapped through their favorite old school, and nineties hip-hip influences with indie electro beats popping them up a bit. “On It On It” broke out the cowbell with the man behind the electro drummer George Langford doing the running man with a little pop and lock as he worked the sticks. Live, without the production, they put on a show, as they said it, “Like a house party”. Tom Van Buskirk handled most of the keys, but left much to a pre-recording so he could take the front man duties full on. He sounded great through the set as he sang, danced, and rapped his ass off, entering in a slick synth line here and there for bonus points. 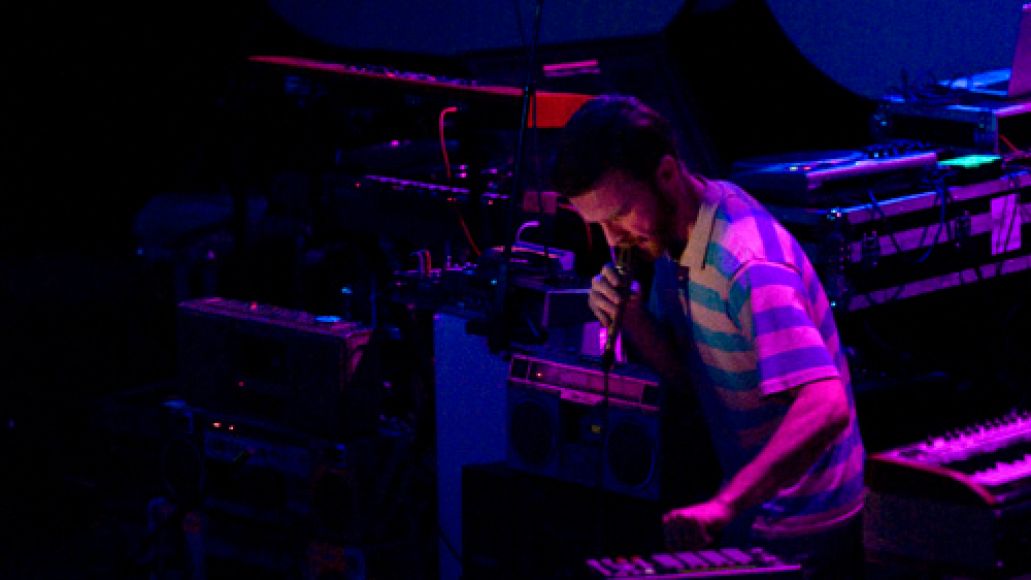 Behind them, a projection showing old commercials from the era they were adoring added a bit of novelty to it all, but the music made it too hard to stand still. Dancing and playing through the quick set, they stuck to the bounciest tracks from their just released debut No Mas, and seemed to be having the best time ever while doing it.

Yeasayer walked out in a glow of soft flashing greens, pinks, and blues. Four rectangular screens not much taller than the band lined along the back of the set, with two glowing columns holding up some of the keyboards out front. The show opened as Odd Blood does with “The Children”, and it was a warped way to start the off the wall night. 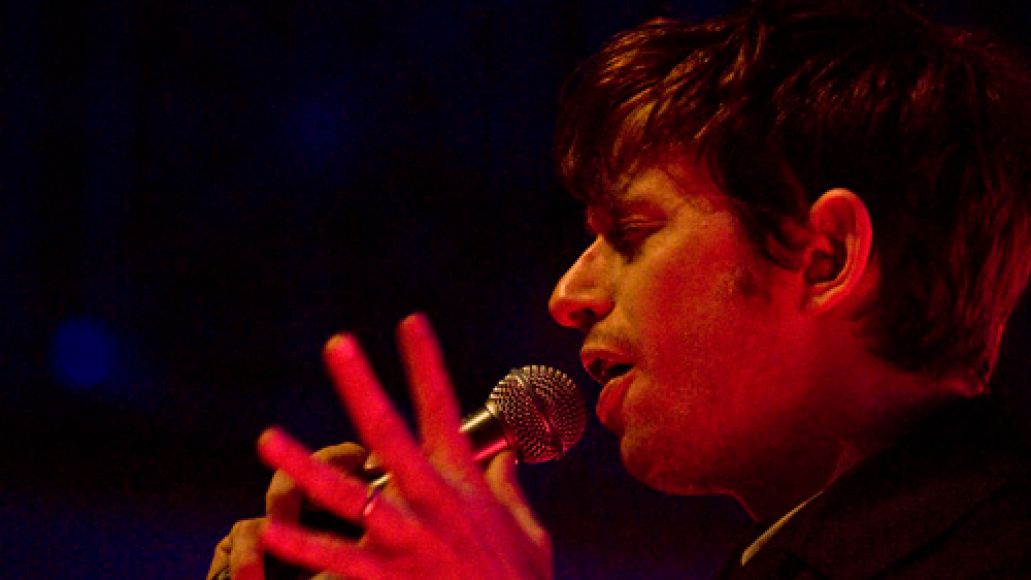 The springing beat of “Rome” was the first to get our feet moving with its hyperactive rhythm. By “Wait for the Summer” you could tell this was going to be a real show, and not just a replay of their records. That’s just not their style, as they use the potential in their songs to build and experiment live no matter how concise one may sound on record. Guitars were crunchier and beats were heavier, giving you a whole new way to see their songs. From a organic, stripped down version of “2080”, Yeasayer built up the audience with “Love Me Girl”, and broke out the funk with “Mondegreen”. All this was leading up to the energy bubble that exploded for “O.N.E.”. Everyone form the floor to the balcony was noodle dancing and jerking around, the audience closest to the stage jumping constantly through out.

Old tracks were revamped to fit closer in with the new material, and even the new stuff was built upon for a truly alive experience. The harmonies and vocals were spot on as Chris Keating and Anand Wilder sang with soul. Ira Wolf Tuton showed off his fancy fret work on the bass, the clincher being the added solo during “Ambling Alp”. “Strange Reunions” took things down a notch and helped close out the night with “Ambling Alp” ending the pre-encore set. A deafening roar from the audience brought them back onstage, and the night closed with a heavier, murkier take on “Sun Rise” giving us one more chance to bob and shake around.

Yeasayer and Javelin did a great job this past night moving the audience beyond what they got on record, proving themselves well as live bands. They know how to throw a party and wow an audience, giving them a real show that lives up to the hype. For Yeasayer it was a way to rediscover old favorites, and show off the new stuff. All of Odd Blood was played and jammed on giving you something to remember the next time you put on the album. Javelin made off more than fine as well, easily scoring new fans and setting the night up perfectly for the main event. Their debut record was well represented live as they brought us back to a decade most the audience wishes they were born for.

It’s a big deal when you get D.C. out of their cement shoes and actually moving at a show. For some reason we’re just a tough crowd, but last night at the 9:30 club proved we have a soft spot after all, and can actually freak out a little. This may only be the beginning of the U.S. portion of Yeasayer’s tour, but already it’s absolutely a show not to miss. 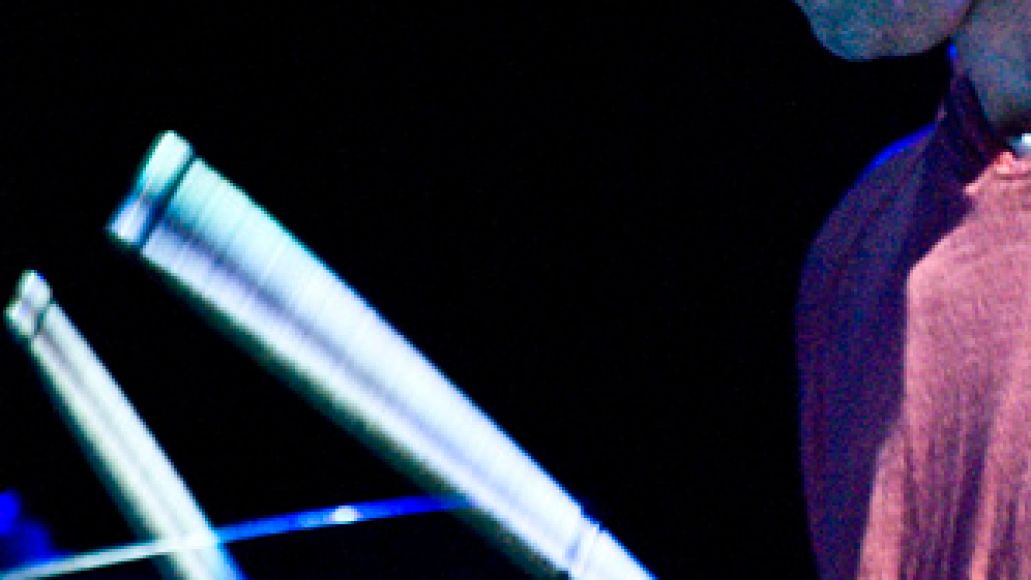 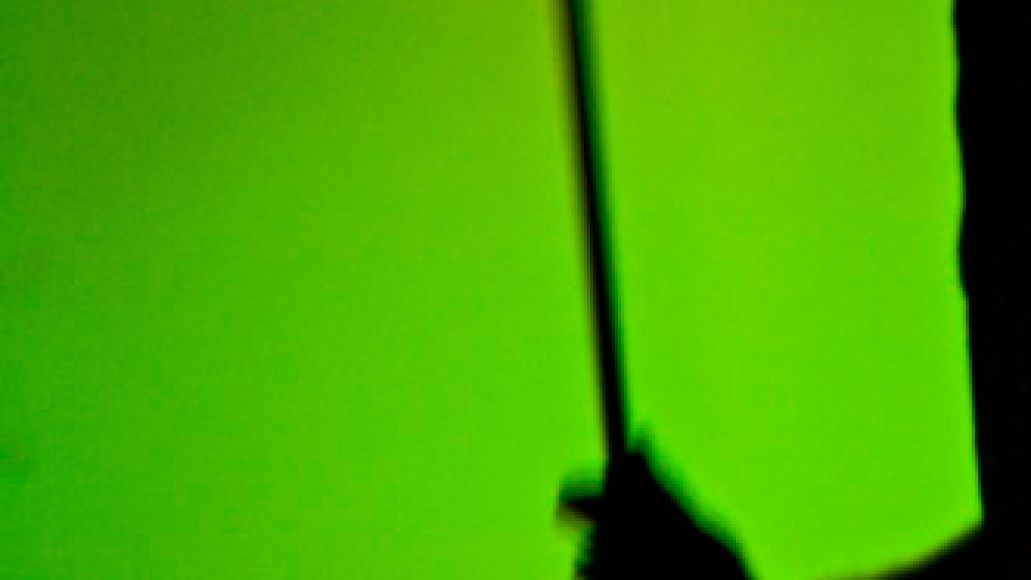 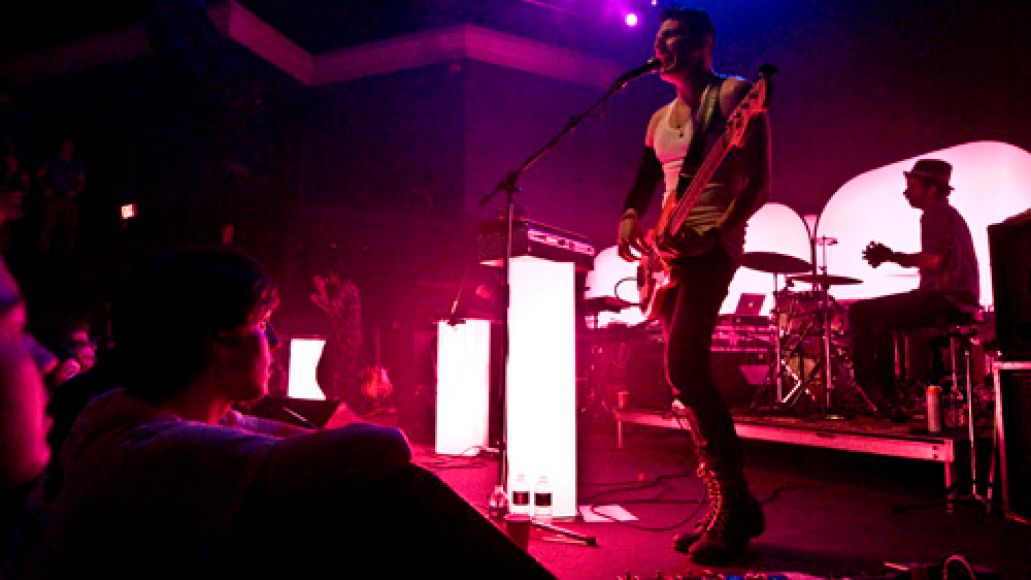