“You need to check out this disc, Live at Planet X,” my friend Kevin said after returning home from his freshman year of college. “This is as raw as it gets.” Kevin might tell a lot of far fetched stories, but this was something he was dead-on balls accurate about. This live, one-track album was a concert masterpiece from MF Doom, an MC who sported a metal mask who I knew nothing about…back then. MF Doom has become the most outstanding rhyme-spitter in the past few years due to his gritty production, bizarre samples, amazing linguistic ability and mystique as an artist. The rapper born Daniel Dumile has begun to conquer the hip-hop world, and if he keeps his act up long enough, he might become one of the pioneers of the modern music form.

Recently, friends and I discussed exactly who the actual hip-hop pioneers were. Dr. Dre, Jay-Z, Chuck D, the recently deceased Guru, 2pac, Biggie and Snoop Dogg changed the way we listened to hip-hop over the course of its existence. MF Doom has brought forth new elements to the game, with little to no airplay, yet any rap fan with half a brain has some idea of who he is. After all, the guy did have his on shoe on the market (I believe they were clear). When we began talking about who is changing rap today, some people mentioned Lil’ Wayne, but a majority of us argued MF Doom is a modern day rap prophet. My childhood best friend simply stated this to support his argument, “On the song ‘Kookies,’ Doom says, ‘Don’t mess with the Ritz bits/wheat thins/saltine triscuits.’” And that right there says it all.

MF Doom is a different breed of MC, in a time where mainstream hip-hop is all about money, cars, purple drink, bling, obnoxious and ugly dudes saying “Yeah!” really loud, and worst of all, modern sampling (let’s just say my lunch came up when I heard that “Let’s Go” song sampling Ozzy). MF Doom is constantly in character as the man behind the metal mask. While most rappers portray the image of gangsters with a bad rep (50 Cent), businessman-like geniuses (Kanye West), or fucked up idiots (everybody else), MF Doom is the super villain, with a Dr. Doom metal mask that he even wears in press release photos. Most notable would be a shot of him and Madlib smoking a blunt together, with the mask on. He’s not a gangster, or a drug dealer, he’s a god damn comic book character. He raps about things in the most intelligent form of metaphors and cultural references, all over (mostly self-produced) beats which feature samples from old monster movies, classical, jazz and sound as gritty as the streets that made him. MF Doom is either the hero, or the anti-hero, of modern day rap. 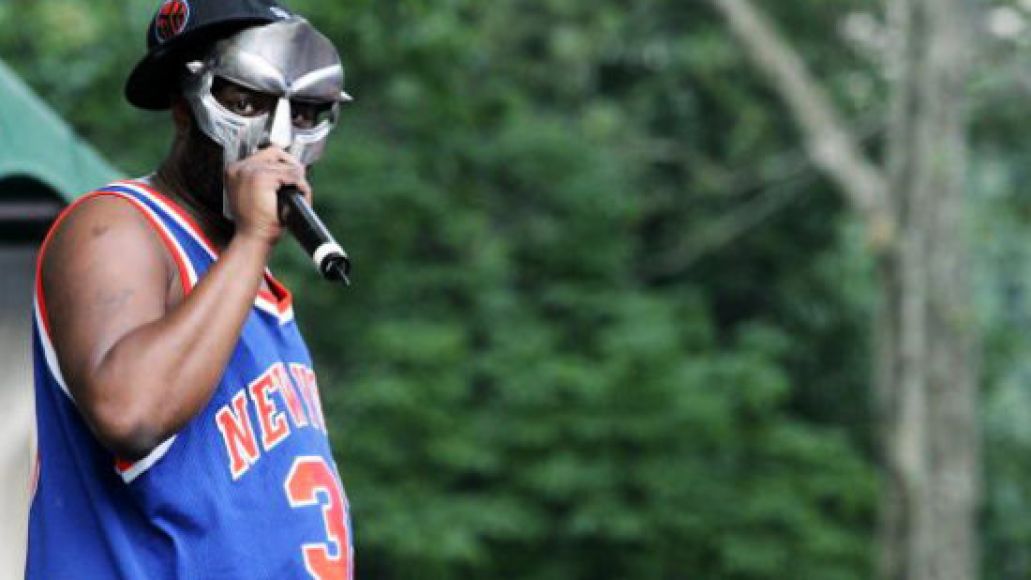 Consider some of the following information when debating on whether or not the statement above is true. MF Doom was originally Zev Love X, a member of the underground sensation K.M.D. (Kausing Much Damage). While K.M.D. vanished into obscurity before they had the chance to ever break through, they made two amazing albums. Alongside Doom in this group was his brother, DJ Subroc, along with frequent appearances from Rodan and Onyx. The albums Mr. Hood and Black Bastards hold more weight now than ever imaginable. Black Bastards is easily one of my favorite hip-hop records ever, containing classic Doom tracks like “What a Niggy Know”, “Smoking that Shit”, and “Constipated Monkey”. MF Doom was still a skinny, little dude with a voice that sounded more like Dres of Black Sheep, rather than the gruff voice we are used to now.

So, what happened? K.M.D. had so much potential with their wit and production, but fate intervened too soon. Unfortunately, DJ Subroc aka Dingilizwe Dumile, was hit by a car in 1993, bringing K.M.D. to an end. MF Doom took to a life of anonymity, wandering the streets of Manhattan, just trying to live one day at a time. In 1997, he began rapping again, and his rhymes were fiercer than ever. He was now brandishing a metal mask, creating his first, personal masterpiece Operation: Doomsday, and collaborating with a group called the Monsta Island Czars on their album Escape from Monsta Island!. Operation: Doomsday went on to become an underground classic, with its raw-style production, rough flows, and spectacular comic book imagery; it set a whole new precedent for modern hip-hop. Nobody, and I mean nobody, was making hip-hop records like this in 1999.

For the next decade, MF Doom would make a collection of several records in a very short amount of time. He made many solo records, under numerous different aliases. Under the name King Geedorah, he made one of his finest records, Take Me to Your Leader. Tracks like “Fazers”, “Fast Lane”, and “No Snakes Alive”, are as evil and diabolical as the real King Geedorah. He also made records under the moniker Viktor Vaughn from 2003-2004, while also doing MF Doom records as well such as MM Food, an album that is entirely about eating, and Born Like This. Not to mention his multiple instrumental records, known as Special Herbs, where he named himself Metal Fingers. Here, one can see why Doom’s knowledge of sampling and production is impeccable.

On top of his solo work, MF Doom has collaborated with some of the finest producers and musicians of the modern age. In 2004, MF Doom made an album sampling multiple moments from Cartoon Network’s Adult Swim with Danger Mouse. The project was entitled Danger Doom, and the album was The Mouse and the Mask, which featured appearances from Ghostface and Talib Kweli, as well as a Tarantino-sampled beat on “Old School” (I wanted this to be a beat as soon as I saw Kill Bill Vol. 1). Then, came his collaboration with Madlib, which was my personal favorite, Madvillian. The beats on this record were flawless, with Madlib and Doom’s bizarre sense of jazz, sampling, instrumentation and beneath-the-streets rhyming. Quasimoto appeared on a couple tracks, most notably, “America’s Most Blunted”, but the album contains so many gems, that it could easily be known as a hip-hop classic.

MF Doom has been everywhere in the hip-hop game. He continues to prosper so well because he has created his own real-life comic book super villain, and that’s what hip-hop is all about, maintaining the personality you project within your songs. MF Doom has no problem doing that, because he knows exactly who he is. In the recent season of Breaking Bad, character Jesse Pinkman talks about the first step to living is to know exactly who you are and he says, “I know who I am. I’m the bad guy.” MF Doom knows exactly who he is; he’s the ultra-intelligent super villain to modern day rap, here to blow up the projects, and our minds simultaneously. This is why he’s doing better than Lil’ Wayne. This is why he’s the top MC of modern day rap. This is why MF Doom is a fucking icon.