“We want to see people shake their asses,” screams Alex Rose, keyboardist and backing vocals of Minus the Bear. There’s a reason he’s insisting on creating a dance party. He believes the band is going into a more “dance-like feel” direction. Though, given the overall performance of the night, this can be debated.

Lets start from square one, shall we? Young the Giant cracked open the night with its sun soaked, California rich sound, injecting pure, unadulterated “fun” that danced with tamed chaos. With both a tambourine and a maraca in hands, frontman Sameer Gadhia’s unstoppable energy brought him from one mic to the other. (Keep in mind that said mics were completely across the stage from one another.) The energy, however, was not driven solely through the frontman, a quality hard found, it pressed on throughout the entire ensemble — whether it be guitarist Eric Cannata’s loose limb dancing or bassist Payam Doostzadeh’s child-like hopping; altogether, the energy was present and exciting for the crowd. So, even before Minus the Bear hit the stage, people were definitely shaking their asses.

That was until Everest jumped on stage. As fantastic as their instrumentals were (and very well may be on their latest record On Approach), the group’s energy simply lacked where Young the Giant left it off. When the curtain unveiled this five piece, everyone metaphorically took a tumble down the hill. Regardless of the talent, it was more than apparent that the crowd longed for a momentary cease fire of the noise they performed. Let’s just say, it’s never a good sign when Men at Work’s “Down Under” (played during the intermission shortly after) receives more dances and cheers than your own act. Ouch. 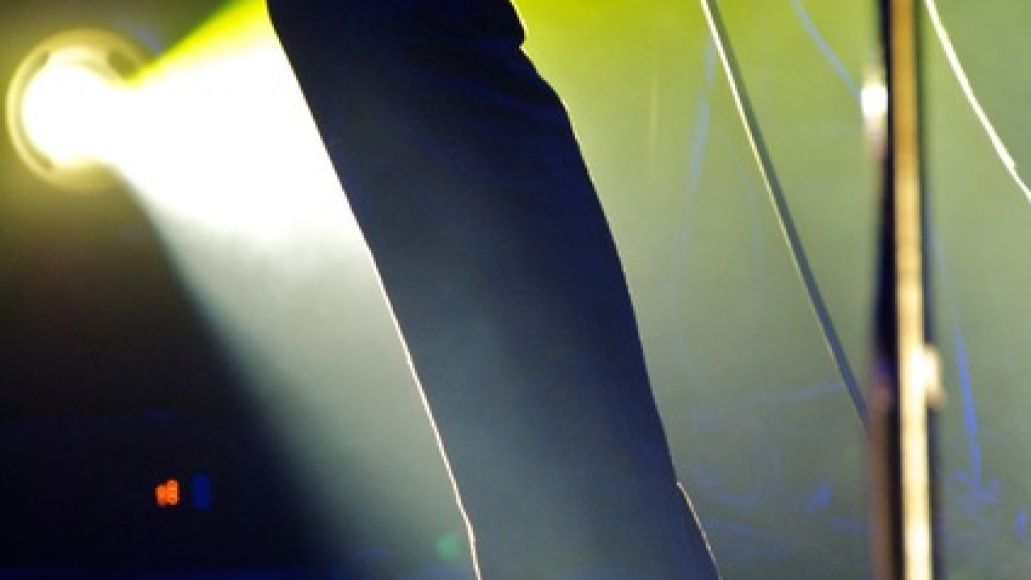 Finally, after the night’s stale middle, Minus the Bear hit the stage with an eerie, cool sound that kept the crowd in question. Throwing a curve ball, the band drummed up “Drilling”, off their sophomore release Menos el Oso. This is how most of the show continued on… very off-guard material. For one, we had a band too sloshed for their own good, making the overall set a bit sloppy. So sloppy to the point that frontman Jake Snider couldn’t even put his drink down during “Dayglow Vista Rd.”, let alone keep up with the majority of the set’s lyrics. Drummer Erin Tate held the beat steady the entire set; however, the rest of the band had a bit of trouble. With Dave Knudson having to tool around with his effects pedals every two songs, coupled with Snider schlepping his own weight about the stage uninterested, bassist Cory Murchy and Alex Rose joined Tate in trying to keep the bunch together. But a couple of songs in, you could just tell something wasn’t there.

Not if we’re to use previous performances as an example. What happened to the brutal energy? Where was the band that kept things tight yet frantic? Many were counting on that energy to bring back the show after the somewhat dissatisfying experience with Everest. Yet even with such an entertaining (and jaw dropping) setlist, which highlighted the band’s now lengthy discography, the group’s presentation kept things at average.

After the all-time fan favorite “Absinthe Party at the Fly Honey Warehouse” rounded out the lukewarm show, fans were free to let their thoughts run wild. Comments sifted through the air, ranging from “What a killer fuckin’ show!” to “Oh well, they aren’t the greatest in concert.” One can argue that the show wasn’t a complete disaster, but it could have been better. In sum, dancing was half-assed.


Minus the Bear setlist:
Drilling
Throwin’ Shapes
Knights
My Time
Summer Angel
When We Escape
Secret Country
This Ain’t a Surfin’ Movie
Excuses
Double Vision Quest
Fine + 2 Points
Hold Me Down
Hey! Is That a Ninja Up There?
Pachuca Sunrise
Dayglow Vista Rd.
The Fix
Into the Mirror
Absinthe Party at the Fly Honey Warehouse
——

Minus the Bear chills too hard in sunny SoFla (5/11)