Perhaps the universe shifted a bit on its axis as The Apples in Stereo traveled backwards in time to be with an appreciative crowd at Chicago’s Lincoln Hall the evening of Friday, April 30th. Dressed in white jackets, sparkly silver pants, and dark black sunglasses (“uniforms impervious to time travel”), the Apples took the stage around midnight to what seemed to be a full house.

All the space-age fun was in honor of the Apples’ new record, Travellers in Space and Time, which came out this past week “in your time frame,” according to lead man Robert Schneider, who danced around the stage in a long white doctor’s coat and dark glasses above his long beard. The album plays with rhythm, timing, and robot sound effects, and their stage show reflected this. The band was frequently swathed in smoke from a liberally employed smoke machine, giving the impression that the seven men might actually be from outer space.

The Apples played about a half-dozen songs from the new album, leaning back on some old crowd favorites, as well. Particularly well-received was new single “Dance Floor”, which the crowd took at its word. The stage lights reflecting off all the smoke and the house disco ball gave the whole set an odd, mad-scientist effect. “Here’s another song about phenomenon,” Schneider chuckled as he kicked off one song.

But the best part of the set was the simple pleasure of seeing the band live. Travellers in Space and Time is a solid album but seems to lose a bit in translation; it’s enjoyable but a bit repetitive. What the album lacks, however, the band makes up for in spades live. This was never more apparent than when they burst into “No One In the World”, my least favorite song on the new album. As I began to dance to the grooving guitar line, I recognized the melody and cringed a little, but my dancing continued on almost involuntarily. The repetitive nature of the song is reduced or improved or both by the live experience, the jangling keyboards, dazzling lights, and deep bass groove. 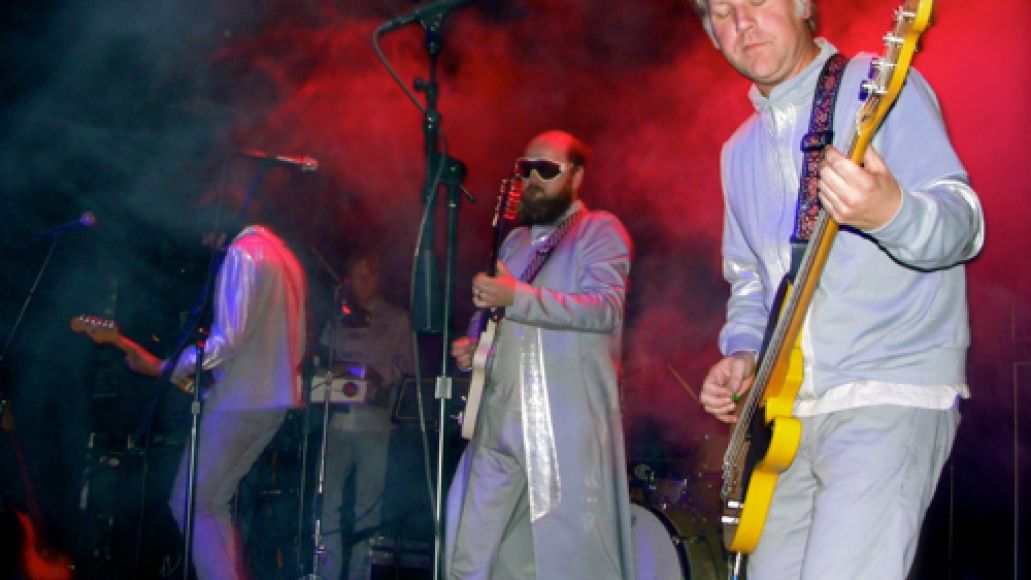 The Apples came out for a two-song encore that ended with the members of opening bands Laminated Cat and the Generationals joining them onstage for the final song. With the seven members of the Apples, plus the full line up of the other two bands, this put about 15 people on the tiny stage, crowding around microphones in a familial way and dancing between the equipment. Maracas, tambourines, and other small instruments were passed out to anyone with empty hands, resulting in a mish-mash of costumes and percussive sounds that had the effect of a musical flash-mob. The bands seemed to genuinely enjoy playing together, and the group aesthetic made the whole thing rock pretty hard. The bass rang deep, and the guitars echoed up into the rafters. After raucous applause from the audience, Schneider was heard to direct members to “weave on out” through the back, as the tiny stage left little room for escape.

It seemed the set was over, but then Schneider grabbed his guitar again and played one last song all alone on a darkened stage. It would’ve been more fitting to end on the fun of the group song, but then, if the Apples were worried about what other people thought, they wouldn’t have time traveled all the way to last night to see us. Catching the Apples on their outer-space sojourn is not a bad way at all to spend a Friday night.