“I hate to state the obvious but it all started here,” frontman Josh Homme says, igniting a sold-out crowd at Chicago’s stuffy Aragon Ballroom. “This is our last show in America, here with you. We’re all dead-end friends together.”

Simple, precise, and to the point — Homme knows how to strike his fan’s hearts with as little as possible. Chugging away at a cigarette and noodling around the lower fret of his guitar, he struts about the stage, wearing his ass on his sleeve and a chip on his boots. His soft croon misleading, there is no mystery to Josh Homme. He’s modern rock’s average Joe, and he gets by just fine with that mentality.

So, what’s the fuss about Them Crooked Vultures?

Oh, but what isn’t there to fuss about? Homme must find solace in knowing he has quite the backing band these days. Whereas he usually assembles a motley crew for the road with Queens of the Stone Age, here he’s working with, well, just about the best musicians around. You don’t find a better drummer than Dave Grohl and John Paul Jones is…  yeah, you get the point. Some can argue that such names speak for themselves, maybe even take precedence over the music. It’s not something fans will agree with, but at the end of the day, it’s a solid argument — especially when you witness a show.

At the end of the set’s opener, “No One Loves Me & Neither Do I”, Grohl douses himself with water, shaking like a dog after a cool bath. He’s having the time of his life, and why shouldn’t he? He’s working with a close friend (Homme) and sharing a rhythm section with a legend from a band he’s idolized since his youth (Led Zeppelin). What more could he want? This band, this tour, and this show represents a mighty accolade in his career. He shows it, too. Seeing Grohl smiling and acting charismatic should surprise nobody at this point; however, with this trio, he showcases a different side to his character. He’s more youthful, he’s more focused, and he’s, above all, genuinely bringing the heat. He melts down the house as a frontman, but behind the kit, he makes it personal. That’s something you’ll never see at a Foo Fighters concert.

You’ll also never see John Paul Jones in such wicked form. If there’s one wild card here — let’s face it, we’ve seen what Homme and Grohl can do together — it’s the former Zeppelin hero. With Homme’s limited vocal range, there’s a heavy dependence on instrumentation, which is exactly what Jones provides. On stage, Jones’ warped-yet-funky bass notes on “Gunman” turn the tightly packed audience into a human wave. His musicianship carries over into other instruments, including the violin (“You Can’t Possibly Begin To Imagine”) and the piano (“Spinning in Daffodils”). Forget that he probably witnessed Robert Plant forcing groupies to fornicate with sea creatures, here’s a musician at heart, willing to push aside stage antics in lieu of precise orchestration. For that, he wins the crowd over… in Chicago, L.A., New York, anywhere. 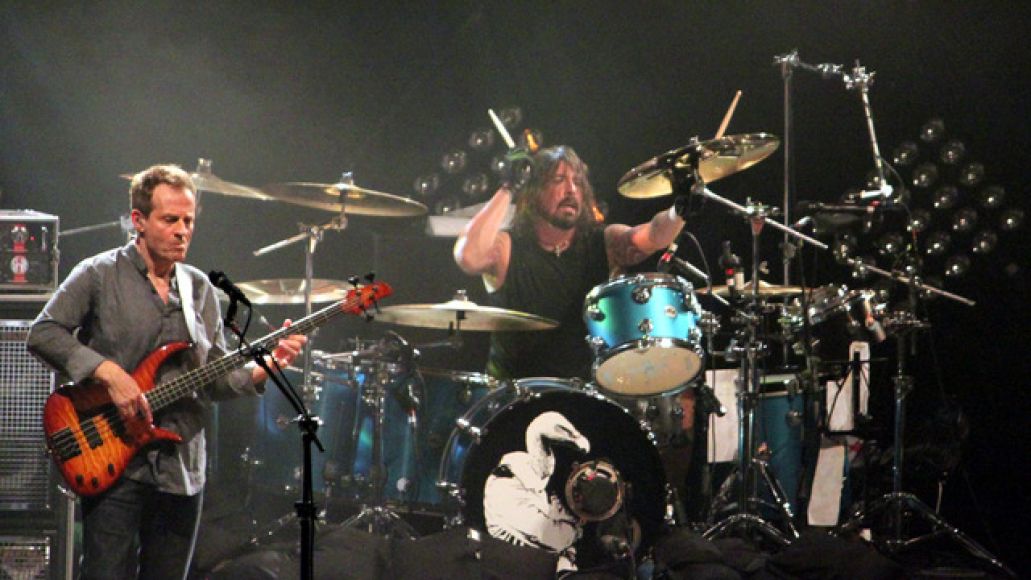 “What we love about music are special moments,” Homme declares toward the end of the night. It’s a resounding statement, and one that defines the group entirely. At its core, no matter how superior these musicians may be, Them Crooked Vultures represent a supergroup, and it’s because of this that the Aragon Ballroom sold-out. It’s not the music. It’s an event that, to paraphrase Homme, amounts to a “special moment.”

Think about an NBA All-Star Game, where every year the league rounds up its top players for a series of games and challenges. What do you remember? What do you take away? Certainly not the game. Of course not. You remember Dwyane Wade winning MVP or Paul Pierce knocking out both Chauncey Billups and Channing Frye in the 3-point match. The same could be said for Them Crooked Vultures. Yeah, “New Fang” brings back memories of it first hitting the net last fall, and sure, “Mind Eraser, No Chaser” might swim in your head for a bit, but that’s not what you relish. It’s seeing Grohl beating the living shit out of his drumset during “Caligulove”, or Jones smiling and dusting off his seat before ravaging the piano, or Homme being Homme. And together, yeah, that’s worth the ticket right there. Just don’t expect to be whistling the songs for too long after.

And therein lies the group’s dilemma…

All photography by Heather Kaplan.

Setlist:
No One Loves Me & Neither Do I
Gunman
Scumbag Blues
Dead End Friends
Elephants
Highway One
New Fang
Bandoliers
Interlude With Ludes
Mind Eraser, No Chaser
Caligulove
You Can’t Possibly Begin To Imagine
Spinning In Daffodils
Reptiles
Warsaw or The First Breath You Take After You Give Up
——

Them Crooked Vultures migrate back to Chicago (5/18)