People love games. That’s why Microsoft’s marketing push for its new social networking phone, the KIN, comes off as fresh and exciting. Throughout the country, the company “surprises” its followers online with secret, intimate gigs, where the time and place are never fully disclosed until hours before the event. Last week saw New York enjoy a dance party with Passion Pit, this past weekend, Chicago experienced the gloom and doom garage rock of The Dead Weather.

Around four o’ clock on Saturday, hundreds — actually, maybe a good thousand or two — stormed outside Carmichael’s Steakhouse, located in the industrial wasteland that is the west loop. Those lucky enough to snake themselves into the 500-capacity warehouse, snug tight behind the restaurant’s exterior, enjoyed one hell of a performance by Third Man Record’s hottest act.

It didn’t take the music to get this crowd going, either. Once Alison Mosshart latched onto the stage’s center mic, the crowd erupted in a deafening roar; in other words, girls saluted their new idol, while guys professed their love again and again. Once people caught glimpse of the band’s acclaimed drummer (you know, Jack White), everyone pretty much went deaf. That didn’t stop them from hearing guitarist Dean Fertita, however, who kicked off the show with the dreary ‘n’ bluesy “60 Feet Tall”.

In the first 15 minutes, Mosshart released some real primal energy, tiptoeing along the lip of the stage, climbing atop monitors, and even dropping her mic into the photo pit. She snarled, she whipped her hair around, and she tossed and turned wildly. She couldn’t sit still. During “Hang You from the Heavens”, her eyes preyed upon the crowd, seductively calling forth even the farthest fan. Her spiraling, pitch black hair, a defining characteristic that umbrellas her lanky frame, kept her features hidden throughout most of the set, though when she yelped or screamed, you couldn’t miss her sharp, pearly whites.

White kept himself busy at the drums, rattling away and clicking with every fill, though when he slid on his guitar, all eyes were naturally on him. He led the band through a couple of tunes, including a solid cover of Them’s “You Just Can’t Win”, and although he sports the most modest demeanor for a guy of his caliber (“Hi, I’m Jack White…”), he still sets the crowd on fire. Coupled with Mosshart, things actually feel sort of dangerous. The two bounce off each other like two psychotic lovers (think of Malory and Mickey in 1994’s Natural Born Killers). 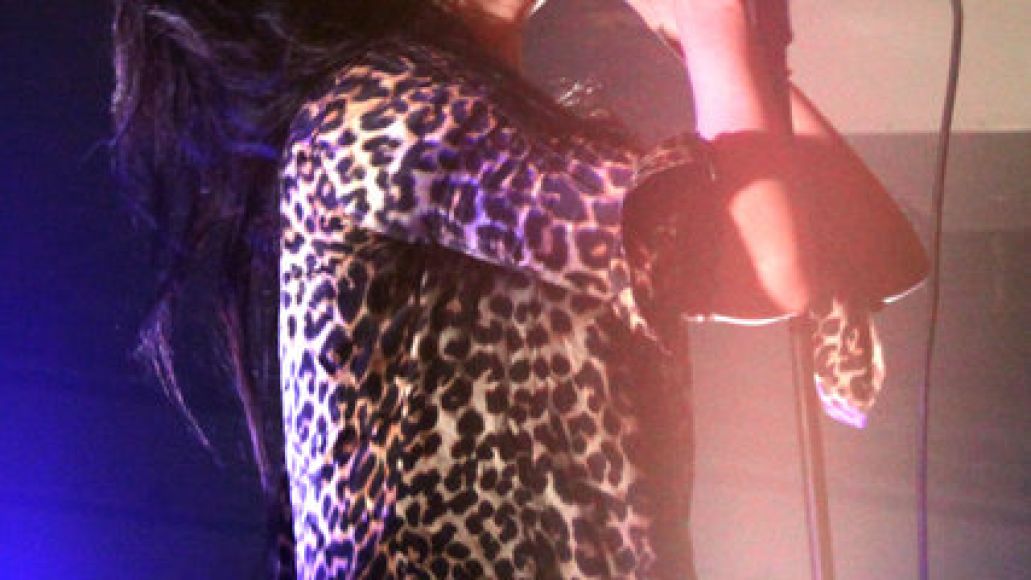 But that’s what makes The Dead Weather so special — and so incredibly opportunistic for Microsoft’s close pocketed event. White and Mosshart create an energy that feels so genuine, so real, and so exciting. They’ve mastered this energy live while touring behind Horehound, and now they’ve perfected on material from Sea of Cowards. The two bounce about in “Hustle and Cuss”, butt heads in “I’m Mad”, and rip each others’ throats out in the blistering rocker, “The Difference Between Us”. It’s as if they decided to turn up the heat on what was already a fiery storm. This only brings the set to new heights, including past material.

If anyone’s been following them this last year, then they’re familiar with the eye-fucking extravaganza that is “Will There Be Enough Water?”, the raging duet off of Horehound that typically closes out the group’s initial set. With bassist Jack Lawrence at the drum kit, White and Mosshart share the spotlight, staring each other down in what should just be considered musical theatre, or maybe musical foreplay. In an intimate setting like a warehouse with only 500 fans, it sort of comes off as oddly voyeuristic, sort of like staring at a drunk couple making out on the train.

Some might say that’s where the set peaked, even after a rousing three song encore. But this band brands itself on being “bad ass” and “dangerous” and no song makes that more clear than “Treat Me Like Your Mother”, the ballsy garage rocker that lets Mosshart and White vocally surf on a modern groove. Around the mock up venue, attendees bobbed their heads and screamed along, eventually cajoling the band as the distortion finally subsided. Before exiting stage left, White yanked the drum mic up and exclaimed with optimism, “Thank you so much for seeing us and buying our records.”

Truth be told, these days they’re probably more likely to buy a KIN.