When it comes to superheroes, none are as long-suffering as Batman. Apparently having his parents murdered in front of him as a child was not enough, so the world continually unleashes some new tragedy for him to endure. While not as devastating a defeat as a teenage sidekick murdered by a clown, paralysis courtesy of a steroid addict in a lucha libre mask, or two Joel Schumacher film adaptations, one often overlooked source of humiliation is “Batdance”.

With the cross-media success of Purple Rain, pairing Prince with what everyone predicted to be the biggest movie of the year seemed to be a wise business choice. And it was, because Prince’s soundtrack, while an awkward match with Burton’s gothic interpretation of the Caped Crusader, was a multi-platinum hit. The biggest single from the soundtrack was “Batdance”, which spawned one of the final hilariously ridiculous videos of the eighties.

“Batdance” begins with a television shaped like the Batman symbol, but nothing is on but static, so the camera pans over some Batmen brooding in their purple, sparkly capes until revealing none other than Prince himself hunched over a keyboard with thunder and lightning in the background. Everything about the video can be found in these first twenty seconds: vaguely gothic imagery, funk-ified Batmen, and a general sense of incomprehensible eighties insanity. Soon the bat-shaped screen comes to life and Prince as the Joker appears and wags his tongue, while the non-costumed Prince watches and in response, turns on the music.

Sometimes the merging of film and music is taken too far, and “Batdance” one of the worst offenders. After a sound bite of Jack Nicholson’s Joker, The Batmen awake as five Jokers come marching in to dance on the smoky floor. Prince-as-Joker rises from the smoke to reveal that he is actually a Batman/Joker hybrid. With his left half dressed and painted Joker-style and the right half as Batman without the mask, Prince’s look is reminiscent of Two-Face. Considering that Two-Face would later be portrayed as merely a lesser Joker in Batman Forever, this appearance is somewhat prophetic. Regardless, Prince not only makes this hybrid look work, he makes it cool.  Unfortunately, this character known as Gemini is where the coolness ends in “Batdance”.

As bizarre as it is seeing The Purple One dressed as Gemini and yelling “get the funk up!”, “Batdance” still has plenty of layers of weirdness to reveal. Some of the smoke clears as the Batmen and Jokers finally share a stage for a superhero versus supervillain dance-off. So who wins this battle of dated silliness? The Batmen have the unfair advantage of the panache that comes with capes, but merely leaning forward while waving a cape in and out is a surefire way to get served. Any victory for either troupe is deemed irrelevant, however, since the two forces join and dance together, with Prince’s hybrid leading. 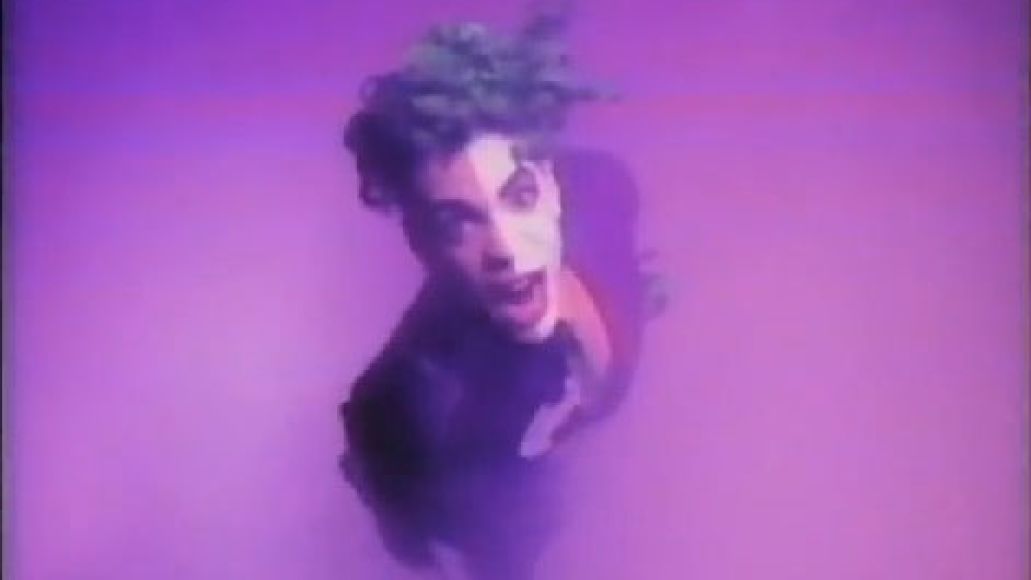 Alas, for all its flash and choreography, the Batdance proves less memorable than Adam West’s Batusi, just with all of its cheese and none of the charm. As if all the dancing and absurdity weren’t enough, “Batdance” actually samples the familiar “Batman!” from the theme song to the 60’s television series. Weren’t these movies supposed to be an official distancing from that? Another Jack Nicholson sound bite brings the momentum to a pause and five clones of Kim Basinger’s Vicki Vale enter the party. In a welcome reference to The Dark Knight Returns, one is briefly seen wearing a shirt that reads “All THIS AND BRAINS TOO”, but the novelty is interrupted by another distracting sound bite from the film, this time of Michael Keaton.

Gemini sings “I wanna bust that body” to the Vicki Vales in the way only Prince can, and one lifts her dress to reveal an unlikely Batman tattoo on her upper thigh, and another is shown to be sporting a Joker tattoo on her back. Perhaps one of the other Vicki Vales has an Alfred tattoo?  With Batmen, Jokers, Vicki Vales, and a double dose of Prince in the mix, appearances from Alfreds and  Bob the Goons seems inevitable, but surprisingly never materialize. The Batmen prove to be heroes only in costume and not in practice as they pause in a cowered position rather than attempt to disarm the Jokers as they point guns at the Vales. Once the Jokers lift their guns and fire into the air rather than at any Vicki, the cowardly Batmen unfreeze and continue their dance. After another minute of singing, dancing, sound clips, and the appearance of a smoking electric chair that had suddenly appeared because the lyrics mentioned one, Gemini detonates the chair. As Nicholson’s laughter plays in the background, the non-costumed Prince says “stop”, mercifully bringing the video to a close.

Unfortunate videos happen to good artists all the time, even the best ones, and Prince is no exception.  Rather than contributing to the Batman mythos or the legend of Prince, “Batdance” is a bizarre and embarrassing reminder of what was wrong with so many of the music videos of the eighties.