My mom used to comment on January 1st as always being the clearest day of the year in Los Angeles, the day everybody in America turns on their TV in the morning to watch giant corsages roll down the streets of Pasadena. She argued that this led to the masses of people moving to Southern California, and the horrific traffic, murky smog, and other hazards that are associated with the region. Well, the second clearest day of the year must be June 19th, which just so happened to be Make Music Pasadena this year. The two New York bands that headed a bill that included more than 70 performers both commented on the weather early in their set (Matt of Matt & Kim even said he would move here if Kim wasn’t so attached to Brooklyn) and though I rarely make it out to that region of Los Angeles (yet this is the second time in less than a week), the vibrant foothills loomed over us, rather than just the pale outlines they usually exist as. Yes, it was a good day for a free music festival.

The toughest thing about it, and this is my only real knock on it, was finding out where stuff was. I hadn’t been to Old Town Pasadena (imagine downtown in any college town, but without the students) since my teens, so just finding the general vicinity was a chore, but once arriving, there was a surprising lack of signs and organization. That gave the feel of a very local event that spread by word of mouth and not visible promotion, when the intention was to honor World Music Weekend. But still, we did find it and I only owe $42 in parking tickets, which I may be able to deduct from my taxes. But, I had done research and mapping ahead of time  and still don’t think I checked in properly for my photo pass. And I tend to think the turnout would be better (not to say that it was bad at all, but there was clear room to grow) from people who couldn’t walk there if a few banners were made and a few more volunteers passed out programs. But, it was free for Christ’s sake. For a festival that is dependent on donations, volunteers, sponsors, and local art, the event went swimmingly. 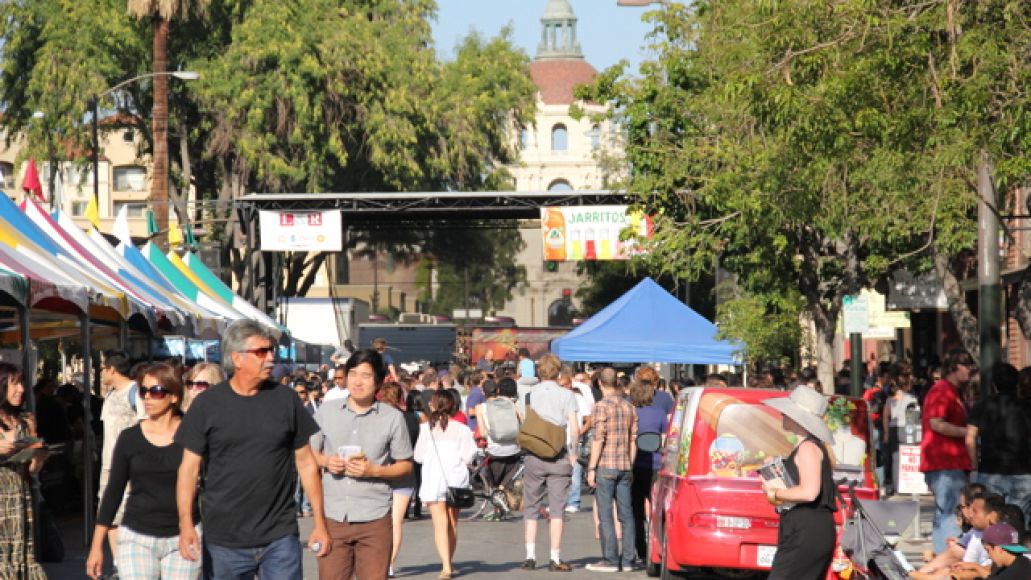 This had to do with the caliber of artists that played this modest town function. Past lineups included Mirah and The Raveonettes, but the three groups topping the main stage were all hitting on all cylinders and are at the top of their respective buzz or popularity. But, while I took in Warpaint, The Antlers and Matt & Kim with the bulk of the audience, you could walk through Crate & Barrel while an avant garde DJ spins on the sidewalk in front. Or the band that sounded like Trapt (not my comparison, but I trust that is what Trapt sounds like) that screamed in an alley facing patio diners at an Italian cafe. The idea was to fill as much of the space as possible with musicians, both scheduled and not, creating a bohemian vibe. I was personally disappointed that I didn’t get to check out local group Batwings Catwings, whom a friend recently sent me song of called “Future Beats”, and it is pretty damn good. But my commitment was to the heavy(ish) hitters of the indie world that graced us with their presence. 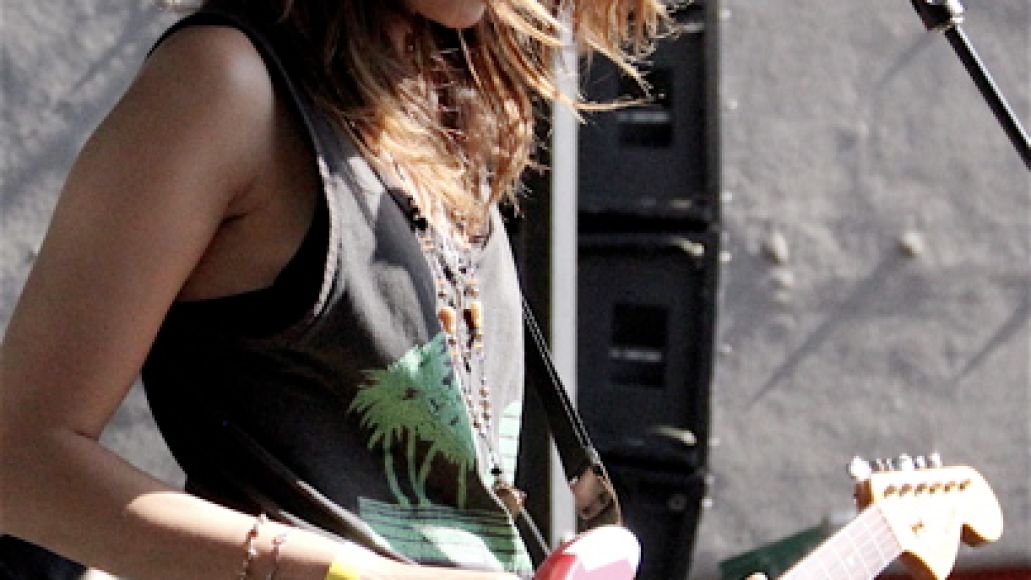 Warpaint is an all-girl band (which I did not know) from L.A. that is currently recording their first full-length album. So why do people keep talking about them? Well, super-babe/actress Shannyn Sossamon used to be in it and her sister still is, so they are kind of a Hollywood vanity project, except not vain. But yeah, I have actually heard so much about them of late, especially considering that many in our comments section are talking about their Bonnaroo performance as one of the tops for the weekend, that I didn’t want to hear what they sounded like before the show so I could arrive and find out if they were really worth the hype.

They were worth the hype.

Although all were quality performances from the three bands, Warpaint is captivating in a weird way. The music is groovy and melodic, with vocals that even seem haunting, and the band feels their music in a way that is rare. I think I was surprised at how rare it is, that a rock band felt compelled to move and interact consistently with each other, definitely not having reached the phoned-in stage. It probably helps the attention span of the audience that the band is made up of perfect looking women, but they don’t play that card even though it is kind of played by psychology without their consent. Still, the girls were without visible makeup, dressed stylishly but not up and seemed comfortable sweating on stage. But it was far and away the music and not the looks that captured everyone’s attention. There were instrument switches, with impressive yet not masturbatory displays of chops and the girls took turns on lead vocal duties. When I think of the word “primal”, I think of Tool and The Doors. Warpaint might fit this word better than either of those bands, with the music’s effect becoming a lot larger that its individual elements, oozing sexuality, violence and fun at the same time. So yeah, I liked them.

By the time Warpaint finished, the main stage was nearly a half-hour behind schedule. The effects seemed to be placed on The Antlers set, with the band only playing five numbers. This also might have something to do with American Airlines losing some of the band’s equipment, prompting Facebook requests for loaners and causing singer Peter Silberman to vent his frustrations to a generally apathetic crowd. But, no one could tell there was as problem by how they sounded, playing a professional if slightly withdrawn mini-set, that began like their rightfully acclaimed album (“Kettering”,”Sylvia”), then deviated with closing number/best-known track “Two”. Silberman had the distinction of raddest looking performer because the sun reflected of his sunglasses, evoking images of demon possession or the like. 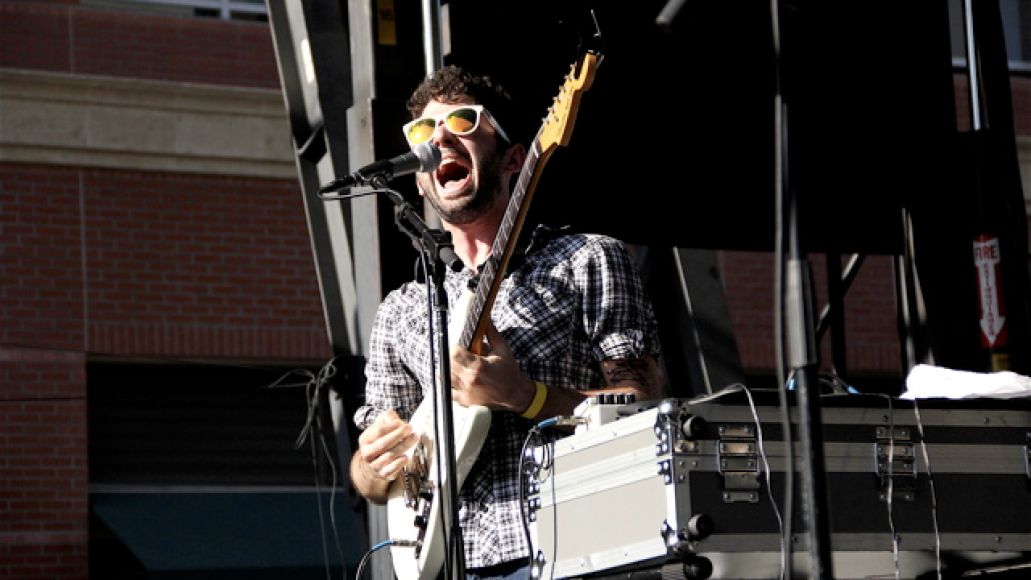 Finally, Matt & Kim played the Matt & Kim set, being very much Matt & Kim throughout. They have grown in fans so much in the last year, that when they appeared rather abruptly, the front of the crowd exploded and pushed down the metal barrier (seriously, was within a couple feet of hurting me). The security guard up front had just finished his anecdote about how this show compared to Ozzy and Korn, basically night and day, when the teenage riot broke out. But yeah, no one seemed to get hurt in the brief chaos and the bouncers acted quickly and efficiently. I’m not sure who was paid and who volunteered, but the staff – all across the board – made the day feel safe and festive, showing that my aforementioned festival issues were isolated to bringing people in, not once they actually got there.

Security did drop the ball at keeping the bands in line, but that is kind of what Matt & Kim are about. As I was saying, with the crowd going nuts, Matt & Kim delivered what was promised: a very un-hip, energetic, keyboard driven and melodic though chaotic and scream-heavy brand of dance-punk that you can neither dance to nor represent as a punk. Lots of girls like them. I hear they have a pretty standard set, including “Daylight” at the end and their version of Gob’s theme-song, Europe’s “The Final Countdown”. Not to mention, can’t miss party starter “Better Off Alone”. If it were ironic, I’d probably get it more but enjoy it less, but Matt & Kim maintain tolerability through their sincerity. I believe they are really this happy and eager to please. And while it might not be music worth listening to, it’s always worth watching in admiration (or horror) on a sunny afternoon. For free. 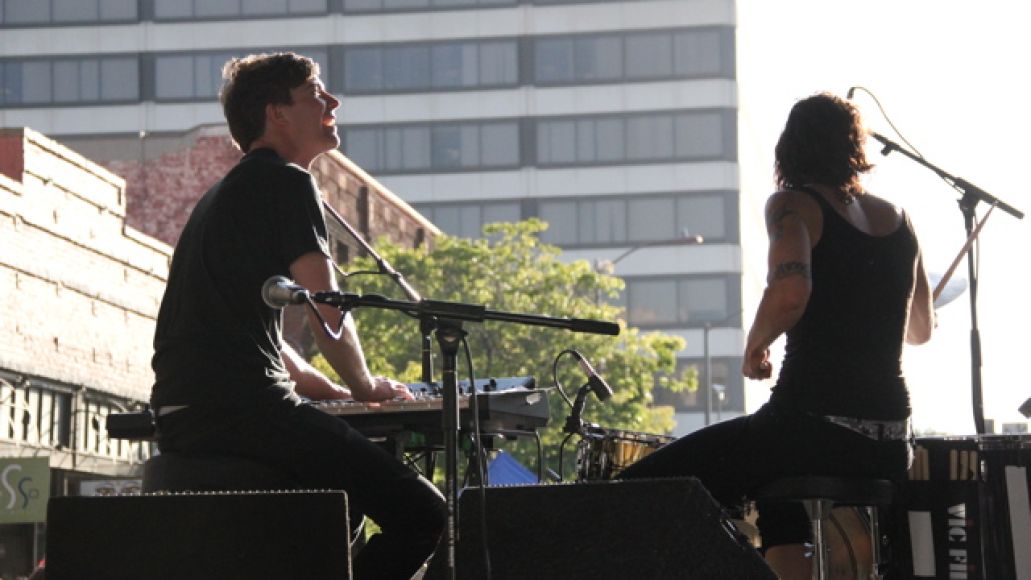 But Matt & Kim do fit well with the message of the festival, which desires everyone to create no matter the method or message. There was a chalk festival going on at the same time that focused on chalk street art, while the headliners for the festival are just a duo with short names who are making big noise in the industry. Make Music Pasadena isn’t a request, it’s an order or a call to arms that, surly, the Trapt sound-a-likes answered willingly and the 10 people that stood and watched them validated. Because,  like Matt of Matt & Kim demonstrated as he left the separation of the stage to sprint down the foot path while hi-fiving strangers, art brings people together and connects them, willingly or unwillingly.

I personally hope my connection is with Warpaint. I’m just sayin…
——

Coming Together at Make Music Pasadena