Festival season: the yearly ritual of hipsters and fan pilgrimages alike, the stuff road trips and one-off performances were meant for, the stuff of legends (Woodstock being the prime example). We at CoS bring you up to speed on everything festival-oriented, and this time “nothin’ says lovin'” like a Rock ‘Em Sock ‘Em headbanger with his ink-checkered, rock chick by his side (most likely flashing her breasts).

The third-annual Mayhem Festival anticipates a major turnout in its junior year, stacking a main stage with nu-metal (KoRn), horror (Rob Zombie), and New Wave American (Lamb Of God), among others. After brushes with modern rock, thrash, and hardcore the past two go-rounds, it seems we must now deal out a Survival Guide. The unfortunate truth is that while more established festivals like Coachella or Lolla are permanently fixed locales in the scenery of California and Illinois respectively, Mayhem (and at one point, Ozzfest) tours the nation, and therefore, we must fit you with a universally applicable rock and metal concert guide…for your protection, for your pleasure, like any good Trojan-packing dominatrix (er, survival manual).

What’s this? You’re wearing the shirt of the band you’re going to see? Don’t be that guy.” ~ Jeremy Piven

Everywhere you look at a rock show there are countless vendors selling merchandise geared to its relative audience: funny quote shirts, chain wallets, and of course, band shirts. For avoiding the douche reference, DO NOT wear the shirt that corresponds with the band you’re seeing, whether you brought it in from an ages-old prior performance or you bought it in-house at the current gig. To support your favorite act, I encourage you to purchase a band shirt or some other piece of logo-stamped memorabilia — but DO NOT sneak into a nasty public lavatory in front of countless broken bladders to rock your new swag like some raging fanboy; it is tantamount to premature ejaculation. No one likes an overeager freshman! 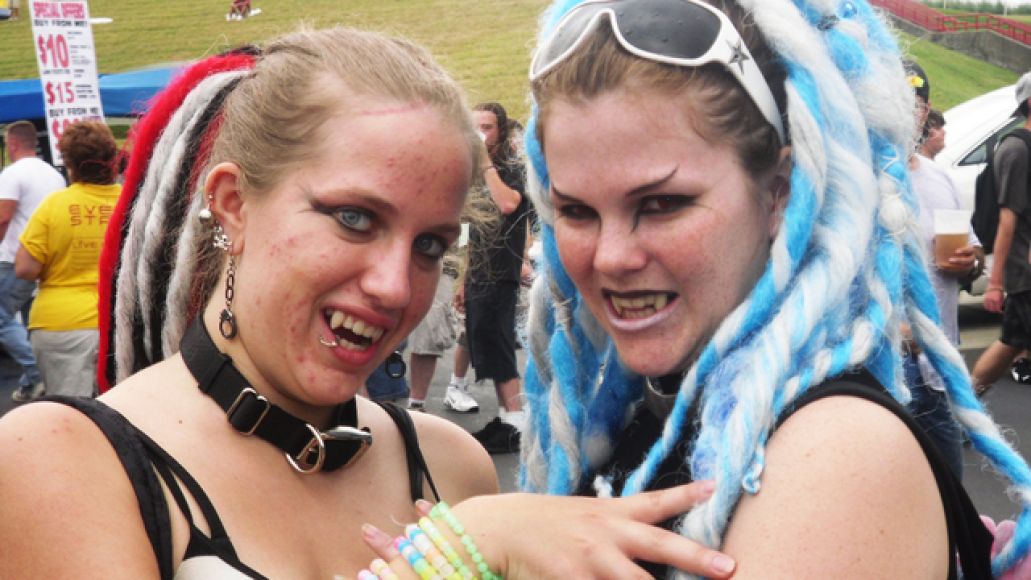 – Wear comfortable shoes/boots with cushioned socks for the constant trudging around in search of refreshments and hot metal girls (stay away from the Rocky Horror prosti-tots, people); DO NOT overdo the black clothing…festival season is usually a summer thing, and unless you’re a VIP, the water ain’t free, man.

– If you wear a band shirt, make it a related act not on said tour, and for you moshers, I recommend something very worn that shows your battle scars (girls think sexy, no?); most venues nowadays prohibit the wearing of heavy metal chains, spikes, and jagged jewelry for safety reasons, so if you want to keep your pentacle-charmed steel knuckles or studded Slipknot belts, leave ’em at home.

– Popular choices for garb at metal shows also include costumed appearances, so as long as you follow the previously stated suggestions, I highly encourage this creative outlet (you never know what rock mag might spot you for a front page feature — bragging rights, fuckers!). If you are rocking shades or glasses, get contacts or find someone to hold them for you when removing; DO NOT stick them in your pocket for moshes because you WILL most likely destroy them.

The announcement from your devoted frontman on stage summons a “wall of death”. What do you do? By now, this has become a staple at some outdoor metal concerts (venue permitted or not). A crowd is parted like a satanic Red Sea, two factions doomed to do battle on the dirty ground, and suddenly the band begins a song with some type of introductory countdown. The pressure builds, sweaty fucks with tanks and buzz cuts stand side-by-side with teens on potent testosterone…3, 2, 1, blast off! Both crowds lunge headlong into one another like a scene from 300 – you shout “SPARTA!” and in one fell swoop the entire audience is a single mass of fists, scars, and shattered hash pipes (Spartan battle cry optional). 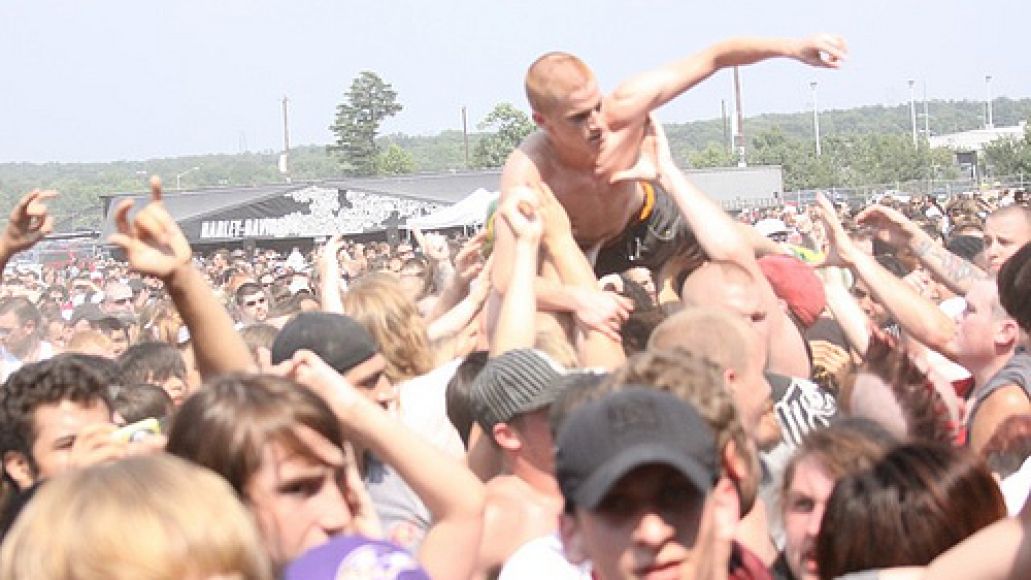 Welcome to a mosh pit!  Here are some tips for you noobs. (NOTE: Many venues discourage moshing due to its inherently violent image — follow some etiquette rules down below, and we might be able to salvage our right to rage)

– In initiating a mosh, DO NOT sit around waiting for the correct song – if it’s fast enough to head bang, it is generally hard enough to warrant a fight scene. (NOTE: Do not sit around for a proper moment to crowd surf either. Unless you’re obviously too “husky” to be surfing, be forward but tactful…and use caution when surfing over concrete flooring or stage barriers.)

– Pick your target mosh partner wisely: If you see someone who is itching to start a little action, is he the type of guy who wants to rage or simply a drunk brute with a bad attitude? Do you want your ass kicked, or do you just want to release some adrenaline? Remember that if you wind up in the infirmary, you’ll miss the final number (or even an extremity). DO NOT bring weapons, merch, or unopened water bottles into the mosh (security detail, be aware, but don’t be douches either — tact and safety).

– If someone you tap to get a scene going is not interested, leave him/her alone! If you are not interested in getting caught up, buy a ticket with comfy seating for the wuss that you are, or try and stay on the outer rim of your standing area and be instinctively cautious – because softies with a snitch habit or people with health conditions and no common sense tend to ruin it for the rest of us. Moshing in some venues is either contained in an actual “pit” close to the stage or spread out amongst the lawn’s cheap seats and/or standing General Audience room – if you are not one of the lucky few who want those experiences, feel free to try seating or VIP booth tickets (if available).

For starters, in some places it is illegal to leave your vehicle unlocked while it is unattended – the fact that this sort of law exists should precipitate a riot, because this is the end result of stupid people! DO NOT leave your car unlocked and vacant in a parking lot where hoards of young adults and all manner of thieving morons will seldom pass it by nonchalantly, and do not leave any valuables unsecured inside said vehicle or on your person if possible (this applies to everything from metal concerts to shopping malls to suburbia). 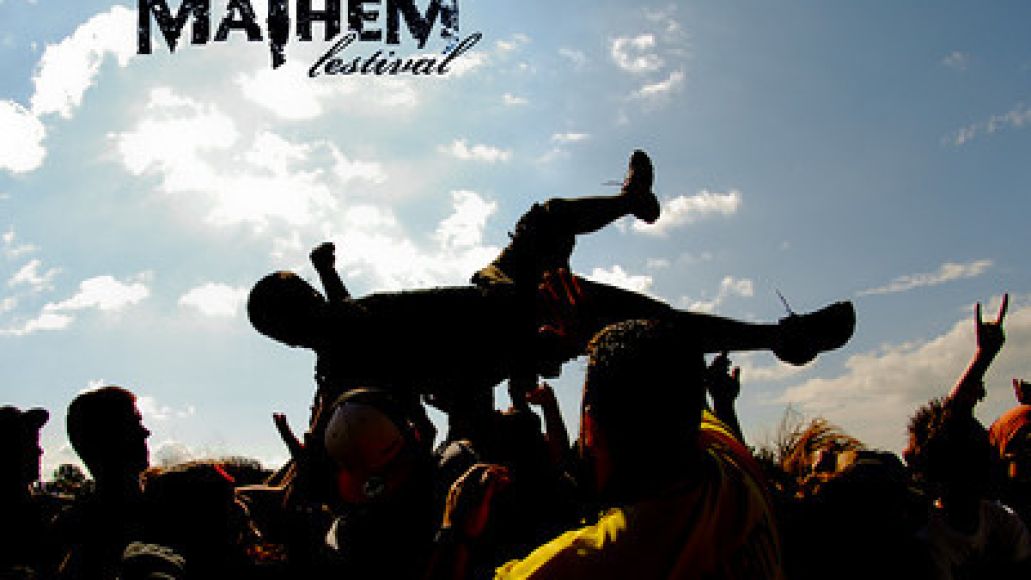 I highly encourage carpooling, and not because of the whole environmental impact and yadda yadda that Gore and co. have spouted for over a decade, but instead: Drunks may pony up more dough for gas money and hotels (assuming you drove across state lines like I do every year), the party is exponentially harder and more entertaining, and if by chance your carpooling requires making offers over Craigslist’s Rideshare postings, you could gather a harem along for company (wink wink, nudge nudge).

Different venues will allow or prohibit varying items from entering the premises, and since we cannot oblige every venue’s item listing, we HIGHLY RECOMMEND that you visit the website of your corresponding Mayhem Festival 2010 venue for said listings.  Some of the most common inclusions are:

Weapons, illegal drugs and paraphernalia, alcohol, unopened drink containers, food, coolers, heavy amounts of metal jewelry and chains, full-coverage masks, professional photography and/or audio and visual recording devices and equipment (See the venue’s information sites for notes on what the press is allowed to utilize). (NOTE: If you are carrying bags and satchels, remember that venue security will usually reserve the right to check said bags and satchels for all of the above — don’t be stupid; smoke at the hotel.)

– Make sure you have some cash on you for food, drinks, and merchandise (and a bag to hold it all) because while Mayhem does hand out a bunch of “proof that you were there,” most merchants take cash only; take photos, and lots of them, because it’s cheaper than 5 different $40 XXL shirts.

– Make friends with the press…you never know what we might be able to swing for you if you’re polite.

– Let yourself go and enjoy the show!  Let the bands know you appreciate their efforts so that they come back again to perform.

– Eat and drink heartily but do not overindulge on sodas and beers.  Getting drunk and partying is one thing, but exhaustion and dehydration are not laughing matters — binging is not cool on festival grounds, and certainly not healthy or affordable, so hit those water fountains, people.

– Make sure you get a show itinerary if available (most times they are), so you’ll know all about autograph signings and show times for bands on the tour.  Where I have been, the signings have occurred near the Jagermeister Stages at Ozzfest and Mayhem both years, or under the Rockstar Energy tent between band performances.

– For Mayhem, the entire event can last up to 11 p.m. or well past it depending on venue and crowd; DO NOT underestimate the traffic getting out (those comfortable shoes sound nice right about now, eh?). If you are in Virginia Beach as I have been, I suggest hitting up a 7-Eleven afterward for more “party favors” and a large Slurpee…fuck yeah.

– DO NOT antagonize or bully others if they are different, wearing merch for a band you don’t like, swearing more than you, have more or less chicks/dudes than you, or otherwise. Friendly banter and joking around or jerking your buddy’s chain because he wore a non-affiliated outfit or wound up with little spending cash is fine – just don’t go harassing the general public, you retarded neanderthal. We’re all family, and we all want to have a good raging time, so show your love, man, and rock the fuck out!