Ah, Minneapolis. The sacred gem at the top of the nation. The sister city to its saintly brother. Where the beer’s poured without question and the people smile whether you care to return the favor or not. It’s an ice block for most of the year, but in the summer, it’s America’s playground. Midwestern folk thaw out, throw on a Twins cap, and leave the house with the outdoors in mind. Parties spill over to the other side of the street, laughter ricochets off the Hennepin Avenue Bridge, all while the Mississippi River sings its sweet, sweet melodies.

So, it makes sense that The Hold Steady would return here on the Fourth of the July – especially since one of the guys calls it home.

And there isn’t a better place to hold a homecoming gig than at the legendary First Avenue, where some of the most influential artists in the past 30 years first hit the scene (Prince, HÃ¼sker DÃ¼, and The Replacements to name a few). Juxtaposed against a Gameworks and a Hard Rock Cafe these days, the landmark venue, in all its intimate-yet-spacious glory, remains a testament to the hard working ethic of Minneapolis artists, who, believe it or not, would all sell their offspring for a headlining gig there. Well, maybe.

Working off some good vibes, and most likely a couple of Grain Belt’s, frontman Craig Finn struck a Jesus Christ pose at the edge of the stage, as if to offer his devoted fanbase a great papa bear hug. Instead, he let the deafening applause build and build until he finally gave into “The Sweet Part of the City”, a slow yet fitting number to ease into the night’s steamy set, which was heavy on material off the band’s latest effort, Heaven is Whenever.

Not surprisingly, the new material played better live than on record. Both “Rock Problems” and “Hurricane J” held more gravitas, especially watching Finn’s interplay with the crowd, lead guitarist Tad Kubler, and bassist Galen Polivka. But as with any hometown gig, the oldies came off without a hitch and there were certainly some surprises. “Cattle and the Creeping Things” segued beautifully into “The Swish”, while “Banging Camp” amplified a new tune like “Soft in the Center”. What’s important to note, however, is the absence of Franz Nicolay makes little difference to the show’s sound. With the exception of a few harmonies (namely on “Stay Positive”), the only thing missing on-stage was the man’s face – admittedly a great addition, but for those who can get beyond that… it’s still the same band (albeit with new faces like guitarist Steve Selvidge and keyboardist Dan Neustadt). 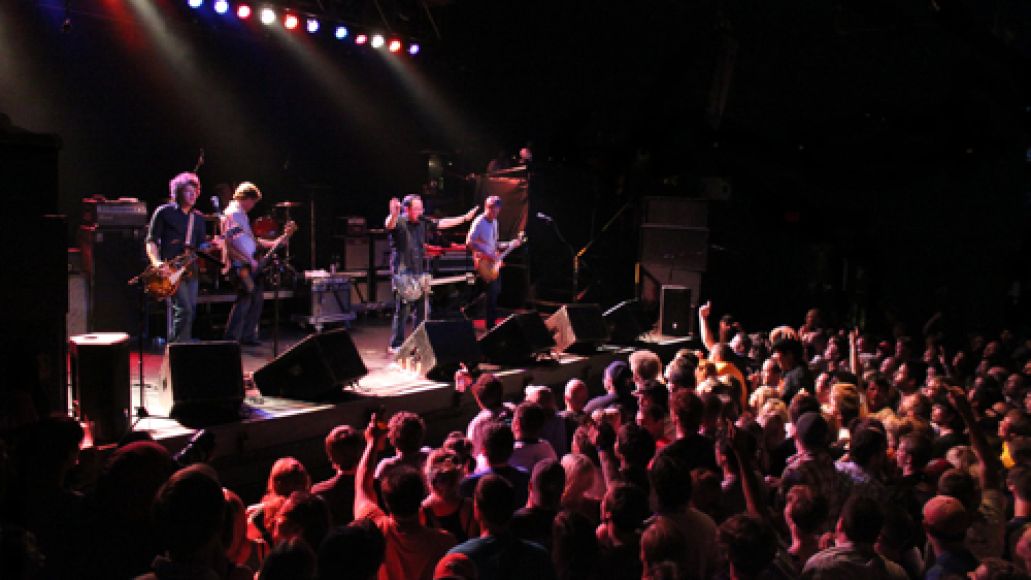 Music aside, the real joy came from watching Finn soak up the crowd’s energy. As fans waved little American flags while drunkenly singing along, an aura of nationalistic pride mixed with the good riddance that comes from returning home. It felt good. It felt really good. Finn fluttered about as usual, but with an ease that felt relaxed, assured, and genuine. He made no secret how much he enjoyed being home. When he wasn’t calling out to nearby friends at the front, he was recounting his weekend. He congratulated the city on the Twins’ fresh, new stadium, Target Field, where he had spent the afternoon. “Now there’s two reasons to come downtown,” Finn exclaimed, though he quickly pointed to the floor and added, “But this is number one.”

No need to argue there, Mr. Finn.

Setlist:
The Sweet Part of the City
Barfruit Blues
Rock Problems
Sequestered in Memphis
Hurricane J
Cattle and the Creeping Things
The Swish
Magazines
You Can Make Him Like You
We Can Get Together
Ask Her For Adderall
Banging Camp
Soft In The Center
Hornets! Hornets!
Chips Ahoy!
First Night
Stuck Between Stations
Stay Positive
Massive Nights
A Slight Discomfort