Salt Lake gets a bum rap. It really does. Often preceded by its reputation, the city of Salt Lake is usually accompanied by one unflattering word: lame. But I’m here to change your mind on that stigma. Think for a second, what are the first things that come to your mind when you hear Salt Lake City?

More than likely the first thing that comes to mind are Mormons. Those weird Mormons; with their Book of Mormon, their enormous families, and their (seemingly) overzealous religious beliefs. A few of the (seemingly) overzealous beliefs that are often ostracized and misunderstood: no consumption of alcohol, coffee, illicit drugs, or tobacco in all its forms, no tattoos or excessive body piercing, no use of expletives, especially using the Savior’s name in vain, no sexual activity outside of the bonds of holy matrimony, shying away from media that is vulgar or destructive to one’s spirituality, and my personal favorite openly criticized belief (as it hasn’t been practiced since 1890) polygamy. Well, I’ve been writing for CoS since the beginning of this year, and I’m LDS. And I’d be willing to wager what few pennies I have that few of you had any idea of my religious affiliation. You see, we’re not all Warren Jeffs.

In fact, we may be more like you than you imagine. We’re regular kids with the same regular problems and the same interests as the rest of the world. We play sports, we work hard in school, we vote, we listen to music, we get in trouble with the law every now and again. Your standard American teenager, not too different from the average Christian teen: church on Sunday, life at school and work during the week, striving to practice what we preach. When viewed in that light, really how different is that from any other Christian sect? You don’t see Catholic kids being judged so swiftly or with such generalization. What I’m saying is this: We’re not the YFZ Ranch zealots that we’re often made out to be (the LDS church holds no ties with the FLDS church, just to clarify), we’re normal American citizens who are God-fearing people much like many of you. Besides, of the 1,130,293 residents of the Salt Lake sprawl, only 58% are LDS, which leaves 42% unaccounted for. Don’t let Salt Lake’s reputation for furtive Mormons deceive you, we’re a city just like any other. 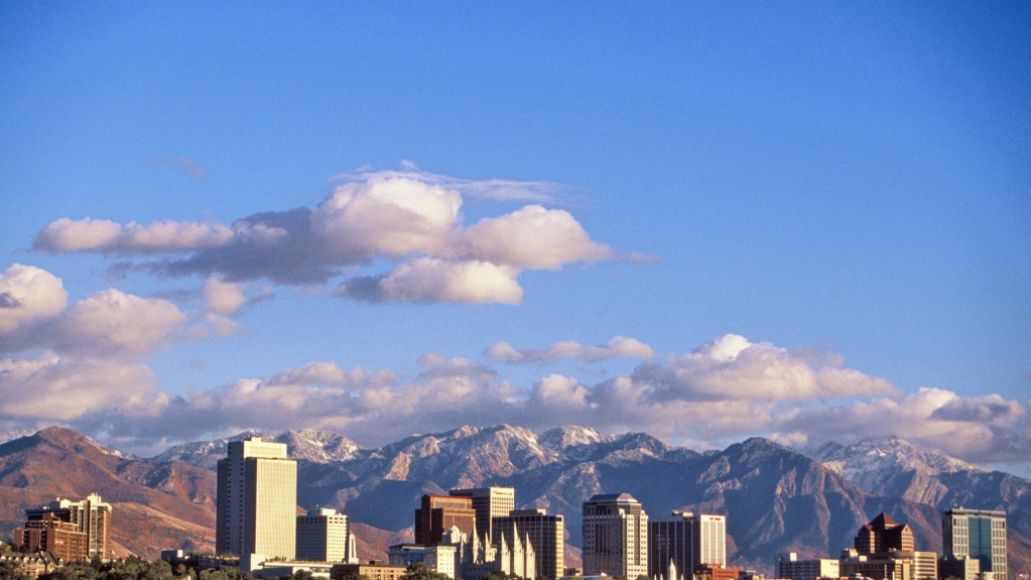 Likely the next thing you think of when Salt Lake is mentioned is snow, and you’d be quite right in thinking this. The standard Utah automobile’s license plate boldly reads: “The Greatest Snow On Earth” and eight months out of 12 there is some semblance of snow on the ground in varying degrees, depending on month, elevation, etc.; much to the delight of avid snowboarders like myself.

Maybe you think about the Winter Olympics 2002, which was a big occasion for our oft overlooked city. It brought many visitors, both national and international, and gained us some significant credibility among the U.S. population. If you’re an avid sports fan like me, you might think Utah Jazz, and by extension, John Stockton and Karl Malone. Both widely renowned as some of the best to play the game at their respective positions (point guard and power forward to the uninformed), Stockton holds both the all-time records for career assists and steals. Malone was a two time MVP and is second only to Kareem Abdul-Jabar in career points. Both were members of the ’92 Dream Team, and both are NBA Hall of Famers, and if you couldn’t tell by my gushing, they’re sort of our pride and joy.

Some of you might think of the Great Salt Lake, The Rocky Mountains, MLS team Real Salt Lake, or perhaps the Ute Native American tribe, after which the state is named. Any and all of these things would be fair to affiliate Utah with, since those are big parts of the city, our heritage, and our lifestyle.

What may not come to the forefront of your mind, however, is a thriving music scene, and it’s obvious why. Not a lot of incredible music originates in SLC. Among the alumni to gain national success are Meg & Dia, SheDaisy, and The Used. Oh, and Stevie Nicks went to middle school here. The proof is embarrassingly bleak, I realize, but it’s not the music coming out of Utah I’m here to talk about, it’s the fans in Utah. 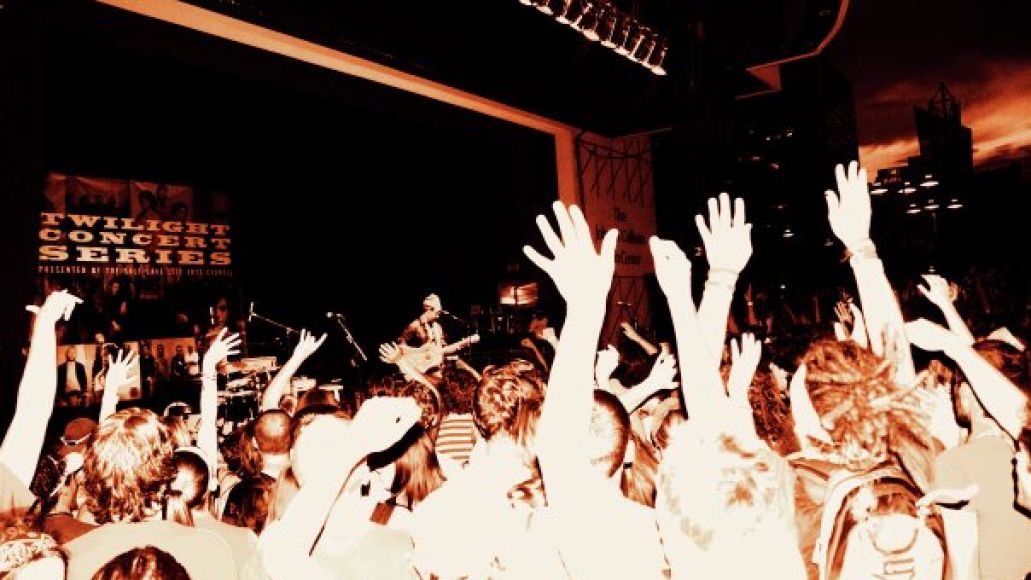 Rarely is there a night that a hyped band doesn’t stop in to play at one of Salt Lake’s numerous venues. Far more rare are nights that those selfsame venues aren’t full to the brim with adoring fans who’ve come to see some of their favorite acts perform live. I recall going to my first show at a small art gallery, at the time called Kayo Gallery, to see Islands perform on their first tour after releasing Return to the Sea. The anti-spacious room was literally too full to house all those who had purchased tickets, so the door was opened to let the crowd on the street hear and the windows were full of fans peering through for a better look. I was fortunate enough to make it inside and participate in the beautiful claustrophobia, and from that day I was hooked.

Since that night I have attended hundreds, literally hundreds, of shows in or around Salt Lake City. Major highlights: witnessing LCD Soundsystem open for Arcade Fire weeks after the release of Neon Bible, experiencing the blissful sounds of Sigur Rós on their MeÃ° suÃ° Ã­ eyrum viÃ° spilum endalaust tour, and seeing my childhood heroes The Strokes in ’06 on what would be their last tour before an extended hibernation which only ended recently.

Far more precious than any of these memories, however, are my memories of Salt Lake’s annual Twilight Concert Series held at the outdoor plaza The Gallivan Center, smack dab in the middle of downtown SLC. Every summer the Salt Lake Arts Council puts on an impressive series of free concerts (not dissimilar to Brooklyn’s Pool Parties which were just announced, incidentally) to encourage Salt Lake togetherness and further the ever-growing music scene within the city. Held every Thursday night in July and August every summer, it’s hands down the highlight of my every summer ever since its inception. And I’m far from being the only one who feels this way.

“I think the Twilight Concert Series is just a great experience,” says Salt Lake resident and Twilight regular Tiffany Mankin, who expresses her love for the series. “You get a lot of wonderful bands playing these free shows that anyone can come see. You get lots of different people there of all ages just enjoying the music. You sometimes make new friends at the shows. I think it also shows that Salt Lake City is a great city for music and that a lot of the people that live here love music and live shows.”

And she’s right. The atmosphere is so lighthearted and jovial. Everyone’s off work, hanging with friends, basking in the summer heat, showing off their hippest outfits, meeting new people, laughing, dancing, and having a genuinely good time with their fellow SLC punks. And it’s so far from being limited to the young, informed hipsters. People of all shapes and sizes gather to see the shows.  It’s an incredible melting pot of people that show up, from die-hard fans who’ve been staking out a good spot all day, homeless men who’ve wandered in because they heard the noise, or families looking for a good wholesome night out of excellent entertainment that costs them nothing. And when I say excellent, I understate in no way. 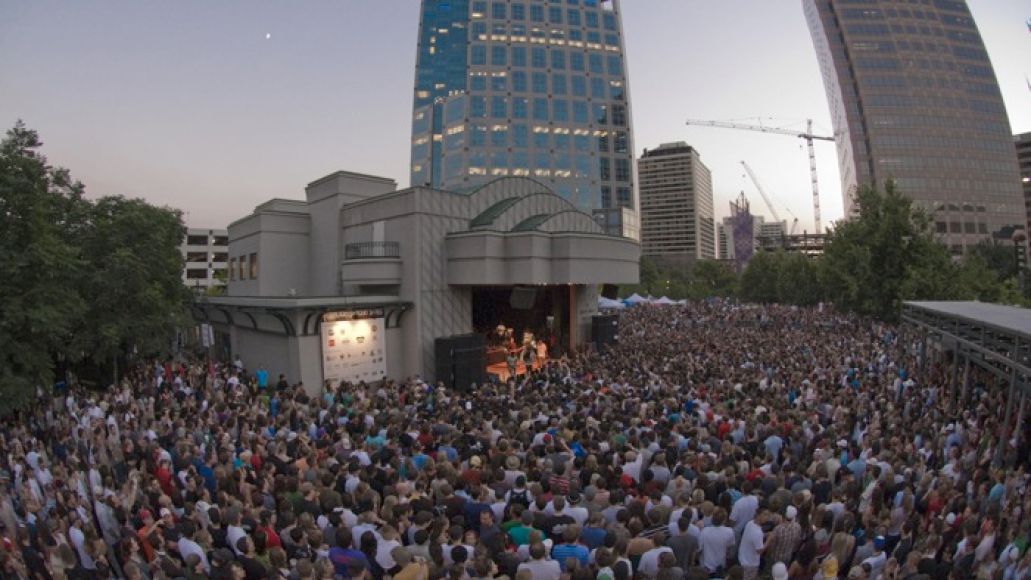 The Salt Lake Arts Council goes all out for these shows, and as such, the lineups are no joke. Among the artists to have played the series since it started in the summer of 2006 are Calexico, Michael Franti, Yo La Tengo, Dr. Dog, The Roots, Andrew Bird, De La Soul, Clap Your Hands Say Yeah, Neko Case, Broken Social Scene, Bon Iver, Jenny Lewis, The Black Keys, M. Ward, Sonic Youth, Q-Tip, and Iron & Wine.

Truly, they always do. It was no easy feat this year, however. It was rumored that the series might not happen this summer due to ongoing construction at the Gallivan Plaza, which would have been a major catch-22, because the reason for construction is to help accommodate the rapidly growing crowds that congregate for the Twilight Concert Series each night. Fortunately, this year they decided to champion on, only relocate temporarily. As a result, the series will be held this year at Salt Lake’s notoriously shady Pioneer Park, which will either add to the allure of the series, or simply increase the city’s murder rate. Either way, you can bet I’ll be there every Thursday night this summer as the lineup is more impressive than ever.

Opening night (July 8th) will see Avi Buffalo opening for none other than Modest Mouse. Further out, we’ll see performances by Memory Tapes, Girl Talk, Beirut, Twin Sister, The New Pornographers, The Dodos, Sharon Jones and the Dap Kings, Jamie Lidell, Big Boi, Chromeo, Dum Dum Girls and She & Him. Who could ask for more from a FREE concert series? Not only will I be there every Thursday night this summer but every Thursday night in the foreseeable future summers. And I can guarantee that there is a legion of SLC punks that think alike.

If nothing else is taken from this article, I hope one thing remains in the minds of all: Salt Lake isn’t to be overlooked, especially Thursdays in July and August. Salt Lake fans are here to stay and we love our music.