Friday Night Lights is a non-fiction sports novel, let’s get that out of the way first and foremost. Without intentionally buying into stereotypes, I find it doubtful that many of you have read this book, seen this movie, or watched the TV series; even less done all three. Not because you’re “artsy” or “into music” or what have you, but let’s face it, we all feel a certain affinity for a similar mindset that usually accompanies the music we listen to. We weren’t (and aren’t) the letterman’s jacket-wearers, the student body officers, or even the kids who went to class that often; and that is who this book is about. But if we could all just step out of our normalcy for one minute (once again, I apologize for any implied stereotypes) and into the wide world of sports.

I include myself in the alleged stereotype (takes one to know one), but incongruous with the rest of the prototypical indie kid attributes, I’ve always had a certain fascination with, and knack for, sports. I grew up playing little league, recreational soccer, and comp lacrosse. Basketball was my first love, however, and continues to be the only sport I play regularly. The only thing that surpassed my participation was my fandom. And I was certainly in the right place for that.

I grew up in a suburb of Phoenix, and as such I was and am an avid Suns fan. I moved to SLC when I was nine, and I was forced to put the Charles Barkley adoration on hold and adopt the Stockton to Malone mindset of the Utah Jazz, which was fine with me because this would be their year (almost). The Jazz saw repeat stints in the NBA Finals in ’97 and ’98, both times falling to the omnipotent Michael Jordan and his Chicago Bulls. I cried each time as they lost by inches to the unstoppable MJ. It was that important to me.

My reason in saying all this is to boost my ethos in the arena (no pun intended) of sports. You can like sports and music at the same time, contrary to popular belief. Some of the jocks like music, and some of the musicians like sports. If you really look at it, it’s a much less clear line than we often perceive it to be 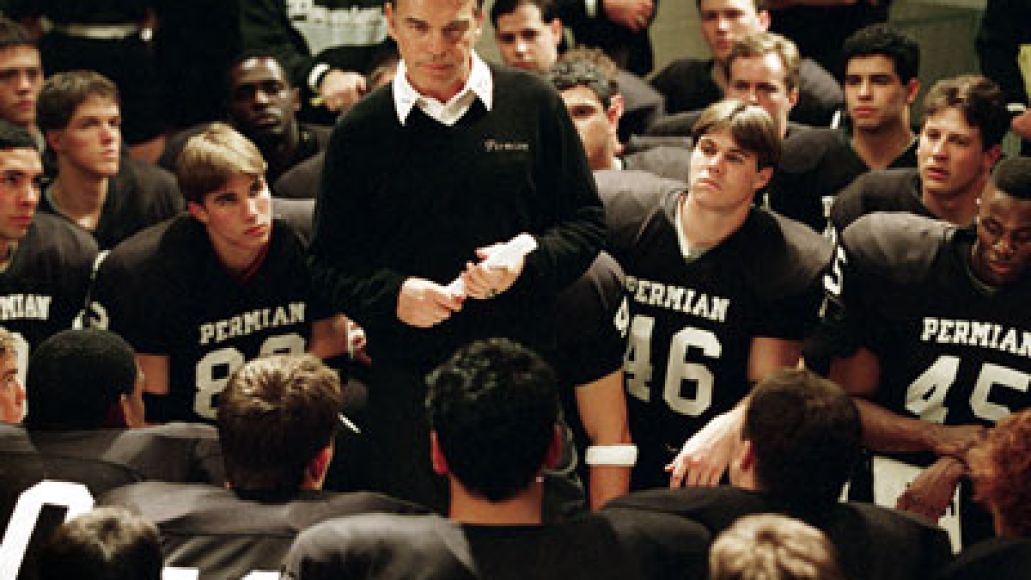 Besides, Friday Night Lights isn’t just about about sports. H. G. Bissinger’s groundbreaking non-fiction piece chronicles the 1988 season of the Permian Panthers of Odessa, Texas, but more than that, it chronicles the culture of Odessa and the state of Texas with regards to the Panther’s season. Along with football, Bissinger tackles the subjects of a failing oil based economy, abhorrent racism, compromised morals within the integrity of Texas schooling, and how it feels and what it means to be a teen preparing for adulthood – the pressure, the urge to rebel, and the absurdity of the whole concept.

Bissinger’s angry expose tells the reader of way the town revolves around the team. From September to December, how the team is doing equals how the town is doing. In a failing economy (the town built upon a now-dry oil supply), it’s all many individuals have to look forward to, placing massive responsibility upon the shoulders of the 17 and 18-year-old Permian players. Some succumb to the stress, others thrive. No matter what the outcome – outright victor or complete bust – every player falls victim to the town’s expectation of the Friday night lights.

Sound like the hard-hitting tale you might like to soundtrack? Explosions in the Sky sure thought so. Maybe it was the tale itself that enticed them to do so, or maybe it was the fact that they themselves experienced a bit of that Texas nightmare firsthand, so it hit close to home. Straight from the horse’s mouth:

Every once in awhile someone asks us how we ended up working on a big studio movie about football. The simplest answer is that we got an email. This particular email was from Brian Reitzell who was the music supervisor for both The Virgin Suicides and Lost In Translation (two movies that we are quite fond of). He said he was working on a new movie and he was wondering if we would be interested in doing music for it. We told him we would. He got back in touch with us a few days later and told us that the movie he was working on was called Friday Night Lights. He didn’t really have to explain much as we were somewhat familiar with the book and even more familiar with the setting of the story. West Texas. Midland and Odessa. This is the part of Texas where three out of the four of us grew up. We all read the book and we loved it. It was sad and joyful and depressing and triumphant and funny and ugly and exciting. We said yes.”

Whatever the reason, Explosions in the Sky provide a chilling yet beautiful backdrop to match the emotionally charged story that is Friday Night Lights. The band stuck to their guns, using their signature ethereal sound (which is fairly cinematic anyway) to soundtrack the chapters of the Permian experience. Not their best work, but their most fitting undoubtedly. It sounds like an unreasonable combo, but the first time you hear the layered guitar and muted percussion while watching the football soar through the air, with the hopes and dreams of an entire community riding on it, it all begins to make sense. Explosions has the innate ability to take something simple, and bring out the epic in it, which makes them the perfect fit for scoring this film.

And the fun doesn’t stop there for the Texas quartet. Based on the success of both the novel and the film adaptation, the powers that be decided to keep the ball rolling by adapting the story for a TV series. And the Explosions didn’t stop either. Explosions in the Sky licensed much of their catalogue to the series, including one of their original compositions for the film version of FNL. Also, the theme for the song, and certain sequences of music are written specifically to sound like Explosions.

And though the TV series twists the story quite a bit and adds a pinch of teenage melodrama that was previously unseen in the film and novel versions. Don’t let this fool you, however, this show is no joke. Over four seasons it has won nine Emmys and continues to win the hearts of critics and viewers alike.

And the soundtrack ain’t bad either. Much like the film, the show circles around the stories of the town with regards to football, and does so with a stellar soundtrack to top it all off. Split up into two different volumes, the retail soundtracks includes songs from Explosions in the Sky,  of course, A.A. Bondy, Calexico, …And You Will Know Us By The Trail Of Dead, Iron & Wine, Jakob Dylan, Jose Gonzalez, Outkast, Spoon, Sufjan Stevens, and The Avett Brothers. Artists used in the actual show include LCD Soundsystem, The Black Keys, Pearl Jam, Beck, Yeasayer, Yeah Yeah Yeahs, TV On The Radio, The Album Leaf, Broken Social Scene, Rogue Wave, Death Cab For Cutie, Wilco, UNKLE, Devendra Banhart, Rye Rye, and Little Joy, among countless others. 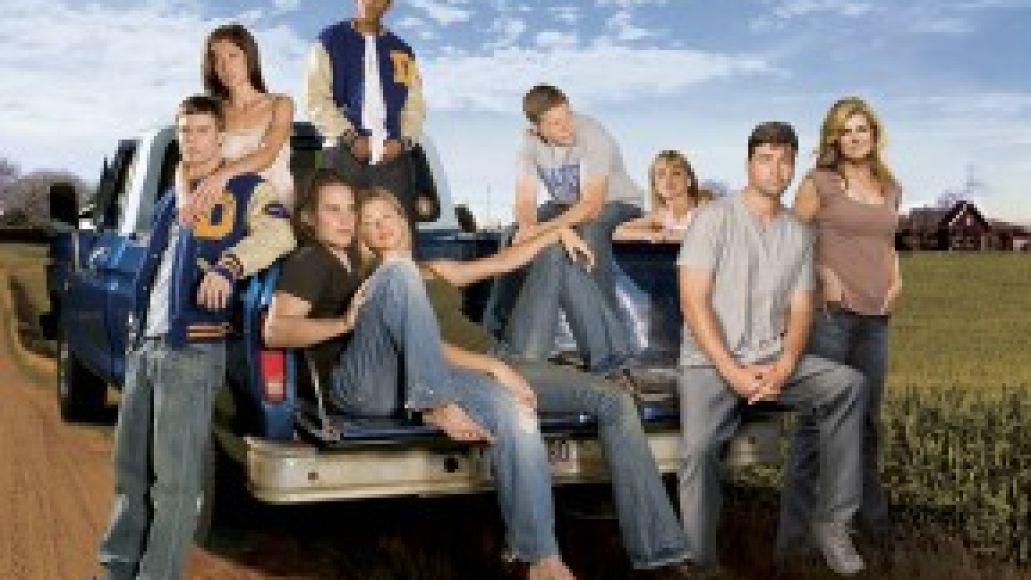 Using this list of artists, the producers of the show create a very believable musical atmosphere, and do so in a subtle fashion. No songs are used shamelessly nor does the show use its music as a crutch (here’s lookin’ at you, The OC). One of the characters is a big Liars fan, but you’d never know that unless you had a trained eye. Posters and buttons are the only things that indicate of any Liars affiliation. Later on, when messing around on guitar, one character plays a rendition of The Flaming Lips’ “She Don’t Use Jelly”. At one point in the show, perhaps a little less subtly, Heartless Bastards make an appearance as two of the main characters from the story go to one of their shows in Austin. At any rate, the songs are used less as a device to sell the show to indie kids, and more of a way to move along the story with a little more beauty. After all, you don’t like all the aforementioned bands for no reason; you love them because they create beautiful music that makes you feel. And somebody at Friday Night Lights realizes this and utilizes it in every show.