As I walked into the tiny and packed Back Room at the Black Cat, the crowd of only a couple hundred had already worked up a sweat, thanks to openers The Spinto Band. This stop in D.C. marked the tail end of Miniature Tigers‘ month-long tour that saw them hit Lollapalooza while club-hopping along the way, all in support of their latest and excellent record, Fortress. It was also the last night with The Spinto Band, and they celebrated justly when the time came at the end of the set.

It took a couple songs for Miniature Tigers to warm up, opening with the first two tracks off Fortress. This show, on the surface, was about playing the new stuff. The set saw Fortress played almost in its entirety, only skipping over “Dark Tower”, but no one was complaining. Below the surface, however, the show seemed to be about discovering new friends amongst old fans, and rejuvenating those older followers with new material as they worked hard to claim a place in the indie rock world.

Miniature Tigers hit their stride quickly with the opening vocals of “Bullfighter Jacket”, following their record’s track listing into “Egyptian Robe”. This is when the night truly took off, the people and the band warmed up and ready to go. The lighter moments became playful; the heavier, more sonic, blasting out like they were meant to. It showed that this is a band of many sounds that is damn catchy and has no trouble staying that way well off the record.

They seemed the most gleefully excited, however, when old tracks like oldies “The Wolf” and “Tell it to the Volcano” whipped up screams and cheers followed by loud word-for-word enthusiasm as the crowd sang along. The smiles on the band members’ faces at these moments showed a certain humility, that they may never get used to hearing their words sung back to them so automatically without any provoking. For those new to the band thanks to some NPR play, it might have surprised them as well, stumbling upon such an established fan base. 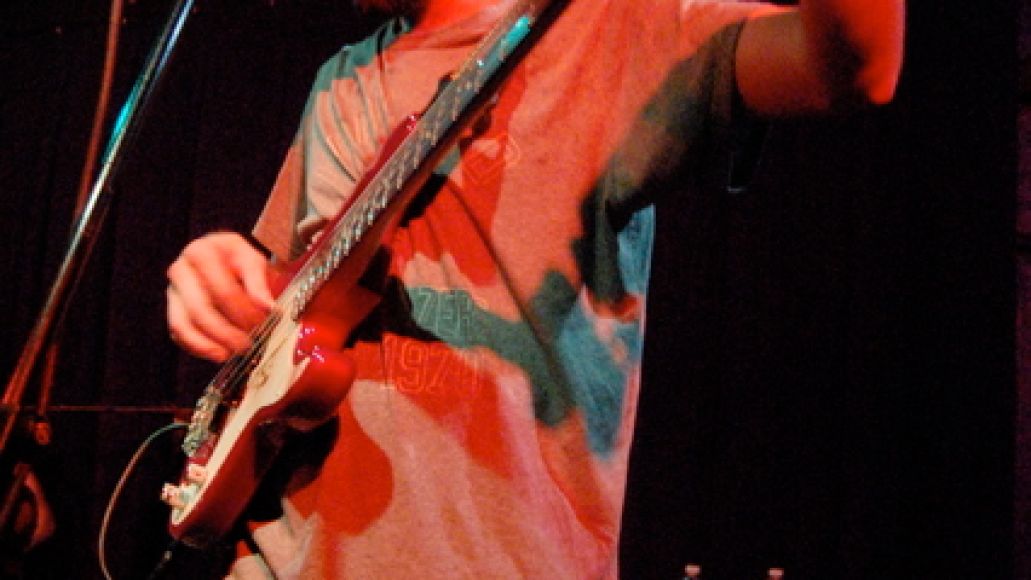 Throughout the night there was an inescapable, organic excitement amongst the small crowd. They danced, threw their hands up, and seemed to be having the best Tuesday night they’d had in a long time. The Neon Indian-produced “Gold Skull” saw front man Charlie Brand dropping the guitar and hopping into the crowd for the dance party the song was meant to be. He jumped and danced with everyone he could in the short three minutes he had. Afterward, he proclaimed, sweat dropping down his forehead, “I’m here tonight, and it’s party time!” before launching into “Tropical Birds”.

A bear-costumed individual made their way onto the sage for “Lolita”, gyrating and providing theatrics via a rain stick that didn’t quite make the mix, but that didn’t seem to matter much. One more proclamation to ignite came before oldie “Cannibal Queen” as Brand shouted, “Let’s whip this joint!” The Spinto Band came back out to join in on the fun as back-up dancers, singers, and rattler shakers all crammed the small stage to the brim. It was the apex of the night, and for them, the tour, since this was the last the two bands would be playing together.

A quick, almost unnecessary break was taken before skipping back out for two more songs. By that time, much of the packed Back Room space had thinned, leaving a warm huddle around the stage to enjoy and sing along one more time to the youthful lust of “The Wolf” and “Last Night’s Fake Blood”. A fan was invited onstage to help out on tambourine because this was a night just as much about the fans as the band on stage.

For a band still playing small spaces, it’s quite something to have made such an impact, even if their following is still relatively small, but last night’s atmosphere could be a sign of things to come. The only complaint was that their sound at this point is so much bigger than the space they were put in. The new songs especially demand a wider space to stretch out in, to reach the full effect you get on the record, and it was hard to gather that at times. This is not the Tigers’ fault though, and to give them due credit, their live show is definitely something to see. I’ve said it before – look out, because here they come.

Miniature Tigers cuddle up to the Black Cat (8/17)