Wow, these guys again? Probably what everyone muttered when the Metro announced its fall lineup – and rightfully so. For the past nine months, Chicago’s hosted each of these buzz bands nearly half a dozen times. Male Bonding surfed up with The Soft Pack earlier this year, Best Coast washed ashore back in April (and again in July for Pitchfork, and a late-night show, too), Free Energy probably owns real estate in Lakeview at this point, and Titus Andronicus, well, they just don’t know when to stop. But, that’s okay. We’re totally fine with this. They’re all supporting fine releases – specifically the headliners – and, for the most part, they’re probably the best in their genre, at least when it comes to putting on a live show. Plus, it’s sort of like a market deal to see ’em all under one roof.

How did this not sell out?

Well, if it did, then the Metro probably wouldn’t exist anymore. By night’s end, fans shuttered in at near-near capacity, storming the stage and insisting upon claiming their share of the floor. What’s more, the night delivered an unquestionable, full-on American rock ‘n’ roll package. Screaming? Duh. Cajoling? Mostly. Crowd surfing? Almost every minute. Questionable nationalism? Surprisingly, yes. Exhausting? Fuck yeah. From the get go, and given the tight, four act bill, starting the show at nine seemed like a horrible idea. How late did they expect this to go? But, things went smooth and according to schedule. Almost like science. Male Bonding unwrapped the night, arriving to a mid-size crowd, mostly interested in conversation and drinking. However, they chomped away at their latest debut, Nothing Hurts, with all the fuzz and hush hush vocals they’re somewhat known for, which hardly incited more than some mild applause here and there. Whether or not they’ll be able to carry a bill on their own remains a mystery, but they make do as a quintessential opener. Perhaps on their sophomore effort they’ll conjure up something bold. 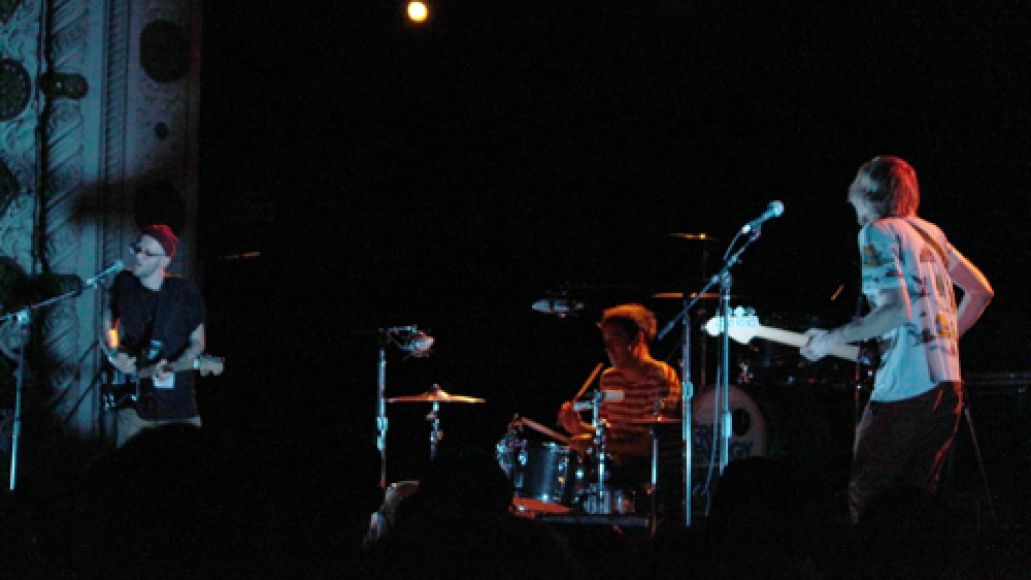 On the other hand, Free Energy grasped every second of the opening slot, acting less like a third billing host and moreover like rock gods from the ’70s. Frontman Paul Sprangers looks like a surfer-turned-rocker, the sort of guy you’d find in the back of math class, cracking jokes to the four friends around him. His hair swims about the air, his legs kick and dance, and during every song, there’s this friendly vibe to him that makes you certain he’s just as entertained as you are. The rest of the band keeps up the energy, too. (Ugh. Pun intended. Whatever.) Songs “Bang Pop” and “Dream City” might be old school throwbacks to rock ‘n’ roll high school flare like Thin Lizzy or Cheap Trick, but, in all honesty, it’s just so damn refreshing to hear riffs again. Not just fuzzy, adrenalized riffs, either. We’re talking clean and concise riffage that would make Tom Scholz (of Boston) jealous. These days, it seems like so many bands are terrified to play their guitar. So kudos to you Scott Wells for going the distance. It’s working. Critics can praise this band from here ’til tomorrow, but at the end of the day, all you have to do is watch a crowd. And if audiences across America are anything like those at the Metro, then this band has little to fret about. Well, except on the guitar. Womp. Womp. 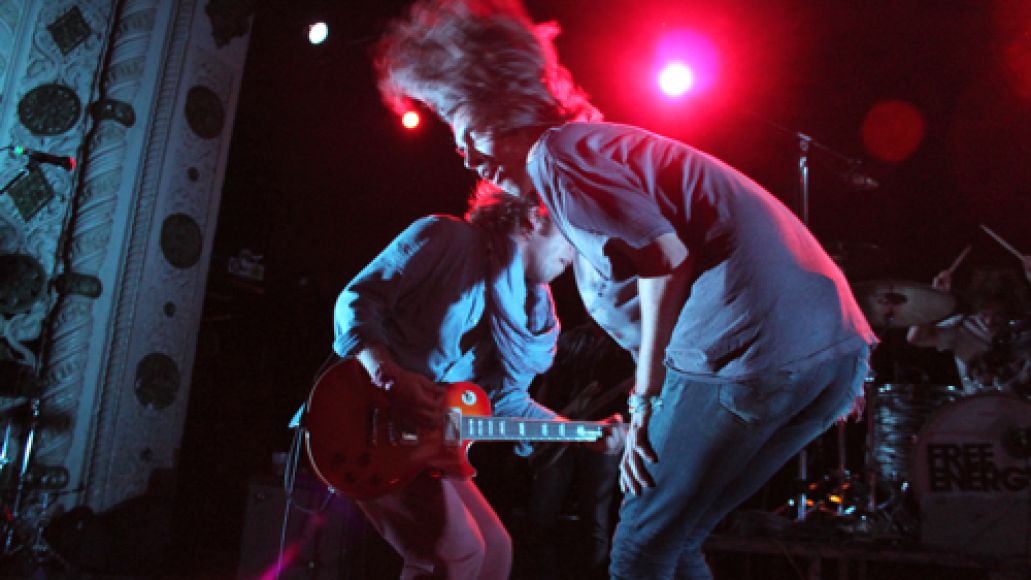 Fifteen minutes later, Bethany Cosentino embarked on a purely blissful 45 minutes. Where Sprangers brought some personality in action, Cosentino delivered in wit and charm. Between observations about the venue (“This is the first place we’ve played with a balcony.”) to anecdotes about smoking with Monica Lewinsky (“I have touched Bill Clinton’s dick. It was pretty presidential.), Cosentino’s fraternal personality engrossed fans, both new and old. And despite touring incessantly, her vocals remain top-notch. She even plays some tricks, too. On set opener, “Something in the Way”, she bent a few of the chorus’ vocal notes, creating this sultry, psychedelic tone that translated really well to the venue’s moody light show. In fact, despite their sound’s ties to beach pop, Best Coast‘s summery glaze worked wonders for the near-autumn, midwestern night. On “Our Deal”, the honeycomb melody rang out precise yet felt ultimately nostalgic, and the same goes for “I Want To”, which started rather melancholic and erupted into a dance-y fiesta of sorts. The only song that felt stripped from the sandbox was new single, “Boyfriend”, which Cosentino dedicated to one of her fans, who requested it via Twitter to propose to his girlfriend. Touching, huh? Precisely. 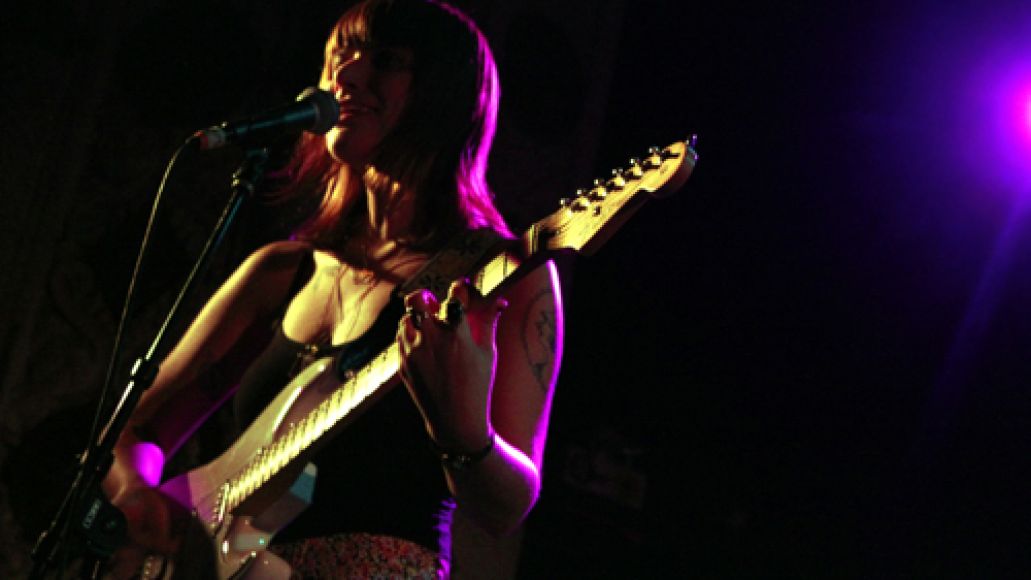 But last, and (obviously) not least…Titus Andronicus. What else is there to say about this band? They take rock ‘n’ roll to another level. They get it. They know its edges, its depth, its dexterity, and they run with it. Far. Frontman Patrick Stickles not only carries the weight of indie rock ‘n’ roll – he is indie rock ‘n’ roll. He may appear as thin as Jack Skellington these days, as fashionably obtuse as Abe Lincoln, but he’s the epitome of strong and cool. He doesn’t sing so much as he rips his rib cage apart and tears his soul out, sharing it to the audience. And while this Metro show might have been his thousandth gig since early this year, and he gives off the impression that he’s dying of near-exhaustion, he still picks up the stage and turns it on its head. He’s so goddamn optimistic, too. As he inched through the hour and 15 minute set, he kept muttering, “That felt good,” after every song. At one point, he told everyone they were “on their way to a pretty sweet Saturday night,” eventually concluding that “it’s good to be alive.” During the eight-minute closer, “Four Score and Seven”, that sentiment couldn’t be closer to the truth, as every soul that basked next to Stickles’ felt the true meaning of a rock ‘n’ roll show. You’re alive, you’re moving, and you’re feeling “it.” Nobody can really define what “it” is, but who needs definition when the feeling’s so positive. Ambiguity reigns supreme. 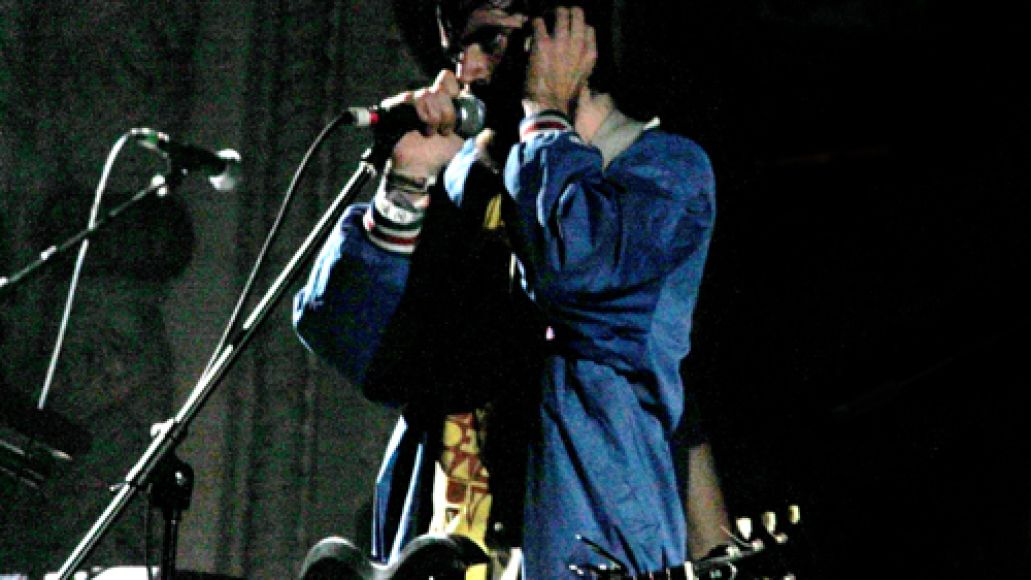