Damon Albarn must be an extraordinary friend. After all, he attracts one eclectic ensemble of pals. Whoever thought the former Blur frontman would share a stage with Mick Jones and Paul Simonon of The Clash, or sing alongside Bobby Womack, or have their album cracked open by Snoop Dogg, or even slash the Billboard charts with De La Soul? All of these things couldn’t have happened with his former British alt rock band. Instead, he needed to redefine himself. In hindsight, he just took it to the next level.

Whereas most songwriters turn to darker material, or flip the switch and go electronic, Albarn painted a new persona – literally. With Gorillaz, Albarn, alongside co-creator Jamie Hewlitt, not only reinvented himself, he redefined any expectations any critic, fan, or outside observer could conjure up. He stripped off all pretenses, hit the pad and paper, and assembled such a unique sound that it’s near-impossible to bottle it up in a genre. In actuality, he’s created a wonderful franchise. You could say he’s the Walt Disney of rock ‘n’ roll, come to think of it.

If we’re to take the Gorillaz recent stop at Chicago’s UIC Pavillion into consideration, then yes, it’s quite a safe critique. Strolling the halls of the collegiate venue, thousands of fans congregated together, all wearing Hewlett’s characters on their shirts, jackets, or sweaters. Some even dressed up as pirates, or simply put on naval caps, to celebrate the group’s latest album, Plastic Beach. What’s better, many of these folks were in long, tiring lines…to buy more gear. Hey, if fans won’t buy the music, at least they’ll buy into the franchise. A ha, now we’re getting somewhere – but let’s focus on the show for a moment.

Right on time at half past seven, N.E.R.D.‘s Pharrell Williams bombarded the stage with his mini crew, complete with two exotic dancers to boot. While plenty of Gorillaz fans kept to themselves in the venue’s hallways, the tight, hype-inducing set delivered plenty of highlights for the night. Past singles “Lapdance” and “Rock Star” sound dated this far out, but the group’s new material, off their forthcoming album, Nothing, saved the set. With funky slingers and jazzy rhythms, the new tunes revealed a band that feels ready to change up things – and for the better. One track titled “Hypnotize U”, which Williams announced he’d worked with Daft Punk on, went over really well, and admittedly it sounds fairly sexy, too. 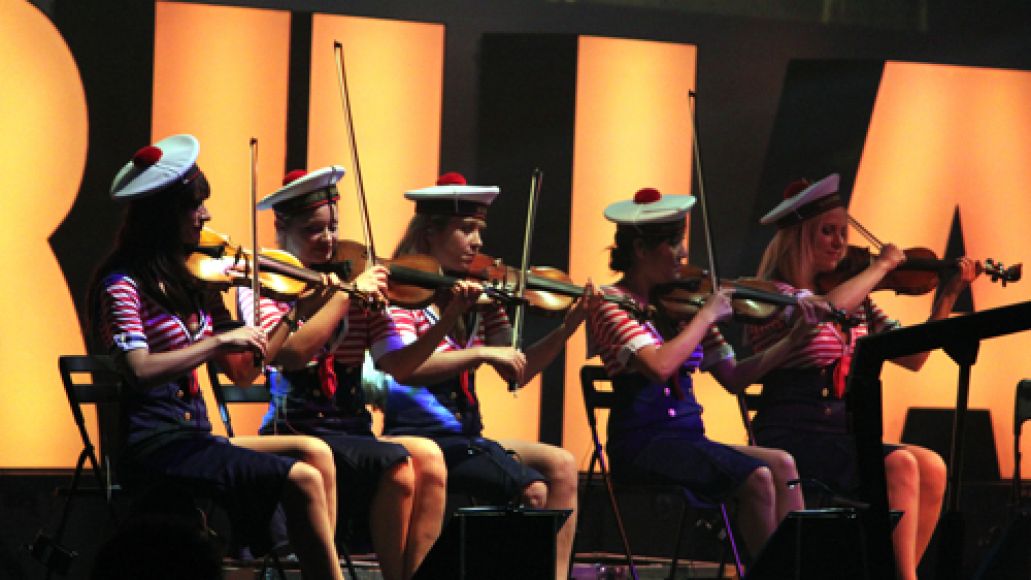 Then came the real show. Once the lights hit, and a couple of awkward minutes passed, the Gorillaz graced the stage’s center screen. Not Albarn, of course. The actual Gorillaz, as in 2-D, Murdoc, and, well, an electrified Cyborg Noodles dangling in the background. It appears the cronies, animated in beautiful computer animation, have found themselves stuck in the venue’s dressing room. Now, some may find this cheesy, but it’s really not. It adds to the dynamic that sells this band. These personas are just as important as the music itself. The crowd made that rather clear when they screamed in excitement for their fictional compatriots.

Then came the real band. Let’s just get this out of the way now: Albarn’s not only a magnet for talent, he’s a goddamn composer. In addition to Jones and Simonon and Womack and De La Soul, he’s put together a full on opera for this tour. String section? Um, over in the back. Multi-percussionists? Yeah, yeah over in the middle. How about a Syrian music section? You got it. Where’d the brass ensemble go? Ah, right, they’ll return in a bit. There isn’t a single aspect of the music that’s left out. But, this isn’t really so much of a realization as it is a shock five seconds in, when the band immediately recreates the lush, cinematic “Orchestral Intro” to Plastic Beach. It’s almost as if you’re in a perpetual state of denial, thinking, “Nah, this couldn’t just be the band up there. Oh, wait, that’s the whole band… wait, there’s more… who else is coming up now?” 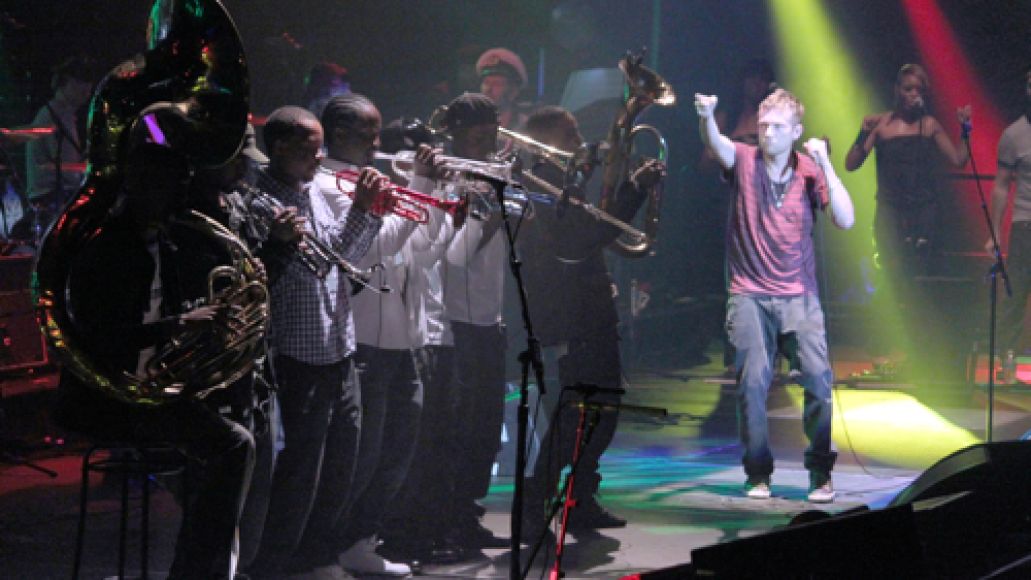 Visually, musically, energetically, and situationally it’s one big clusterfuck. As for Albarn, he’s hopping between microphones, switching on and off instruments, dragging out props and flags, and playing to different sides of the stage – all while keeping his baggy pants up. At one point in the show, he stopped himself at the piano, apologizing, “I got completely lost in that lil’ world there.” He’s not alone. Whether we’re being whisked away up “On Melancholy Hill” or seeing what’s in store for “El MaÃ±ana”, there’s little room for thought. It’s so involving that it begs you to accept this fictional world as reality. Sure, they’re just music videos behind a larger-than-life band, but in addition to the “backstage” video interludes and the set list’s sequencing that’s incredibly faithful to the band’s fictional plight and story, you can’t help but plug in, too.

But that’s why you’re there, isn’t it? If you’re a truly devoted fan, you bought in almost a decade ago with “Clint Eastwood”. You’ve fully accepted these cartoon characters and you’re willing to pry your eyes off of commanding musical authorities like Jones or Simonon and, instead, fully absorb what’s unfolding on-screen. No, really. Towards the end, when Womack unbuttoned his soul during a passionate rendition of “Cloud of Unknowing”, several fans hardly watched. They no doubt listened, and thoroughly enjoyed it, but their gaze didn’t rest on Womack. Instead, they kept tabs on Noodles, or 2-D, or Murdoc, as they trekked through one of Hewlett’s concluding adventures. Bizarre? Arguably. But, cool? Absolutely. 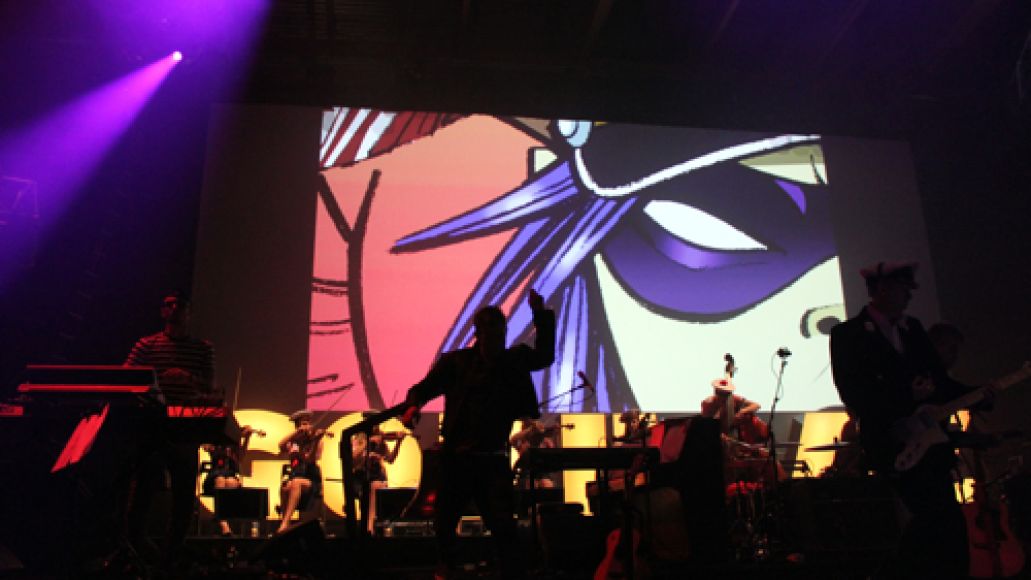 The word “franchise” doesn’t sit in the stomach well. It brings to mind words like “evil” or “shady”. Albarn knows that. However, he also knows we live in a much different world. With the digital revolution, social networking, and the expanse of multimedia, Albarn recognizes today shares little to nothing with the scene of yesteryear, specifically the ’90s. He and his Gorillaz capitalize on these notions. They cross genres, knowing damn well that folks today tire songs fast. They build stories, adding emphasis to lyrics and themes that would otherwise lie dormant in a notebook under the bed. But, above all, and at least in keeping with the actual show here, they create an event, when we live in an era where fans expect and demand it. There’s a reason the ticket price hurts the wallet on this tour: It’s not a concert, it’s a full-on virtual experience.