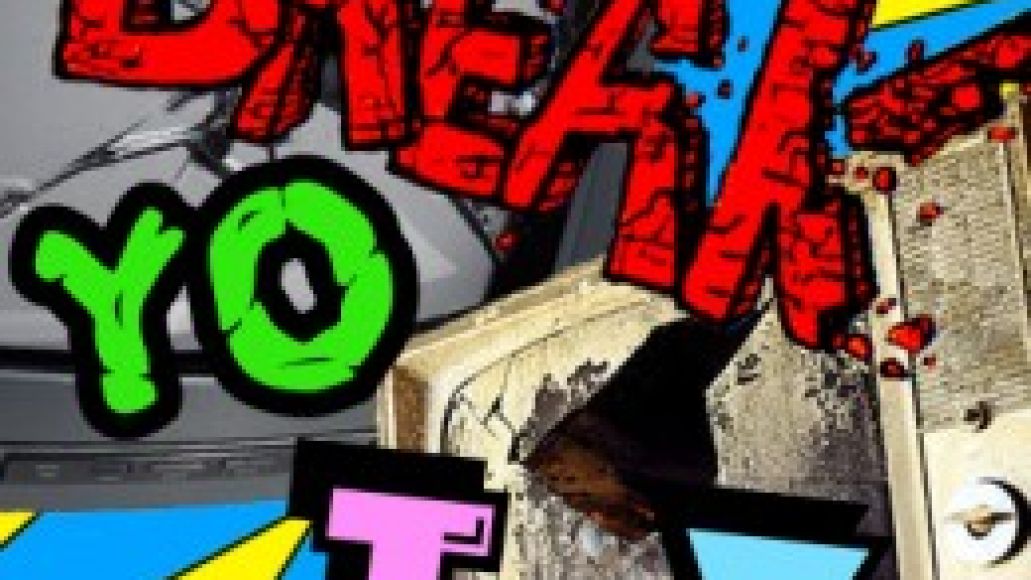 If there’s ever a time of year when the advertising industry doesn’t let up, it’s Christmas time. Mad Men’s Don Draper would proudly boast that Christmas is merely a feeling and lie that he and his cohorts created to sell cola, cookies, and coffee. In actuality, this is slightly true. Commercials create the sensation of feeling warm, fuzzy, and personally complete by making every product seem like it will bring joy to your family during the holiday season. However, it also points out what children should start begging their parents to buy them. This usually all starts the minute the Detroit Lions walk onto the field on Thanksgiving, and after that, it’s open season on your parents, the mall, and your television. ‘Tis the season…

To start this edition of Break Yo’ TV on a truly retro note, we turn our direction to the Gap. You will more than likely open one gift from the Gap (or Old Navy, or Abercrombie) upon Christmas morning. It will come in a long, brown, and unmarked box, and if you are under the age of nine, chances are you will be pissed it isn’t a train set or a Megazord (still waiting, Mom). But in the 90s, the Gap got me truly excited about the possibility of owning a sweater or a new pair of jeans. How? Because they got the ever-hip Everclear to rock their commercials with an alt-rock rendition of “Rudolph the Red-Nosed Reindeer”. Complete with jittery ’90s style cuts, humorous resizing with computers, and punk rock antics, this commercial definitely had me slightly excited as a small child for the Gap…even if it was only a cover song.

The next ad keeps us right in the ’90s, as it butters us up to head out to Target and buy our children an original Nintendo gaming console. Honestly, I wouldn’t mind this happening nowadays, but this commercial goes about hustling Nintendo the wrong way. This beloved 30 seconds of television stars none other than Aretha Franklin (second article on commercials I’ve written with the diva).  In the commercial, Franklin is seated in the back seat of a car. Obviously, she’s rich, and therefore does not need to drive herself around when the roads are so icy.

Franklin gazes out the window longingly, looking at shoppers, shop windows, Christmas trees, and the snow on the pavement. Superimposed over the scenery is an image of a small girl (presumably Franklin’s daughter) peering out a window with anticipation. Franklin sings some soulful mumbo-jumbo about “bringing Christmas home,” and when she arrives home, immediately hugs her daughter.  No exchange of the Nintendo is made, but it cuts away to a cliché male voice saying, “This holiday, bring home Nintendo.” Right before another commercial for soda comes on, though, Franklin hugs the girl for a few more seconds, showing parents everywhere that their children MIGHT appreciate them if they get to play Super Mario Brothers on Christmas morning.

This next commercial was just too good to pass up. During my “research” for this article, I stumbled across some Dr. Dre-casted Christmas ads. Obviously, I had to click on them and at least watch them. I’m not sure if these ads brought families together, convinced anybody to buy The Chronic, or helped Dre boost sales, but nevertheless, they embody that amazing Christmas spirit that Americans seem to embrace (that spirit is commonly referred to as “capitalism”). The first ad contains some smooth g-funk beats as the camera pans down from some mistletoe to Dre embracing a young female. The two kiss, and are then interrupted by the most obnoxious Rasta voice imaginable posing the question, “What makes Christmas better?” Dr. Dre gazes up in deep thought as the camera pans back to the mistletoe, which is now attached to a phat and sticky leaf of chronic. “The Chronic from Dr. Dre!” the Rasta says. The next ad is merely a pan around a Christmas tree to reveal another chronic leaf, with a Dr. Dre ornament hanging from it. “The Chronic,” a female voice says, “the gift that keeps on giving.” She’s certainly got that part right about the holidays.

Now, what would any article on Christmas commercials be without an ad from Coca Cola? Coke has been on top of the Christmas spirit since advertising has existed, and has even been able to brand themselves as the soda of the holiday season. If you don’t believe me, watch Ernest Saves Christmas. If you don’t feel like watching Ernest, I will say my local grocery store had a large Santa built from Coca-Cola boxes on display. Either way, Coca Cola’s most classic and most obnoxious Christmas ad campaign is their numerous renditions of “I’d Like to Teach the World to Sing,” a song that Oasis would rip off later in life. In the ad from the ’70s, Coke makes a valiant effort to show as many different ethnicities of people as humanly possible in the first three seconds to show how united we are around the holidays. As the camera zooms out from all the diverse singers holding candles, their shape goes on to form a Christmas tree, showing we are all united by our ownership of Christmas trees and mutual love of Cola. Good to know everybody else out there is just like me: fat, loaded with sugar, and unhealthy.

Every Christmas season, we have to be ready for the whole nation to become the North Pole. In every store, there are Christmas decorations littered all over, various sales displays themed around the holidays, and plenty of products that sell out for Santa. It’s to butter everybody up for the season, and I will say as a consumer, it truly does affect me a bit. Even though I hate the ads and the message they generally send to America, it does get me a bit excited to know soon I will be with my family, enjoying several of these products and the comfort of a fire near the Christmas tree. The ads may deliver the illusion of completion during the holidays, but nothing is better than actually experiencing it with your family, no matter how many shitty commercials you must watch together. Happy Holidays, everybody; enjoy and be safe.