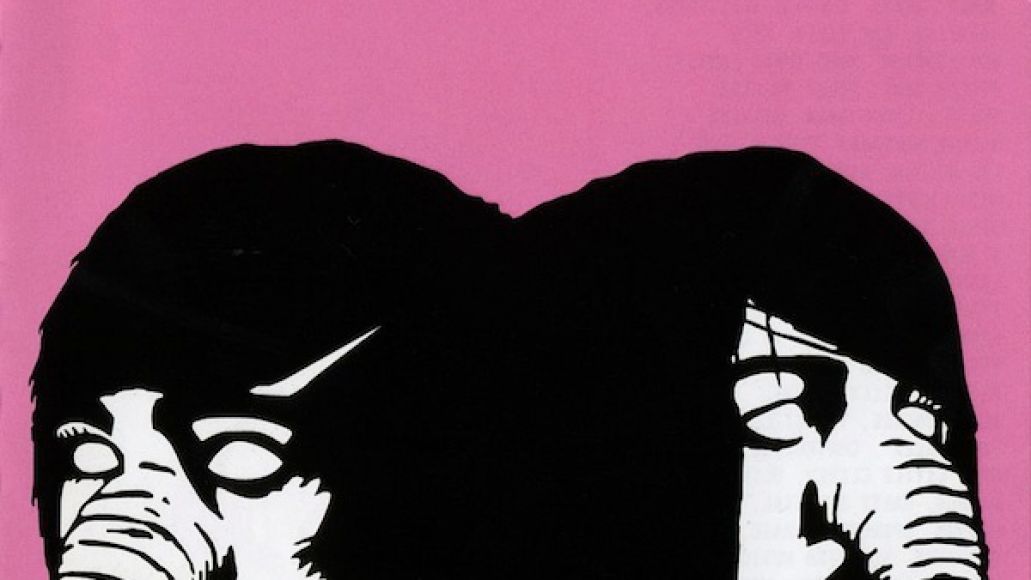 It’s always a marvel to see the end result of any two piece band. When confronted with such a concept, some tend to question, “How much can this band really bring to the forefront?” With this doubt some tend to challenge its brutality for self-relief in knowing that a two-piece band is worthwhile and can be creative. With this challenge at hand, you can’t but help finding yourself knees deep into your record collection, stumbling into such records as White Blood Cells by The White Stripes or The Black Keys’ Attack and Release. You may find yourself scouring further than the backyard garage, confronting other genres and artists, something like, say, Simon and Garfunkel’s Bookends. Odds are, you probably wouldn’t think to pick up Death From Above 1979’s You’re A Woman, I’m A Machine. What a shame, too.

On their only LP to date, Canadian rockers Jesse F. Keeler and Sebastien Grainger snagged some bricks from Phil Spector’s “Wall of Sound”. Understandably that’s a bold assessment, but don’t foam at the mouth just yet. To understand, focus on Keeler’s bass here, what may or may not be the first essential “brick.”  In some respects, it’s the catalyst which directly creates Death From Above 1979’s sound, driving them apart from the traditional two-piece band of restricted material. To give you an idea, for those who haven’t bathed in the wavy sonic mess yet, Keeler’s bass sound tends to mimic the stomp and crawl of an elephant, if only Thomas Dolby managed to feed it through half a dozen distortion pedals. It’s just vicious. This sound hits you at full force, even as early on as opening track, “Turn it Out”. It’s daunting, satisfying, raw, and, above all, batshit crazy fun. You can’t help but have the bass resonate through your cranium hours after listening to a few tracks.

But, if you mention Keeler’s wicked fuzz, you can’t ignore Sebastien’s jaw dropping multi-tasking. Keep in mind, Sebastien takes care of not only the band’s percussion, but the vocals, as well. He’s essentially 75% of the group. Let’s be honest here, you have to be a pretty talented individual if you can match Keeler’s brute force vocally, while also keeping up on the drums. It’s captivating to say the least, even from just a physical standpoint. He plays it with straightforward authority, but there’s an excitement lingering, too – similar to a teen’s first year behind a kit. Nothing glorious, but something pure. (Where does he get those ligaments, you might ask.) It’s safe to say that not many have seen so much come from a man behind a drum set. With that said, let’s go back and focus on Sebastien’s vocals.

Sebastien’s voice is a tough sound to describe. Similar to Keeler, it’s easier to give an imaginative description. Upon listening, it’s easy to think of seduction. Well, not just seduction, but dirty seduction. We’re talking sex dolls and manic drug fiestas. It’s just freakishly impactfing, if that makes any sense. Upon listening to such tracks as “Little Girl”, “Pull Out”, or even “Blood on Our Hands”, it’s easy to come to these conclusions. On “Little Girl”, Sebastien can take “precious” lyrics (“My brother has a lady, oh, and one day she will have a baby”) and turn it into trashy guff. To be blunt, he turns singing into a style. Good enough?

It’s far more important to understand the band than to digress on the songs. To sit here and describe each track on this gold mine of a record would strip it of its value. You have to look at this album as a whole, then take a look at the band, and then marvel at the talent. Yes, the band broke up after one album, a handful of EPs, and a few singles. Yet, would you have wanted it any other way? In a sense, it’s a classic, but a rare one. It’s a standalone album. You can’t draw comparisons from anything else but this. It’s safe to say the fan base would always draw countless comparisons to You’re A Woman, I’m A Machine, even if they were to release a new full-length. That would be unfortunate. That’s not what this album should be. It’s a snapshot. Sometimes it’s better to have that one photo than the whole album. Leave it to Keeler to put it right: “I NEVER WOULD HAVE IMAGINED THAT THE WALL OF NOISE I LOVE SO MUCH COULD HAVE COME THIS FAR.” Agreed.