“We came all the way down here from Oakland today!” -Tajai

There have been many times I have been offered some sort of Hieroglyphics live experience, but was forced to turn them all down for various reasons. Whether it was a Del solo show, or Casual doing an in-store appearance in San Francisco, or the Souls of Mischief (minus one) doing a show in Boston, every time something has come up. Hieroglyphics announced awhile back that they would be doing a West Coast tour (primarily in the Golden State), and they would actually have all eight members. This was a huge deal for me, yet I did not jump forth and get tickets. I now know why.

Earlier this week, via Facebook, the band posted a status saying that they would be playing a free concert at the UC Berkeley campus on February 2nd. They also posted a second reminder that it was free. Naturally, I was stoked, because not only were one of the Bay Area’s finest hip-hop groups performing for free, they were on their home turf, outdoors at the most prestigious university in the entire state (aside from Stanford, but that’s arguable). I figured the East Bay Hiero fan base would be out in full swing, and considering all eight members were there, it wouldn’t be a total loss if I drove two hours north to see it. I’m glad I have good gut instincts.

The show kicked off around 5:30, and in the 30 minutes prior, people seemed awfully confused about what was going on. Numbers of students were skating, biking and moseying around campus asking, “Hey, do you know what’s going on here?” And not having a clue one of hip-hop’s most legendary acts from the area was about to perform. This small tour was actually in support of the new videogame Marvel vs. Capcom 3, so my roommate and I were quite disappointed when we did not see arcade machines littering the Berkeley campus. A sound check (clearly being done by the student union) took place, and moments later, members of the Hieroglyphics crew began to litter the stage. 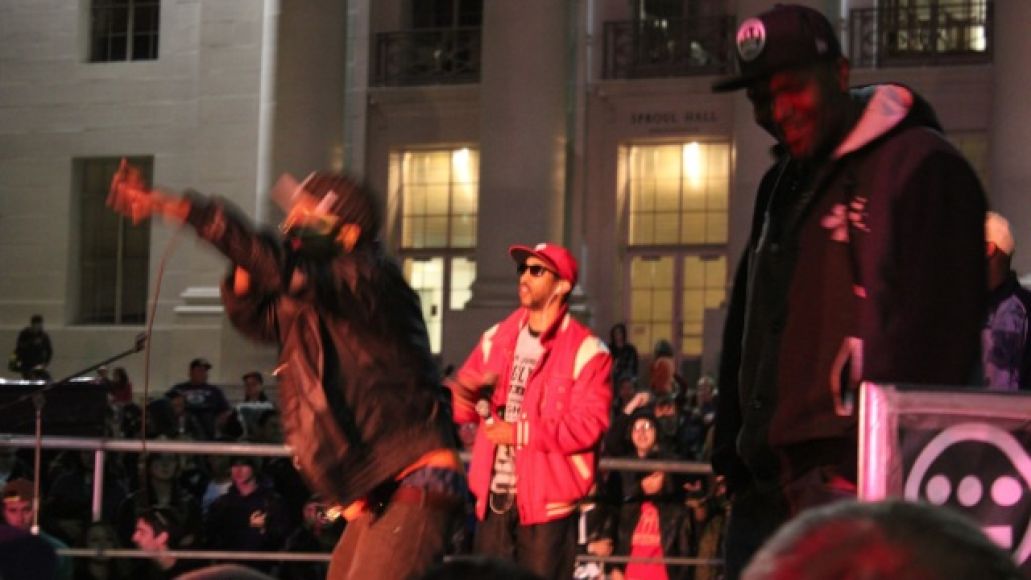 First came Casual and Pep Love, each performing various solo tracks and getting the crowd amped up. The two of them teased the song “At the Helm,” briefly, but then informed us they’d “come back to it.” Next came the Souls of Mischief. All four of them came out on stage, while A-Plus launched into some rhyming with Tajai. And finally, the moment the crowd had clearly been waiting for. “At the Helm” was cued up again and Del the Funky Homosapien entered on the stage, looking more charismatic than ever.

The thing about Hieroglyphics is they pull various tracks out of the catacombs of their careers. There were a number of songs I did not know, and probably a majority of the crowd did now know, as there are some albums they have that are only on cassette! However, numerous key elements were present within their set list. For one, the group did not always just spit a verse, then go into another song, like a majority of hip-hop artists do (most notably Wu-Tang and 50 Cent). The group performed such gems as “After Dark”, which they did as the sun began to go down, and various parts of “Dune Methane”.

The group really went into the vault though on a number of tunes. Del assumed the role of Deltron 3030 (minus Dan the Automator) and performed the indie-rap concoction of “Virus”. To make things even more intense for the crowd, Del even busted out “Clint Eastwood”, of course with a bit of a Funky Homosapien makeover. The Souls of Mischief played their classic 1993 tune, “Never No More”, while Phesto, Tajai and A-Plus did a number of solo tracks as well. Not to mention towards the end, everybody got down on the career highlight “You Never Knew”. 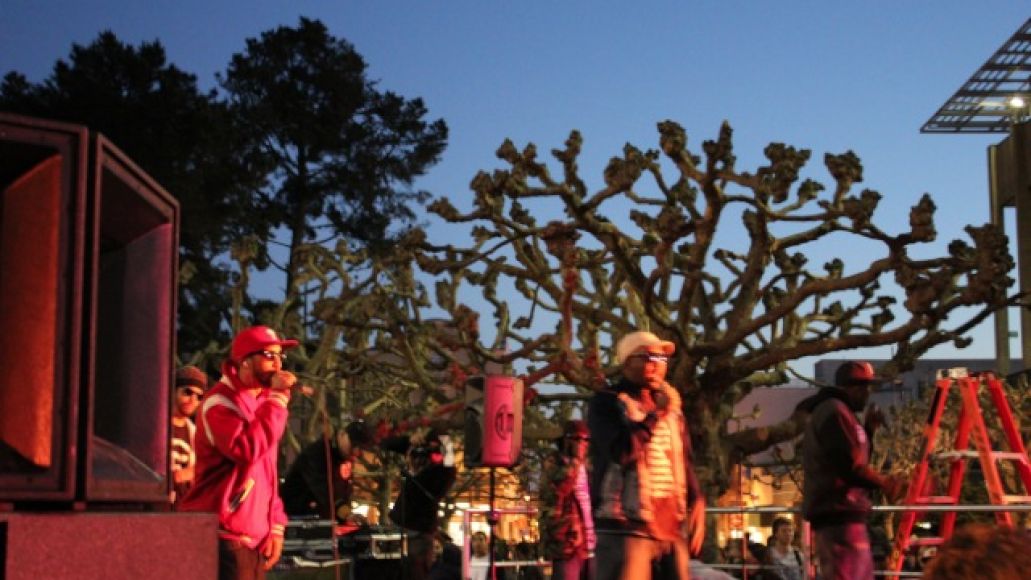 One thing that was so great about this was to see how fresh Hieroglyphics still were after over 20 years of being in the game. The group has always seemed to reign supreme over intellectual hip-hop in the Bay Area. This is not to say that all Bay Area hip-hop isn’t smart, but a number of locals would disagree saying Mac Dre is by far the king of the scene. They even kept their cool in the back when members were not rapping. Rather than shouting “ Yeah! Come on!” constantly while the other members sang, they remained in the background enjoying the groove. But over time, Hieroglyphics have remained unique, fresh, and surprisingly hip to the crowd that follows them. The crew did not come out in gaudy jewelry, big jackets and designer clothing. In fact, they looked more like students at Berkeley. Phesto D sported all Phillies attire, while A-Plus wore a camouflage jacket over a Hiero shirt, and Del rocked an Atari t-shirt accompanied by a Plan B Skateboards cap (the team actually used Hieroglyphics demos in their videos around 1992). It seemed more like they should be having a hilarious themed party rather than touring around the nation.

The crowd really seemed to get into it though. Since the show was free, everybody was in high spirits, giving friends high-fives within the crowd, dancing and of course, smoking tons of marijuana. One such patron held a “cross blunt” up to Tajai, trying to get the MC to hit it. However, the rapper had to turn it down. Things did get sour at one point though, when in between tracks, A-Plus mentioned something about people smelling “funky.” He then accused Del of smelling “funky,” and members of the crowd actually began to boo. But it was explained that this terminology in Africa was a compliment, because if you smelled funky, it meant you were working your ass off. The group seemed fine by this gesture, and shortly after launched into a closer of their single greatest musical achievement, “’93 ‘til Infinity” as the crowd proceeded to bounce, and go ape shit in the name of the Bay Area’s finest MCs. 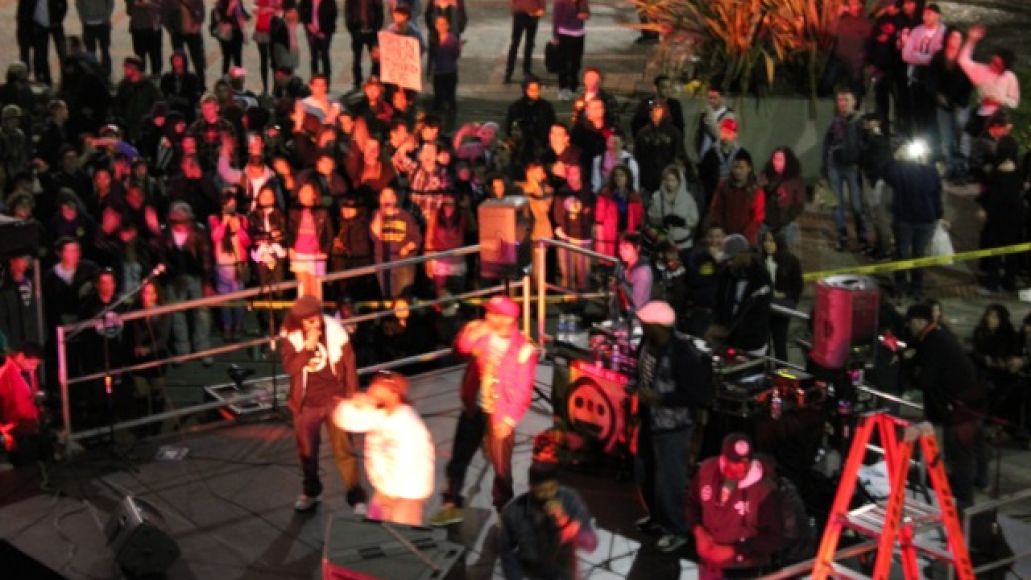 At the end of the show, the group made mention of the fact they have been doing this for over 20 years, which goes to show how much they really stand out in West Coast hip-hop. At the time of their formation, Dr. Dre’s g-funk was going on, while Snoop Dogg and 2pac were both getting massive amounts of airplay. While Souls of Mischief had some success with 93 ‘til Infinity, and Del received some minor airplay, only to be featured on a Gorillaz track years later, the band has still yet to have some mainstream success. Yet today, several fans gathered in front of this small, makeshift stage in the middle of Berkeley’s campus to watch seven of the finest MCs and one fantastic DJ throw down in their hometown. This show easily could have taken place in a club, where we all had to pay vast sums of money, and deal with bathroom and drink lines. Instead, we got it outdoors for free. It’s one Groundhog Day everyone there would not mind repeating for quite some time.

Hieroglyphics! live on the Berkeley Quad! (2/2)