Minimalism is a term that gets thrown around quite a lot in the musical world today. For pop music fans, it can mean anything from a lo-fi drone on a single chord to an ambient track inspired by Brian Eno. It gets used colloquially to talk about a band who has scaled back bombastic studio production on a new album. In the classical music world, minimalism is one of those genre terms that plagues those artists who fall under its umbrella. Minimalism eventually came to signify music built out of repeating gestures, simple snippets of five- or six-note melodies that repeated ad nauseum. And it came to represent an attitude, a kind of D.I.Y. approach to classical music that grew up in the same downtown milieu that gave us Andy Warhol, the Velvet Underground, the New York Dolls, and the Talking Heads.

In what has been heralded as a major victory for contemporary music, the Metropolitan Opera, possibly New York’s most prestigious and pretentious performance company, is currently staging Nixon in China, the 1987 opera by composer John Adams, his first foray into this particular compositional genre. Adams has since had much success with opera: his 1991 The Death of Klinghoffer was made into a movie version that is by far the best representation of any opera committed to film, and his 2005 opera Doctor Atomic was staged a few years later at the Met. Yet many consider Nixon to be one of his finest works, and as the production enjoying its Met premiere this month shows, the music and the topics are as fresh now as they were during the Cold War eighties.

Adams is often called a minimalist, lumped together with Philip Glass, Steve Reich, and LaMonte Young. To be sure, much of Nixon in China is made up of repeated melodies with a strong, propulsive rhythm, such as the thrilling opening chorus centered on the lyric “the people are the heroes now/behemoth pulls the peasant’s plow.” Just calling Adams’ music “minimalist” sells it short. It is maximally rich with resplendent melodies, extremely complex and intricate polyrhythms, and colorful orchestration. Alice Goodman’s masterful libretto documents the historical visit of President Nixon to China to meet with premier Chou En-Lai and Chairman Mao in 1972, but the lyrics are often concerned with fanciful philosophy or inner monologues. Like all great operas, Goodman and Adams use the art form to explore deeper meanings than the action on the surface, turning a curious diplomatic event into a commentary on politics, economics, diplomacy, human rights, and the American identity that has never seemed more appropriate, given our current financial debt with China. 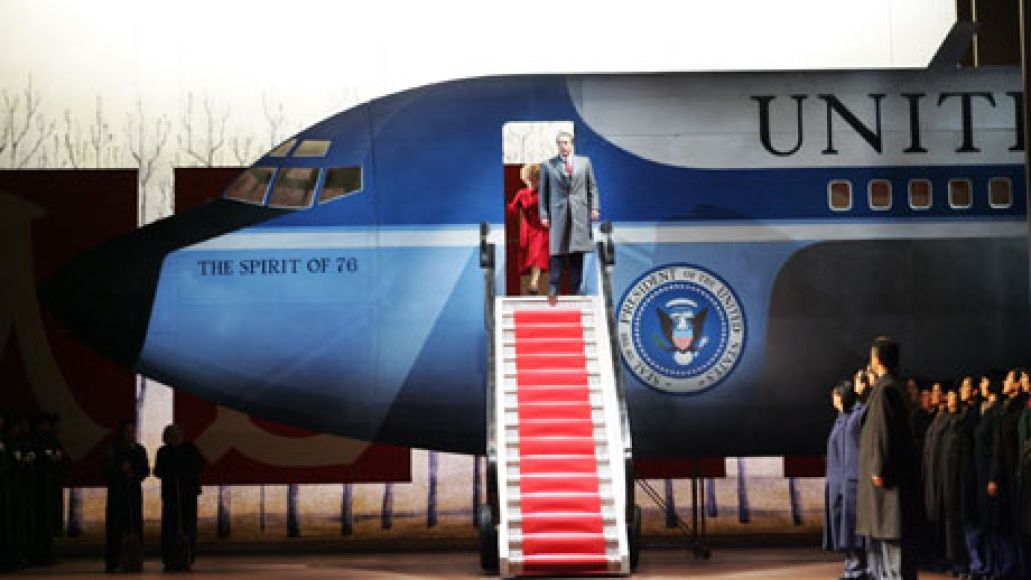 James Maddalena gives a strong performance as President Nixon; his Act I aria “News has a certain kind of mystery” is one of the composer’s favorites. But the real stars of the night were the two female characters: Janis Kelly as Pat Nixon delivers a tremendously beautiful yet melancholy version of her Act II aria “This is prophetic!,” filled with awe and doubt. And Kathleen Kim stole the third act as Madame Mao, her crystalline soprano voice floating above the slow Act III music, although her marquis aria, “I am the wife of Mao Tse-Tung” from Act II, was drowned out by the boisterous orchestra. Adams composed a deceivingly difficult score for Nixon in China, with repeated rhythmic patterns often hiccuping and skipping around, constantly pushing the driving beat to fall in new places with new meters. The Met Orchestra handled them well, although there were a few questionable moments. Still, it’s enough to get your head bopping in a trance.

Downtown minimalism first traveled uptown to Lincoln Center in 1974, in true D.I.Y. fashion, when Philip Glass rented the Met for his opera Einstein on the Beach and sold out the only two performances. Einstein is rebellious and trying to make a point – it suffocates you with its relentlessly repeating synthesized melodies and abstract staging. Adams’ Nixon, on the other hand, is the vanguard to which modern opera can aspire. It is equally convincing both as a part of the rich stage tradition and the contemporary music world. With three more performances this coming Saturday, Tuesday, and next Saturday, you owe it to yourself to discover what 20th-century opera is all about.

John Adams' Nixon in China at the Met Opera