Let’s talk paradigm shifts. It’s like when iTunes gives you whiplash by playing Pantera and Purcell back to back. There’s oceans between a painted black punk club to a bona fide pop show and depending on your mood and current paradigm, you might be in for some music whiplash. So to enter The Riviera amid a sold out Robyn show, I had to make quick work of any lingering snark and cynicism that usually trails behind me like Pigpen. What would normally spur me on at an indie rock show was in complete dissonance here.

The rescheduled sold-out show, now taking place on Valentine’s Day, was the place to be if you had a heart, empty or full. There was no room (literally) for anyone coming to judge her and see if she lived up to the hype. The hype was in the room, hovering above the salty Burberry miasma, tight-fitting v-necks, and groomed eyebrows. The crowd was there to love Robyn, and vice versa.

UK Pop vixen Natalia Kills opened the show bookended by two equally sultry and bobbed dancers. To circumstances beyond my control, I missed a lot of her set, but caught her last song, her new single “Mirrors“. Half for the catwalk, half for the club, Kills has the makings of an electro pop star by aesthetic alone. Fledgling idols are doomed to earn their keep sans spectacle, and Kills held her own with energy and no small amount of sex appeal. Follow her here, as she may be dancing down the paved road towards stardom.

Let’s talk paradigm shifts again. I’ve been listening to Diamond Rings’ album Special Affections for a while, and in my head this was Interpol mixed with Depeche Mode with a full band and dour 3 a.m. cocaine energy. (I think I tried to do some cursory research, but they truly have another un-Googleable band name and I probably just gave up). Whiplash again. Toronto born John O. is all of Diamond Rings — from image to to sound. The visually brilliant man, armed with synth, laptop, guitar, and a velvet baritone, was a one-man show. Dovetailing on Kills’ sex appeal and choreography, John O. moved through his catalog trying to fill the 2,500 capacity. “On Our Own”, his closest thing to a synth-pop song for a crowd fucking pining for Robyn to come out, dissipated against the oft-inattentive crowd. His control of his music and style was outstanding and clear as he lead with his dark-disco foot and followed with his synth-pop foot. The drunken swirl of a smaller club would surely have succumbed to Diamond Rings’ siren call, and while Diamond Rings commanded the Riviera stage, he was conquered by the Riviera venue. 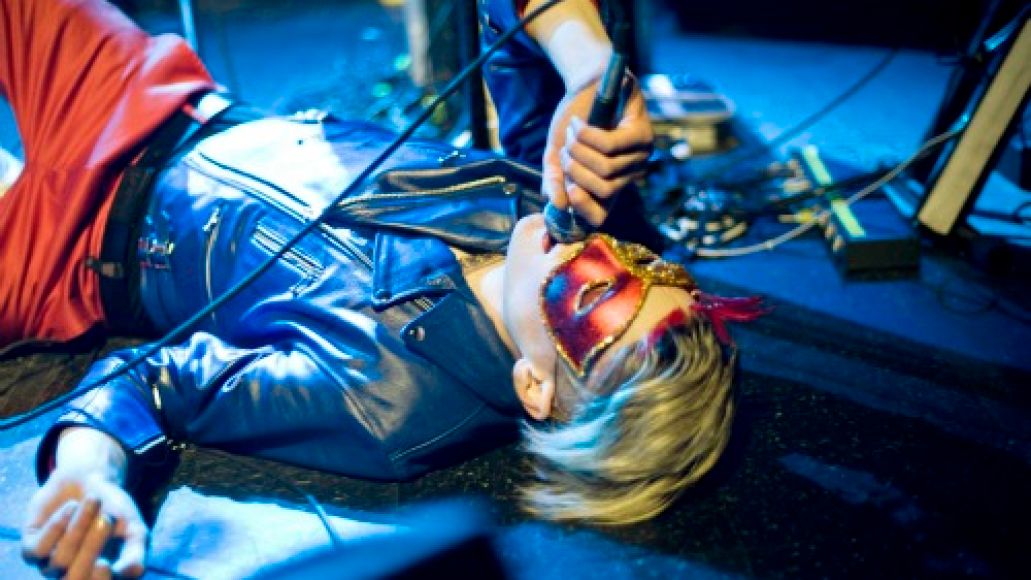 Robyn commanded and conquered. The Swedish Idol took the stage with her alabaster backing band and the crowds’ anticipation boiled over with a roar and the oh-so-unfortunate smartphone salute. “Time Machine” opened the set and elated the crowd (myself included, ’cause the song mentions a Delorean!). Robyn has years under her belt as a pop star which endows her with multitudes of genuine emotions. Her icy stare and furrowed brow, her sun-salutations and aerobics, her ear-to-ear grins and cheerleading — all fit snugly against her brand of pop. And that brand is unanimously welcoming, as evidenced by my snark and cynicsm pounding on the doors of The Riv begging to take part in this concert. Sorry, pals.

The show had few breaks for Robyn and the crowd to catch their breaths as the band mixed one song right to the next. Fan favorite “Dancing On My Own” came surprisingly early in the set and reminded me that Robyn truly has a top-shelf pop voice. The clarion call “I’m giving it my all/but I’m not the girl you’re taking home” evinced the crown on her head: The True Queen of Pop . 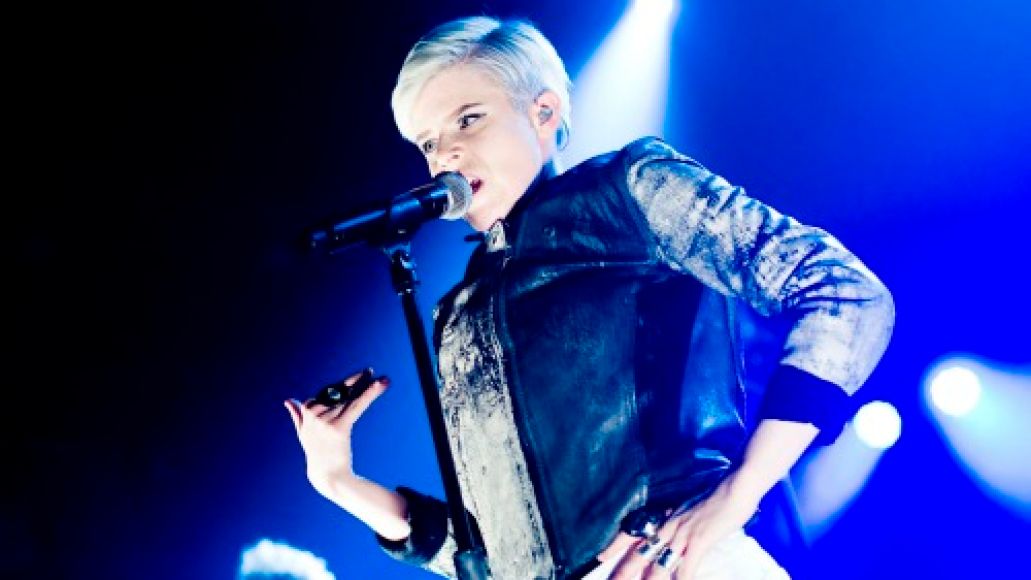 Though only backing, the band hardly played second fiddle. Pop requires nothing less then precision and the band fulfilled the music’s necessity for energy and drive all while adding organic touches akin to a Talking Heads concert. The remixes of “We Dance To The Beat/Don’t Fucking Tell Me What To Do” put the two percussionists and two synth players on display as they molded the two songs into something fresh, organic, and entirely danceable.

The double encore (!) set was a workout, and at times reminded me why I don’t really hit up bottle service at clubs. But it was hard not to open your heart to Robyn as she opened up her entire life’s career to the crowd, culminating with her former calling card “Show Me Love”. Robyn never pushed any of the usual corporate pop agendas in our faces. The show was most sexy without her being half-naked, she grandstands and it never feels like she’s begging for it, and it’s a perfect balance of enjoyable pop and a strong female voice with agency who should be a ubiquitous idol to youth of today — who are searching in all the wrong places. As the crowd lifted their hands to form hearts for Robyn, Robyn did the same. Few things ever feel more sincere on Valentine’s Day.

Setlist:
Time Machine
Fembot
Cobrastyle
Dancing On My Own
We Dance To The Beat/Don’t Fucking Tell Me What To Do (Remix)
Love Kills
The Girl and the Robot
Indestructible
Call Your Girlfriend
Stars 4-Ever
Encore 1:
Get Myself Together
Dancehall Queen
Hang With Me
With Every Heartbeat
Encore 2:
U Should Know Better
Konichiwa Bitches
Dancing Queen (sample)
Show Me Love