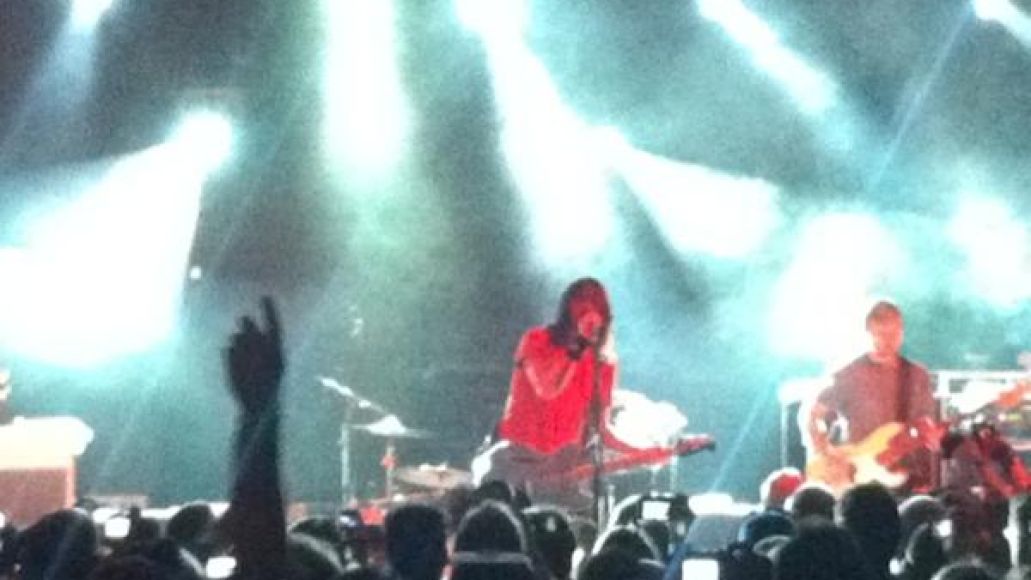 The question: why should a band as big as Foo Fighters play South by Southwest? The two-part answer: because 1.) they provide what is perhaps the best modern day example of a band made good (and thus what the 1,000+ buzzyworthy acts should strive to be) and 2.) even music’s biggest band needs a place to showcase their new jams.

And so there we were — 2,500 of us, who Dave Grohl so aptly described as “industry motherfuckers and nerds” — watching the band hammer through their forthcoming 7th LP, Wasting Light, in its entirety before moving on to “their massive hits” (yes, that’s another Grohl quote). The whole thing was a night for the ages, especially if you take into account the context: it was a “semi surprise” show at the 2,500-capacity Stubb’s that everyone seemed to know about by 5pm CST yet which was billed as a “closing party” for SXSW’s interactive badge holders only. Thus, the 1,000+ music badge holders, many of who stood in line for over two hours, were, well, shit out of luck. A bit of chaos ensued, which was further realized by the SXSW staff member who was made no attempt to hide the frustration he shouted into his microphone — I believe the quote went something like “we don’t have the manpower to handle this.”

Here in lies the undeniable star power that still bestows Dave Grohl’s outfit. It’s cool to say the Foo Fighters suck, they’re over the hill, etc., but fads/trends/hip factor seem to be immediately thrown out the window when one is given the opportunity to see a band in their stature at a venue of that size. Few bands can make such a claim, which is why the Foo Fighters are all that more special. Even after 16 years and seven studio albums, they remain a spectacle worth seeing, a group with a collection of hits that warrant their own karaoke video game and whose onstage prowess brings reminders of Springsteen’s E Street rockers (especially during “Stacked Actors”).

Plus, they’re able to stay fresh. Wasting Light, due for release April 12th via RCA, may very well prove to be an instant classic; clocking in at just under 48 minutes, the 11-track effort is one uppercut after another, mixing an overall heavier sound and some Dave Grohl screams with more of the band’s trademark hooks. It’s rock and roll music at it’s best — catchy, powerful, and worthy of a fucking head nod.

Nothing about their Tuesday night performance at Stubb’s was particularly unique. Much like their recent residency in LA, the band played Wasting Light straight through before tackling eight of their greatest hits, which included “My Hero”, “Monkeywrench”, and “Everlong”. But for a band whose seen successes at its highest points and then some, a by-the-book Foo Fighters performance is what the thousands of acts who will descend Austin this week can only dream of. As Grohl sarcastically exclaimed near the end of the band’s 90-minute set, “You guys done yet? No? But there are so many other hot new acts to go see tonight.” The crowd responded with a rousing “no,” knowing full this would be the best thing they’d get all week.

Setlist:
Bridge Burning
Rope
Dear Rosemary
White Limo
Arlandria
These Days
Back & Forth
A Matter of Time
Miss the Misery
I Should Have Known
Walk
All My Life
Times Like These
My Hero
Learn to Fly
The Pretender
Stacked Actors
Monkeywrench
Everlong
Best of You
This is a Call