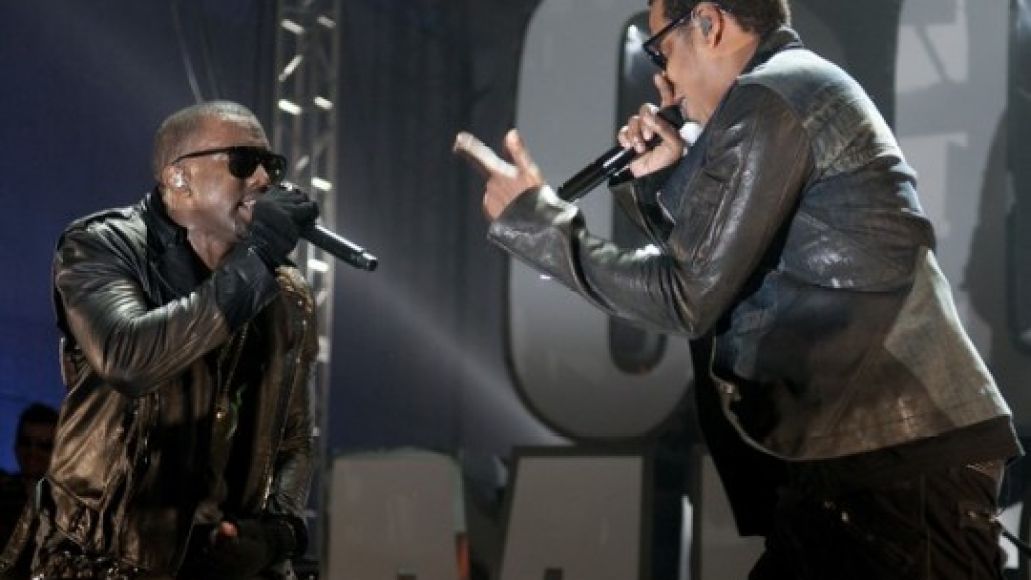 At 10:30 p.m. Saturday night, the scene at the VEVO Powerstation was one of absolute pandemonium. The factory turned corporate-sponsored music venue was lit like a fortress; the giant power stacks formed a canvass for the bright white letters that spelled VEVO, while Chevrolet luxury vehicles filled out the landscape. Yet behind the complex’s makeshift gates was a crowd of a thousand,  er.. sheep, all of who threw their VIP all access cards at the equally bewildered security guards to no avail. There were two lines for VIP, one maybe for press, and a giant clusterfuck/circle where everyone who knew someone or who had been lucky enough to actually earn entry through that 10-part text message saga sat and wait.

Ironically, at least by Kanye @ Bonnaroo standards, the scene outside was not a prelude to the actual event. The first sign that West’s semi-surprise concert would be heavily scripted, choreographed, and rehearsed came at 1:30 a.m., when all members of the G.O.O.D. Music label not named Kanye lined up in front of a giant fixture reading G.O.O.D. Music with masks covering their faces. Mos Def, one of the label’s most recent signees, served as the initial hype man, with Pusha T, Big Sean, Cyhi da Prynce, Mr Hudson, and Kid Cudi all following in toe, each taking 10 minutes to showcase their beats and rhymes. We were at South by Southwest after all.

An hour later, it was West’s turn. The 90-minute set focused mostly on material off My Beautiful Dark Twisted Fantasy and the G.O.O.D. Friday offerings, with the Justin Vernon-aided “Dark Fantasy”, “Gorgeous”, and “Hell of a Life” kicking things off. The Graduation classic “Can’t Tell Me Nothing” followed before John Legend joined West for renditions of “Christian Dior Denim Flow” and a simplified version of “Blame Game”.

The script really got going after this. John Legend dished out an extraordinary version of “Ordinary People”, while West took five minutes for a costume changed. After trading in his leather for red, Yeezy returned for heavily auto-tuned versions of “Power” and “Runaway”. Not surprisingly, both performances were absolutely spectacular; West raised the hype even further with a false start on “Power” which saw him leave the stage only to return once the crowd was in a full fledged panic, while just one single piano stroke off “Runaway” prompted an equally exhilarating reaction. However, musical creativity soon took the place of showmanship as West gave both songs extended closers with loads of autotune and reverb. Per the below video, “Runaway” clocked in at over eight minutes by the time West exhausted every possible way to sing “Runaway” with funky echo effects.

Finally, the climax. After closing out the main portion of his set with “All of the Lights” aided by a marching band (Kanye totally maestro’ed out, btw), he returned on stage with a super, non-G.O.O.D. Music special guest — Jay-Z. Only Jay’s appearance was more a showcase of sorts rather than a “hey, Ye, I’m checking out Lil B at Fader Fort, mind if I pop by later”-type of deal. Clearly rehearsed and incredibly well polished, rap’s two biggest MCs dished out a five-song set that included the live debut of Watch the Throne‘s lead single, “H.A.M.”, “Monster”, and “So Appalled”, along “PSA” and “Big Pimpin’”. There was also an attempt at “Swagga Like Us”, but Kanye cut it mid-way through after forgetting his verse, resulting in what was easily the most charming moment of the evening.

That would have been enough right there, but West and friends gave one more taste of G.O.O.D. Music in the second encore. Vernon assisted West for a rendition of “Lost in the World” before the entire family came out to provide back-up on “Good Life”.

And, well, that was the scene. There was no ranting against MTV, anti-Grammy freestyles, or threats of retirement. Instead, West let his talents and those of the men signed to his label take center stage, and in the end, VEVO’s super exclusive close-out party at a factory turned music venue with a capacity of 4,000 and an open bar offering vodka and an array of juices came off as much of a showcase as what Odd Future was doing down the street. Now, let’s just get Jay-Z signed up and make it a tour. 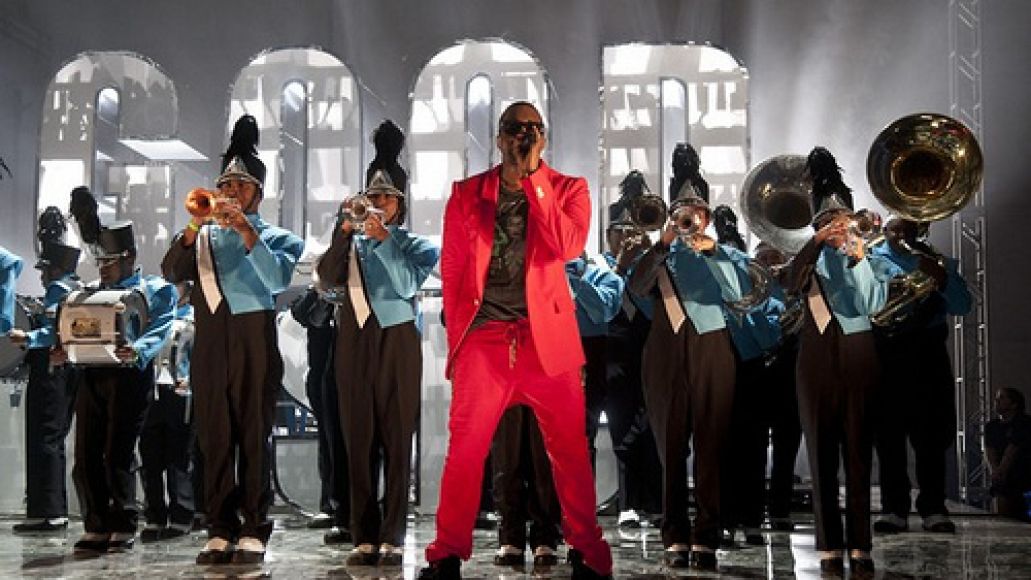 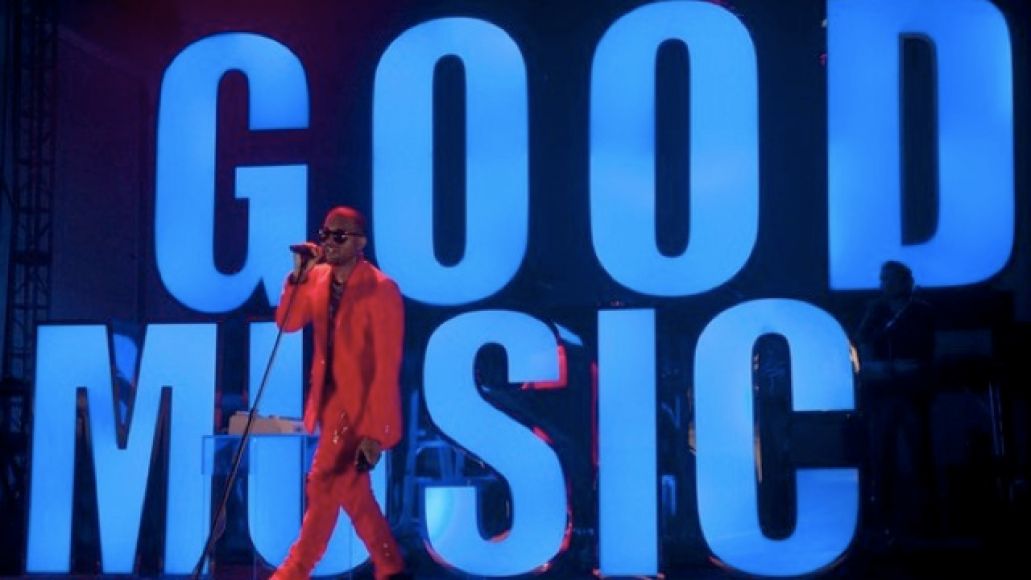 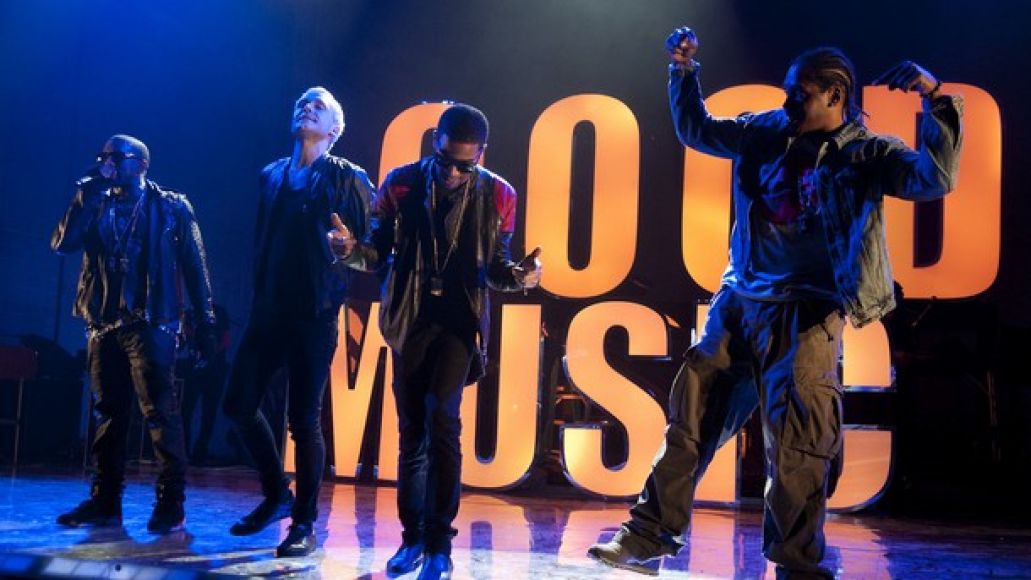 For those who missed it, the concert will be available for on-demand viewing across the VEVO platform on April 22nd.