The first time I saw the legendary video game composer Nobuo Uematsu in person was about a year ago. A group called Video Game Orchestra was putting on a performance at 2010’s Anime Boston, an anime convention up north. Being an enormous fan of video game music, I checked my schedule, crossed off some panels, and made time for going there. The concert was incredible; seeing songs that have been in games so dear to my heart being placed by a live orchestra was a feeling unlike any other. As the performance drew to a close, they announced that their finale would be a medley from one of the most popular games of all time, Final Fantasy VII. Cue mass cheering. Oh, and they would have a surprise at the end. The surprise came in the form of the Final Fantasy god of music, Nobuo Uematsu himself, joining in their performance of “One Winged Angel”. You know how Beatles fangirls used to be when the band first got big? That was my friend and I, jumping up and down and shrieking in excitement, uncomfortable costumes be damned. It was a moment I will never forget.

For the last three years, the tunes of the Final Fantasy series has been brought to performance halls in the form of the concert tour Distant Worlds: Music from Final Fantasy. Conducted by Arnie Roth, the tour has made its way throughout not only Japan, but the entire world. When I first heard about these, I was ecstatic; I had grown up on Final Fantasy and its music. Seeing it performed live would be a dream. After long years of waiting and jealousy over other friends who got to see it, the tour finally made its way here to New York City. 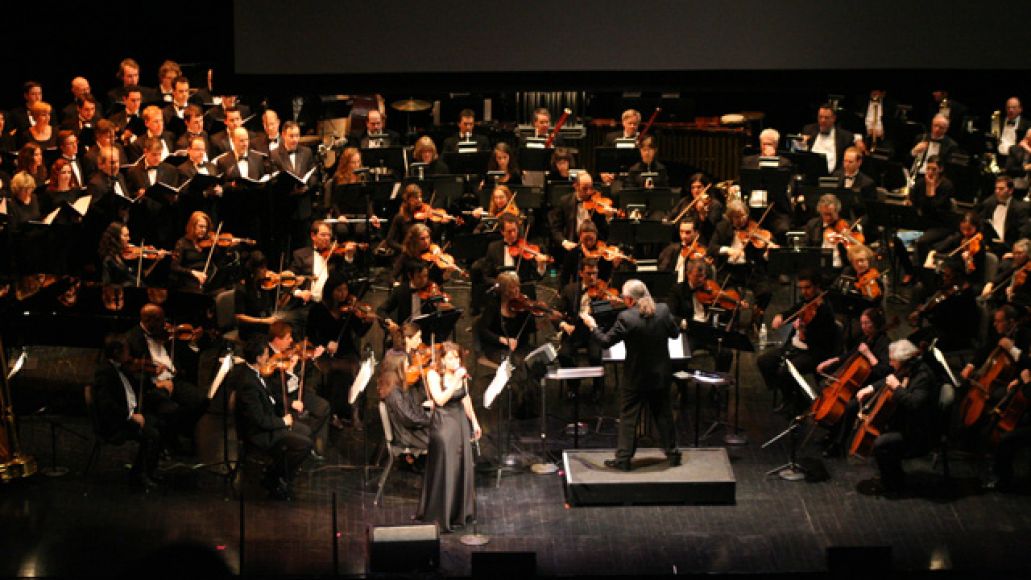 Once the orchestra finished tuning up, they began the night appropriately with the traditional “Prelude”, heard in most of the series’ games. The gentle sounds of the harp were about to be replaced with a much more powerful song: “Liberi Fatali”, the opening theme of FFVIII. Accompanied by the Riverside Choral Society, it set the mood for the night, which could only be described in one simple word: epic. To add to the atmosphere, a large screen hung above the stage, in which scenes from respective games would play during the music. Kicking off with FFVIII‘s opening scene (which, despite the quality of the rest of the game, is pretty damn awesome) was just about perfect.

After another FFVIII song, it was time to bring out the solos. Vocalist Susan Calloway stepped onto the stage to perform FFXI‘s “Memoro de la Stono – Distant Worlds”. Her haunting and angelic vocals carried the gentle yet dramatic song all the way through. She soon returned to the stage three songs later to perform FFX‘s sweeping full orchestrated version of its theme “Suteki da Ne”. What intrigued me was that it wasn’t quite what I was used to hearing. Even in the English release of the game, “Suteki da Ne” remained in its original Japanese. In this concert, however, it was translated into English. Despite the change, the translation worked well enough, though it was awkward to leave the title phrase in as it was originally; Calloway’s vocals are gorgeous, but her pronunciation of Japanese leaves, er, a little to be desired. 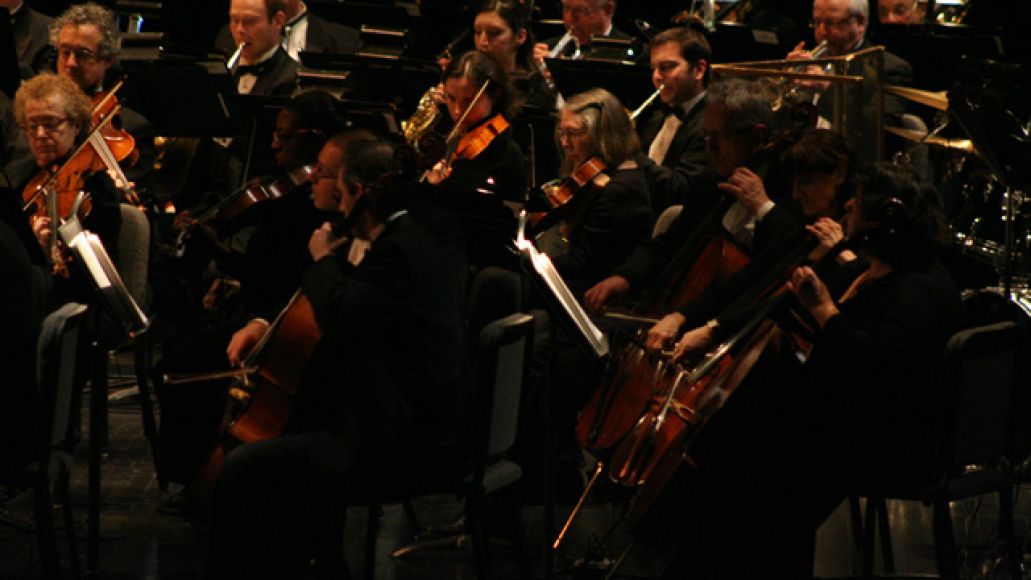 Of course, what is the FF series without its most popular mascot, chocobos? It was time for the celebration of these fluffy yellow birds. To start it off, the most recent incarnation of the chocobo theme was played: XIV‘s. It seemed a little odd, granted, and new to our ears despite the familiar melody, for the simple fact that they haven’t even gotten around to putting chocobo riding in the game yet–but I digress on that disaster of a game. To finish off happy bird funtimes was “Swing de Chocobo”, a big-band version of FFX‘s incarnation of the theme, which players may recall tearing their hair out to while trying to get main character Tidus’ ultimate weapon. Sadistic game, I swear.

It wasn’t until after the intermission that the first song was played from the series’ most popular game, FFVII. “Opening ~ Bombing Mission” drew plenty of cheers from fans who were waiting to hear the game’s material. After a few more numbers, including an emotional piano-driven “To Zanarkand” (FFX) and a fierce, bombastic “J-E-N-O-V-A” (FFVII), a new song was performed for the first time here in America. “Answers”, which is the main theme of FFXIV, may just be one of the most layered, sweeping songs that Uematsu has ever written. The orchestra was once again accompanied by the chorus and Calloway, and the breathtaking piece is undoubtedly the one shining thing FFXIV has going for it. 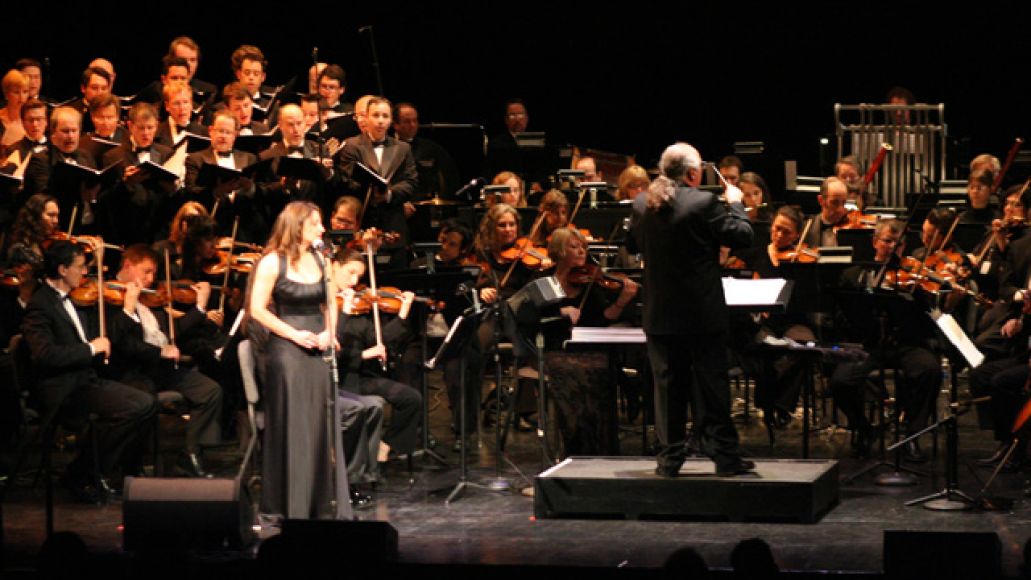 After FFVI‘s “Terra’s Theme”, a simple yet memorable melody richened by full orchestrations (which cleverly used the video screen to show ending credits for the concert in the same exact style of FFVI‘s opening credits), fans weren’t completely satisfied just yet. There was one song missing. One song that was yet to be done, that everyone was waiting for: the iconic “One Winged Angel” from FFVII. Uematsu himself came onto the stage and joined the chorus for this encore, the tense and spiraling strings and horns being that from the original rather than the more heavy-metal inspired Advent Children version. There’s no possible other way that a Final Fantasy concert could be ended.

The only truly disappointing part of it all was that it just didn’t feel complete enough, even at two and a half hours. The music of FFIX–my personal favorite of the series–wasn’t featured at all, for example. However, it turns out there’s another show the night after, which will use a slightly different set list, so that the games neglected at this particular performance will get their time to shine. Ultimately, however, Distant Worlds was an incredible tribute to some of the best music in the gaming world. Insert victory theme here. Level up.