Today’s music industry is sick (sick, sick). With Auto-tuned, underprivileged teens soaring up the music charts and manufactured pop bands storming the airwaves, the scene is hanging on by a thread with nary a hint of credibility to be found anywhere. It’s suffering from depression and over-saturation, of “products” that, in the end, are faceless, voiceless, and dull. I’ve found a cure though; one that pounds away fears with merciless drum beats and injects grinding guitar hooks like a shot in the arm.

The cure is none other than stoner/garage/psychedelic rock outfit Queens of the Stone Age, administered by their ginger-coifed head doctor and jack-of-all-trades, Josh Homme. Monday’s sold-out show at Oakland’s gorgeously re-vamped Fox Theatre was the setting for anyone who wanted a good kick in the pants by way of the band’s quintessential churning guitars and throttling basslines. And even if the band couldn’t deliver on that promise, the rowdy crowd seemed ready to do it themselves, at least judging by the clouds of pot smoke that would puff up in the air every five minutes, rivaling Homme’s own onstage smoking habit. Of course, Homme was also swigging from a bottle of vodka during the show, so he wins that round for biggest badass in the room.

Queens of the Stone Age were out touring in support of their re-released self-titled album, playing the record in its entirety (more or less), allowing some fans the chance to hear the effort for the first time live. It’s also one of the first tours the band has done since their 2007 release, Era Vulgaris. Needless to say, fans were chomping at the bit to get an audio assault from these guys in any way, shape, or form. 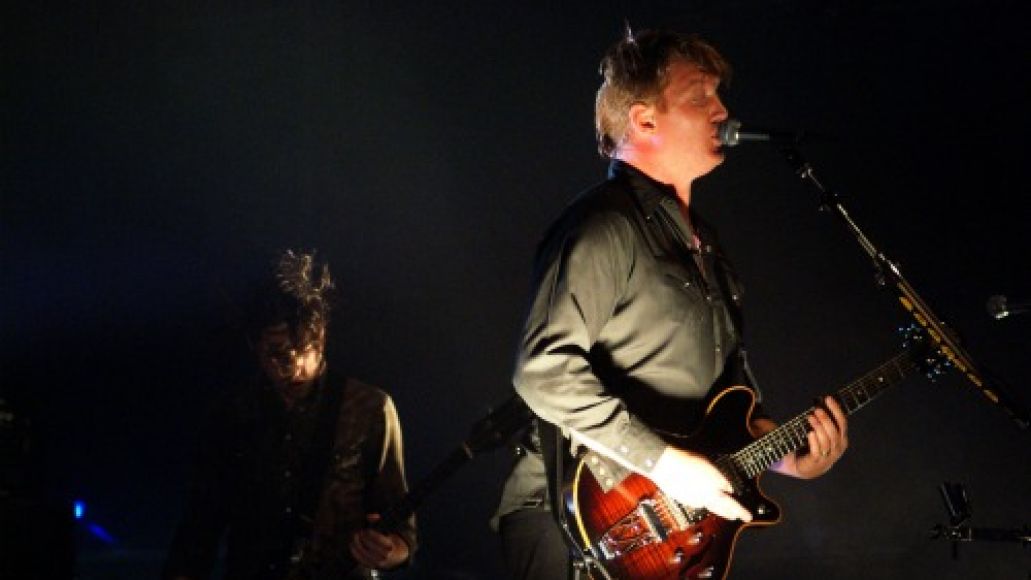 The band too seemed just as eager to be out there and playing again. Homme was ever the grateful gentleman, making sure the crowd was feeling OK, egging them on when they needed it (“Fuck what the security says. This is Queens of the Stone Age, you can do whatever you want”) and keeping them involved (“I wish you could see what you all look like from up here, you’re all beautiful”). And despite all band members always having their hands busy in various side projects from Them Crooked Vultures to Mini Mansions to Hello=Fire, they all gelled well together onstage, moving back and forth between each other like synchronized swimmers. Mikey Shuman was a delight to watch on bass, as was the enigmatic Troy Van Leeuwan, and the multi-talented Dean Feritita, who handled both guitar and keyboard duties with ease. And drummer Joey Castillo is a tireless machine, among other things.

Having never been to any of their shows when the self-titled album came out, I can’t say for certain, but to me it felt like the material felt just a fresh as it would have back in 1998. It sounded rich, layered, and all sorts of rock and roll. While “Regular John”, “Avon”, and “If Only” came out of the gate in a straight-to-the-point gallop, the band didn’t really hit their gritty stride until the heady “You Would Know”. Everything after that took no prisoners, such as the rollicking, dizzying-guitar display of “The Bronze” (a bonus track on the re-release that’s an actual real bonus) and the chug-a-chug drums of “How to Handle a Rope” (which followed Homme’s dry word’s on the Judas Priest suicide controversy). The real impact of the show didn’t hit home for me until “Mexicola”. The song is great on the album, but live it took me by surprise. And by surprise, I mean it jostled my organs around by the sheer force of their instruments. It was a full-on sneak attack by grinding bass and the subsequent sledgehammer of pounding drums and knee-shaking riffs upon riffs. 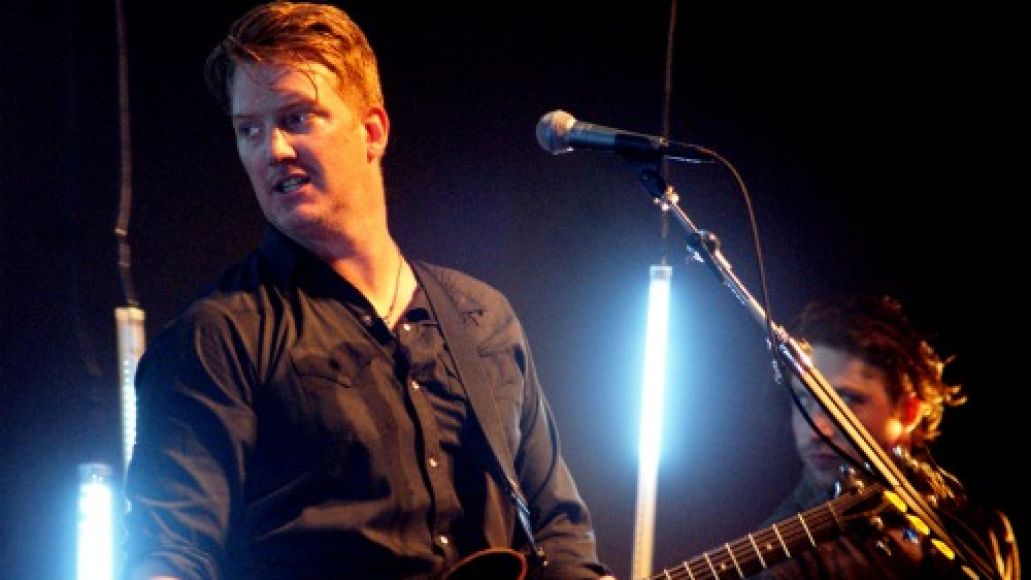 It wasn’t all about how loud they could play or how badly they could make the fillings in your mouth rattle around – part of QOTSA’s draw is the band’s ability to explore different sounds and tease different genres. “You Can’t Quit Me Baby” and the second encore of “Better Living by Chemistry”, are two of the band’s most well-written songs that showcases their melodic stoner/psychedelic slant. Both were transcendent live, sounding just as good, or better, than the album versions.

And as seen with the aforementioned song “Better Living”, the encores consisted of songs that represented all of their other albums. Those fans who were there to hear other stuff from Rated R got “a disco song about LSD”, i.e. “Monsters in the Parasol”, while people wanting to hear Songs for the Deaf had their faces blown-off by the epic closer, “Song for the Dead”.

Now, I’d like to say the show was perfect, but unfortunately it wasn’t. From my vantage point (at the front rail to the left of the photo pit), the sound was good. I could hear everything that I was supposed to: Homme’s voice was dead-on and the audio was just bone-rattling enough to make me feel it. But it seems that the rest of the audience wasn’t so lucky. I heard varying reports from the sound being “not great” to being atrocious, depending on where you were standing. When you have a band that works so beautifully on the balance of sludgy, booming beats and delicate, harmonious vocals, it’s a damn shame if you can’t hear one or the other. Plus with the way Homme was backlit, the back of the crowd’s show consisted of a giant, swaggering silhouette and instrumentals. Not exactly what Queens of the Stone Age is all about. The band probably had no idea about the sound problems, so it’s no fault to them, but I know some people who would like to give the sound guy a kick in the pants. 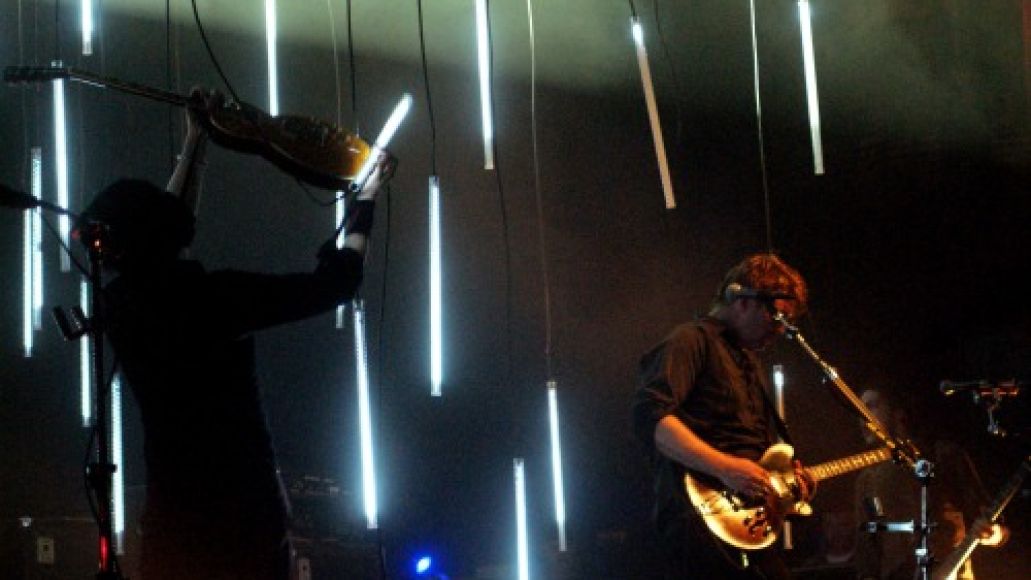 Setlist:
Regular John,
Avon
If Only
Walkin’ on the Sidewalks
You Would Know
How to Handle a Rope
Mexicola
Hispanic Impressions
The Bronze
Give the Mule What He Wants
I Was a Teenage Hand Model
You Can’t Quit Me Baby
Encore
Monsters in the Parasol
Burn the Witch
Make it Wit Chu
Little Sister
Encore Two
Better Living Through Chemistry
Go With the Flow
A Song for the Dead
——

Live Review: Queens of the Stone Age in Oakland (4/11)