This was my first time seeing The Mountain Goats, which may sound a bit dissonant. There’s no real great reason I’ve never seen them (same reason I haven’t seen Heat yet, I know!), it’s simply circumstantial happenings that brought me to my inaugural John Darnielle show only last night at The Vic in Chicago. Due diligence was paid and enjoyed ahead of the concert, having dug Darnielle’s extensive repertoire for years. Now, live in front of an eager crowd, the songs flexed and breathed in new ways — all while maintaining vim and positivity. If you captured a mason jar full of energy in the room, it would charge the hearts of a thousand depressive souls — or three Logan Square tragedians, as the ratio works out.

Openers Megafaun unpacked the first part of the evening splendidly. This Eau Claire, WI by way of Durham County, NC trio set up camp and crackled with just the right amount of blues and Americana. “They seem like brothers or best friends just loving it out on stage”, I scribbled, just before Phil Cook introduced the other guitarist as his brother Brad Cook, and the drummer as their best friend since middle school Joe Westerlund. Gotcha. 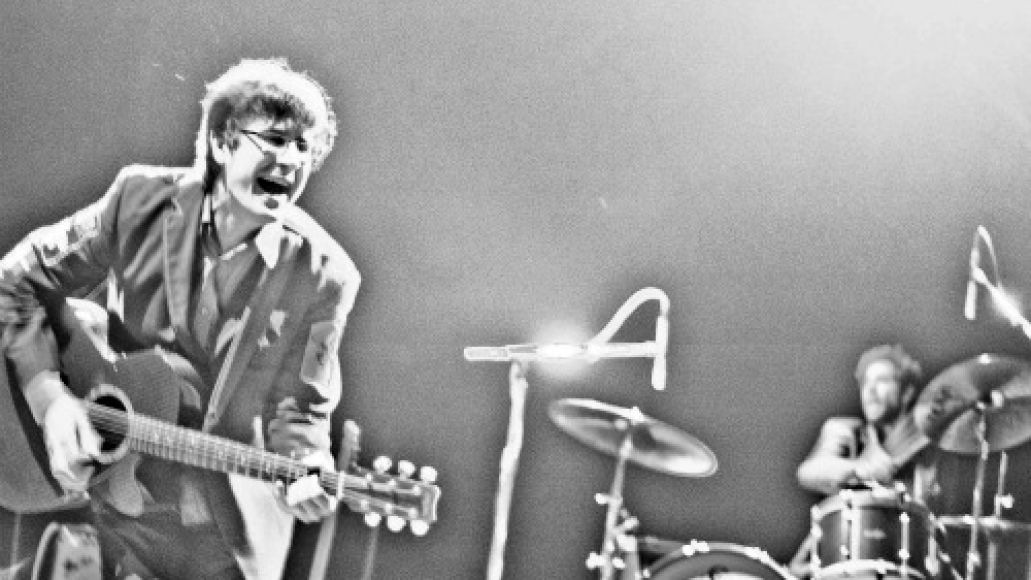 The band’s joie de vivre and lighthearted attitude was impossible not to co-opt tapping along to their homestyle country-blues. At one point, the three huddled around one mic for the quiet bluegrass jam “Worried Mind” and led the whole crowd in a hushed all-white unison gospel sing-along — we sounded OK. And even though there’s a southern melancholic underpinning to their songs, their comforting ditties came off as affirmations of the true soul of music: erm, something about loving bonds and the simple life… et cetera. Either way, they closed with now a four-part audience sing-along a la Roy Orbison (or Ben Folds, I guess) which put everyone in highest of spirits. For all their self-effacement (“We’re a step above a jukebox being a supporting band,” Phil mused), the good ol’ boys were wholly engaging because they were wholly in love with their music in the least self-indulgent way possible.

This couldn’t have dovetailed any better into The Mountain Goats. Darnielle, Jon Wurster on drums, Peter Hughes on bass, and touring keyboardist and strings arranger for All Eternals Deck Yuvol Semo bounded onstage and opened with their ultimate song in their catalog, “Liza Forever Minelli” with Darnielle sans guitar front and center. The band locked into the syncopated song and began their hour-long tour of their discography, with only a slight special on their latest. 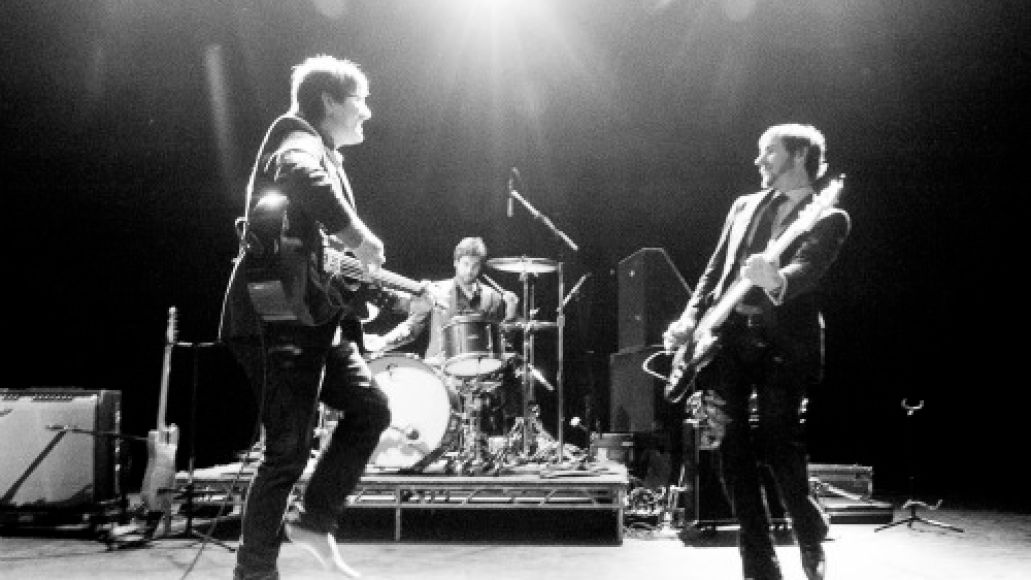 There appeared to be two types of Darnielle performances: songs about life he’s conquered, and songs about demons he’s still reconciling. In “Broom People”, his smile beamed throughout, and the band chugged the waltzy tune along, beefed up by Hughes’ heavy picking on his bass. It was here again I noticed that the contagion of joy can be the single best thing about a concert, especially if it comes from an real place. Conversely, Darnielle wrestled with himself on “Family Happiness”, removed his glasses to headbang for a few seconds, ran around the stage, and then as if there was no other option in the entire world, played the final strains of the song on the keyboard. Darnielle’s range as a performer engaged me even more — even if he is just a seasoned actor after all these years on stage.

Darnielle then came out alone to play some of his band-less tunes such as the lovable romp through high-school bullying one-off “You Were Cool”, or the beautiful new ballad “Outer Scorpion Squadron” accompanied by Semo on the keys. Hearing his words live, unencumbered, just as raw as it was on the early demos was a treat. What I always imagined was Darnielle’s true intent with his early lo-fi recordings was achieved through just hearing just him, standing alone on stage. Not to be presumptuous, but this setting was perfect time to hear older tracks “Song for Dana Plato” and the soupy-meditation “Seeing Daylight”, which was augmented with Wurster’s sparse and attentive trad-drumming. 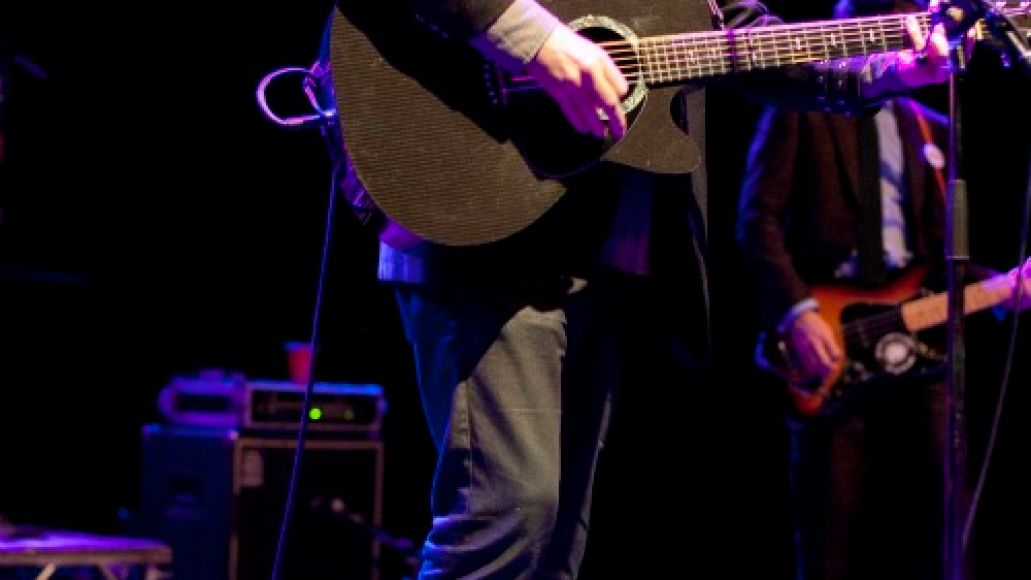 The band re-entered, and jammed for a brief while longer. They pulled up songs from all sorts of records and played the hell out of them as we all sang along (including their cover of Silkworm’s “Plain” with an appearance by Tim Midgett, the lead singer of Silkworm!). Unfortunately, The Vic had set a curfew for 9:30 p.m. — unbeknownst or at least unadvertised to the public — giving The Mountain Goats one hour for their 20-song set. The banter was minimal, the pace was deliberate, the performances were unbelievable, but I felt grifted on the set-length, especially after downloading their set at the Bowery Ballroom (now with 45 minutes extra minutes of songs and banter!).

But as the final encore began, with all of The Mountain Goats and Megafaun onstage for the grand finale of “This Year”, there really wasn’t more I could ask from for my first show. I’m sure there were many Capricorns there, out for their fifth or sixth outing with Darnielle, but I can’t imagine this not measuring up to or exceeding a performance in the band’s past. Chalk that up to their professionalism and love for what they do, which hopefully will propel them into the future — when I’m at my fifth or sixth show.

Setlist:
Liza Forever Minnelli
Southwood Plantation Road
Jeff Davis County Blues
Broom People
Age of Kings
Family Happiness
Out Scorpion Squadron
Song for Dana Plato
You Were Cool
Woke Up New
Seeing Daylight
Damn These Vampires
Home Again Garden Grove
Birth of Serpents
Plain (Silkworm cover with Tim Midgett from Silkworm)
Palmcorder Yajna
Encore 1:
Friend Catcher (The Birthday Party cover)
[That’s a lie. They actually played the Chicago friendly Cubs In Five, but Darnielle expressed that he didn’t want the other tour stops to know this, so he asked that we tell people they covered The Birthday Party. How killer would Friend Catcher have been though?]
Never Quite Free
No Children
Encore 2:
This Year (with Megafaun)
——

Live Review: The Mountain Goats and Megafaun in Chicago (4/5)