In 27 days, folks will be sitting in stop-and-go traffic on I-24 waiting to get into the Bonnaroo campgrounds. But once they do, they’ll be greeted to a four-day musical extravaganza featuring Eminem, Buffalo Springfeild, Arcade Fire, The Black Keys, Weezy, Widespread Panic, and about 150 others. Today, the festival revealed its official schedule so you can figure out which of these acts you’ll be seeing and thus when you can make a trip to Shakedown Street for those two for $2 Grilled Cheese.

As always the case, Thursday night gears more toward the festival’s up and coming acts, with Deerhunter, The Walkmen, Wavves, Best Coast, and Sleigh Bells among the highlights. Other notables include CoS favorites The Knux, rising MC J. Cole, Jack White’s wife (aka Karen Elson), The Drums, Dam-Funk & Master Blazer, Twin Shadow, and Henry Rollins, who teams with Tig Notaro and Nate Bergatze in the Comedy Theatre. As for conflicts? Well, The Walkmen are opposite Sleigh Bells and Henry Rollins, J. Cole plays against The Drums, The Knux face off against Best Coast, and Karen Elson and Wavvess will overlap. So, yeah, there are quite a few nasty ones.

If you’re one who doesn’t mind camping, then Friday would be the day to plop yourself at the “What Stage” as The Decemberists, My Morning Jacket, and Arcade Fire play back to back to back. But if you do roam around, other day time highlights include Florence and the Machine, Wanda Jackson, Matt & Kim, Atmosphere, Opeth, The Sword, and JEFF the Brotherhood. And then there are the late night sets, which see some heavy conflicts. Lil Wayne hits the “Which Stage” in the middle of Bassnectar and Big Boi’s respective sets. Then, around two in the morning, you have to choose between Pretty Lights and Ratatat. Good luck.

How’s this for a trio at the “What Stage”? Wiz Khalifa opens for The Black Keys who open for Eminem? Well, that’s what we have on Saturday. Over at the “Which Stage,” it makes a bit more sense as Mumford & Sons open for the recently reunited Buffalo Springfield. Other notables on day three include Loretta Lynn, Man Man, Deer Tick, Omar Souleyman, and Portugal. the Man. At night, Dr. John w/ The Original Meters and Allen Toussaint go against Bootsy Collins. WTF? After that, Girl Talk plays “This Tent”, STS9 holds down “That Tent”, and Gogol Bordello rocks “The Other Tent.”

The final day of Bonnaroo 2011 features sets by Robert Plant & Band of Joy, The Strokes, and Widespread Panic. It also sees The Strokes going against Explosions in the Sky, Beirut, and the festival’s iconic super jam, which might be worst conflict of the entire fest. 2009, anyone? Sunday also promises sets by Iron & Wine, Cold War Kids, Robyn, Gregg Alman, Mavis Staples, Nicole Atkins, and Ben Sollee.

Check out the complete schedule below, or via bonnaroo.com.

Four-day passes for the festival remain on sale, but organizers say they’ll be gone in a matter of days. Visit the festival’s website for more details. 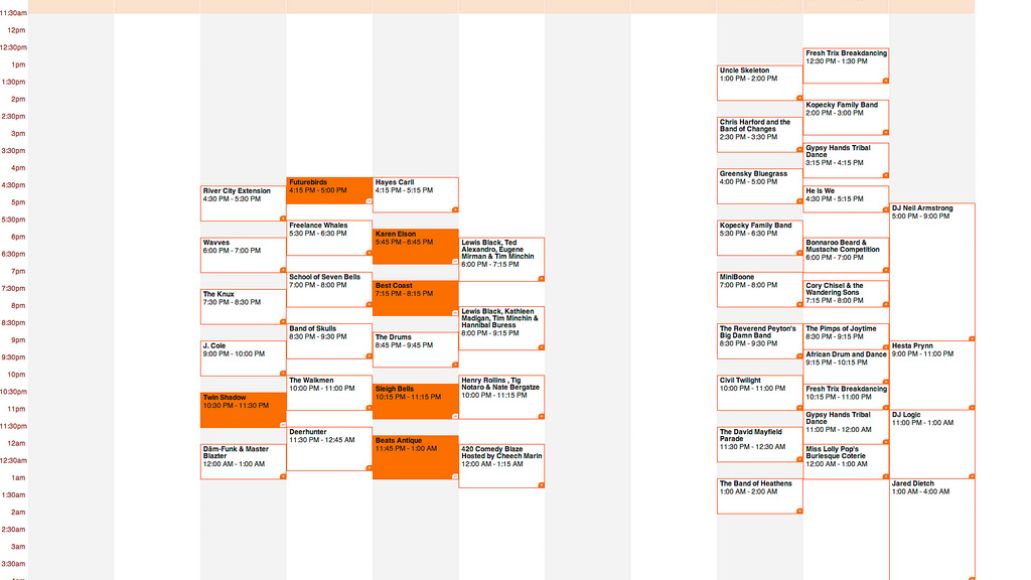 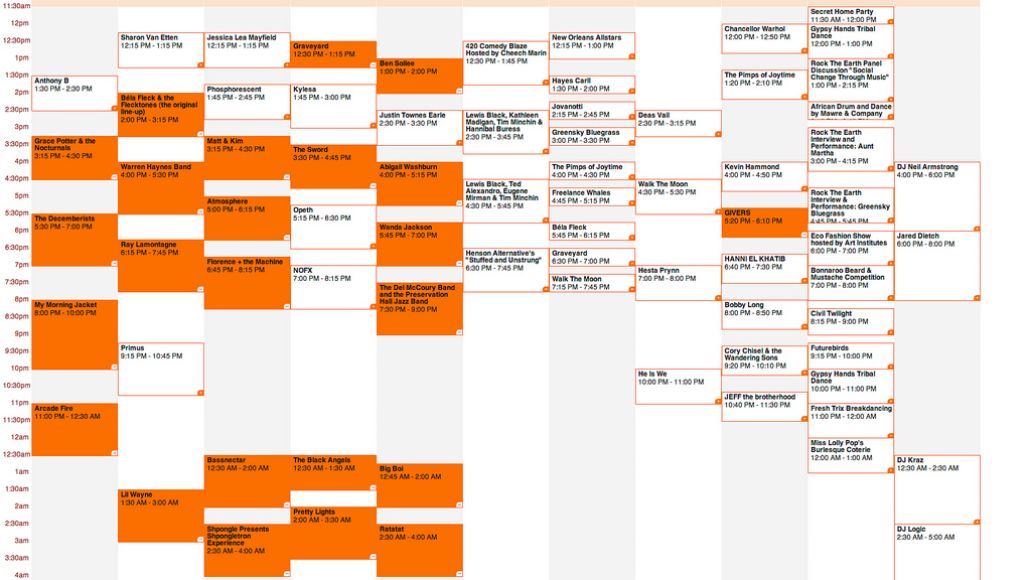 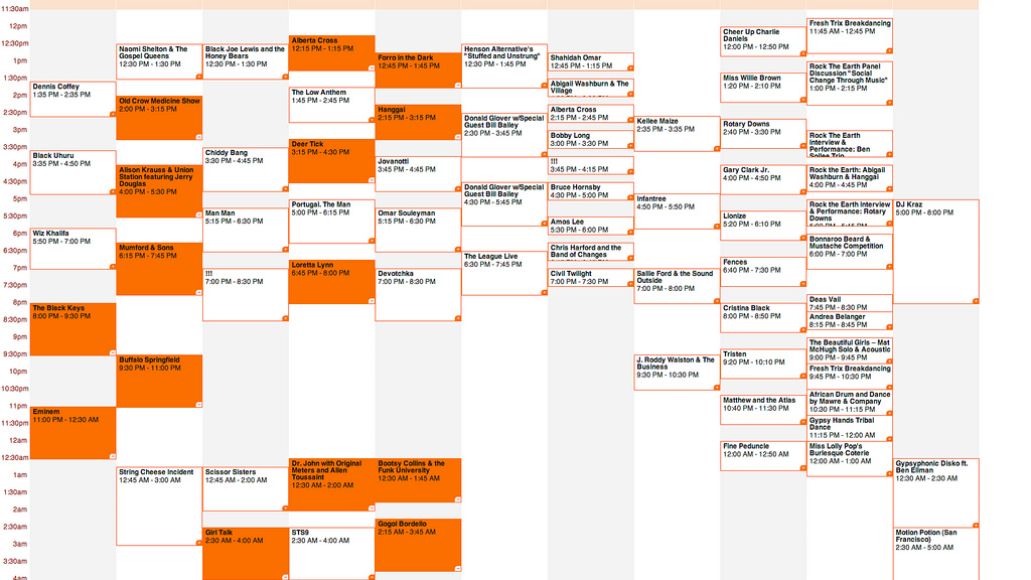 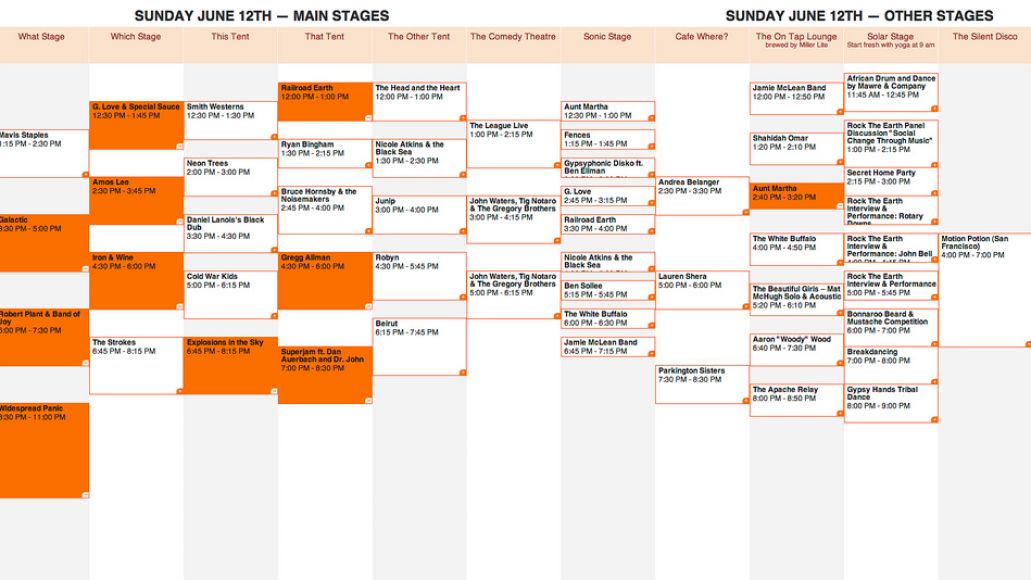