As music venues go, London’s Bush Hall is palatial in comparison to the usual matte black boxes that pass for gig rooms. The stucco ceilings and elegant chandeliers could equally be at home in a posh tearoom, and the atmosphere at this night’s Alessi’s Ark concert is such that you might just have stopped by to have a cuppa with the star. Alessi Laurent-Marke, aka Alessi’s Ark, chats to her audience like they are old friends, and you’re soon made to feel part of the family. It’s a very inclusive show, from introductions to her band members as early as the second song to the sight of her granny seated regally on the after-show merchandise stall.

This family theme begins with support act Georgia Seddon. The young singer-songwriter has an interesting connection of her own, as her dad is none other than Mike Heron, one half of pioneering ’60s psychedelic folkies The Incredible String Band. Tonight she alternates between a white, shrouded Roland onstage and a hefty grand piano to the side of the stage, which dwarfs her slender frame. At the piano, there are shades of Regina Spektor in Seddon’s high-range delivery, though she feels a bit less secure in the lower register. She starts brightly, coaxing chiming guitar sounds from the keyboard on “Bird” to match her sweet, ascending vocal. Her seven-song set has close affinity with the String Band in its minor key modulations and lyrical themes mostly drawn from the natural world. She closes with “Paths”, sweet-talking subtle effects from the keyboard that blend and lift the piece to greater heights. Her double-tracked vocal towards the end adds more beauty to an ethereal song, before she shyly exits to warm applause. 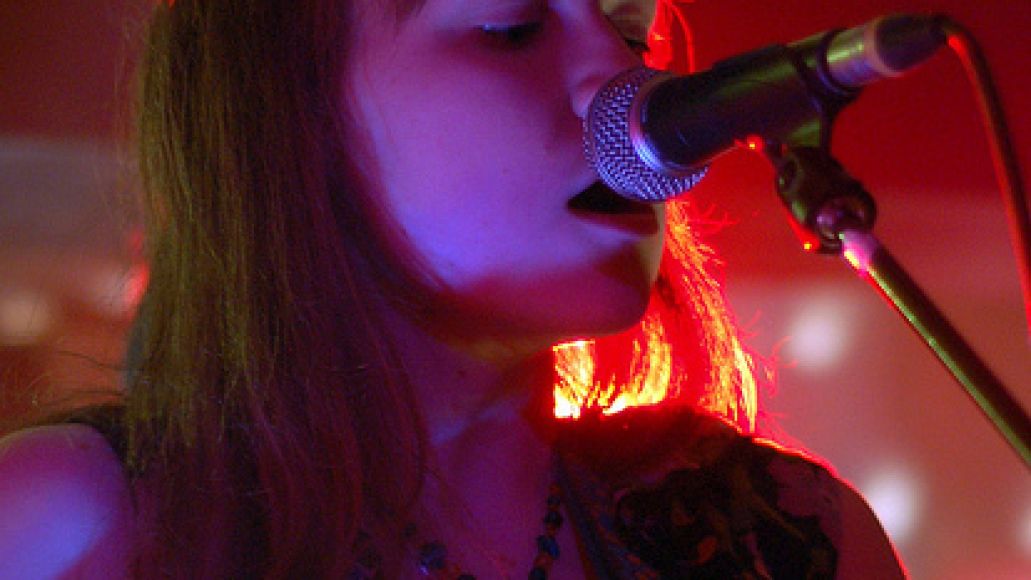 When Alessi’s Ark takes the stage, Georgia Seddon returns to play keys in a five-piece line fronted by singer-guitarist Alessi Laurent-Marke and backed by electric guitar, bass, and drums. Laurent-Marke later claims the two girls bonded over Percy Pig sweets and Costa coffees, quipping how even when they hit their twenties they both looked young enough for their parents to book family rooms in Travelodges. The singer is surprisingly tall and willowy sheathed in a floor-length blue dress with white flowers, yet still looks barely out of school. Sadly, her vocal is muffled on the opener, “The Dog”, and sound problems extend to an over-loud bass and some nagging feedback. Despite this, there are some real high spots in the first half of the set, from the smooth slide guitar on the Belle & Sebastian-like “On the Plains” and rocking conclusion to “Must’ve Grown” with an added bass-led coda.

The real high point, though, is Alessi Laurent-Marke herself. She commands the stage through an endearing mixture of charm, comic timing, and modesty that cannot fail to engage an audience. There are delightful girlie touches like decorating the stage with bits and pieces from her bedroom and having the setlist scribbled on a paper plate. You come in liking her and leave loving her. Thankfully, the sound improves greatly for two beguiling solo songs, “Witch” and  “The Bird Song”. Still only 20, Laurent-Marke may get held up alongside Laura Marling but a closer yardstick, should you want one, is Kate Walsh, although she confesses after the show that she hasn’t heard her. What distinguishes Laurent-Marke, though, are the unusual inflections in her voice that may come from her French mother’s side and add a touch of smoke to the youthful purity.

Unfortunately, the bass boom returns for the title track of her new record, Time Travel, but help is at hand with the arrival onstage of former Soft Boy Robyn Hitchcock, resplendent in a paisley shirt and sporting a mop-top of graying hair. This is a cue for a lengthy digression, as Laurent-Marke gives a rambling account of how she knows Hitchcock, how she knows the band members, how they know each other. The audience laps this up but are maybe none the wiser at the end given the singer’s habit of straying off-mic to pick things up while delivering such asides. Hitchcock plays a sparkling, fluid guitar intro and delivers an assured vocal on one of his songs, the title of which was lost to me off-mic and then adds some brisk strumming on Alessi’s Ark tune “The Horse”.

Hitchcock’s cameo brings a much cleaner sound, which remains throughout the rest of the show, allowing Laurent-Marke’s vocal to shine on her assured Lesley Gore cover, “Maybe I Know”, and the bewitching “Hummingbird”. The band is then given rein to rock out on the closing segue of “Asteroids Collide” and “Run”. Finally, “The Robot” provides a lilting encore lit up by some Harrison-esque guitar licks. The houselights come on a mite too quickly, but the audience leaves content in the knowledge that they have been guests at a rather special tea party.

Alessis’s Ark setlist:
The Dog
On The Plains
Wire
Must Have Grown
Witch
The Bird Song
Time Travel
Madonna Of The Wasps
Robyn Hitchcock song
The Horse
Maybe I Know
Hummingbird
Asteroids Collide/Run
Encore:
The Robot