There’s a spot right at the beginning of Steve Reich’s landmark percussion work, Drumming, where you might think the performers messed up. After two percussionists gradually build up a rhythmic cell that forms the basis of the entire work – a thick, polyrhythmic groove – one of them suddenly seems to lose the beat. For a moment, it’s chaos, and you get that vicarious tinge of embarrassment when you witness someone fuck up. Until you realize that Steve Reich wanted you to feel that way, wanted you to feel out of phase, dislocated from the beat. And then you realize just how good these performers really are.

Reich has been getting a lot of play time in the New York City classical music world this year – the year of his 75th birthday. It’s been a multi-venue celebration that has gone from the cocktail-scented downtown world to the hallowed space of Carnegie Hall. At the center of it all are the pieces that form the most powerful statement of Reich’s unfailing and unfathomable talent: Music For 18 Musicians, Different Trains, Tehillim, Double Sextet, and Drumming. Each of these pieces represents either a culmination, or a breakthrough moment, of a period in Reich’s development. Drumming, written in 1971, is the apotheosis of Reich’s earliest experiments with percussion and phasing, standing at more than an hour long. Sunday night at (Le) Poisson Rouge in the Village, the wildly talented Axiom Ensemble squeezed everything they could out of this modern percussion classic.

First and foremost, Drumming requires an uncanny rhythmic sensibility and acute percussion chops, a description that accurately describes the percussionists of Axiom, Julliard’s vanguard new music group. The African-inspired polyrhythms of the opening part – in which the piece’s main ostinato is build up one note at a time – can thwart the efforts of even the most metronomic of Western musicians. Not so with Axiom. They glided through these complex rhythmic units, making them sound natural and unforced, an organic percussive beast. Most impressive were the phasing moments, where Reich sets up multiple players at the same rhythm, and then gradually increases one player’s tempo until they go “out of phase” with the other. Eventually, they speed up enough to catch up to the groove, now one beat ahead. 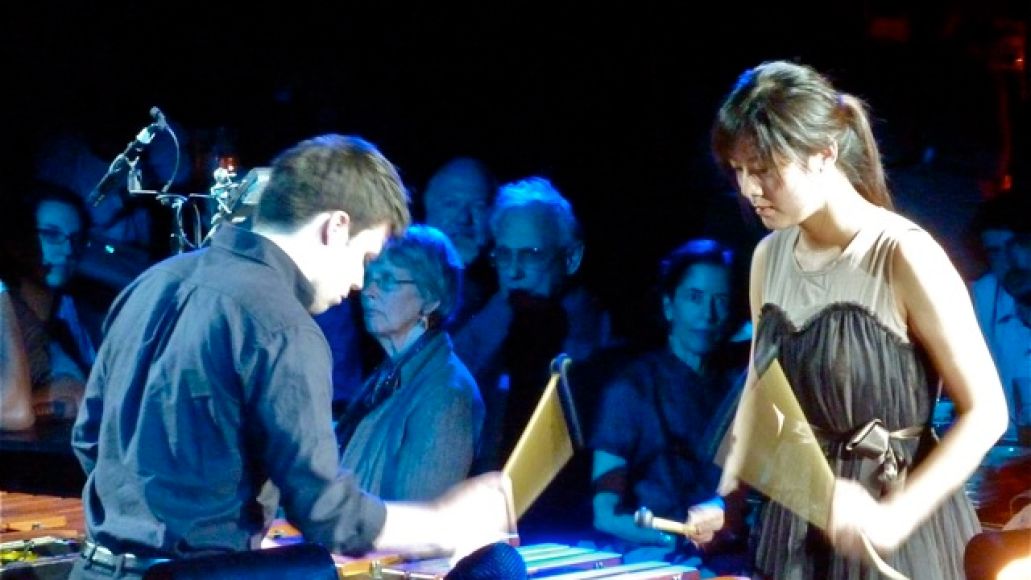 It’s an impressive feat that Reich originally discovered using tape loops and electronics, and only later applied to live performance. Losing your focus for a split second during these phased passages, or trying to match your part to another player, results in the whole thing falling apart. Yet Axiom showed no hiccups in their navigation through these sections, allowing the groove to devolve into cacophonous disarray for a few seconds before it all clicks back into sync, highlighting the elliptical nature of this music.

Drumming is split into four parts, each featuring a different instrumental palette of tone color. The opening is for tuned bongos, sounding much like the drums of Ghana’s Ewe tradition where Reich studied in the early ’70s. Part two is for marimbas, at times featuring all nine percussionists clustered around three instruments, some of them playing upside down as they attack from both sides. Part three is for glockenspiel, the metal, bell-like xylophone instrument, while part four combines all three. Additionally, parts two through four are accompanied by two voices, one of whom doubles as a whistler, and a piccolo.

Axiom’s virtuosity was on display especially during the transitional passages between parts. Drumming never comes to a complete stop; it keeps its pulsating beat going, even if it gets reduced to just one note. As the players gradually fade out one timbre, the next one eases in, somehow matched to the former so that the changes in tone color are gradual metamorphoses of sound. Somehow, Axiom managed to merge the pointed snap of the bongos with the woody roundness of the marimba. These moments were seamless segues, and showed the care this group has to listen to each other and manipulate the sound of their instruments with incredible versatility. 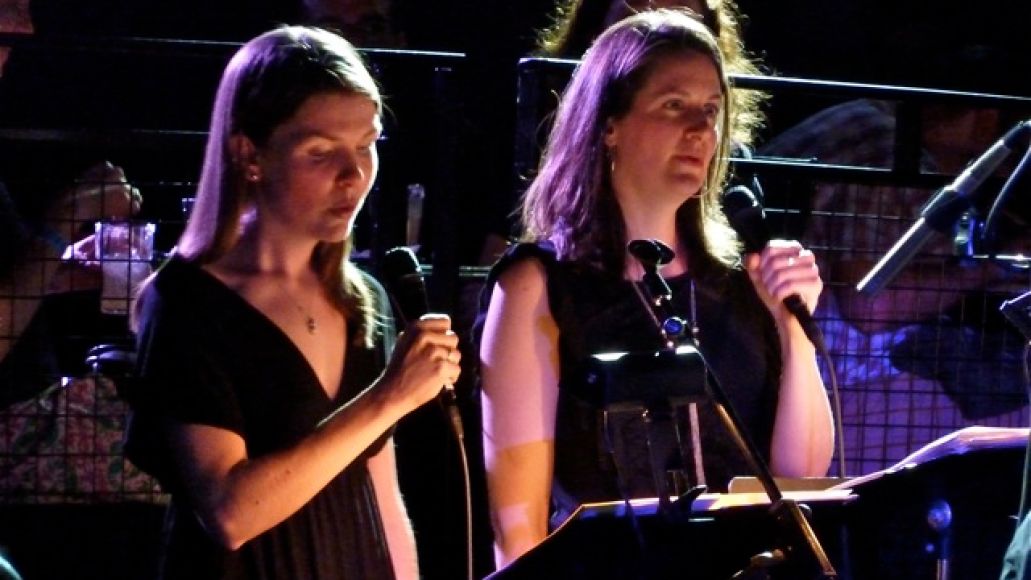 The voices serve an integral part, highlighting rhythmic fragments and creating composites from multiple players’ rhythms. Soprano Kate Mulvihill and whistling goddess Emily Eagen’s ethereal voices sounded like ringing overtones above the marimbas, a hypnotic halo of sound that swirled above the crowd. Drumming plays tricks on the ear. As rhythms repeat, new rhythms seem to emerge out of the melee of notes, as the ear latches onto short snippets of melody and rhythm. For their part, Axiom tried to minimize the tendency for certain musical ideas to stick out, but the ear hears what it wants. Eagen’s otherworldly whistling and Mulvihill’s clear voice blended perfectly into the percussive texture, and were most noticeable when they stopped singing, and you think to yourself “wait, something just changed….”

In the flawless group transition to part three, the highest register of the marimbas gives way to the ringing metal of glockenspiels. Whether it was the microphones or just the natural sound of the bells, this third part soon became a wash of metallic ringing, with each stroke sounding like percussive punctuation. The mind mischievously separates the tone from the attack, and a psychedelic swirling of sound dominates the texture. Only in part four do all the timbres come together, achieving a fully saturated and variegated sound, until the groove that has become so familiar abruptly ends. Axiom nailed this moment, stopping on a dime and leaving the last few notes ringing in the silence, which was only cut by the massive ovation that followed.

Works like this are becoming more and more performed due to the proliferation of talented percussion groups such as So Percussion, but also the talented percussion sections of modern chamber groups like Alarm Will Sound, eighth blackbird, and Axiom. Still, the performers would be nothing without the young audiences who relish this newish music (Drumming is already 40!) that is so much closer to our modern pop sensibilities than Mozart or Liszt. It’s music that is complex and heady, but that you can groove along to in your seat. With the success of minimalist music so far in New York this season, Reich couldn’t be getting a better birthday present.

Steve Reich’s Pulitzer-winning Different Trains will be performed Tuesday, May 10, at Carnegie Hall, and repeated for free on Thursday, May 12, in the Bronx.
—— 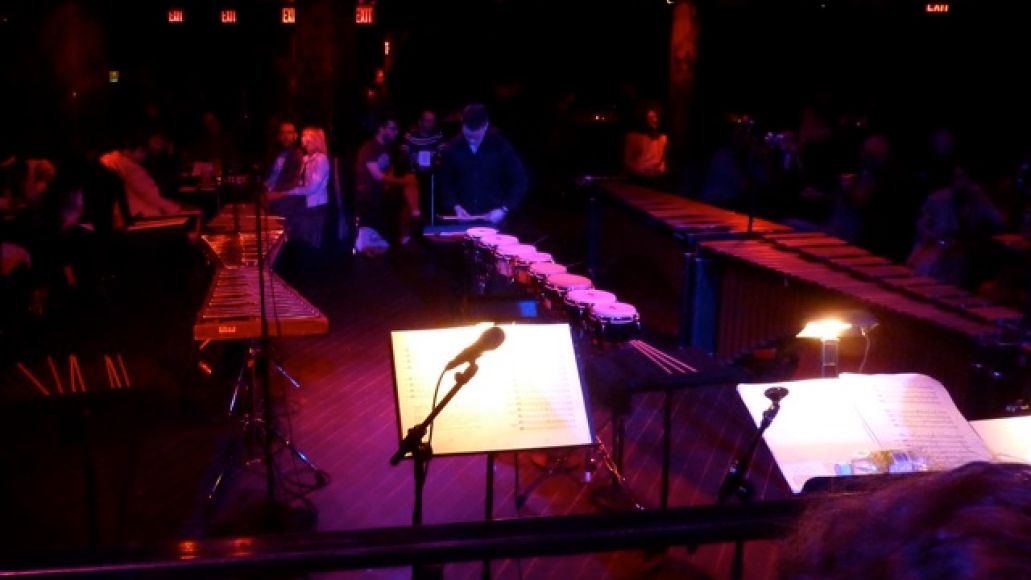 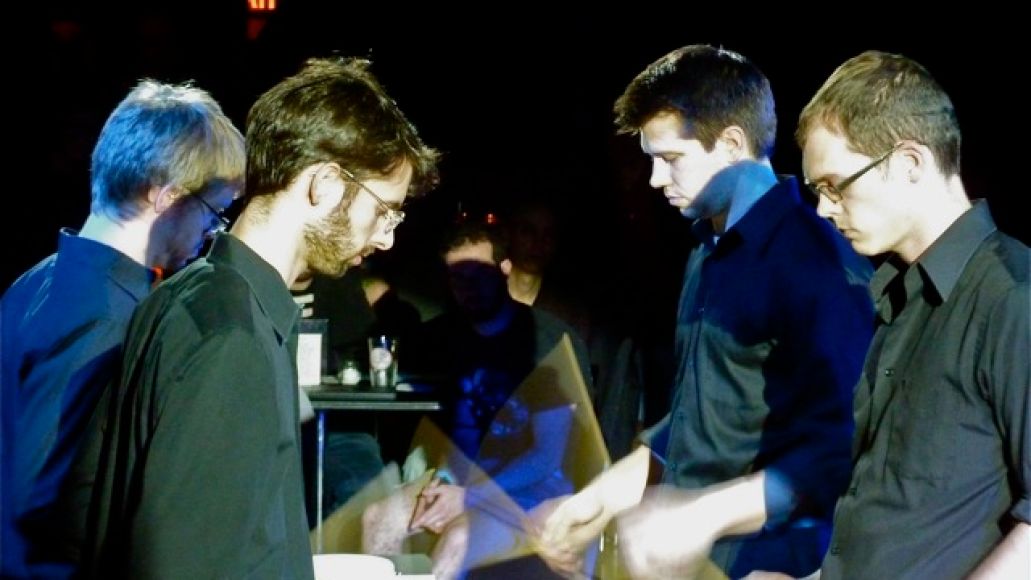 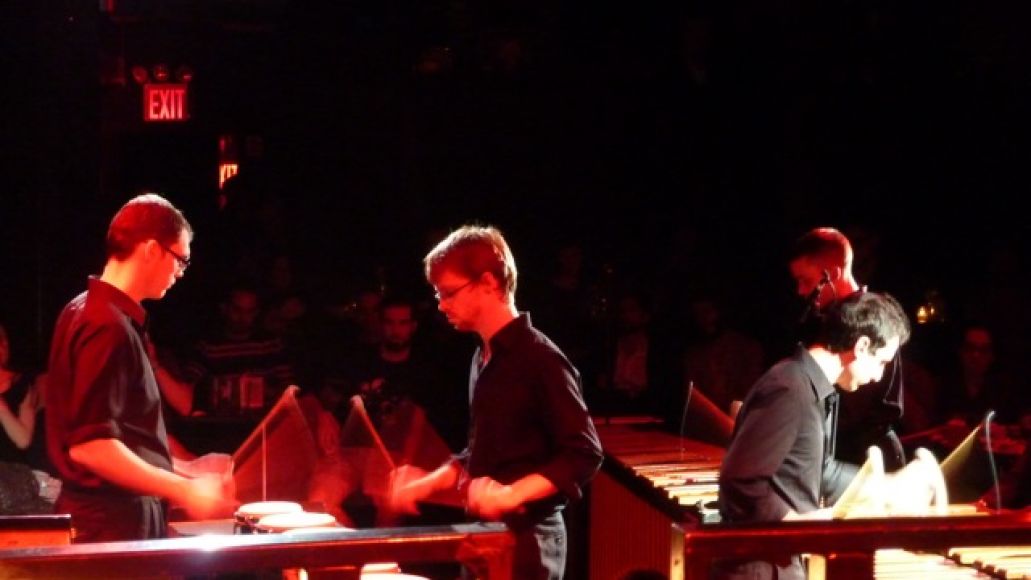