While many decry the use of the term “post-rock”, it’s hard not to draw parallels, both musical and non-musical, between Explosions in the Sky and many of their post-rock peers. Yes, there’s the oft-noted expansive nature of the music, and the widescreen rendering of said music. But it’s interesting to note, in addition, that most everyone who has been saddled with the post-rock tag is marked by a certain disconnect from the time-worn paradigm of rock ‘n’ roll stardom. Rather than concern themselves with garish displays of showsmanship and self-indulgent 20-page exposés, 10-minute extended pentatonic minor solos, and inter-band squabbling over which brother gets to sing lead on their next single (or even, to be sure, any singles at all), most post-rock acts — Explosions in the Sky, included — stay out of the spotlight, opting instead to just make incredible music. In more ways than one, the Austin ensemble seems to be among the harbingers of a new era in rock music. Throughout their stellar set at the Hollywood Forever Cemetery this past weekend, which easily ranks among the most beautiful nights of live music I’ve ever witnessed, their (closest thing to a) frontman, guitarist Munaf Rayani, spoke only twice: once at the start of their set, and once at its end, allowing the music to literally speak for itself. And speak it did. Very loudly.

Openers Papercuts brought their reverb-drenched tunes to town Saturday night, playing to a sold-out house (if you could call a crowd of picnickers in a cemetery that). Their music — a pleasant midpoint between dream-pop and surf rock — served as a fitting complement to the beautiful sunset and light breeze behind them. The San Francisco-based quartet’s warm tones and frontman Jason Quever’s soft vocals were rounded off nicely by David Enos’ keyboard lines and the occasional auto-harp part. 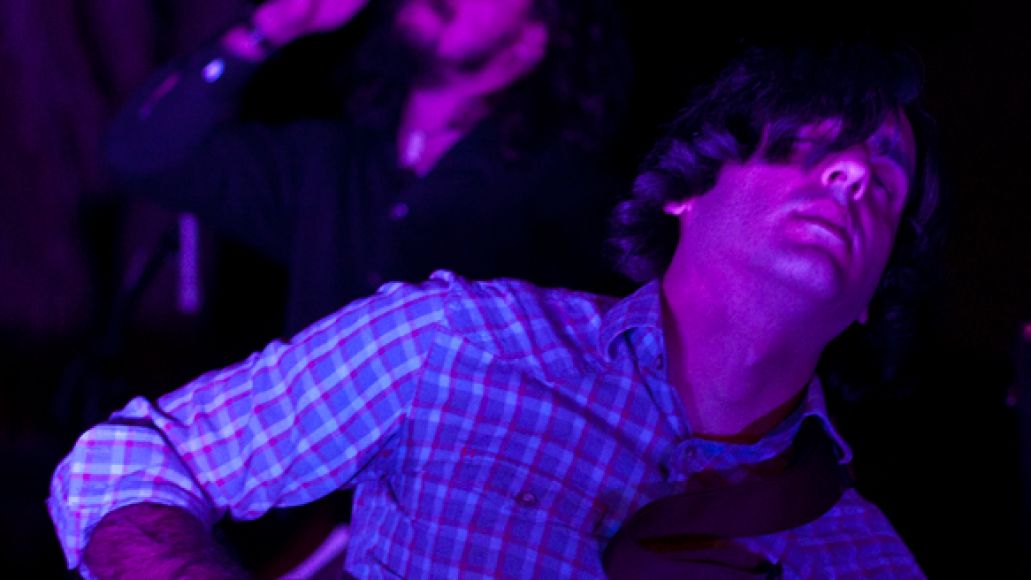 Explosions in the Sky took the stage promptly at nine, a rare treat for the Los Angeles crowd all too used to stage delays. After thanking the crowd for coming out and inviting the audience to join him in making ghostly noises, Rayani stepped away from the mic and began picking out the tentative, chiming opening to “Postcard from 1952”, a standout off of the just-released Take Care, Take Care, Take Care. Guitarists Michael James, Mark Smith, and Rayani traded lead parts, while a touring bassist/keyboardist provided the rhythmic backbone along with Chris Hrasky on drums, who came in pounding when the song finally broke through to high heaven in one of the band’s typically exuberant climaxes. Calling their performance cathartic would be a grave understatement. When James moved from the smashing end to Take Care‘s first single, “Trembling Hands”, into the shimmering opening to “Your Hand in Mine”, the inscrutable looks on he and his band members’ faces cast the beautiful flurries of notes in an especially haunting light. By the time the song finally crested in its breathtaking peak, it’s safe to assume that there wasn’t a dry eye in the crowd.

There’s something to be said for the manner in which Explosions in the Sky bring their evocative songs to life; indeed, the fact that the quartet managed to turn a set of 10-minute instrumental jams into a positively crowd-pleasing performance is in a great feat in its own right. The musicians themselves cut mystic figures against the dark sky, any otherworldly aura they gave off was no doubt magnified by the performance’s supernatural backdrop. Even as they were aided by no sort of visual frills (indeed, nothing aside from a fluttering Texan flag, which hung from an amp cabinet) and very minimal lighting (much to the chagrin of my photographer friend), the quartet moved like men possessed: Munaf Rayani alternated between sitting crosslegged in front of his pedalboard, his eyes closed, once slamming a pedal into effect with a raised fist, and standing hunched over his low-slung guitar. Mark Smith, who seemed most content with hanging back in his corner of the stage, was easily the most stoic of the four, occasionally thrashing at his guitar in the show’s more gripping moments. Michael James, who stood center stage, seemed to anchor the music, his face often contorted in complete absorption in the music, with good reason. Their harmonic tracks rely heavily on impeccable timing; had he come in a second late with his part of the lurching riff that kicked off set closer “Greet Death”, his flub would’ve been painfully audible. It’s hard to imagine the kind of synchronicity it must’ve taken to stay that in sync for a whole song, let alone the entire concert. 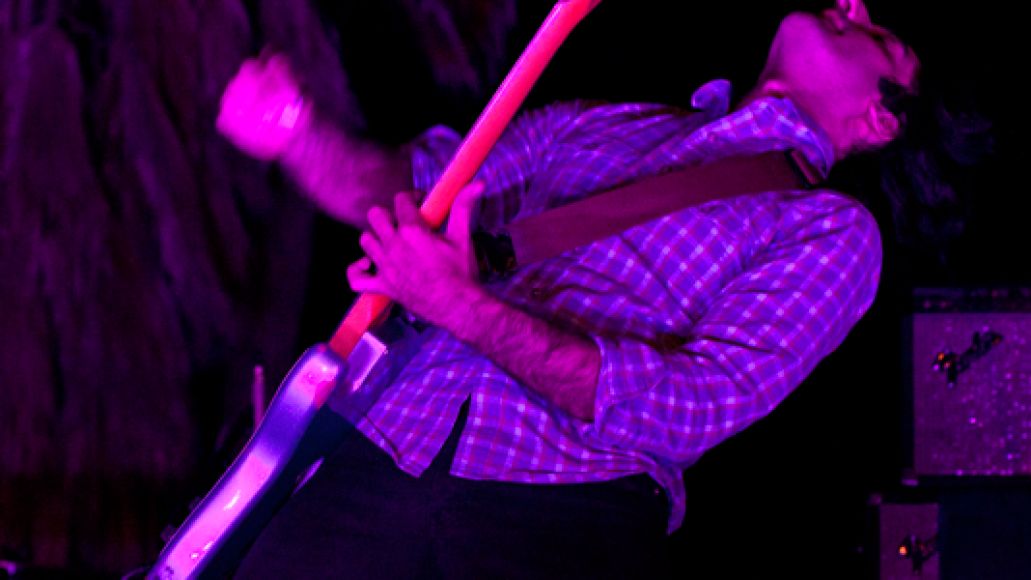 When the music finally came to a grinding halt — almost exactly 90 minutes after it had began — everyone in attendance took awhile to get used to the sudden silence, in a manner not unlike people in a room whose lights have suddenly been switched on without warning. Rayani, the band’s sole spokesperson thanked the crowd for sticking around, openers Papercuts for supporting and the cemetery and its occupants for hosting us all, calling the night “one of the most beautiful things they’ve ever been a part of,” and promising to be back soon. I sure hope so.

Explosions in the Sky setlist:
Postcard From 1952
The Only Moment We Were Alone
Trembling Hands
Your Hand in Mine
The Birth and Death of the Day
Last Known Surroundings
Catastrophe and the Cure
Let Me Back In
Greet Death
——

Live Review: Explosions in the Sky in Hollywood Forever Cemetery (4/30)